"But masks don't heal wounds. They only hide them." 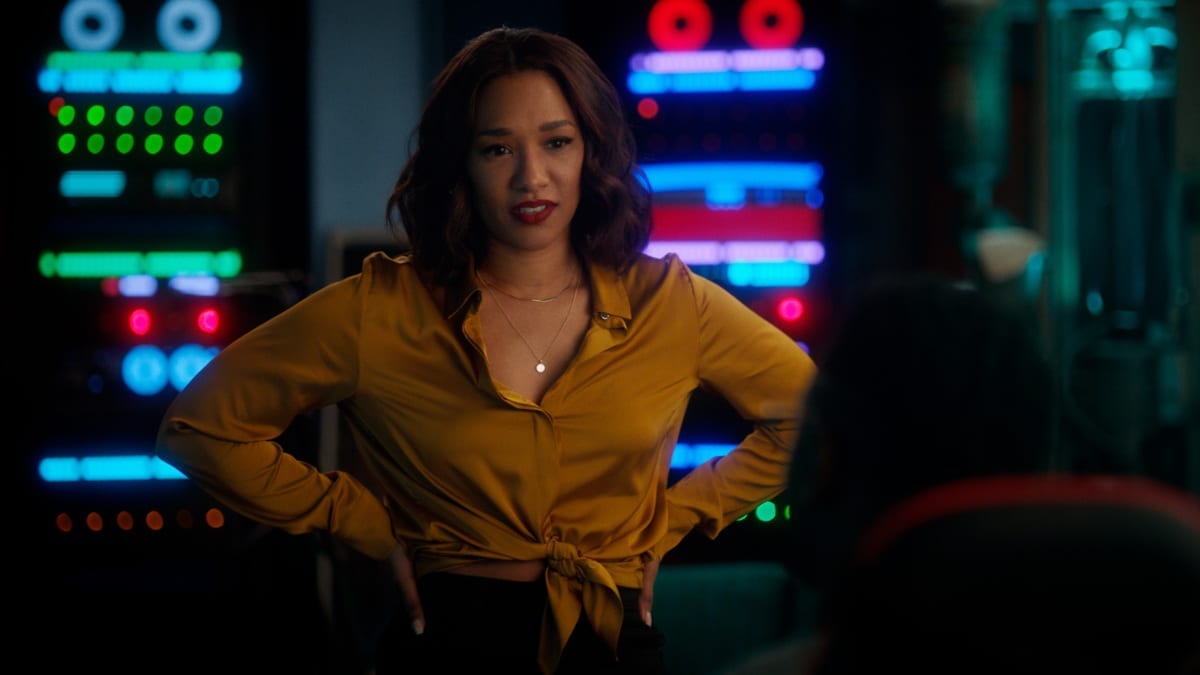 While watching “Masquerade,” I got the impression The Flash was either trying and failing to assure us that we wouldn’t miss Cisco or rubbing our nose in losing our avatar by showing us the cavalcade of suck with which he’s been replaced. And, to help things along, they made it extra boring; this episode is an endurance trial, the perfect tool with which to test your narcolepsy medication.

Cecile is tormented by the mysterious figure in the mirror from the end of “Good-Bye Vibrations.” Chester uneasily settles into his role as Cisco’s replacement. Joe investigates Kristen Kramer (or so we’re told). Barry and Iris attempt to have fun and are stopped by Chester in a perfect distillation of this episode and what we can probably expect from the show from now on.

“Masquerade” begins with Joe and Cecile adjusting to their new lives. Joe is retired and is feeling the pangs of regret now that his department is in someone else’s hands – and, particularly, in the hands of someone he believes is abusing her power and leading the police force down a dark path. And Cecile has left the district attorney’s office to become a defense lawyer, defending metahumans who don’t get a fair shake from the court system. Serendipitously, Cecile’s newest client has ties to Kramer, which gives Joe a new lead on his off-the-books investigation. This seems like a potentially interesting plotline, doesn’t it? If only the producers thought so because it quickly vanishes in favor of a rehashed story about self-doubt and rising above it.

Cecile, you see, is trapped in a white room (with black curtains in the station; just kidding) inside an insane asylum, which is really a part of her mind, or of the gold mask she saw in the mirror. “Masquerade” doesn’t make it clear which is happening, but she’s no longer in the driver’s seat of her body. No, it’s Psycho Pirate, who was last seen in the mess into which the CW turned “Crisis on Infinite Earths.” And it isn’t long before Psycho Pirate traps Barry in his mask or Cecile’s subconscious or another dimension or wherever. Does it feel like The Flash is doing everything it can to sideline the Flash lately? It seems like he’s around less often than usual, and when he is, he feels more like a supporting character than the lead. The climax with the Forces was more about them than it was him, for example. And when the big showdown with Eva took place, Barry stood around and did nothing while Iris told Eva how important it is to hug. This all comes after they took his speed away (again) for several episodes. It’s getting tiring.

And it’s felt even more in “Masquerade” because the focus is on Cecile, Chester, and a returning Sue Dearbon, who was missed about as much as an ingrown hair. Cecile and Chester are at least thematically relevant; they’re both feeling insecure, and Psycho Pirate is able to use those insecurities to his advantage. Cecile is haunted by the memory of allowing her mother to die alone while she furthered her career, and Chester knows that he’s no Cisco, so he’s eager to prove himself to Team Flash. It’s trite, it’s dull, and the characters and actors who have to sell it aren’t up to the task. Cecile has never shown any indication of her self-loathing over her mother before, so it feels like it was thrown in to give her something to do while Psycho Pirate inhabits her body. And Chester’s worry fails to resonate because we all know he’s right; he’s an annoying guy we just met last season, and he’s replacing a character we’ve loved from the beginning. It’s almost inevitable when a series regular is replaced that the show will devote an episode to informing the audience that the dimestore version is our new favorite character (I was so mad at The Orville when they did this to my beloved Alara), but Chester is so bad that it grates even more than usual. 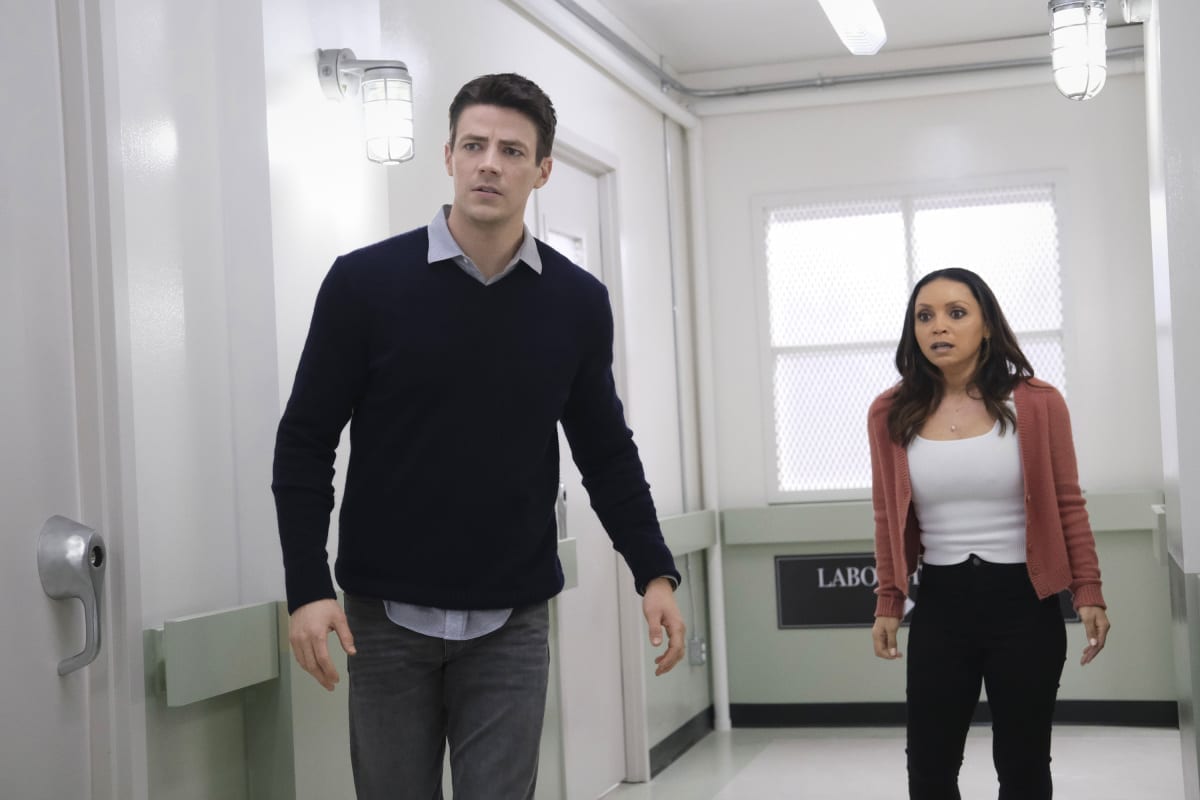 Nothing really comes as a surprise in “Masquerade.” Chester makes a mistake, then rises to the occasion and helps save the day, after which Barry and Iris inform him that he’s totally a member of the team now. Cecile faces her past selfishness and refuses to let it define her, then shoots a sunbeam laser at the evil manifestation of her possessed body (where the sunbeam lasers come from, I have no idea, and I get the impression no one who’s in a position to explain them cares). Sue Dearbon is present because Team Flash decides they need to break into the museum housing Psycho Pirate’s mask and steal it so he can’t get it. She lifts right out of the episode, although it’s funny watching her have to explain why Ralph isn’t around and make us forget that it’s because of decade-old tweets. All of these characters are lame, and the actors who play them are hammier than a trough full of pigs, lest we forget how funny and sassy we’re supposed to think they are.

What makes “Masquerade” worse is what was sidelined in favor of this story. Joe investigating Kristen Kramer sounds much more interesting than Cecile’s mommy issues, but after he gets his first lead, he disappears for the entire episode, only showing up again at the end to tell us what he found. Why not make this the main plot, and have Chester (since I suppose he must be present) screw up there so he can doubt himself? Aside from Joe being a great character played by an excellent actor, Kramer is a potentially fascinating villain, especially since she’s probably not completely evil and even has a valid point of view. It looks like she may be all the way bad now, but I wouldn’t be surprised if this is misdirection. I’d like to see Barry and the other go up against someone who isn’t trying to kill anyone or take over the world, but who is doing a different kind of damage, one they can’t necessarily fight their way out of to win. If they insist on doing away with super-battles, this would be more interesting than forgiving murderers because of flower power or whatever. I did like the subplot where Barry and Iris are having lots of sex because they want to start a family, but in what is too perfect to be a deliberate meta-joke, Chester ruins that too and later chides them for doing it at the lab. Does it surprise anyone that he’s this big a buzzkill? Also, you have to feel bad for Danielle Panabaker having to pretend she’s entertained by that idiot. Depending on how next week goes, “Masquerade” may prove to be entirely skippable, although I can’t imagine too many people wanting to re-watch the later seasons of The Flash.

“Masquerade” is a boring episode about some of the worst characters The Flash has ever seen. Barry is sidelined again, Chester and Cecile learn obvious lessons in the most rote ways possible, and a potentially interesting storyline is moved aside to make way for it all. I’d suggest turning your phone off so you don’t get distracted, but it might be the only way you’ll stay awake.

“Masquerade” is a boring episode about some of the worst characters The Flash has ever seen. Barry is sidelined again, Chester and Cecile learn obvious lessons in the most rote ways possible, and a potentially interesting storyline is moved aside to make way for it all. I’d suggest turning your phone off so you don’t get distracted, but it might be the only way you’ll stay awake.