REVIEW: The Flash – Season 7, Episode 6 “The One with the Nineties” 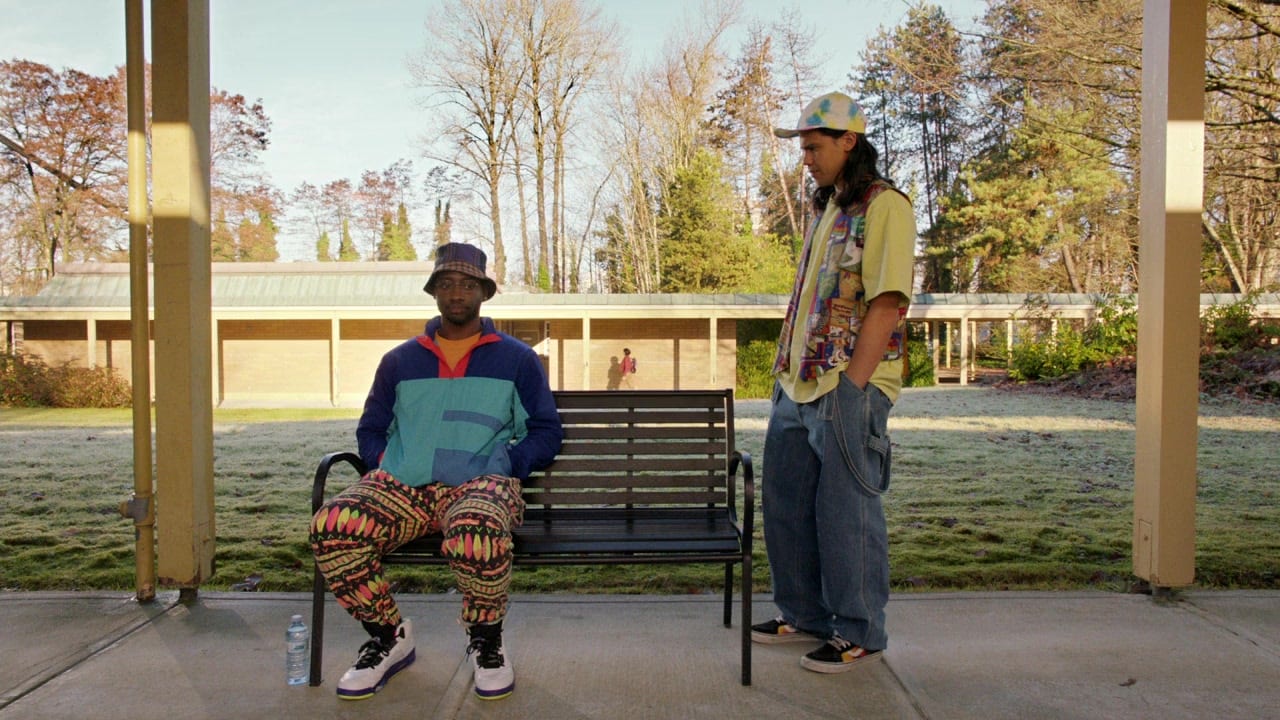 I’m starting to sound like a broken record, but “The One with the Nineties” is another okay episode of The Flash. What stings is, it should have been great, and parts of it are fun and inspired. There’s even a genuinely touching moment centering on a character I don’t particularly like. But there are also some dumb lines, potentially interesting storylines that are neglected, and yet another subpar villain that keep it from realizing its potential.

While Barry convalesces, Cisco and Chester test a new invention that will detect Psych and Fuerza, only to find themselves trapped in 1998. Caitlin adjusts to life with Frost as her roommate. Iris tries to bond with the Speed Force, who worries about the harm she may be causing Barry. 90s references abound.

Initially, “The One with the Nineties” clears up some things about what’s shaping up to be the season-long arc. The Speed Force explains that Fuerza and Psych are other elemental forces similar to her, ones representing physical strength and psychological fortitude (respectively) in the way she represents speed. That’s good to know because it’s been a bit too hazy so far, and not in the good way that creates mystery; it’s rendered the last two weeks confusing. And now that they know what they’re up against, Chester has created a device that should alert them to Psych and Fuerza should they return to finish off the Speed Force. A test of the gadget, however, leaves him and Cisco dealing with some unintended side effects.

When the glowing lights stop glowing, Cisco and Chester are transported to Chester’s hometown – in 1998. “The One with the Nineties” then becomes a highly comedic episode, wringing jokes out of references to the past. Surprisingly, they mostly work; these sorts of gags can wrong easily, but The Flash manages to make each one funny. There’s also an authenticity to them I didn’t expect from a CW show. For example, one of the first clues that they’re in the past is a Blockbuster sitting in the middle of town. On the marquee is an ad for Space Jam, which is an obvious reference (and probably a bit of cross-promotion for the upcoming sequel nobody outside of LeBron James’ ego asked for); however, the posters on the Blockbuster are for Practical Magic, Sphere, Fallen, and Why Do Fools Fall in Love? Those are much more obscure movies (except Practical Magic if you enjoy pumpkin spice lattes in the fall), and they all came out in 1998. Instead of going for an obvious sight gag, the show makes one that’s truer to reality, and it helps sell the time-travel premise. I also laughed out loud when Cisco and Chester bought clothes to blend in and ended up looking like caricatures from A Different World rather than how any normal person would dress; I wish they’d gone further with this and had someone comment on it.

Chester ends up being the focus of “The One with the Nineties,” and when I realized that, I deflated. I don’t care for Chester; he feels like Cisco-lite in the way that many of the newer Arrowverse characters feel like watered-down versions of existing ones. But, to my surprise, he was quite good this week. He has some bad jokes early on (“Asking for a friend;” how desperate were they to give him something to say?), but those eventually give way to a storyline that humanizes him in a way all the half-baked pop culture references in the world can’t. The day to which he and Cisco are transported is the day before Chester’s father died, and to rub salt in the wound, his dad buys the last piece they need to build some new doohickey. Unlike Barry, who’s had two dads that loved him, Chester’s always felt that his father didn’t care about him and that he neglected him to focus on his inventions. But, in a heartwarming scene (albeit with some clunky dialogue; why would Chester’s father ever talk to a stranger about these things at such length?), Chester sees his dad in a new light, removed from the situation and able to talk to him as an adult. Like Howard Stark told Tony in a video (the MCU allusions are flying fast and furious this season), Quincy Runk inadvertently tells his son how much he always loved him and how his life has been devoted to raising a good man. If they can maintain this characterization from now on – and ease up on the awful humor – Chester could grow into a likable guy. 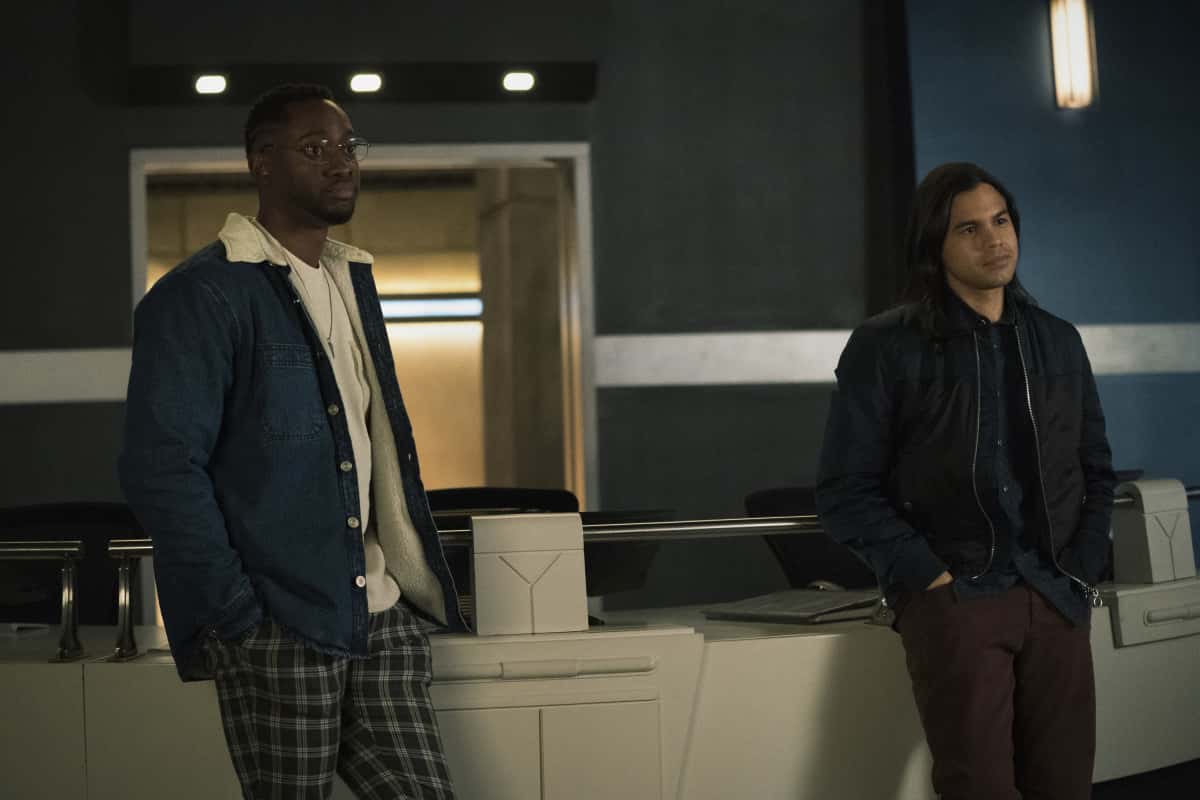 “The One with the Nineties” is a dud in the villain category, though, and they’re up against another of the elemental forces. This time, it’s the “Time God,” a high school jock named Deon who peaked in his teenage years and wants to live his best day over and over again rather than return to his bleak future. This is where things get confusing. If Deon, Psych, and Fuerza are all these cosmic forces, how is the Time God also a regular guy? I can understand it taking Deon’s form, but the plot of this episode doesn’t make sense unless he actually is Deon. Does this mean the forces are possessing regular people? If so, why are the other two trying to destroy the Speed Force while Deon just creates his own Groundhog Day? Maybe they’ll explain this better down the line, but for now, it doesn’t gel. Deon is also an underwhelming villain, making these forces a wash at this point. And since they’re all still out there, I hope there’s a bigger villain in control of them all, someone who feels like an all-powerful entity instead of just an annoying punk.

The rest of “The One with the Nineties” is barely there. The brief gag where the rest of the cast get makeovers from decades past is funny, although I wish they bought the rights to “Let the River Run” for Caitlin’s 80s business lady look. Caitlin and Frost going through roommate growing pains is a fun idea, but it’s over too quickly to mean anything. I imagine there will be more of it in the near future, but it makes no impression in this episode. Iris comforting the Speed Force marks another week of the show trying to find something for her to do, but there’s a little more under the surface if you look hard enough. Bonding with her mother-in-law is something Iris will never have, and when she explains to the Speed Force that looking like Nora helps comfort Barry more than it hurts him, I suspect she’s talking a about herself too. I hope they explore this a little more as well, and since the Speed Force is moving in with Barry and Iris, there should be ample opportunity. And the stinger looks to set up next week’s episode. Frost just won a level of freedom she never thought she’d see, and now some government flunky is coming to take it away, and she’ll be damned if she goes down without a fight. I’m glad they’re still going to test Frost’s resolve to turn away from evil; it’s easy to do when you’ve got no skin in the game. 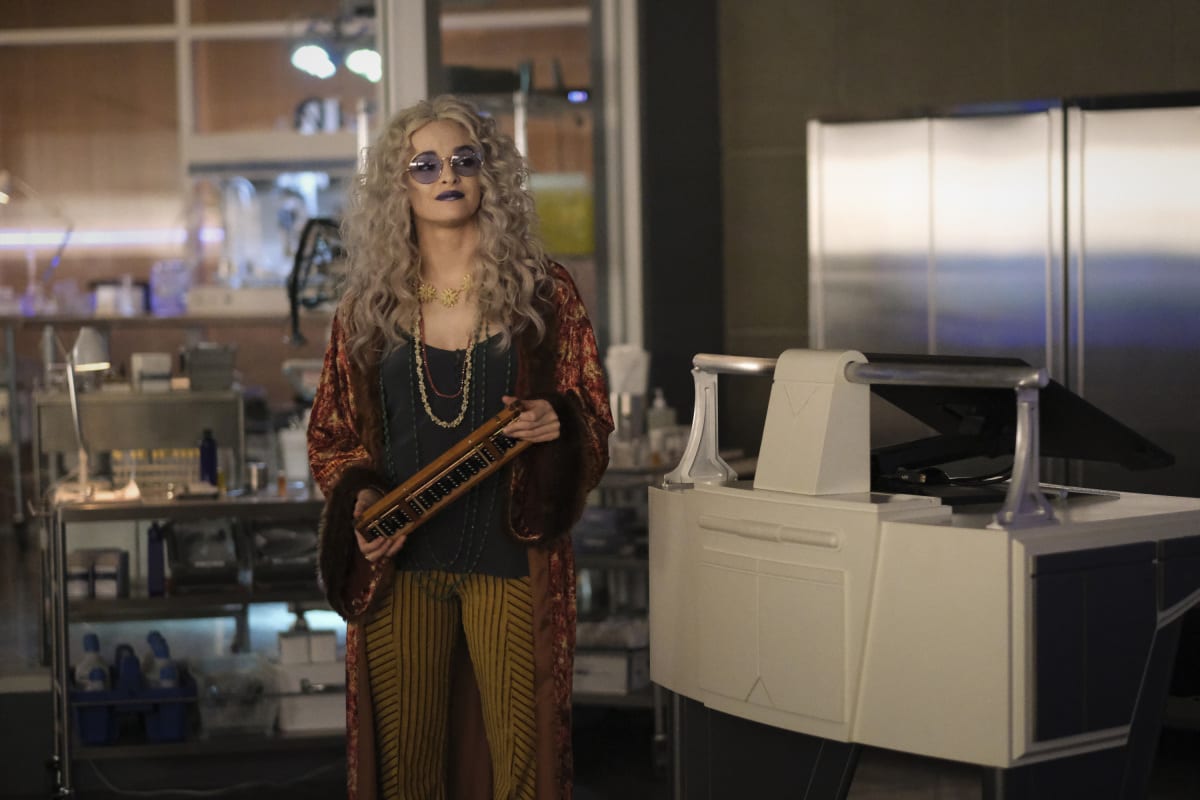 “The One with the Nineties” is not too bad. Chester becomes an actual character, and the time-warp premise is milked considerably well. The subplots fall too far by the wayside, some of the early jokes miss their marks, and the villain is another stinker, but this is better than the last couple of episodes.

The Flash – "The One with the Nineties"

“The One with the Nineties” is not too bad. Chester becomes an actual character, and the time-warp premise is milked considerably well. The subplots fall too far by the wayside, some of the early jokes miss their marks, and the villain is another stinker, but this is better than the last couple of episodes.