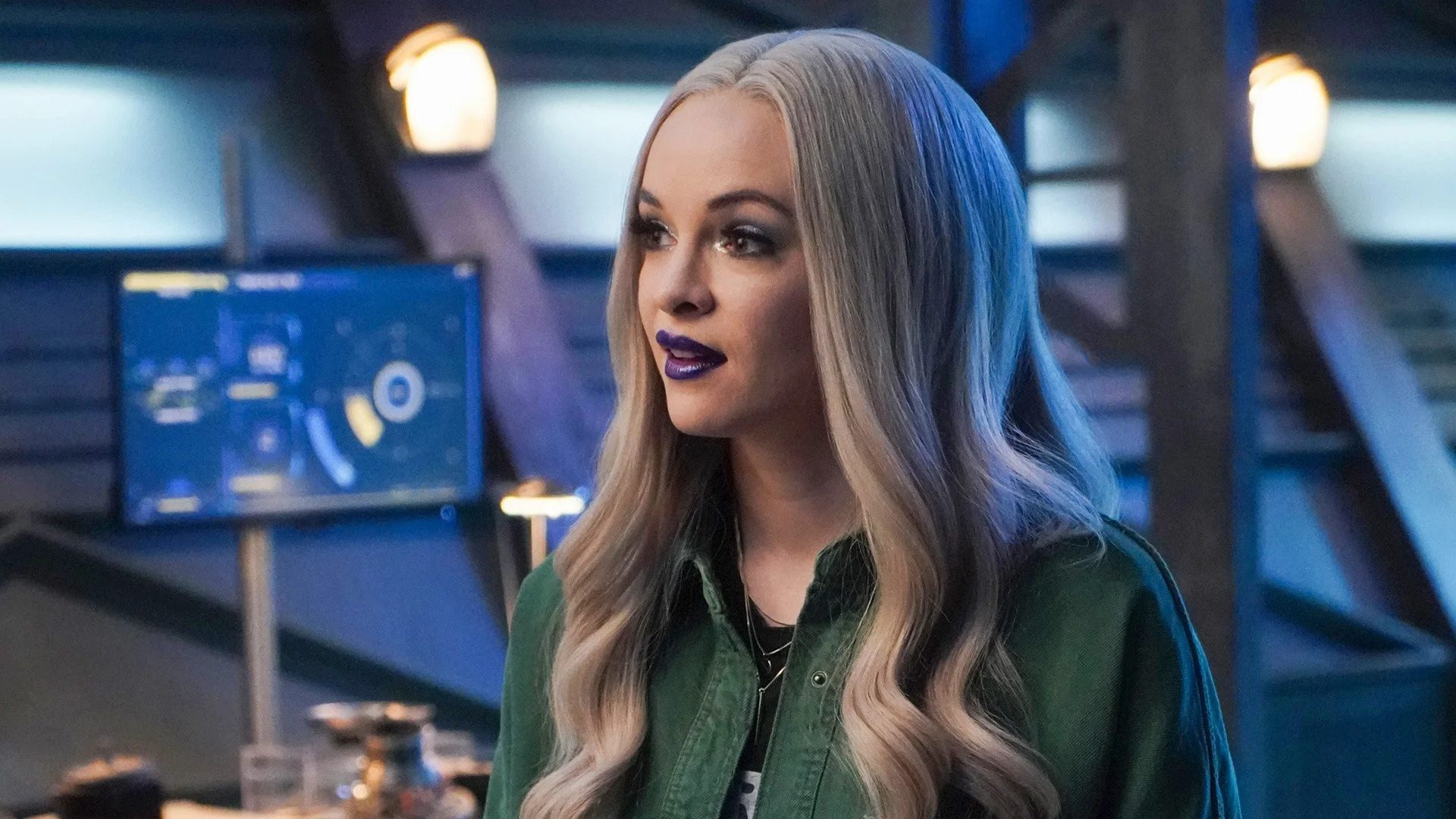 I’m probably starting to sound repetitive, but The Flash is still good, and I’m happy. “Reckless” is another strong episode, returning to perhaps the show’s most important theme and finding yet another way to explore it. It suffers only from an overly convenient plot point and more (though not as much as last week, thankfully) Sue Dearbon.

Frost comes up with a plan to stop Black Flame, but Barry isn’t comfortable with the risk it poses to her. Iris and Sue help Tinya find her mother.

And that’s it! Once more, The Flash has a very streamlined plot and subplot, and it continues to be a wise decision to write the episodes this way. What’s more, the B plot of “Reckless” informs the A plot in a surprising way, one that is set up in the opening scene without becoming clear till later. Picking up with last week’s cliffhanger (if you can call a conversation a cliffhanger), Deon tells Iris what he knows about her affliction, and it isn’t good. As he puts it, something in Iris is “causing time to fracture,” and it’s not something from outside; Iris is the source of whatever is happening around her. It started when Deon helped Iris prove that Joe’s death was a time alteration, specifically when he undid the treatments that were stabilizing her from moving through dimensions. In fact, this is just what Deon warned would happen if he didn’t treat her: time would fracture. Now, Deon’s got to come up with some other way to fix her, but in the meantime, Iris has to stay in Coast City, as movement will make the time jumps happen more often.

But that’s not the important part. When Deon tells her how bad her condition is, Iris immediately calls Barry, who shows up in about a second. (This is another instance of them acting not only like rational human beings but a couple in a healthy marriage.) Barry listens to Deon’s explanation and accepts the wisdom in Iris staying put, but he’s ready to set up camp in Coast City with Iris till she’s out of danger. In as kind a way as possible, Iris explains that this is crazy, that Central City needs the Flash, especially with a fire monster immolating people left and right. Reluctantly, Barry accepts that, and he returns to face the supervillain while Iris helps Tinya find her birth mother. All of this makes sense because of course Barry would want to stay with Iris and have to be convinced that he’s needed elsewhere. Not only does he love his wife, but he believes in the immediate good above the greater good, and Iris needs help now. Iris has to make him understand – fogged by love though his mind is – that he’s not doing any immediate good by staying with her, but he can do some in Central City. That isn’t completely evident at first, but it becomes so because this leads to the dilemma at the heart of “Reckless.” 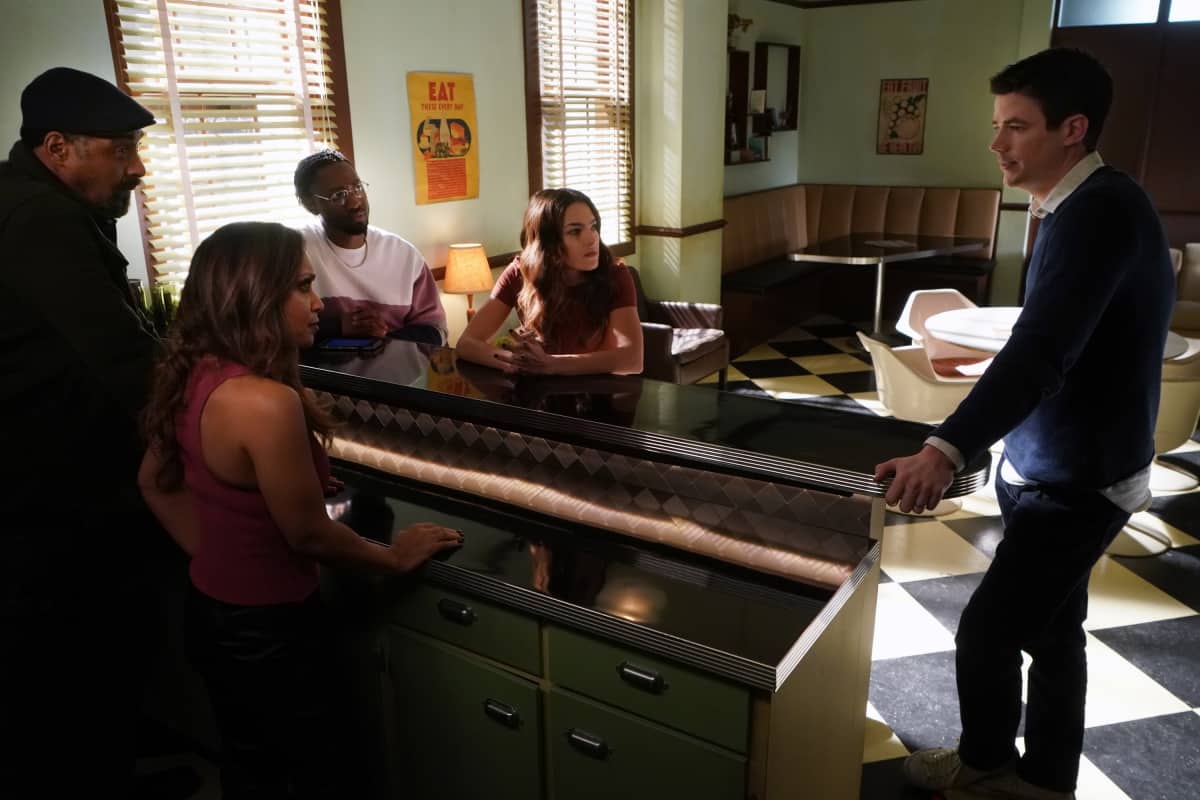 Black Flame finds its next victim, and it’s Frost (who has just finished putting together a horrendous piece of modern art that is, sadly, far from the worst one I’ve ever seen). It even manages to leave a lasting burn on Frost’s arm, which shouldn’t be possible for someone with ice powers. A trip to Dr. Carla Tannhauser – Caitlin’s and Frost’s mother – produces an explanation and a possible solution to their fire problems. Black Flame runs on cold fusion, and it attacked Frost in hopes of recharging itself. So Frost wants to use herself as bait so they can trap Black Flame in a cold fusion containment something-or-other-looks-like-a-bowl-from-an-old-school-humidifier. And this is where Barry’s frustrations with Iris come in; he doesn’t like the idea of putting one of his friends in danger, even if the potential reward is great. The drawback of losing a life will always weigh greater for Barry, and this is amplified by his inability to help Iris. He’s going to keep someone safe, dammit, and if it’s Frost, so be it.

That both of these motivations are true is indicative of the complexity with which “Reckless” explores its theme. Barry is being influenced by his inability to help Iris, and Joe helps him realize this in a great scene where the two are talking dad-to-dad, in a way. (Joe uses the word “leader,” but it’s pretty clear he’s thinking of Barry, Iris, and Wally when he explains how difficult it is to let your team make their own decisions.) And he is partly right; Barry does need to understand that Frost is capable of making this decision on her own, like an all-growed-up lady. But Barry’s stance is also perfectly in keeping with what his values have been from the very beginning, the values Joe helped instill in him: every life is precious, and the greater good is not an excuse to sacrifice someone. The only person Barry has ever been willing to sacrifice is himself, and again, this complicates things; Barry won’t risk Frost’s life, but doesn’t that mean Frost should be able to choose to risk herself, as Barry would? 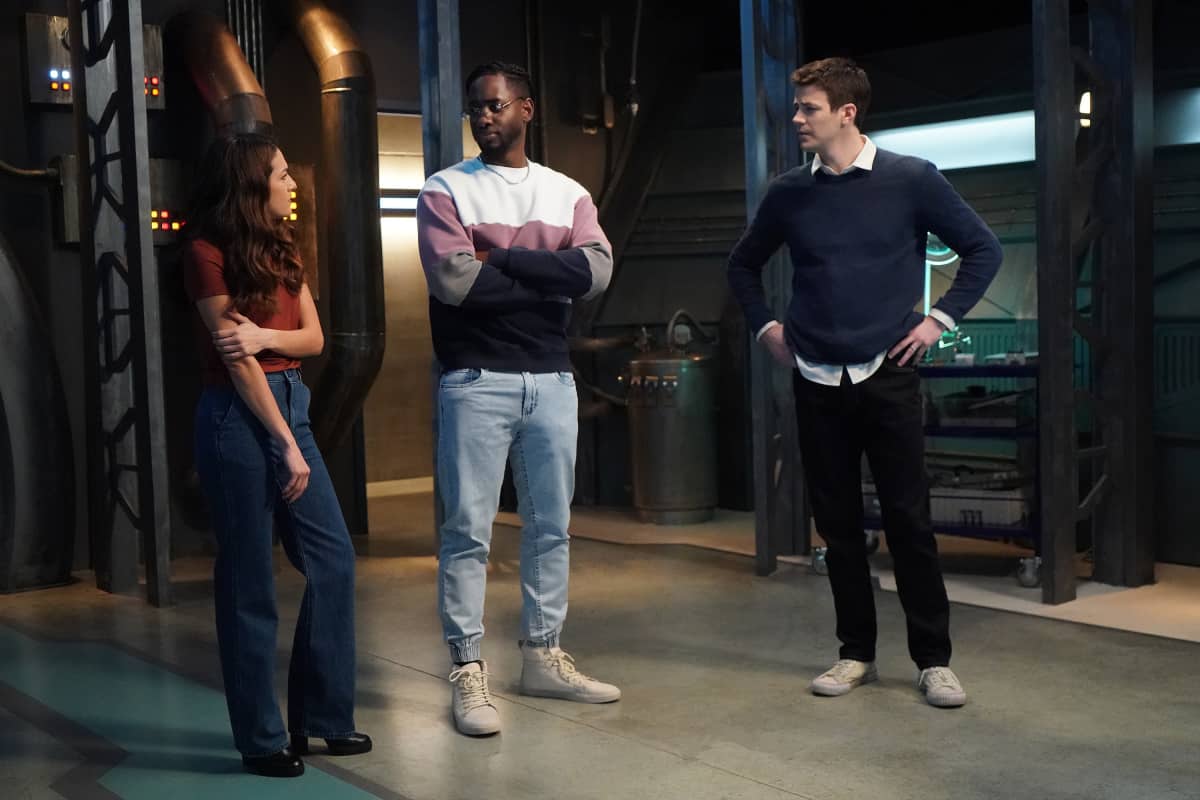 Then, Caitlin stomps back onto the show (like a boss; God, I love Caitlin Snow) and puts things in yet another perspective. She argues that Frost is being entirely too cavalier with her life. This jibes with something Barry says earlier in “Reckless,” that putting someone in that kind of danger is a last resort. Sure, this is an opportunity to trap Black Flame, but they’ve hardly exhausted all their options. And to make matters worse, they try it once, and not only doesn’t it work, but Black Flame almost kills Frost. Even after that, Frost wants to try again. So, even if you believe that the choice should be Frost’s, is someone this – yeah, I’m gonna say it – reckless capable of making that decision? Or should Barry and the others go along with it? And what about Carla Tannhauser, who styles herself Frost’s mother? Caitlin reads her the riot act but good, and she’s right; how could someone put their child at risk like that after she almost dies?

But, just as everything with this plot is going so well, “Reckless” gets lazy. It turns out that Carla has had ice powers similar to Frost’s all along, and she didn’t choose to mention it till now. You see, Caitlin examined her for any meta genes, and she tested negative, but soon after, Carla decided to test herself again because I guess it was a slow weekend, and she discovered she had the deus ex machina gene that gave her the exact superpower needed for an episode that wrote itself into a corner! It’s not that Carla having powers is a bad thing; I can actually see Barry holding metahuman training classes with her, Kramer, and maybe Tinya when that whole thing resolves itself. But how they’re revealed is a problem since it comes out of nowhere to service a story that clearly used it as a crutch. If Carla discovered that she had them through the plot – maybe they manifest while she’s trying to help Frost escape Black Flame or something – that would have been better. But if she had them all along, it feels tacked-on and silly. Also, if she always had them, why didn’t she put herself at risk instead of letting Frost do it? Caitlin was right to yell at her. 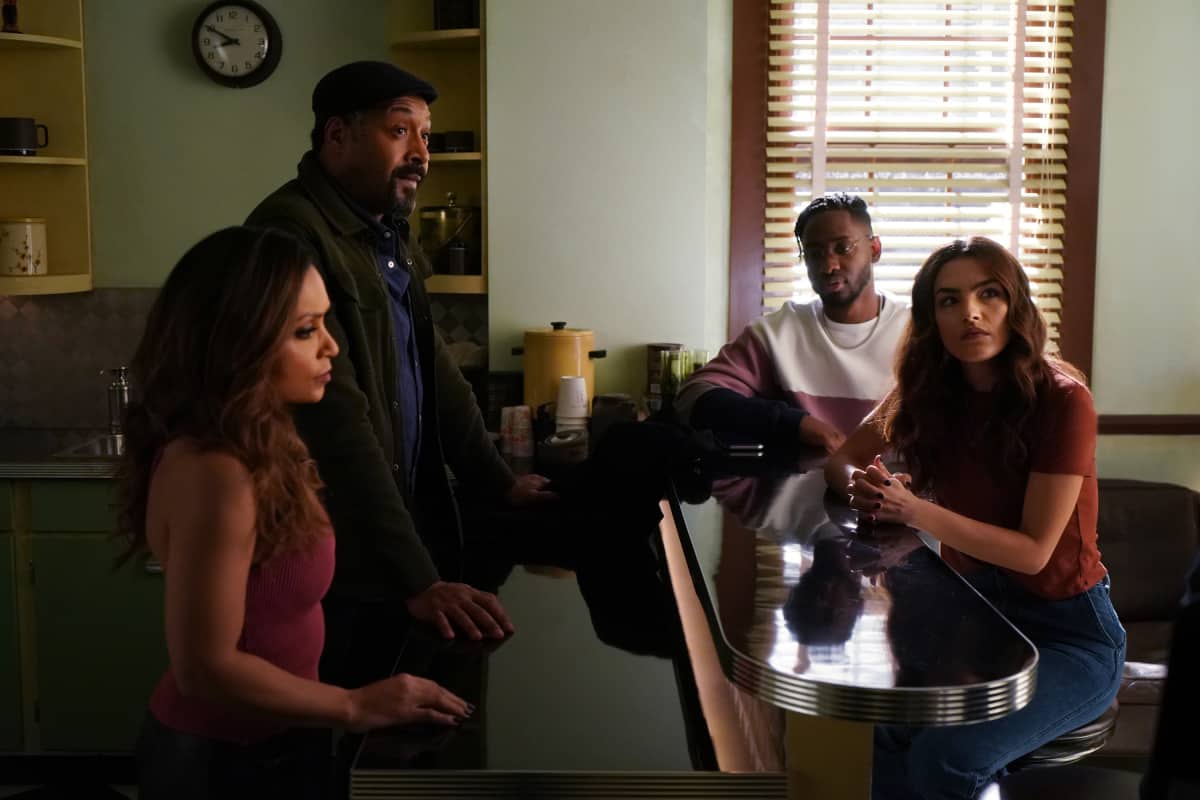 But, all’s well that ends well… except it doesn’t, completely. Even with Carla lending a hand, Black Flame is too powerful to trap. Still, they now have a lead on Black Flame’s weakness, and if they can build a better mousetrap, maybe they can stop it for good. The great thing about the resolution is that everyone is right; Frost should be allowed to decide to put herself in danger, but she’s also entirely too willing to do it when they may have other options. Barry needs to let go of things he can’t control, but his instincts in protecting his friends are right on the money. Caitlin needs to let Frost be her own person, but she’s also justified in her drive to watch out for her imprudent sister. And Frost is right to want to protect others, even to the point of self-sacrifice, but she also needs to remember that it’s a last resort and her own life is important too. I was expecting them to suggest that her willingness to risk her life is tied in with Frost’s desire for penance, but in a plot this stuffed, it might have been too much.

The Iris storyline is less interesting, mostly because it’s just A-to-B stuff. They find the adoption agency that handled Tinya’s placement, but the receptionist says she can’t divulge a client’s identity. So Sue calls her uncle, who, conveniently, is the head of the adoption board, and has him break laws and confidentiality agreements to make her happy. Are any of these people considering the consequences of what they’re doing? I understand Tinya; she’s a kid who’s in pain. And Sue is kind of careless and self-involved in general. But surely Iris understands that this is the kind of thing that makes people not want to choose adoption. Anyway, they find Tinya’s mother, they have a heartfelt reunion, and it’s more or less what you’d expect. The cool stuff here is how Iris’ time condition manifests in newer, scarier ways. When they leave the adoption agency, the receptionist goes to get coffee, then comes back and finds the entire waiting room empty. (Sidebar: is this really what an adoption agency looks like? It’s just a waiting room and a lady at a desk?) Then, when Tinya’s mother shakes her hand, Iris accidentally zaps her out of existence! What’s going on? We don’t know, but between this and Black Flame’s sudden interest in Caitlin, things are getting good.

“Reckless” is another good episode of The Flash, with a great and complex moral dilemma driving its simple plot. A deus ex machina hampers the momentum, but the character work is top-notch.