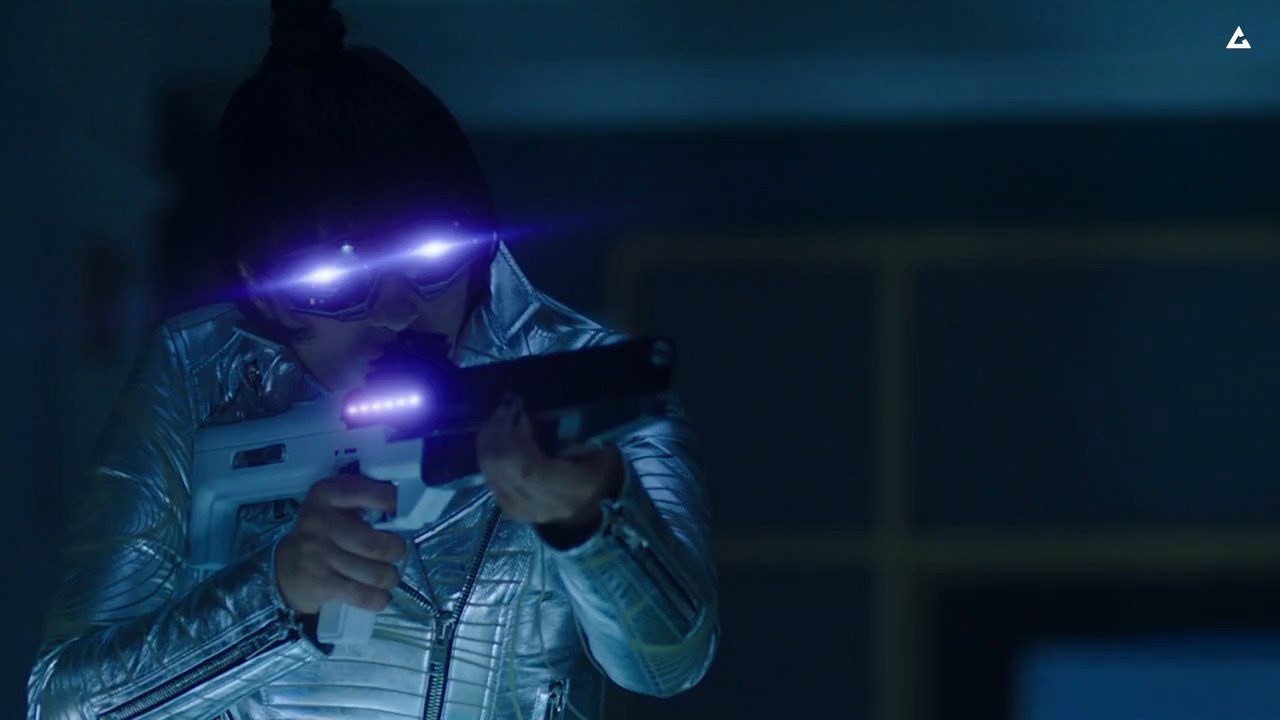 “Keep it Dark” is another stand-aloneish episode, where it’s mostly a self-contained story, but some of the plot points will likely return in the near future. (We’ll call that the Buffy Special.) Barry’s storyline is the subplot, while the main action focuses on Allegra and Chester. It isn’t bad and has a few nice moments, but it’s not great either, and some big logic gaps weigh it down. It’s not the worst episode this season, though; not by a long shot.

While trying to keep The Central City Citizen running during Iris’ absence, Allegra meets with an old acquaintance and decides to help her expose an increasingly violent gang. But she inadvertently puts her staff in danger when the gang finds out what they’re doing. Barry responds to a laboratory fire and discovers another speedster is running around Central City.

“Keep it Dark” may have the shortest opening scene in the show’s history. The Flash shows up at a lab that’s supposed to be on fire but finds the danger over and the scientists safe. When the lab guys thank him for saving them, though, Barry knows something strange is going on. And that’s it. I like this because it fits the structure of season 8, which is tight, straightforward stories divorced from clutter. Some episodes haven’t even had a subplot, which is refreshing after a few years of sending every supporting character on useless busywork that compels you to check the progress bar on the video. This week, The Flash efficiently begins the story, barring a funny exchange between Barry and Chester. (And it’s legitimately funny because I think they’ve finally found Chester’s voice; the mechanics of microwaving chicken tenders is a real thing, by the way.) This leads to Barry and Chester deducing that another speedster has arrived.

But that, surprisingly, is the B-plot. “Keep it Dark” is more focused on Allegra. She begins the episode running The Citizen while Iris is trapped in time limbo, and she’s doing pretty well. She seems on top of things, supporting her staff while doling out assignments, and keeping her sanity while performing a fast-paced job she didn’t think she could handle not long ago. Then, Taylor shows up, and all semblance of professionalism gets chucked out the window. Allegra and Taylor are still at odds after jockeying for Iris’ favor, and it’s still manifesting in ways that will hurt the paper. Allegra shoots down Taylor’s suggestion for a story regarding a witness to a crime scene, possibly even one of the Flash’s sidekicks. But the person in the photo is Allegra herself, and she doesn’t want to be exposed, so she kills the story. Taylor takes it personally – though just with an eye roll at this point because she expects no better from Allegra – and it’s hard to blame her. Her idea is perfectly valid, and hers is the only one Allegra shoots down. It’s also morally murky from Allegra’s point of view; she’s got a right to anonymity, but she’s doing so to the detriment of the paper, and she’s not giving her staff a reason why. Thankfully, this will be important later.

The meat of Allegra’s story comes when Lydia Sanchez, the woman she interviewed about leaving her criminal life behind, calls her and asks her to help expose their shared former gang, the Arañas. As Lydia tells it, they’ve stepped up their game since Allegra’s been gone, graduating from car theft and boosting swag from big rigs to wanton murder. Allegra decides to have Lydia expose the Arañas and their leaders – Sunshine and Dr. Light, two of Black Hole’s assassins who are now self-employed. (Remember Black Hole, the villains behind that potentially cool and unique storyline that was dropped like a stone in favor of Mirror Master 2: Mirror Mistress?) But all that time with the Flash hasn’t improved Allegra’s detective skills because one of the Arañas has followed Lydia and quickly tells her bosses all about their plan. Just as the interview is about to start, Dr. Light starts sniping with a cool sci-fi rifle that leaves impact wounds that look like when the T-1000 gets shot. Chester – who is also here because of tech reasons and also because he and Allegra are still overgrown children who won’t admit they’re in like with each other – concocts a force field to keep their would-be killers at bay, but the bad guys disable communications, meaning they can’t call for help. The rest of the episode becomes a waiting game, with Sunshine and Dr. Light ready to kill everyone to get to Lydia. 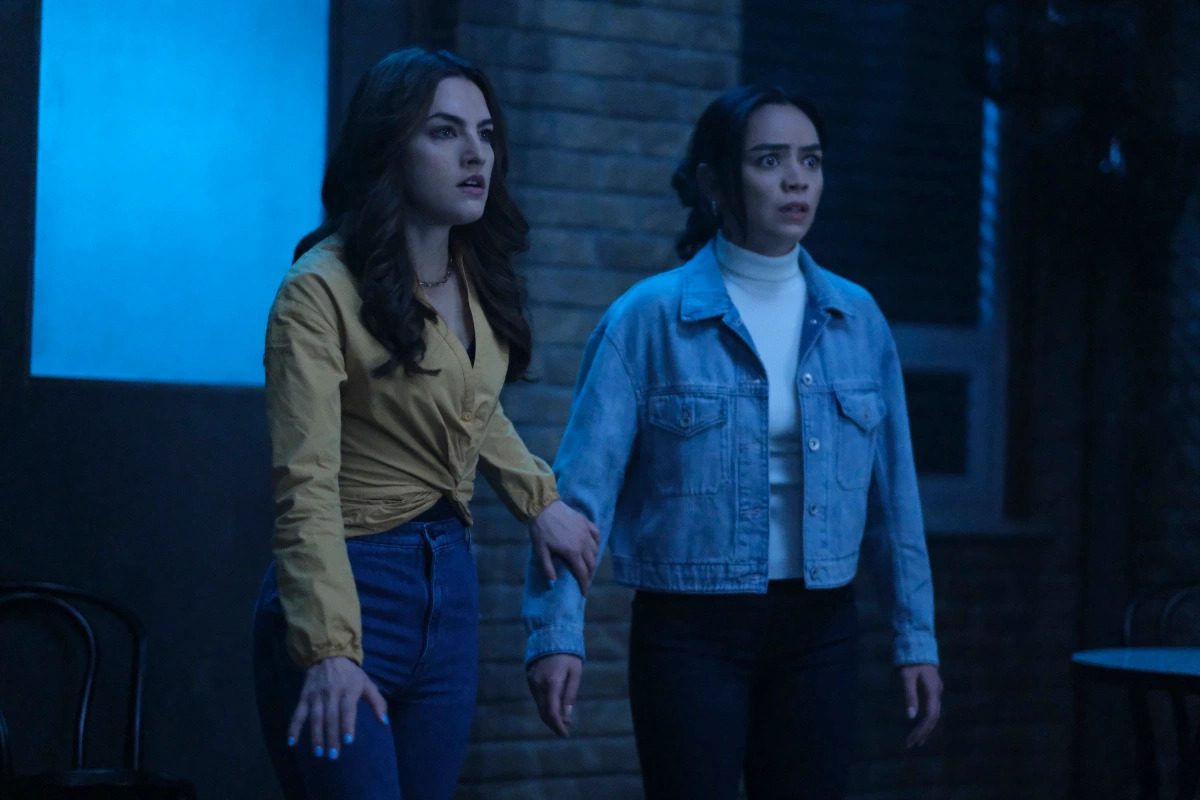 “Keep it Dark” is about the necessity of doing the opposite. Allegra understands this initially, convincing Lydia to expose the Arañas instead of running from them. But she’s keeping things in the dark, too, namely her past and her powers. Killing that story of Taylor’s is selfish, and not just because it could sell newspapers; she’s lying to her employees without giving them a reason, distrusting their loyalty and their integrity as journalists. So, when Taylor finds out about Allegra’s criminal history on her own and exposes her, the reporters distrust her right back. Instead of being a united front trying to keep each other alive, the Citizen hostages (which is effectively what they are) devolve into an every-man-for-himself attitude, especially Taylor, who’s all too ready to throw Lydia to the wolves to save herself. Part of being a leader and a hero is putting yourself on the line, not just encouraging others to do it, and Allegra learns that as she watches her staff mutiny. So she decides to be as brave as Lydia and tell the whole truth, and this is what gets everyone to back her. Once Allegra chooses to trust them, they trust her too, and it’s their teamwork that foils the assassination attempt and saves their lives. Taylor even seems to have gotten past her animosity towards Allegra by the end.

It’s not a bad story, but some things are hard to swallow. Dr. Light and Sunshine are so desperate to stop Lydia from exposing them that they’re willing to kill everyone in the building and wait outside all night. But when the force field goes down, and Allegra lets them in, they waste time fighting her instead of going straight for Lydia. They don’t even split up so they can multitask. Then, Lydia’s interview begins, and they see it on the televisionsas it’s broadcasting across the city. Their response is to stop in their tracks and watch. Again, why wouldn’t they do everything they could to stop the interview before they’re named? I thought Sunshine could essentially teleport through sources of light; can’t she beam into the room through the light from the cameras? It would’ve been great if she did, but before she could kill Lydia, Taylor knocked her out; it would signify Taylor growing from Allegra’s reveal, saving the woman she was ready to sacrifice and facing the killers of whom she was terrified. 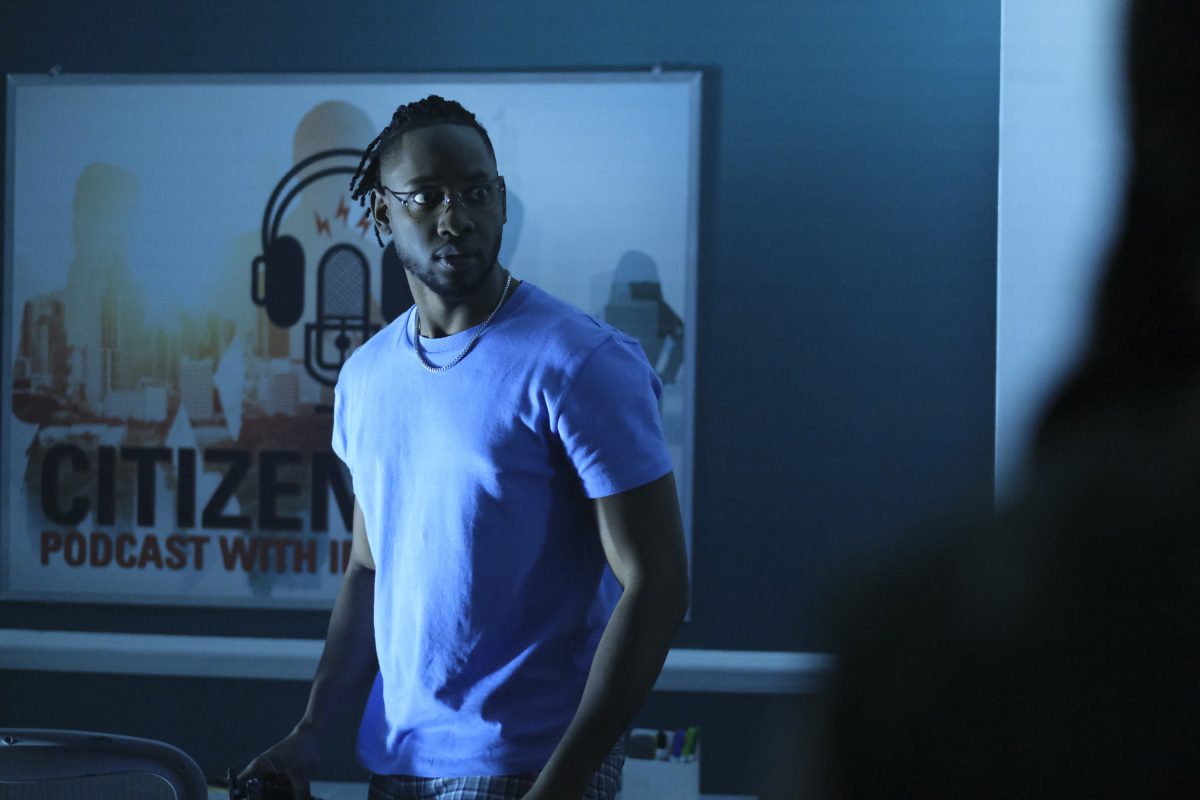 Moreover, once communications are back up, wouldn’t it make sense to at least try to call the Flash? Allegra isn’t a slouch or anything, but she’s at a severe disadvantage against these two; Barry, on the other hand, could have taken down Dr. Light in nanoseconds so they could deal with Sunshine. These may sound a little nitpicky, but in a plot that’s supposed to sell a desperate, hopeless situation – on both sides – everyone needs to act like it. Plus, this season has been really smart about details like that up to this point, so it sticks out when dumb things happen because the plot needs them to happen. Also, I hate to say it, but Kayla Compton isn’t a strong enough actress to carry a whole episode on her own. She’s fine when she’s in a supporting role, but after a while, you wish the Flash would show up. Caitlin or Cisco could pull this off, and even Chester managed to shine in the episodes about him, but Compton isn’t in that league.

The highlight of “Keep it Dark” is the subplot. Unlike Allegra and Chester, Barry does the most logical thing upon discovering there’s another speedster in town: he goes to visit Eobard Thawne. Thawne is rotting away – literally – in an ARGUS prison on Lian Yiu, which is a nice callback to Arrow. Thawne no longer has his speed, and it’s taking a physical and mental toll on him. He’s gaunt, looking like he’s barely eating, and he’s desperate for knowledge of the outside world, wanting a connection to almost anything since he has none with the Negative Speed Force. Barry is ready to leave his pathetic archenemy to his growing madness, but Thawne entices him to stay, offering an exploration of his misery while advising Barry about the new speedster. Tom Cavanagh is perfect, as usual, and every time he shows up, he reminds you of how much he brought to The Flash. He’s utterly convincing as a thoroughly defeated Thawne, walking around on wobbly legs, eager to talk to the man he hates most just to talk to anyone, perhaps even to be around a fellow speedster so he can get the slightest taste of all he’s lost. And that grin when Barry leaves… was this all a put-on? Has Eobard Thawne got something sinister up his sleeve? I think it’s safe to bet that he does, and I can’t wait to see it. 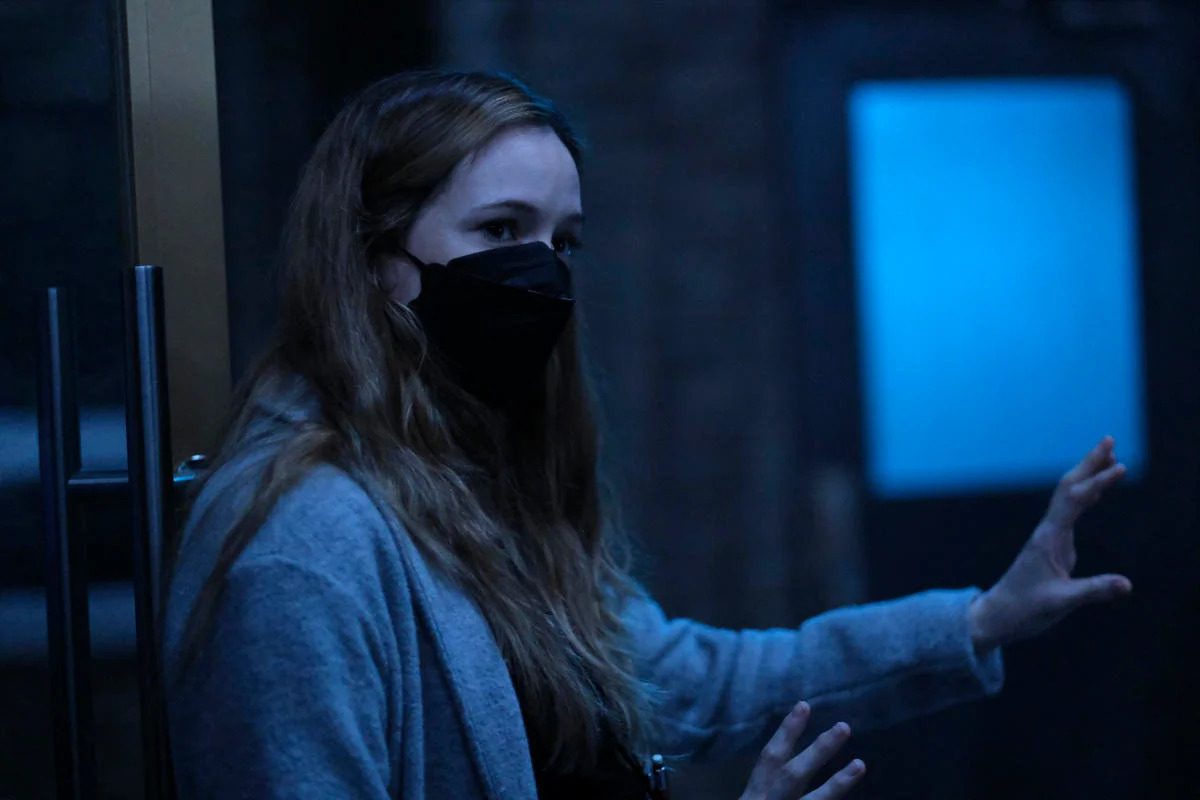 Thematically, while far from the strongest episode, “Keep it Dark” fits with the rest of the season. Allegra is learning leadership in the same way Barry has been, if not as interestingly. Her willingness to trust the other reporters with her secret mirrors Barry doing the same with Kramer (in an episode with a very similar plot to this one, although it was better). And Barry choosing to help Dr. Meena Dhawan, the new speedster, learn to control her powers furthers his role as a mentor to budding superheroes. (Their handshake is another reference to his team-up with Kramer.) I wonder if season 9 will explore this further, with Barry forming a superteam he’s guiding through their training. Caitlin also makes an appearance at the end, taking a leave of absence from STAR Labs. This not only freed up Danielle Panabaker to direct the episode (and she was good; I liked the way the fight with Dr. Light and Sunshine was filmed), but it sets up something dark for her. I don’t think Caitlin has abandoned her plans to resurrect Frost, and her understanding of Barry is likely a put-on similar to Thawne’s feigned weakness and delirium. Dark days are coming, and I’m here for them. But as for “Keep it Dark,” it’s just okay.

“Keep it Dark” is a mediocre stand-alone episode – albeit with some plot points that will likely return – that grows Allegra’s character and introduces Barry to another potential metahuman pupil, but some logic holes and a lacking lead performance in the A-plot keep it from completely hitting the mark.