REVIEW: The Flash – Season 8, Episode 8 “The Fire Next Time” 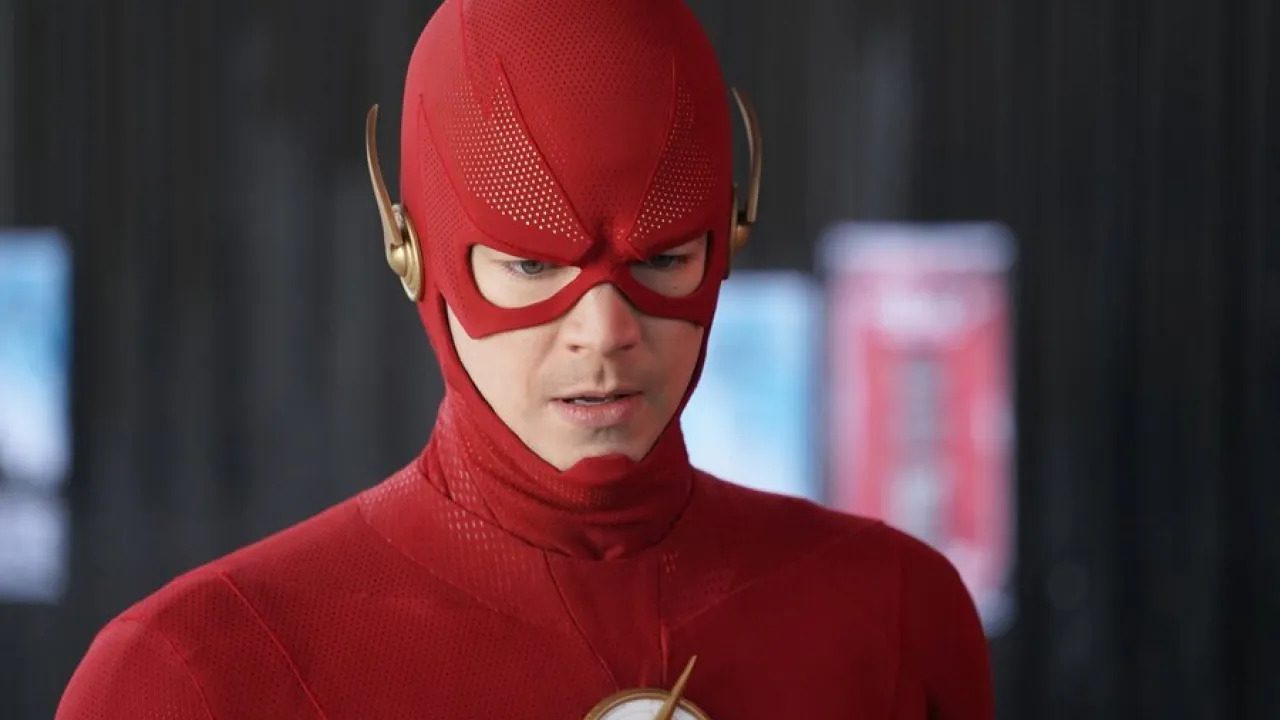 The Flash has been (mostly) on a hot streak this season, and “The Fire Next Time” keeps the heat burning. While not a spectacular episode on its face – and marred by a muddled subplot – it’s a great examination of one of the often-overlooked factors that turned Barry into a hero. It’s also got something we haven’t seen on The Flash in what feels like a long time.

Barry investigates a meta murder, but while the evidence points conclusively to one man, Barry doubts his guilt. Iris and Allegra butt heads over a person-of-the-week article for The Citizen.

The first scene of “The Fire Next Time” clues us in that something is going on with Barry. He’s clearly sad, and when Iris suggests dinner out, he begrudgingly agrees; even when she thinks better of it and decides they should stay home instead, he’s grateful but still not entirely relieved. The calendar, focused on by the camera a couple of times, shows mundane events like a dentist appointment and a “date night,” but nothing that would indicate what has Barry so down. Obviously, this is setting up the rest of the episode, but it’s also a good reminder of how strong Barry and Iris are as a couple. She knows something is wrong and does what she can to help, and his thank-you is sincere, even if he’s still depressed. Nobody gets mad, and nobody starts a selfish argument; they act like a pair of adults who understand each other. Barry and Iris will be separated for most of the hour, but these two minutes go a long way in making them continue to feel connected.

Like last week’s “Lockdown,” “The Fire Next Time” is a streamlined episode, with a main plot and a single subplot whose themes complement each other, and it’s stronger for it. While examining a crime scene involving a dead body that’s been burned to a crisp, Barry quickly identifies the likely suspect as Jaco Birch, a metahuman with the ability to control fire. (IMDb says we’ve seen this character before, but for the life of me, I can’t remember him.) The police quickly round up Birch, but as he’s being led away in handcuffs, he insists he’s innocent, pleading with his on-looking son to believe him. It seems clear his seemingly perpetually disappointed son doesn’t, nor do the police or anyone who looks into the case – but Barry does.

The reason for Barry’s melancholia is that this is the anniversary of his father’s death. When he reflects on Henry Allen’s life, he’s reminded that so much of it was taken away from him – and from Barry – when Henry was convicted of a murder he didn’t commit. When he looks into Birch’s eyes, Barry sees the same look of terror, frustration, and desperation to be believed that he saw in his dad on the night he was arrested. The evidence lays the crime at Birch’s feet, and one by one, Barry’s friends (except Caitlin, because I guess one episode was enough for a while) conclude that Birch is guilty. But Barry can’t shake his belief that they’ve got the wrong man, and he’s determined to save Birch as he couldn’t save his father. But is Barry right, or is his mind clouded by his sorrow for Henry’s ordeal? 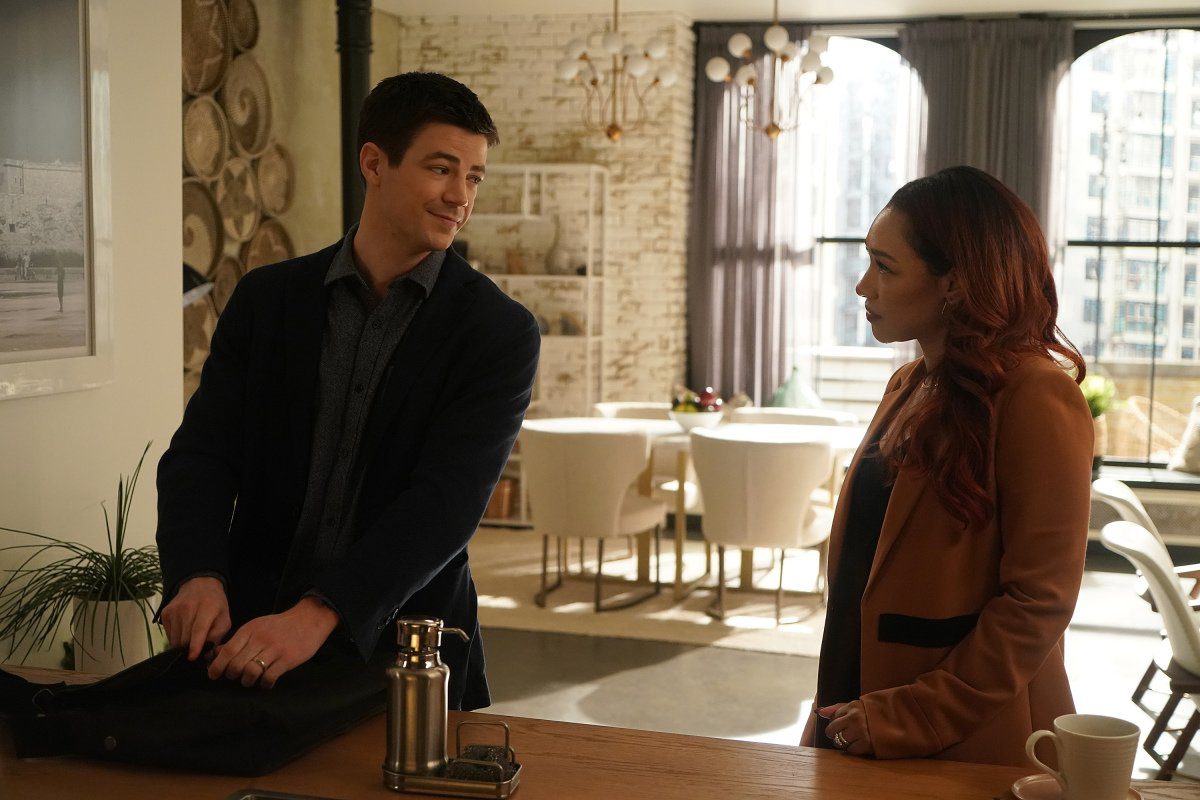 In a situation like this, only a dad can help, and Joe shows up for one of those Joe/Barry talks that seem to have tapered off as The Flash has gone on. It’s a wonderful scene, as these always are. Joe makes Barry see through his mounting doubt and realize that his father’s arrest made him more empathetic to the innocent, more determined to make sure that kind of injustice never happens again. While many would have grown angry and resentful, perhaps even used their eventual super-speed to strike back at the broken system that destroyed their family, Barry used it to fuel the good man he would become, and the hero he is now. And this bears out in “The Fire Next Time,” as they quickly discover that Birch was not the killer, and he needs Barry to make sure he doesn’t slip over to the other side of the line Barry treads every day. This scene works so well not just because it reminds us of how much Joe loves Barry, but because while it focuses on Henry’s influence on Barry, it also demonstrates how Joe molded him just as much. I get the impression Grant Gustin and Jesse L. Martin can perform these scenes in their sleep at this point, but I still never get tired of seeing them do it.

Like Barry, Allegra also finds herself in a position where she sees something no one else does. In her case, it’s a story on a person of the week for The Citizen; she narrows down the list of possible subjects her team has compiled, but Iris decides to go with one of the choices she weeded out: an influential podcaster who would bring a lot of attention to the paper. Allegra correctly points out that it’s hard to be in a position of authority if a higher-up is going to undermine you in front of your team; Iris responds childishly by throwing her weight around as Allegra’s boss. Then, as if Iris overruling her isn’t bad enough, Allegra now has to go with Taylor, the reporter who suggested the podcaster, to interview the subject and write the article. Predictably, Allegra isn’t thrilled with this and ends up writing a different article, this one about an old acquaintance of hers who’s struggling after being released from prison. Just as predictably, Iris is mad that Allegra wrote something else, and Taylor’s article is subpar because of it. 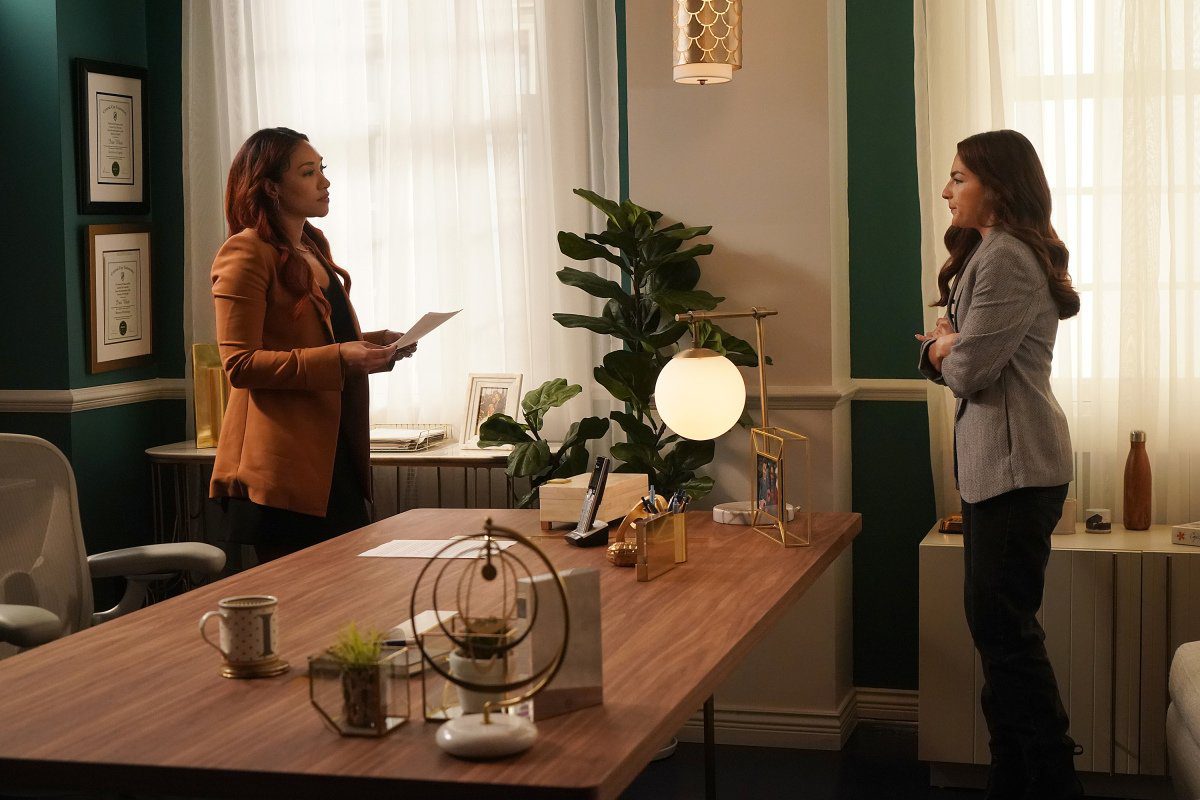 This plotline doesn’t work as well as Barry’s because everyone is screwing up, and no one is taking any responsibility. If Iris is going to undermine Allegra like that, she shouldn’t have her in a position of authority. Allegra also can’t simply do another story when Iris assigned her the podcaster one. And now, thanks to both of them acting unprofessionally, Taylor feels like she’s being sabotaged by someone who doesn’t like her and is planning to ruin Allegra’s career. This is a fiasco of Iris and Allegra’s making, and Taylor will end up being the one to pay. But will either of them acknowledge this? My guess is they won’t, especially Iris, who seems completely uninterested in her part in this. But I guess we’ve got the villain for whatever Citizen storylines show up in the rest of the season.

We’ve also got a central villain, it seems. By the end of “The Fire Next Time,” Birch is in the clear, but the killer remains at large. What’s more, Barry suspects they may be dealing with a metahuman serial killer. (At first, Chester’s mentioning of the two victims not being connected by race or gender annoyed me, but once Barry says they’re looking for a serial killer, it fits with creating a victim profile.) I like this idea; it’s something different from what we’ve seen so far, and Barry will have to investigate the murders using new methods. I also like that as Barry’s powers intensify, so do those of his enemies. I had to laugh, however, when Cecile says she can’t use her powers on Birch because it would be a violation of his rights. On the one hand, I’ve been wanting them to acknowledge the invasion of privacy having telepathic powers creates, but at the same time… COME ON! Cecile has been doing this to absolutely everyone she’s come across since she developed these powers, often with far less noble aims than clearing an innocent man. Where did this line in the sand come from all of a sudden? “The Fire Next Time” stumbles here and there, but when it’s good, it’s great – just like The Flash.

The Flash – "The Fire Next Time"

While not a spectacular episode on its face – and marred by a muddled subplot – “The Fire Next Time” a great examination of one of the often-overlooked factors that turned Barry into a hero.

Just want to say you’re my newest favorite tv blogger, having been following all of this season’s reviews of yours. Exactly what I need to read to remind me of the reasons I continue to hate-watch this show lol To paraphrase your last line: The Flash stumbles, but when it’s good, it’s great. I mean, good gravy is it a struggle not to punch my computer screen at every line that comes out of “Chester P.’s” useless mouth, but then there’s scenes like the one in this one with Grant Gustin and Jesse L. Martin whose skills I will never tire of watching.
My only bone to pick with you in this episode is I actually found the reasoning of Iris to be legitimate throughout the episode until you mentioned your perspective. And your point about undermining Alegra with such dismissiveness is taken, even though, again, I also think she’s weighing both audience engagement concerns and mentoring a mentor pretty well.
Also, could not be crushing more on your use of the word melancholia.

Thank you very much! I appreciate that, and I’ll try not to rest on my laurels.

I think Iris’ feeling about the article was fair, but a better way to go about it would have been to have Taylor write a different article about the podcaster and keep Allegra’s decision about the person of the week. That way everyone saves face, Allegra isn’t undermined, and the paper gets the readers the podcaster would bring in.

Chester is awful. He’s like what someone who doesn’t really understand what made Cisco special would do to recreate Cisco. He speaks non-stop in pop culture references, but they aren’t clever or relevant to the situation, they’re just “Look at the thing I like!” Part of the reason these last couple of episodes have been is that he’s been minimally involved.

And absolutely, Joe and Barry can still warm my heart.