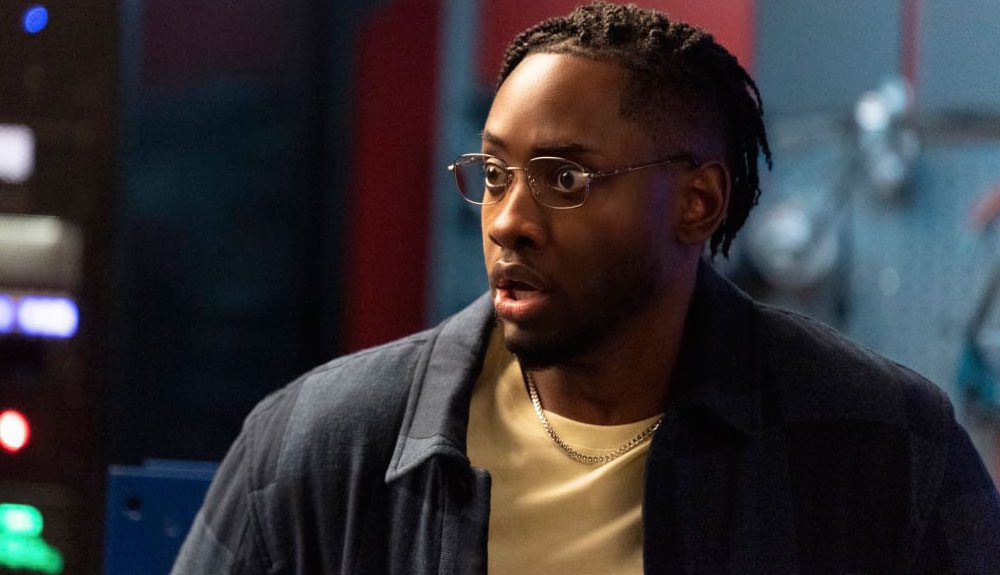 Not only does “Phantoms” continue a great run for The Flash, but like the show’s hero, it does the impossible: it made me like Chester. It couldn’t pull off the same feat with another obnoxious character who almost sinks her subplot, and there are some details revealed this week that don’t thrill me, but the main plot and character work keep the episode – and the season – afloat.

The seral-killing fire meta claims another victim, and the details of the case disturb Chester. Iris accompanies Sue Dearbon to Coast City to look for a new meta who can walk through walls.

“Phantoms” begins with Iris consulting Deon about her dreams or blackouts or whatever is going on with her. This is a good way to start the episode because it’s the most logical thing for her to do. She’s been training with Deon to control her force abilities (insert Rey joke here), so it would make sense that her problem is connected to that and that Deon would be best equipped to figure out what’s happening. Unfortunately, he’s stumped, but he sets off to investigate, effectively putting a pin in this subplot and having Iris be actively involved in it without actually doing anything so the episode can focus on other things. That’s smart, efficient writing, the kind The Flash is capable of at its best.

That doesn’t mean Iris has washed her hands of her problem for the duration of “Phantoms.” But instead of trapping her in the forceverseswirlything, she uses her time-lapse problem to fuel her as she joins Sue Dearbon to search for a new meta in Coast City. (The way she snatches the luxury trip from Allegra is hilarious; all it needed was a deflated Allegra muttering something like “It’s good to be the king” as a capper.) When Sue finally gets her to admit what’s wrong, Iris says that finding the meta – a teenage girl named Tinya who looks like an amalgam of every hippie Portland weirdo ever to hold a protest sign – Iris says she wants a distraction from what’s ailing her. Maybe that’s part of it, and I’m sure she also wants to help her like she helped Barry, but underneath that, I believe she’s helping Tinya in place of herself. Iris is powerless to fix her affliction or even find out what it is, but Tinya is a flesh-and-blood person for whom Iris can do something.

Not to go off on too much of a tangent, but Iris’ motivations in “Phantoms” got me thinking about relationships on this show. The reason for Caitlin’s absence – aside from keeping Danielle Panabaker around without spreading her too thin in an episode where she isn’t the focus – is that she’s diving into a romance with Marcus. Now, on paper, Caitlin and Marcus make sense; they’re both scientists who are – and I don’t mean this to sound derogatory because I love Caitlin – not exactly live wires, personality-wise. That makes their relationship boring. Then, look at Barry and Iris. They have very different personalities, so it’s fun to watch them bounce off each other, as opposites will. But Barry and Iris are bound by a similar worldview; they’re both good people who want to help others, as Iris demonstrates in “Phantoms.” That’s what connects them, and what contrasts them with the brief flirtation Barry had with Felicity Smoak way back when; they were similar in the same ways Caitlin and Marcus are, but they didn’t click because the chemistry of two different people challenging each other wasn’t there. (Felicity ended up clicking with Oliver Queen, who’s even more different from her than Barry is from Iris.) In other words, I don’t see the Marcus thing lasting unless it’s just going to be background noise to explain why Caitlin isn’t around, but Frost is.

So much for not going off on too much of a tangent. 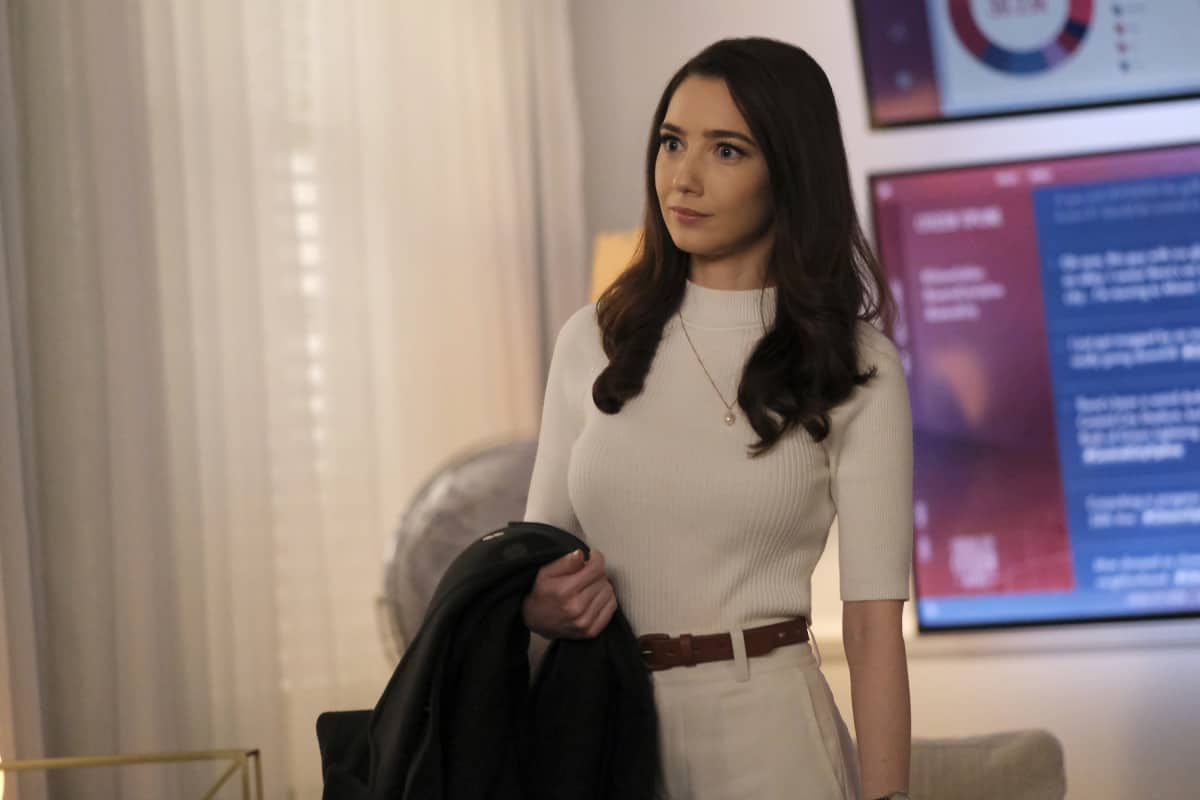 The Iris plot works, especially for her, but Sue Dearbon comes dangerously close to ruining it. I never liked this character; she’s smug and annoying, and Natalie Dreyfuss’ exaggerated facial expressions would make a mime blush. In “Phantoms,” she and Iris are looking for Tinya because they want to help her, meaning they have to get her to trust them. But Sue is so abrasive and condescending that Tinya understandably runs away – after destroying Iris’ meta-tracking phone. Even her final gambit with that phony power-nullifier makes me wonder how Tinya could ever trust them. I haven’t seen Natalie Dreyfuss in anything else, so I don’t know if this is her fault or a case of writers not knowing how to write a wacky friend. Whoever is at fault, Sue is sigh-inducing, and in retrospect, it’s probably for the best that Iris took the story from Allegra because someone still learning the ropes would have a hard time cleaning up the mess this dope makes.

On the other hand, “Phantoms” takes another character who’s typically like this and uses him to great effect. Chester has been a drag since he first showed up, a cheap Cisco knockoff that misses everything that made that character special. But this week, he’s so much more enjoyable and actually sympathetic. When he looks at some of the crime scene photos Barry shows the team as they investigate the fire meta – whom we’re now calling Black Flame – it’s clear Chester is particularly disturbed. Throughout “Phantoms,” he has strange dreams about Black Flame that seem real until somebody shakes him awake. Slowly, he begins to believe his father is Black Flame, that he somehow survived the car wreck that killed him and is now murdering innocent people, with his sights set on Chester. Like Iris, Chester is chasing a ghost, but this is one he knows – and one he can’t be sure is actually there. 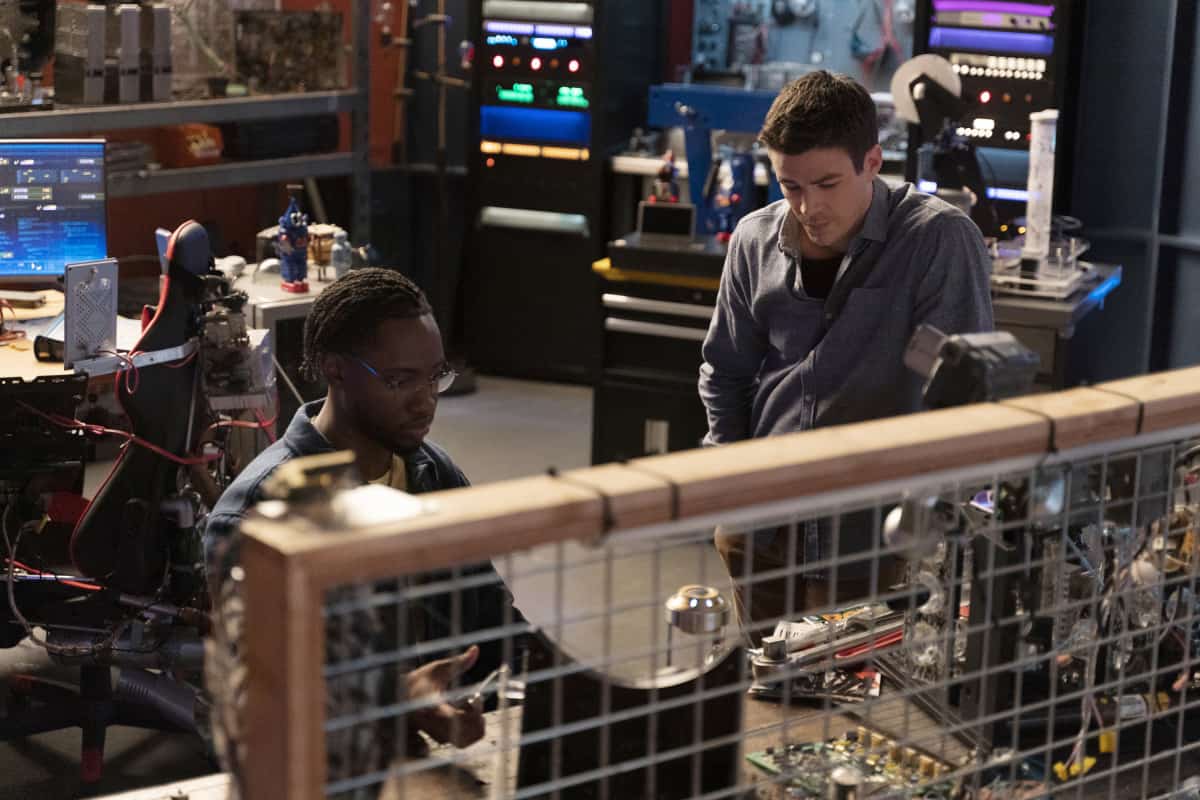 This is significant for Chester because he’s lived with confused feelings about his father for most of his life. He hated him for a long time, assuming his dad never cared about him and effectively abandoned him for his work. But a time-travel escapade allowed an adult Chester to meet his dad as a peer rather than a child, and he gained a better understanding of the man he never got to know, the guy who loved him and shared his scientific prowess and appreciation. Now, he’s faced with the possibility that his dad is an even bigger monster than he once thought, and it’s destroying him. Ultimately, it’s the family he chose that helps him come to terms with the one he lost, and with Allegra and Cecile’s help, he clings to the good man he discovered and vanquishes once and for all the cold man he feared. The key to making this work is that “Phantoms” finally takes Chester seriously. He doesn’t make a stupid joke or mug for the camera every five seconds; he acts like a person, and that’s what they need to learn to do with Sue.

As for the bits and pieces of “Phantoms,” some work, and some don’t. Chester and Allegra’s flirtation is still maddening. Twenty bucks worth of free writing advice: a will they/won’t they plot doesn’t work if the unrequited lovers are aware that they both like each other. I also got a kick out of how Cecile immediately dropped that whole “Don’t read people without their permission” principle from last week to scan the feelings of everyone around her. And I’m not crazy about Black Flame just being a sentient pillar of fire; there may be more to it, but I’d rather a character Barry can interact with than an element with a mind of its own. I do like the ending, though, with Barry and Iris having another mature conversation about the dangers each is facing. It’s refreshing to hear Barry tell Iris that he thinks she’ll be safer out of Central City and away from Black Flame, and Iris agreeing and being grateful she has a husband who cares about her. In too many shows or movies, she’d throw a fit and tell her superpowered husband she can take care of herself. I think she’ll be back home sooner than either of them thinks, though; her and Chester’s afflictions are too similar for them not to be connected, and the way The Flash has been streamlining its storytelling this year, it’s a safe bet the plots will converge. I also like seeing Barry use his powers for convenience, even if it’s technically for a case; I laughed when he zoomed away and returned with Chester’s containment tube. I’m a little dismayed he didn’t run to Coast City to take advantage of that swanky hotel suite with Iris, but I guess they can’t risk Tinya being a light sleeper.

“Phantoms” is yet another good episode in what’s shaping up to be a stellar season. Sue Dearbon is an annoying presence, and some of the smaller details don’t work, but Chester’s development and Iris’ subplot are good character-growing storylines.

You know what, I think our aversion for Chester P. (who refers to themselves like that??) is rather matched, and this episode indeed had several moments where Chuck (not actually a short form of Chester) was bearable, even sympathetic. The actor himself actually has some chops… when he’s not delivering stilted references like ‘oh my Fahrenheit 451’.

Unlike you, apparently, I liked the character of Sue when she was sparring with Ralph in battles of sass, but you’re right inasmuch I think the writers have no idea what to do with her character now. And she absolutely would have sabotaged the Phantom story if not for Iris coming along.

I’m not particularly thrilled about this sentient pillar of fire either. But I am very intrigued by Iris’s dilemma they keep dragging out. So if they do in fact collide, here’s hoping they stick the landing.

Yeah, I like Iris’ storyline a lot. It seems way too coincidental to me that she and Chester are having what looks like the same condition, and Chester’s was tied to the Black Flame.

As for Chester, if they can keep him more like this, maybe they can save him, and I can chalk up the last year (or however long he’s been on the show; it all kind of melds together) to them finding their footing with him. I actually felt that way about Ralph when he was around; I couldn’t stand him at first because they made him so goofy, but once they pulled back a little and let him be a human being, I ended up loving him.

I’m excited in general, though, because it’s been so good this season. I’m more than happy to give them time to make Black Flame cool.