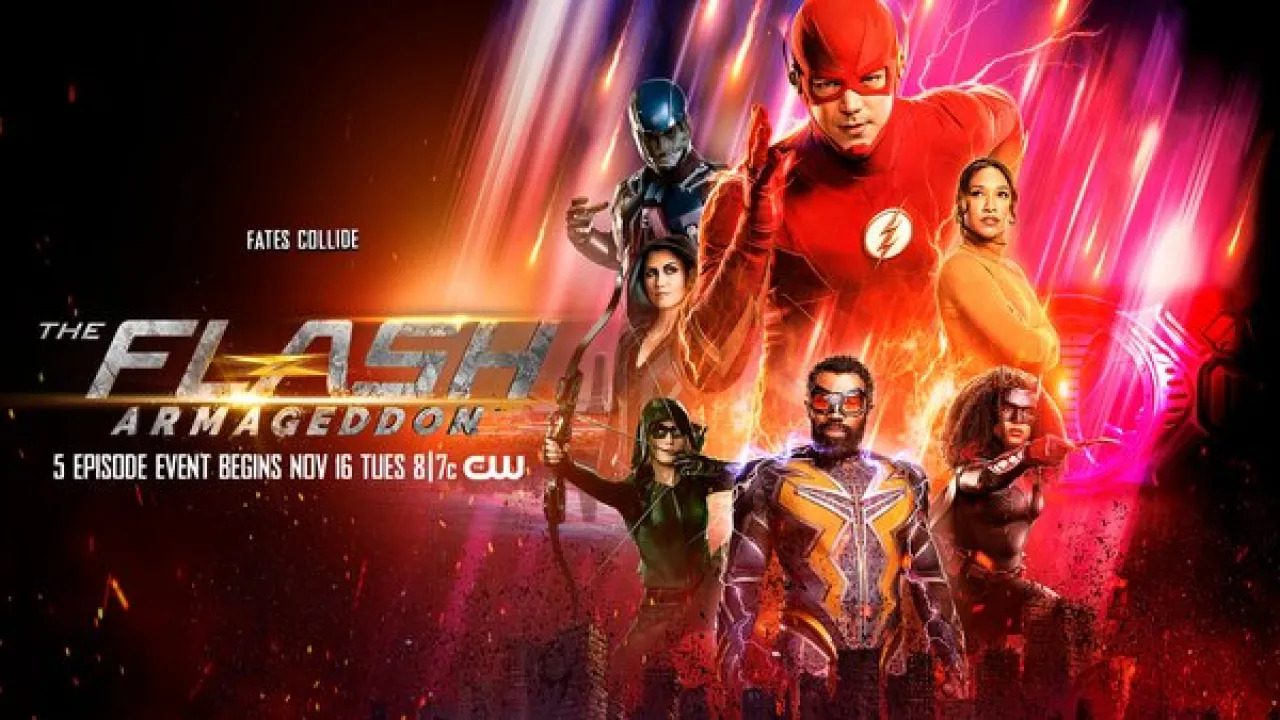 The leaves are falling, the temperature is chilling, and The Flash has returned for a new TV season. The past few have been lackluster, to say the least, but I keep hoping that this once-great show will find its groove again for more than a couple of episodes. Season 8 opens with “Armageddon,” a five-part event that, based on the poster-like ads, will eventually incorporate a bunch of other Arrowverse heroes. And it’s off to a pretty good start. While it has too many characters, occasionally grating humor, and some awful special effects, “Armageddon Part 1” functions as a typical Flash catch-up season premiere, and it introduces the mini-arc of the event series, as well as a cool new villain (thank God!).

Barry tangles with a crew of thieves called the Royal Flush Gang (this is where that grating humor comes into play). As The Central City Citizen expands, Iris promotes Allegra. Ray Palmer arrives to attend a technology convention, unsure of what he wants to do with his life now that he’s left the Legends. Chester acts as Ray’s guide and assistant. Caitlin has virtually nothing to do, and Joe is entirely absent, because this show now prioritizes boring new characters over the ones that made it a hit. And a mysterious visitor arrives from the future with lethal designs on the Flash.

The first half of “Armageddon Part 1” is a season premiere, through and through; it establishes where the main characters are and what’s changed since last season’s finale. Barry and Caitlin get some coffee, and she tells him she’s finally ready to date again after losing Ronny (and her flirtation with the Harry Potter kid, which I guess we’re just never going to acknowledge as having happened). She also explains Frost’s absence with a reason other than “this show is so over-stuffed with characters that we have to sideline half the cast.” The Flash rescues people from an impending trainwreck. Barry and Iris talk about having kids (and, mercifully, assure us that their obnoxious grown ones from the future are away). Ray Palmer is looking to retire and spend time with his wife. Chester is still annoying, though a little less so than usual. And Kristen Kramer is still around (yes!) and has disbanded the Metahuman Task Force. But best of all is Iris.

Iris’ newspaper, The Central City Citizen, has grown from a blog to a small gazette to a fully-staffed newspaper. I like this a lot; Iris was always at her best when she was removed, or at least at arm’s length, from Team Flash, being a reporter and doing her own thing. Now, her passion project has become not just a career for her but a piece of the city’s culture. It’s far enough into the series that this feels right, and “Armageddon Part 1” communicates a lot of that growth with visuals: the paper’s office is now a professional-looking floor of a skyscraper with glass doors and fancy desks; the newsroom is bustling with reporters Iris hired rather than her friends; Iris herself is so busy that she needs someone else to handle part of the editorial workload. It’s done perfectly, and in the space of a single scene. 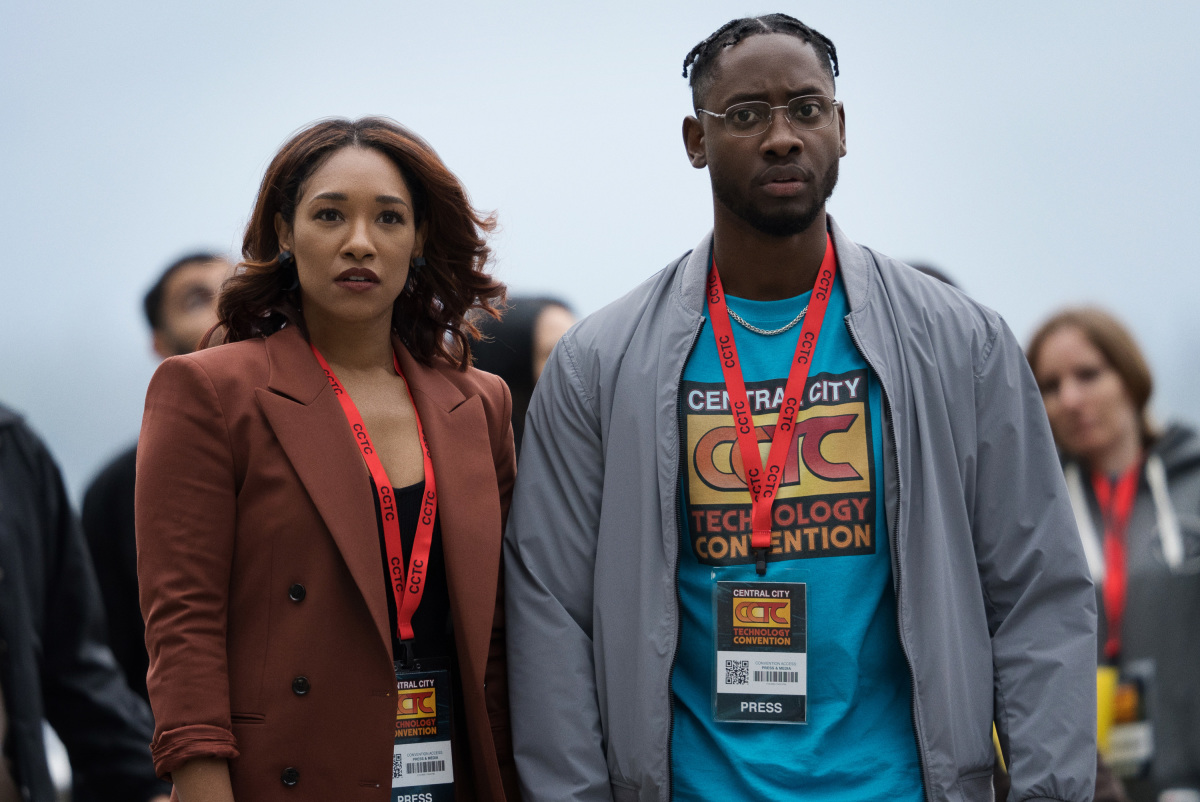 Unfortunately, it leads to a subplot that easily could have been cut. Iris appoints Allegra as her supervising editor, and instead of, say, seeing Caitlin explore her new search for love, or Frost try to get over her bad-boy crush, or Joe do anything at all, we get to watch a nothing character learn to assert herself with people who are better at their job than she is. Allegra and Chester feel like additions to the cast that the producers are determined to make happen, but nothing they do works because the characters themselves just aren’t that interesting. At least Chester ties into Ray Palmer’s storyline, so he feels like he’s important to “Armageddon Part 1.” Allegra is just there, taking time away from the good stuff with a subplot of which we can map out every single beat as soon as it’s introduced.

Ray’s involvement in “Armageddon Part 1” works partly because he’s so out of place. The rest of the characters are content with their lives; Barry is the Flash, Iris’ newspaper is flourishing, Chester is actively involved with Team Flash and the tech conference. But Ray’s floundering. He doesn’t want to be a superhero anymore, he doesn’t want to run a company, and he doesn’t want to do anything but be a family man. That’s fine, but he seems lost and looking for something more. I mean, a guy that rich couldn’t figure out his own accommodations for the conference? Of course, he could have; he just wanted to stay with Barry and Iris. He’s looking for something to energize him, despite saying he wants to leave his old life behind. When he becomes the Atom again, he jumps into superhero action like he never left it. And Chester’s enthusiasm, while channeled inappropriately (can you imagine ambushing someone with two dozen interviews like that?), revitalizes his drive to affect the scientific community. He can do these things and remain somewhat detached, cultivating his family like Barry is – or was, before, ironically, Ray interrupted him. It’s a good setup; now Ray can pop in and out, and it’ll make sense. 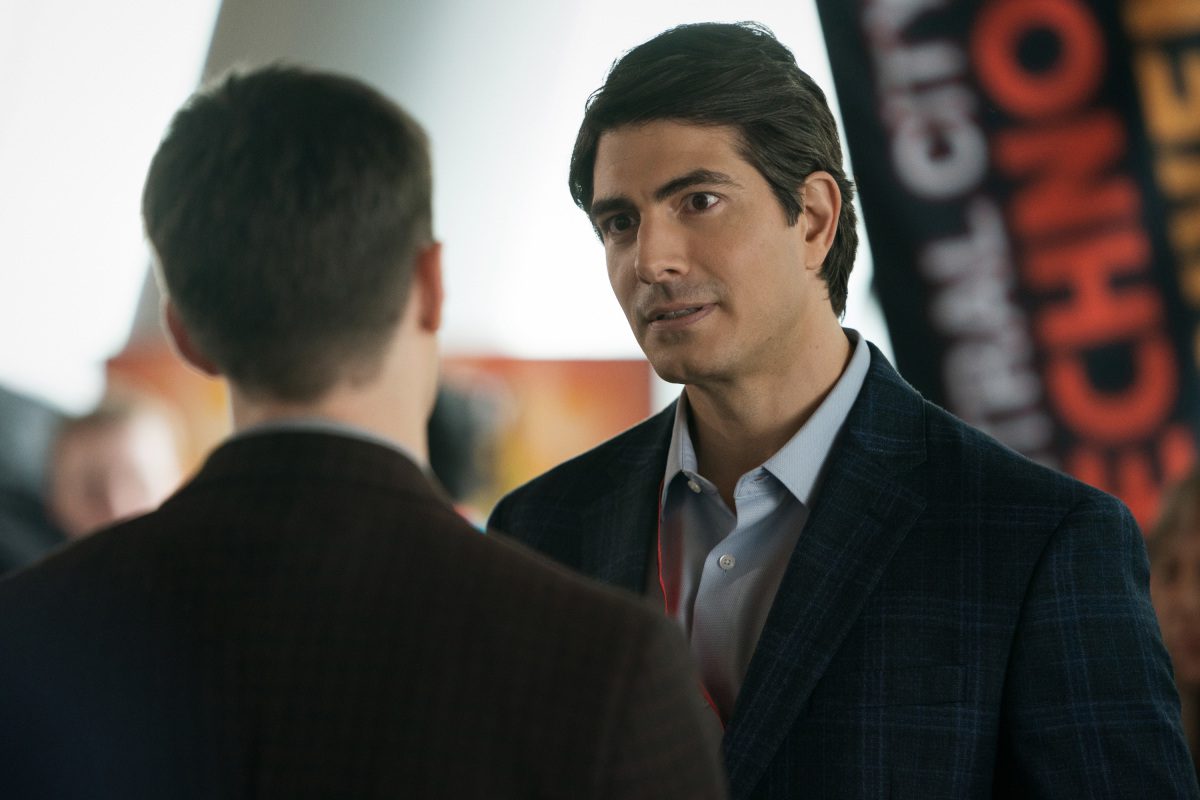 Then, there are the villains, and this is another stumble for “Armageddon Part 1.” The Royal Flush Gang is an annoying group of gimmicky crooks who spout endless playing card puns while carrying out their robberies. They may not be as bad as that bee lady from the first couple of seasons, but they’re approaching her level of cringe. The only good thing about them is how easy it is for the Flash to take them down. They’re clearly lightweights, here to establish that Barry is still being the Flash until the real threat emerges, and their showdown with the show’s hero is appropriately in keeping with their low-tier status. Barry takes them all down in an instant, and not only is it a good demonstration of his powers, but it’s funny. Barry’s amused smile as he rearranges the gang to defeat themselves is perfect, indicating that he’s faced losers like this so many times that beating them is a menial chore. It’s getting to this point that’s the drag.

But the main event is Despero, a massive alien from the future who, for what I assume are budgetary reasons, often looks like Scottish actor Tony Curran. Curran is a real score for The Flash; he’s a terrific actor who’s been in lots of shows and movies over the years. (A friend of mine recommended a film called Calibre, and he was right; it’s excellent and never what you expect it to be.) And he helps make Despero a fascinating villain in just a few scenes. Despero is not evil, at least in his motivations; he’s from a future where the Flash causes the destruction of “our world” and wants to prevent it. And thus returns the classic immediate good vs. greater good theme this show loves; is it worth murdering Barry to save countless lives in the future? And if Barry argues that it isn’t, which is in line with his beliefs, will it seem self-serving rather than ethical? Isn’t a hero supposed to be self-sacrificial? “Armageddon Part 1” leaves it at Barry trying to prove to Despero that he won’t destroy the world, and Despero will allow him a week to do so. But this conflict is far from over, and I’m happy to see The Flash find a fresh way to examine this theme once more. 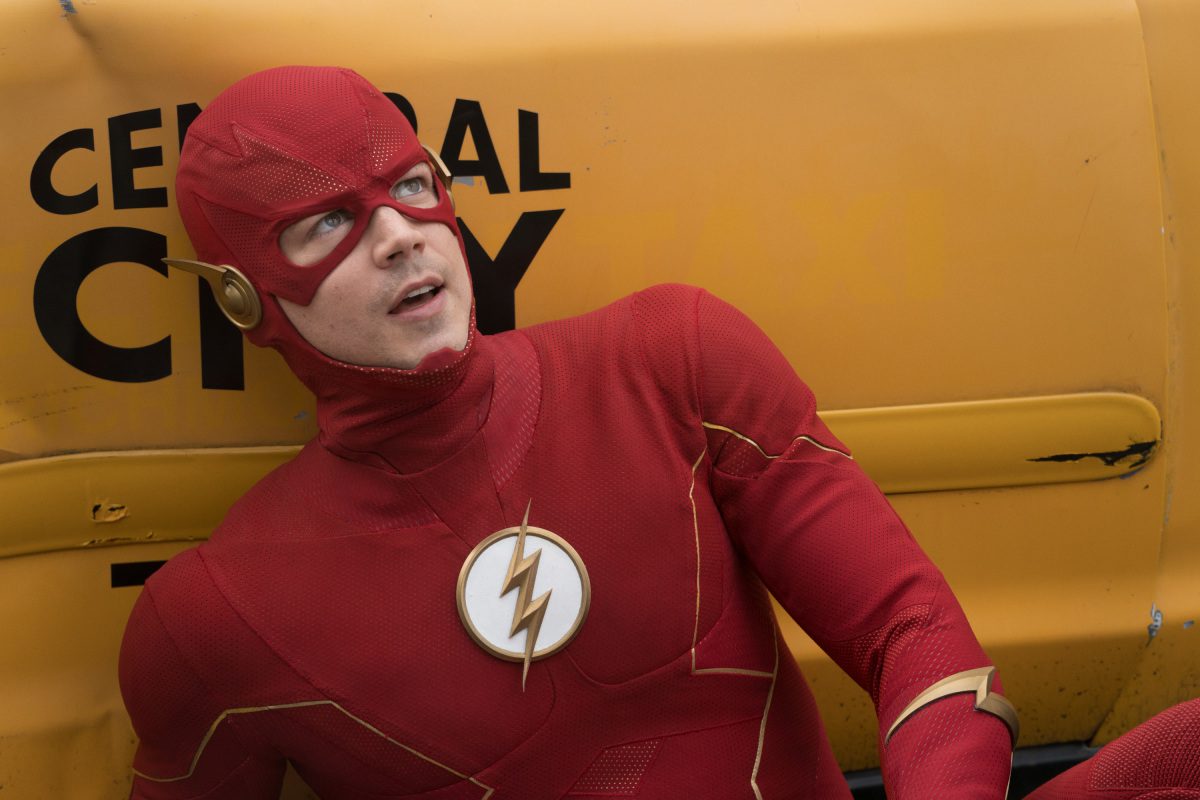 (While it’s a minuscule part of the episode, Kramer’s abandonment of the Metahuman Task Force also figures into this theme. She laments to Barry that they could easily take care of a group like the Royal Flush Gang, and better than the regular cops can. But she also has skin in the game, being a metahuman herself, and like Barry, she’s benefiting directly from being principled and getting rid of her task force. I hope this becomes a bigger part of the season, and they don’t short-shrift this excellent character.)

The biggest problem with Despero is the CGI used to create him. It’s abysmally bad, almost as bad as Fuerza was last year. I know they want to keep Tony Curran around, but they’d have been better off just having a big guy play Despero when he’s in his true form and giving him a paint job while Curran handled the voice. The fights look silly due to the poor special effects, and it’s a shame because Despero is shaping up to be the antagonist this series desperately needs after the last few duds. I have to wonder if they could pump more money into the effects budget by getting rid of some superfluous cast members; we don’t need Allegra, and Cecile does nothing that someone else couldn’t have done better. Even Chester lifts right out; just let Caitlin develop the tech. It’s a bummer because Despero deserves better. 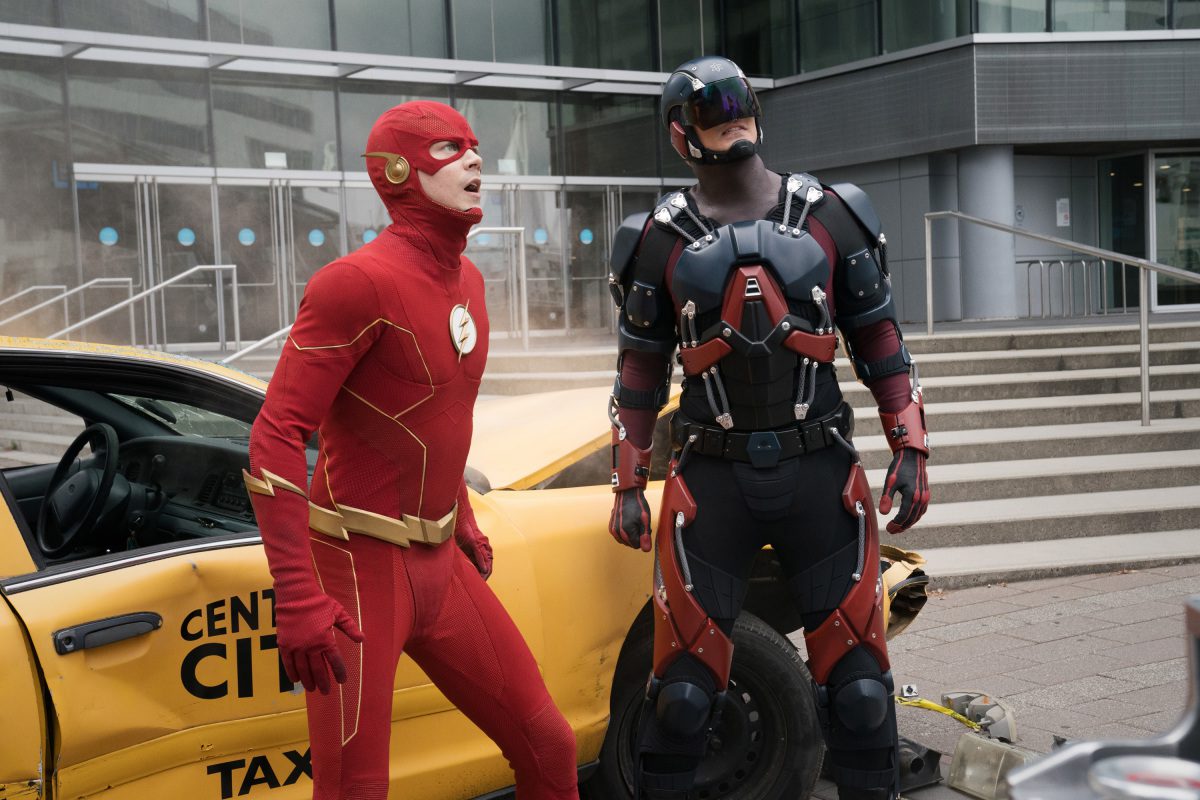 “Armageddon Part 1” is a good start to the new season, and to this crossover event. While the villains of the week are lame, Despero is shaping up to be one of the best antagonists the show has had yet. Iris’ arc has taken a fascinating turn, although I wish it would focus more on her and less on Allegra. The special effects are bad, and some of the humor is worse, but the coming conflict and a new angle on a classic theme are welcome. It may not be perfect, but it’s got me interested in what’s to come.

“Armageddon Part 1” is a good start to the new season, and to this crossover event. While the villains of the week are lame, Despero is shaping up to be one of the best antagonists the show has had yet. Iris’ arc has taken a fascinating turn, although I wish it would focus more on her and less on Allegra. The special effects are bad, and some of the humor is worse, but the coming conflict and a new angle on a classic theme are welcome.