REVIEW: The Guardians of the Galaxy Holiday Special (2022) 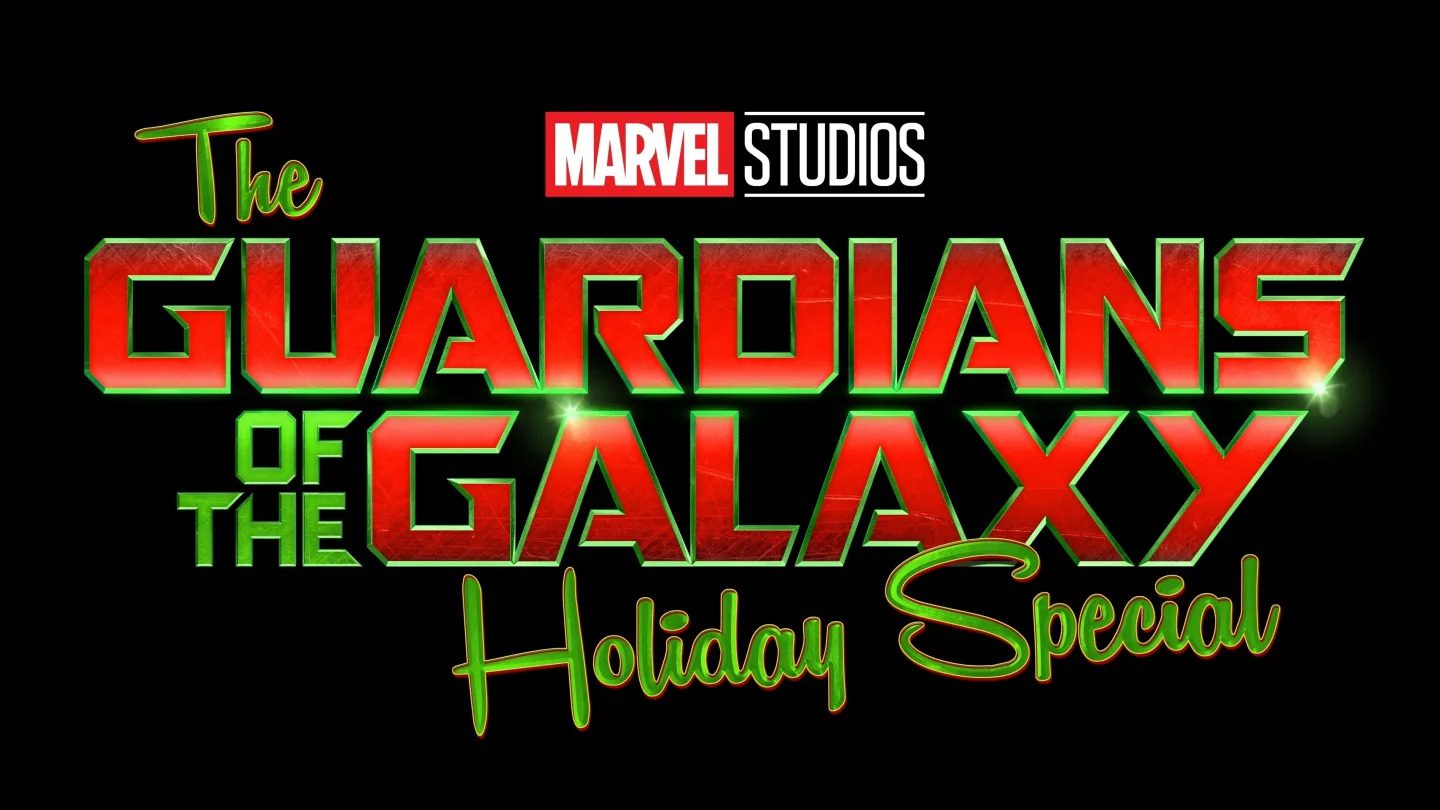 If you’re having trouble getting into the Christmas Spirit, The Guardians of the Galaxy Holiday Special will jump-start the joy in your heart. James Gunn’s early Christmas present is exactly what it needed to be: a fun, heartwarming, hilarious, sentimental special that knows how to entertain and tug at the heartstrings. And needless to say, it’s the best of Marvel’s Disney+ offerings by far.

With Peter Quill down in the dumps after losing Gamora again, his fellow Guardians of the Galaxy realize it’s almost Christmas and resolve to give him the merriest one they can – even if it involves a little kidnapping.

The biggest problem with The Guardians of the Galaxy Holiday Special isn’t the fault of the special itself; it’s the trailer, which gleefully gave away the Kevin Bacon appearance and his role in the plot. It’s a shame because it’s a fantastic idea that would have been a killer reveal. But even though the cat’s been out of the bag for a while now, the plotline works well. Bacon is not just a quick cameo either; he’s a major part of the story. Best of all, he’s treated like a character just as much as the Guardians, and he has a lot of fun lampooning himself, his career, and his profession.

And he’s not alone because The Guardians of the Galaxy Holiday Special is a lot of fun. The tone is about the same as the Guardians films, albeit with less violence and no villains or universe-ending catastrophes. This is just a good time with some people we love seeing, and the Guardians are all in-character no matter what happens in the story. As the trailer and poster suggested, Drax and Mantis are the leads, and they make a good team. Instead of pairing one of them with a more logical-thinking character to act as their minder, their naïveté has no anchor, meaning they’re let loose on an unsuspecting Earth like a couple of goofy time bombs. Watching them try to navigate a planet they only visited once (for a massive battle with an evil overlord and his army) is hysterical, as are their attempts to understand Christmas. 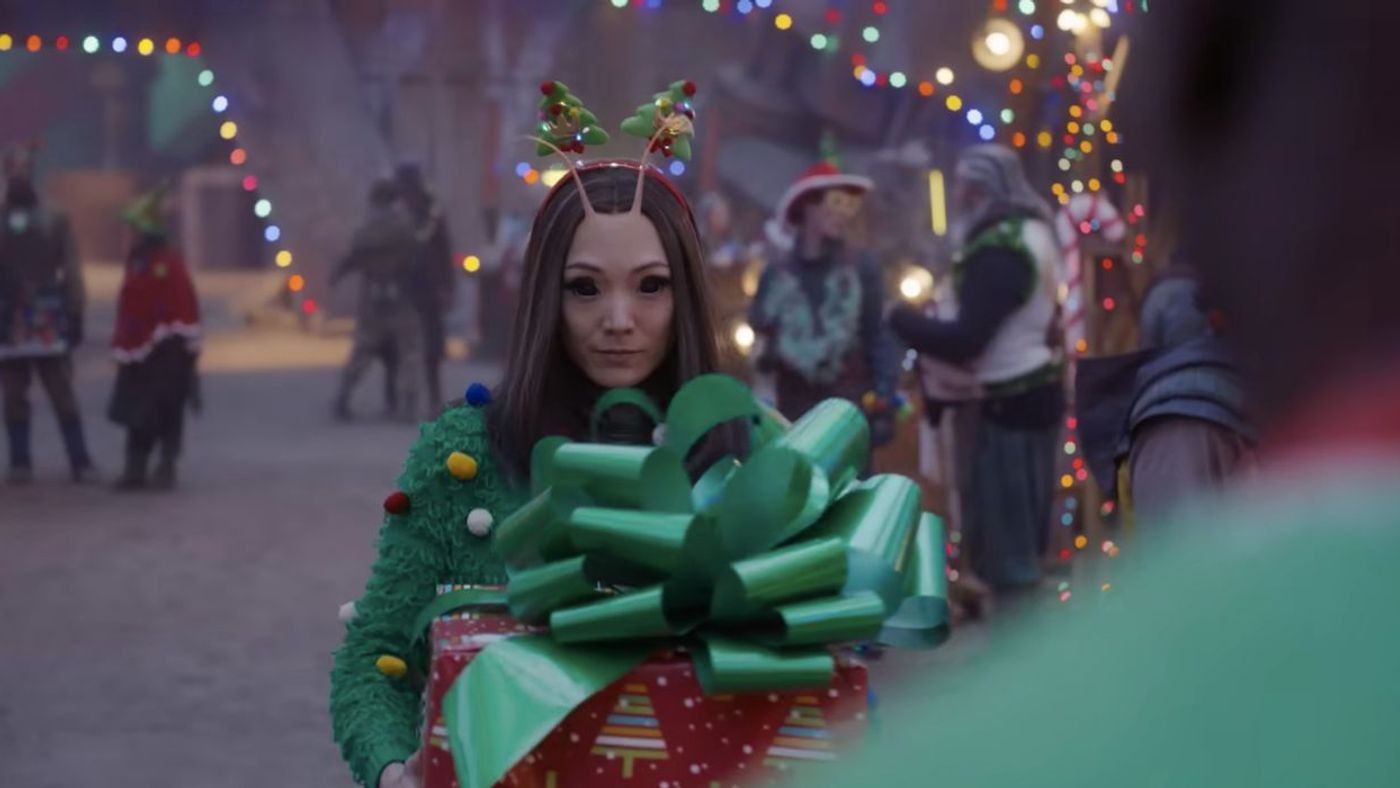 That’s true of almost everyone else, too. Aside from Peter, everyone is an alien and has no conception of Christmas (aside from one other character), so they’re all flying by the seat of their pants in trying to put together the perfect one for their friend. This is great because it’s very much like seeing Christmas through children’s eyes; the innocence of the Guardians captures what it’s like for boys and girls when their parents first tell them about Christmas, with each new reveal like an opened present on Christmas Morning. And their reactions are unique to each character – Nebula is cynical and dismissive, while Rocket vacillates from excited to frustrated, for example. It demonstrates why the Guardians are unique among the MCU stable; this wouldn’t work with anyone else.

It wouldn’t have worked without James Gunn, either. This is what sets it apart from the rest of the dreck Marvel has put on Disney+ (with one exception). Gunn wasn’t just some rando hired to put together a pre-planned(ish) product intended to prop up the movies. This was his idea, one he went to Kevin Feige with and was allowed to film, and his love for the characters and the story – and for Christmas – shows throughout The Guardians of the Galaxy Holiday Special. His oddball sensibilities permeate the special via creative scene transitions, or the way action is filmed in the background, with zaniness and just a touch of… I don’t want to say “horror,” exactly, but I can see why Kevin Bacon would feel that way. And Gunn’s filmmaking experience is evident because, unlike most of the downright ugly-looking shows in the Marvel catalogue, this is fluidly shot and always dynamic, even in a quiet scene. 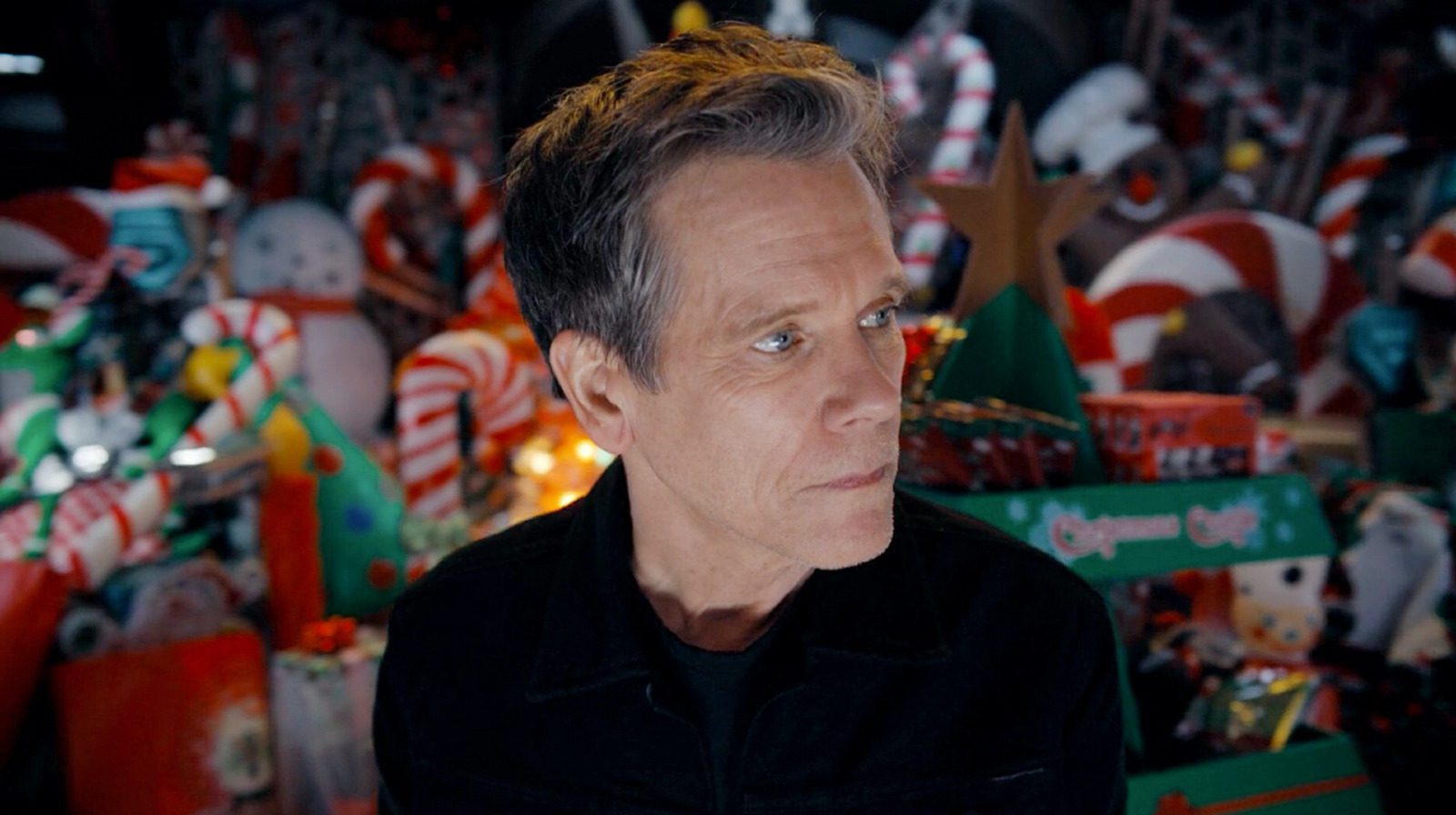 And it looks great, too! The production values in The Guardians of the Galaxy Holiday Special are spectacular, leagues above the usual Marvel streaming efforts. To an extent, the comparison is unfair; Gunn filmed this while also making Guardians of the Galaxy Vol. 3 and had all the resources of a huge blockbuster movie at his disposal. But the shows have been so bad, so rushed, so carelessly slapped together that it’s impossible not to notice the stark contrast. It isn’t just the cosmic special effects, alien makeup, and sci-fi sets, though. The Earth-based locations are great, too, down to Kevin Bacon’s Hollywood mansion. Everywhere the Guardians go feels like a wonderland of fun and fantasy, something we couldn’t imagine even if it’s technically right next door (or however far away from L.A. you happen to be).

Not the least of these has to do with the Most Wonderful Time of the Year. The Guardians of the Galaxy Holiday Special is punch-drunk in love with Christmas, and that’s evident in every frame of it. The decorations, even the simplest ones, look wondrous when lit up, inviting us to get into the Spirit. Even beyond the aesthetics, Christmas is essential to the story, with the love and fellowship it brings touching the characters and bringing lost souls together – another reason this had to be about the Guardians. There’s a big revelation in this special, and unlike She-Hulk, which had Matt Murdoch toss an even bigger reveal away with an offhand comment, you can feel the weight of this one because of what it means to the people involved. Christmas amplifies that, and it means even more when it’s out there. There’s no woke nonsense, no forced politics, no avoidance of the word “Christmas;” this is a fun story for everybody that wears its Christmas Spirit on its sleeve, and thank God for that. And wait till you hear the music! 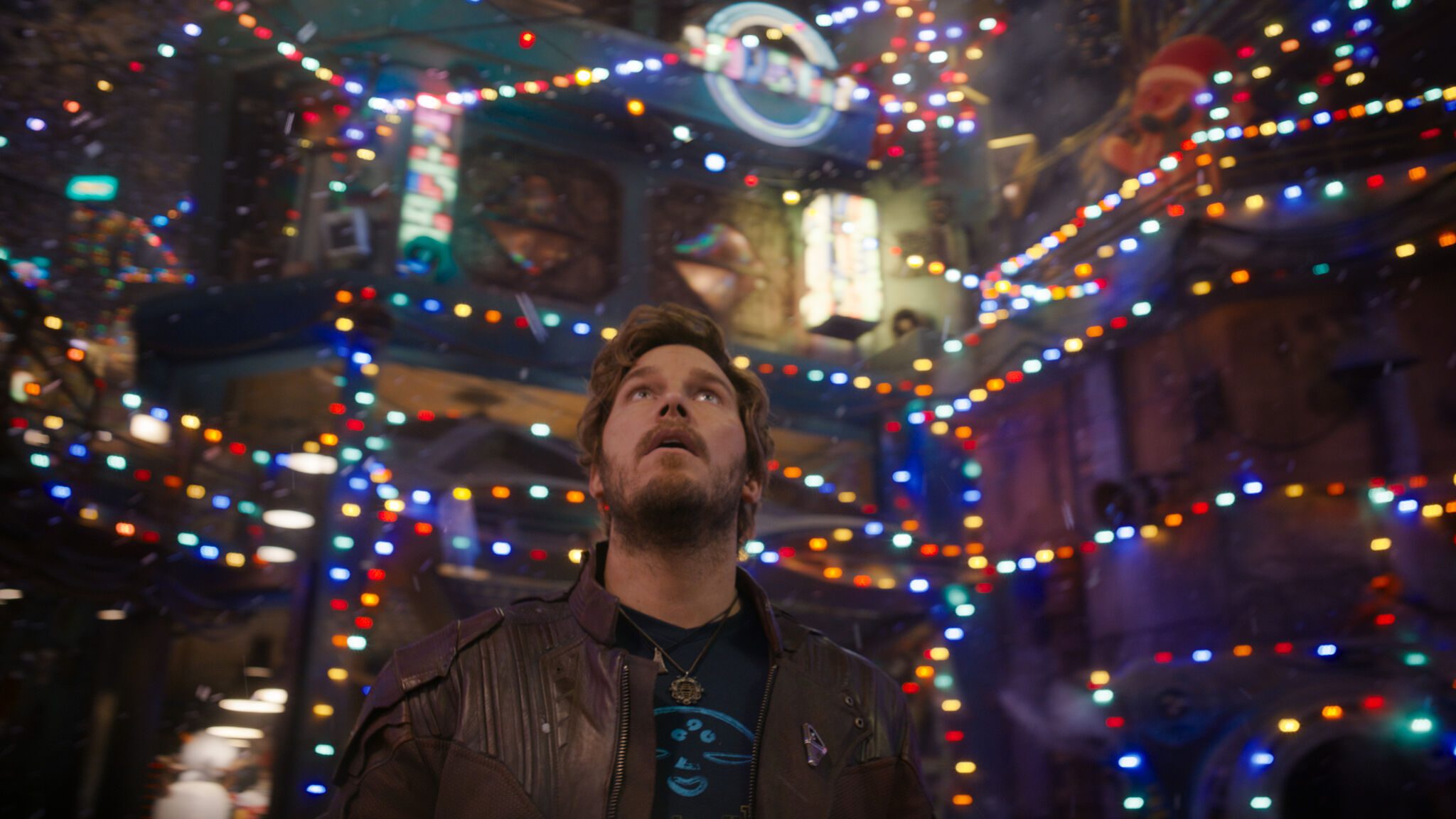 What a magnificent way to kick off the Christmas Season! The Guardians of the Galaxy Holiday Special is everything you could want it to be and as good as you wish the rest of the Marvel shows on Disney+ were. This is one a lot of people will revisit every Christmas.

The Guardians of the Galaxy Holiday Special (2022)

With fun, heart, humor, and a sugary bowl of Christmas cheer, The Guardians of the Galaxy Holiday Special is a fantastic throwback to the Christmas specials of old. The characters fit the story perfectly, and Kevin Bacon makes a wonderful addition to James Gunn’s section of the MCU.