REVIEW: The Lord of the Rings: The Rings of Power – Season 1, Episode 5, “Partings” 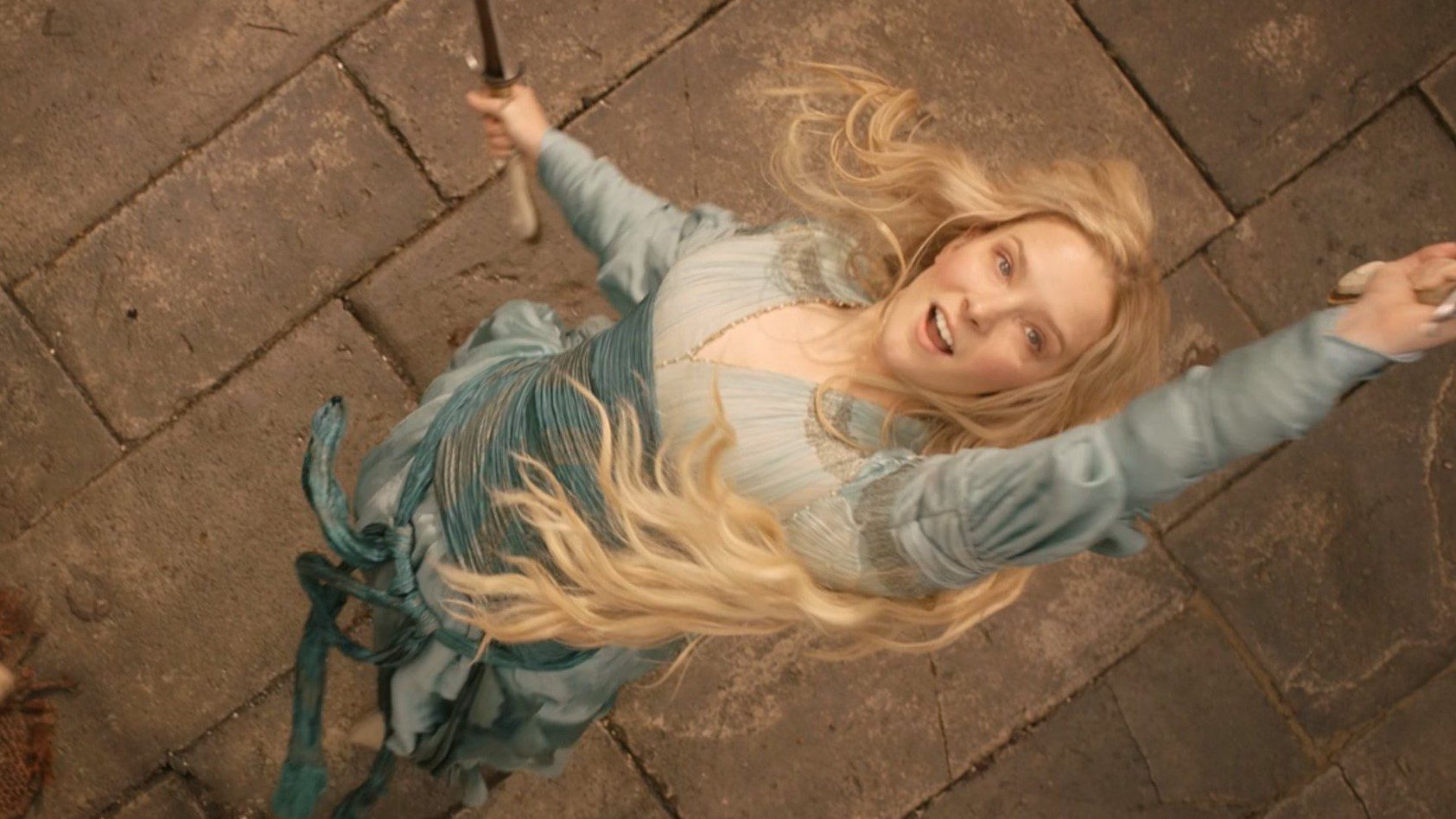 Five episodes into The Lord of the Rings: The Rings of Power and only a single thing is clear: The CIA no longer needs to resort to waterboarding anyone; they merely need to force them to watch this abysmal show, which is tantamount to torture, and no hardened criminal or terrorist will resist divulging whatever information they want. Beyond that, the show serves no other purpose. It is easily of the worst written television shows to ever be conjured. No amount of excuses or minor corrections could redeem Rings of Power; it is broken on nearly every conceivable level. Anything that might be redeemable about the show is torn asunder and mocked by the rest of each episode. Episode 5, “Partings,” is no exception.

Like the previous episodes, “Partings” is allergic to portraying any scenes of note. Similar to how the dwarven cave-in was completely cut out in the last episode, this one constantly cuts away from anything that could remotely be of interest to the audience, choosing horrific dialogue and bad character moments over any potential for quality. This, combined with rampant continuity and time passage problems, define this episode more than its predecessors. “Partings” might eke out a minimal lead ahead of the previous episodes merely by benefiting from less Galadriel and less of the Harfoots than would be expected, and as a result, far less awful non-sequitur dialogue. Some may consider continuity errors to be of greater concern than dialogue and character issues, but for the majority, this episode will be slightly better due to the rebalancing of these specific issues.

“Partings” also offers little in terms of essential plot, resorting to countless minutes of bloat and padding to draw out the runtime. This episode is another example of events that should only take 15 minutes or so to deliver to the audience. Galadriel’s plotline is just convincing Halbrand to go with them to Middle Earth. He doesn’t want to initially, but he randomly changes his mind. Elrond is told that Durin’s mithril will save the elves from dying. He doesn’t want to break his oath to Durin but does anyway. The Harfoots migrate a little, fight some wolves, and the Stranger scares Nori. Finally, some of the humans in the elven tower decide to be bad guys with the orcs, while the others just sit around. Once again, that is the sum total of important information for the audience. To say this episode is bloated is, once again, an egregious understatement.

The episode starts with a montage of the Harfoots migrating, the Indiana Jones line moving across the map cliché suddenly making a comeback, while a terrible song is sung by discount Sam. Beyond the cringe nature of this montage, the larger issues it creates are, again, with the passage of time. It seemed impossible for the passage of time to be as broken as it was in “The Great Wave” when the elven tower was getting built. However, “Partings” manages to outdo it. The Harfoots spend weeks migrating in this montage, but the humans only have a day or so during the same interim. The elves and dwarves only have a couple of days, and Galadriel barely has a week.

Being as generous as possible by including the runtime of the previous episode (which did not feature the Harfoots at all), there’s no possible way that the Harfoots could travel that distance in the time displayed while far less occurred in the other plotlines. This issue would be far less enormous if there were never any suggestion that all these plotlines are happening concurrently. However, the inclusion of the Stranger’s fiery fall to earth being seen by all the different characters simultaneously firmly cements these events as concurrent. There is no possible way that these events can happen simultaneously, yet this show insists they do. These writers have no concept of the passage of time and care not for how one event leads to another or connects to the other storylines. Time and continuity are fundamentally broken in Rings of Power. If these two cornerstones have eroded so wholly, can this show even be described as a story at all? 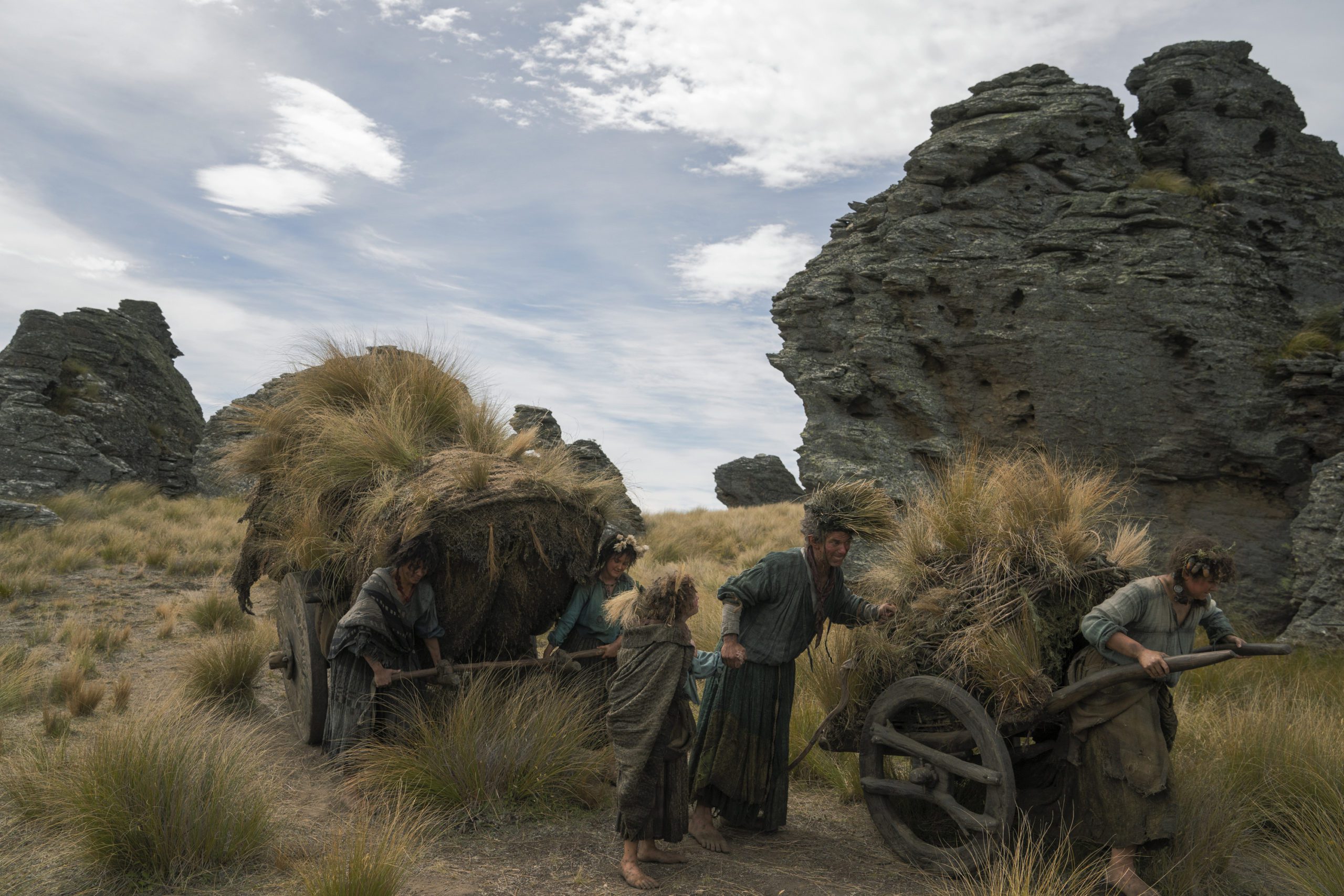 “Partings” does not only fail a cohesive continuity test in terms of scenes connecting to one another but in character consistency. As with “The Great Wave,” which saw the Númenóreans flip-flopping between pro and anti-elf at a whim, the crowd at the elven tower is equally inconsistent. Bronwyn attempts to inspire them to fight back against the orcs in one of the most pathetic inspirational speeches ever put to screen, starting with, “I know I’m not your king.” No crap, she’s not their king. These are just a couple of towns grouped together, nowhere near a large enough group to warrant “king” as a title. Additionally, Bronwyn has absolutely no reason to be their leader by any definition. She merely saw the orcs first. That does not give her the right to leadership. Especially after this lackluster speech, she has zero qualifications to lead these people.

Despite this, they repeat their “Spartacus volunteering to help” moment from the previous episode, with nearly all the village folk volunteering to fight. Then, the people’s allegiances immediately change when an old man says that being evil saved their ancestors’ lives. Suddenly evil, the townsfolk split into half, some following the old man in swearing allegiance to Sauron. This show cares not for proper character motivation from an individual character standpoint nor even for a greater crowd. There is absolutely no reason why these people should change their minds suddenly from, “We’re going to follow Bronwyn into battle,” to, “Bronwyn is not good enough; let’s go be evil together.” Crowds and characters flip on a dime to service whatever measly plot contrivance the writers have conjured for that particular moment, without regard for how it will connect to the next plot-related moment. 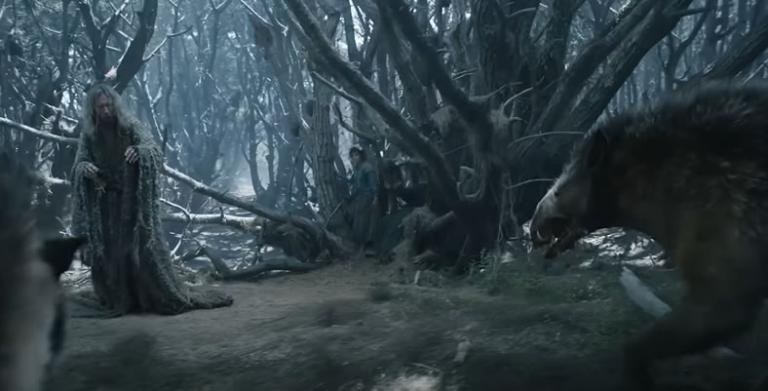 Normally, television CGI should not be overly criticized, but this is the most expensive TV show ever made. The wolves that attack the Harfoots look more at home in a PS2 cutscene than in a series of this caliber. Beyond the terrible CGI, the actions of the wolves don’t make any sense. The first episode set them up in the berry patch to be near the Harfoots and stalk them. However, for some inexplicable reason, they follow the Harfoots’ migration before randomly deciding to attack them. That is not where the issues with these wolves end. The conflict between the wolves and not-Gandalf has been set up since the earliest trailers and by that first episode. When this final moment comes in payoff to that setup, not-Gandalf just hits the ground a little, and it’s over. It is the most underwhelming payoff ever put to screen, another prime example of an opportunity to show an interesting action sequence that the audience might enjoy getting cut out, as if the writers are averse to any potentially decent scene.

Following this insane fight sequence, not-Gandalf attempts to heal an injury he got in the fight by freezing it in water. For some inexplicable reason, this freaks out Nori more than the other crazy things, such as darkening the woods and killing fireflies, that not-Gandalf has done up to this point. She decides to be an idiot and touch his frozen arm, getting herself frozen. This is enough for her to suddenly reject not-Gandalf and run off frightened, only for this conflict to be resolved as soon as they’re shown in the next episode. This is a cheap and contrived CW conflict that has no broader impact on the story but to pad the runtime and make it seem as if these characters have logical emotions. They do not. This conflict is irrelevant and will be resolved near instantly. 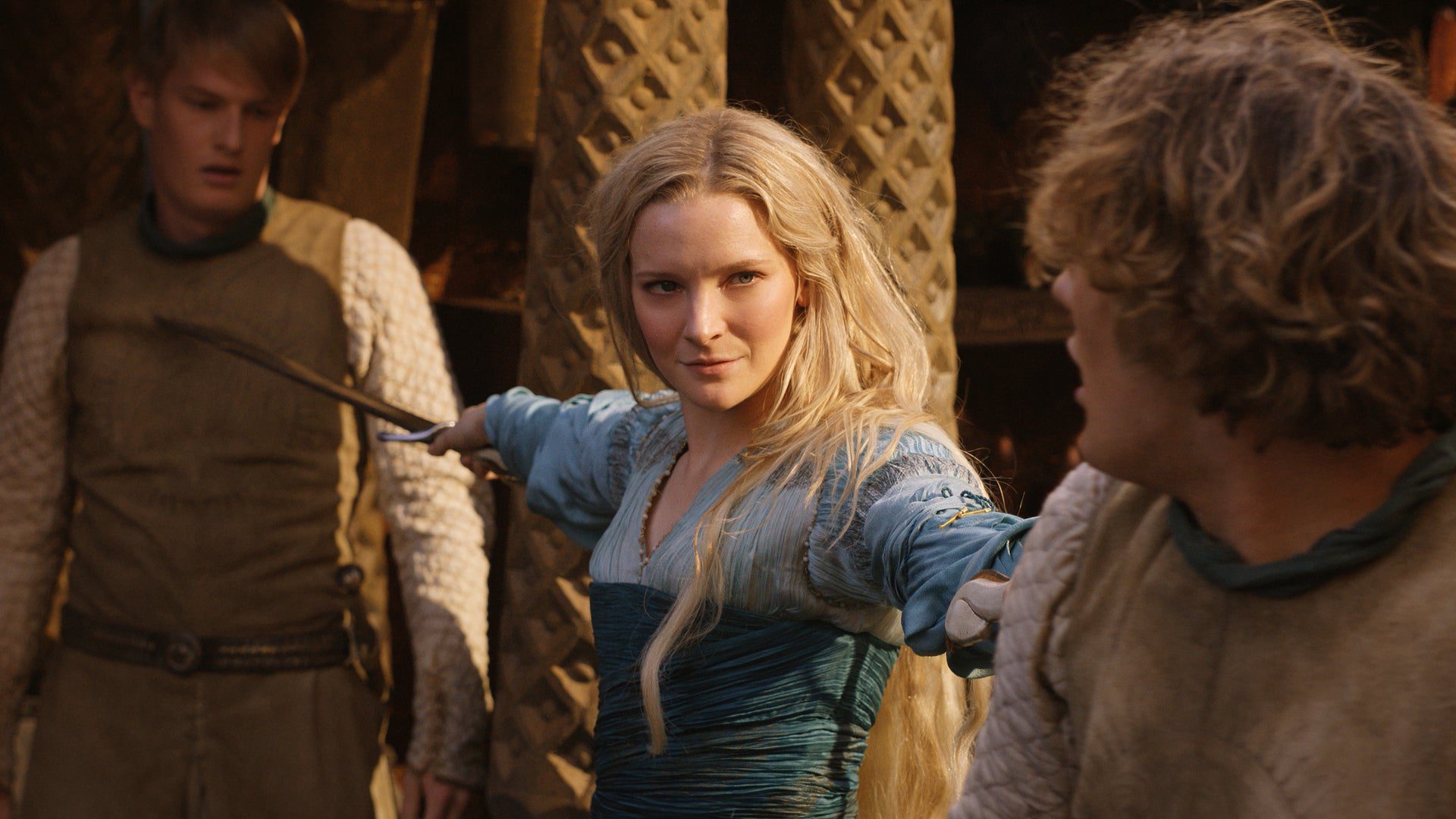 The episode’s central action sequence sees Galadriel training some Númenórean soldiers in sword fighting. This sequence is horribly choreographed and damages the characters involved. Galadriel is prideful and arrogant, while all others are stupid and useless. Additionally, using woke and SJW reasoning inversed, Galadriel sexually assaults one of the Númenóreans by spanking him with her sword. If the genders were reversed, Twitter would be up in arms about this moment. As it stands, it is a bastion of hypocrisy that stands in condemnation of the feminist motivations behind Galadriel’s character. In a normal world, this wouldn’t be a big deal but woke Twitter made it a big deal, so it bears mentioning here.

“Partings” depicts Elrond as a bad friend and an idiot, only saved by the fact that the characters surrounding him are even more stupid than he is. With little to no prodding, he reveals the big dwarven secret Durin had made him swear to conceal. When Gil-Galad mentions mithril and Elrond says, “So, Durin was right,” he’s already broken his promise and told Durin’s secret to Gil-Galad. However, Gil-Galad is so stupid that he doesn’t pick up on this and continues to ask if the dwarves have mithril. Elrond has already broken his oath, but he spends the rest of “Partings” asking people if he should break his oath. Then, he gives the mithril he possesses to Celebrimbor to examine, again breaking his oath, but both he and Celebrimbor act as if this is not confirmation that mithril exists. Celebrimbor spends the entire conversation trying to convince Elrond to break his oath. That ship sailed a very long time ago and didn’t make any sense.

After all this nonsense, Elrond tells Durin the truth, and the dwarf doesn’t care. Durin has suspected Elrond throughout this entire series but suddenly believes everything Elrond is telling him while acting as if Elrond has not broken his oath. All these characters come across as insanely idiotic, eroding what little likability some of them had gleaned from the filth episode of this series. Adding insult to injury, Gil-Galad is just somehow within range of this conversation to get confirmation of everything he should have already known. 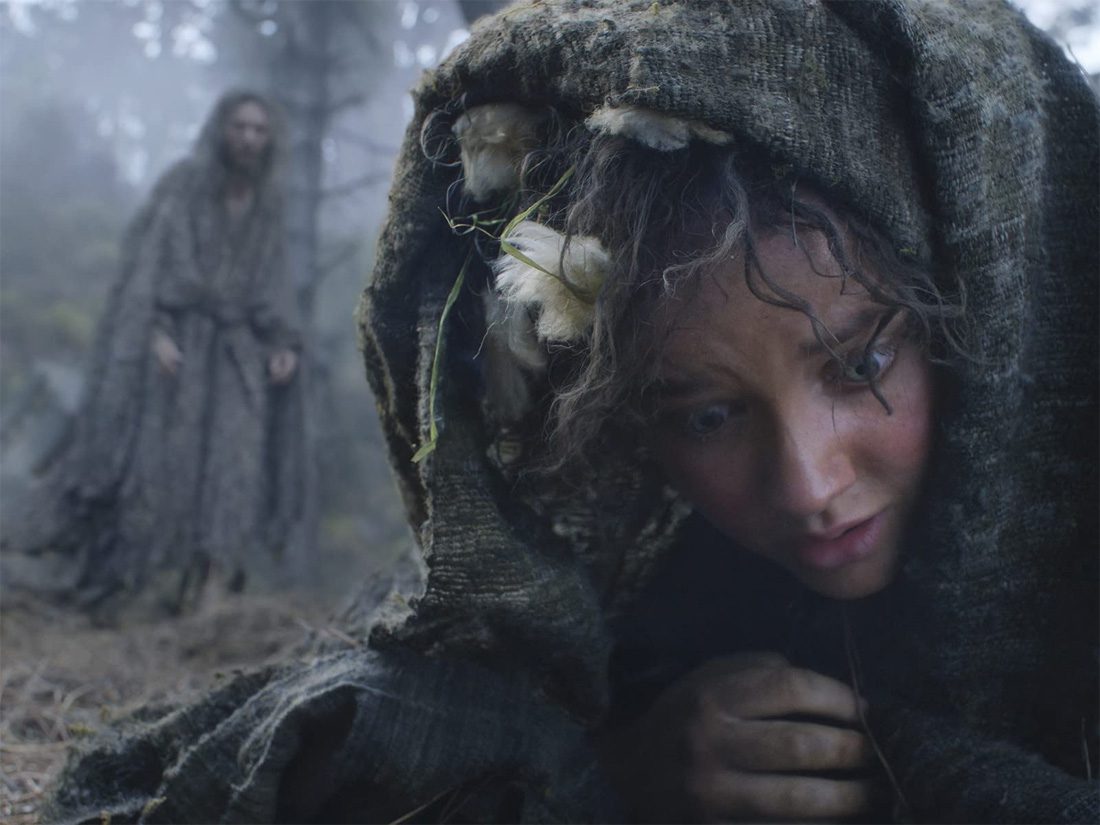 The issues with“Partings” mentioned above are roughly 5% of its problems. There is far too much broken in this episode to explain here. This series is utterly broken, deserving no praise or leniency. No area of this episode, even the production side of things, deserves praise. The CGI is terrible, the costuming is still cheap, the set designs are average at best, and the horrific scale armor from the promotional material is included. There is virtually nothing redeemable about this episode or this series. This billion-dollar disaster is an affront to the senses and an insult to all intelligent viewers. “Partings” is just as bad as all the rest.

There is virtually nothing redeemable about this episode and this series. This billion-dollar disaster is an affront to the senses and an insult to all intelligent viewers. “Partings” is just as bad as all the rest.