REVIEW: The Luminaries – Season 1 Episode 2, “The Place You Return” 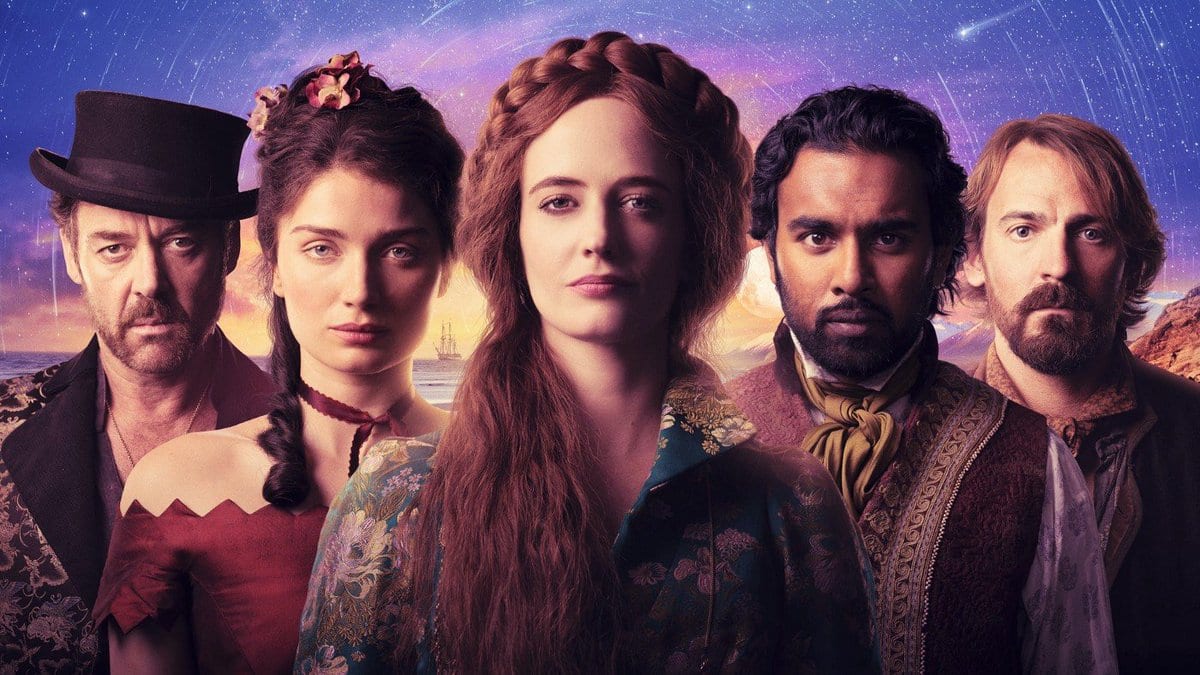 “The Place You Return” begins right where “Fingerprint” left off, with Anna being introduced to Lydia’s husband, Crosbie Wells. After gloating about his prospected gold bag, Crosbie treats Anna to the story of how he and Lydia met. Crosbie miraculously won the jackpot on Lydia’s prize wheel, and as such, Lydia had to marry him. Lydia isn’t amused and insists he go to bed. Later that night, Anna lies awake as she hears Mrs. Wells sneak down the stairs. Anna follows Lydia out of the house and hears a conversation between her and Francis Carver. Mr. Carver suggests that the Wellses are about to be robbed, but Lydia remarks that she has a better idea, one that could give Francis everything he lost when he went to prison. He responds that she’d have to get rid of Anna despite her value to the saloon, informing Lydia of Emery Staines’ search for the girl. In the present, Anna offers the judge some gold for his help. He refuses, telling her that while he’s not sure who she’s lying for, he wants no part of it. Anna stashes her remaining gold in the floorboards of her room at Lydia’s. In the past, Lydia plans a banquet to celebrate Crosbie’s success over breakfast with him and a suspicious Anna. Meanwhile, Emery takes out an ad in the paper. Anna finds a bloody man in the streets, and he makes her promise not to get a doctor or tell anyone. She gives him laudanum for the pain, and he tells her his name is Sook. Emery discovers his friends have left the hotel, leaving him with the bill. Francis finds Emery and tells him he’ll need to sell something for more money. After preparing the Wellses meal, Anna gets Emery’s address. However, when she gets there, he has already left the hotel. Emery fishes with Carver, who tells him about Sook, the man who attacked him and whom he left bloodied in the street. Anna confronts Lydia about giving her the wrong address for Emery’s hotel, and she deflects, saying that Emery himself must have tricked her and skipped town. Anna tells Crosbie that she’s running from who she used to be.

In the present, Anna goes to the scene where Crosbie’s corpse was found. She and an inspector struggle to put the sequence of events together. In the past, Carver tricks Emery into thinking Anna already left to look for gold. Emery signs his contract and heads off. Anna tells Crosbie that Lydia stole her purse, and he tells her not to take it personally. In the present, the inspector who met Anna at the crime scene tells his associate about what they discussed. His friend insists that Anna is just a whore who’s good at acting and must be the culprit. In the past, Crosbie takes Anna out shooting, and Lydia meets a Mr. Lauderback at a bar for a drink. Francis storms out as he sees Lydia nuzzling Lauderback’s neck. Anna tells Crosbie about Lydia’s late-night rendezvous with Carver. He responds that he knows what kind of woman Lydia is and tells Anna how he came to New Zealand. Emery falls overboard on his trip as Anna gives in to Crosbie’s advances. In the future, Anna questions Tauwhare about Emery, but he’s convinced she killed him and scares her off. In the past, Lydia plans a party and gives Anna and Crosbie a drink but doesn’t partake. They both collapse as Lydia stuffs Crosbie’s gold into the pink dress Anna is later found wearing. 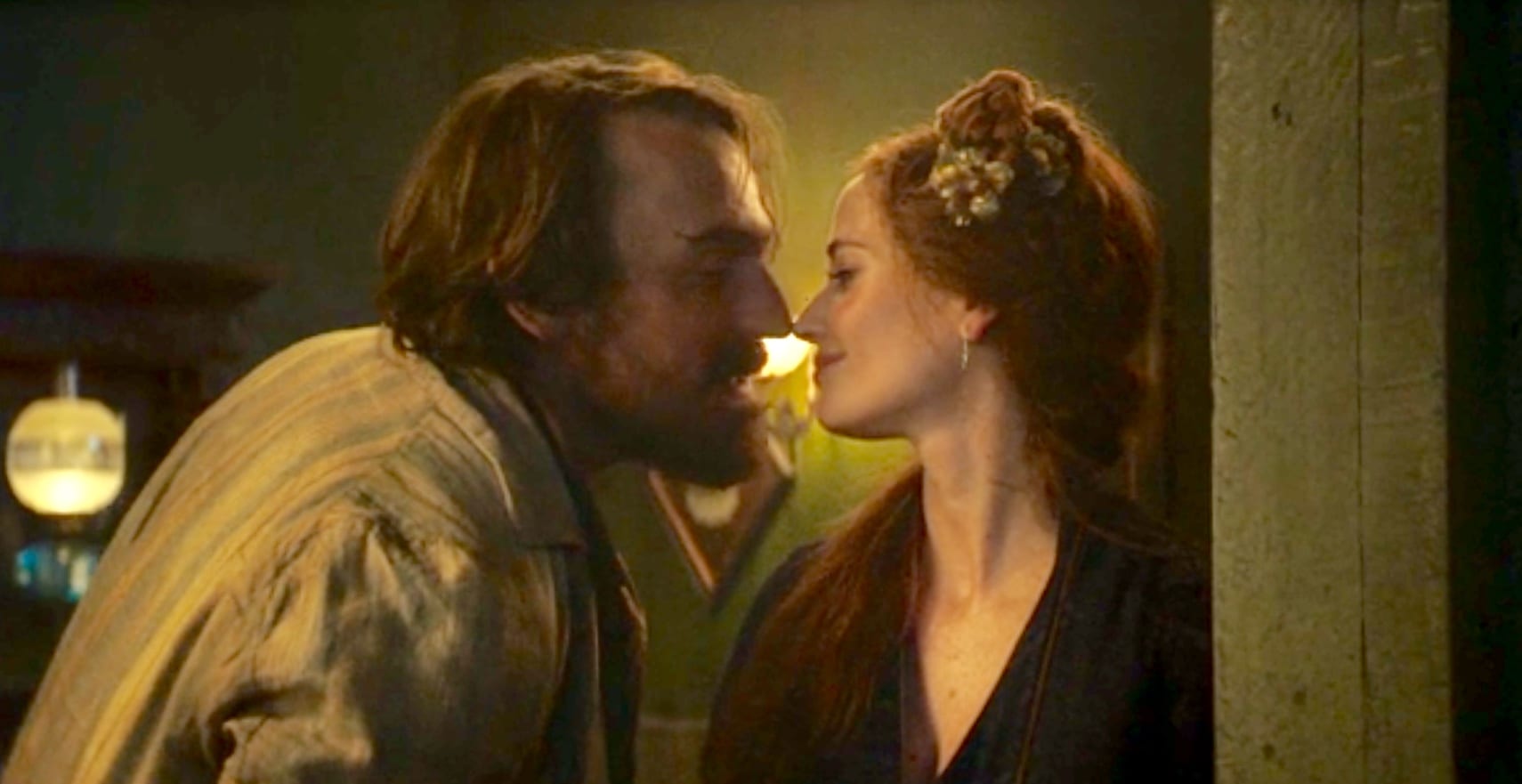 I didn’t care much for last week’s pilot, “Fingerprint,” and unfortunately, “The Place You Return” isn’t exactly the improvement I was hoping for. Eva Green is still enchanting and deliciously manipulative as Lydia, but the fact that I’m rooting for the villain isn’t exactly a point in the show’s favor. I’m continually surprised by just how stupid and easily manipulated Anna is, which I guess makes me the real dummy. I can’t understand why she didn’t take her purse and run when she found it, rather than putting it back and playing along. As we can clearly see in the flashes forward, it’s not like Anna had some brilliant plan to counter Lydia’s meddling. She’s putty in this woman’s hands. How did someone this clueless even obtain enough money and a ticket to come here? Why is she so trusting of every person she meets? Despite what she’s experienced with Lydia, she’s still willing to work for her, search for Emery, and get sexually involved with Crosbie. That last one is just mind-numbingly stupid. She’s now slept with the husband of the woman who has been using and tricking her. And it’s not like she knows Crosbie that well. Why is she so comfortable telling him about Lydia stealing her purse? What if he was involved in the theft himself? Anna seems to automatically assume people are on her side and perfectly trustworthy. 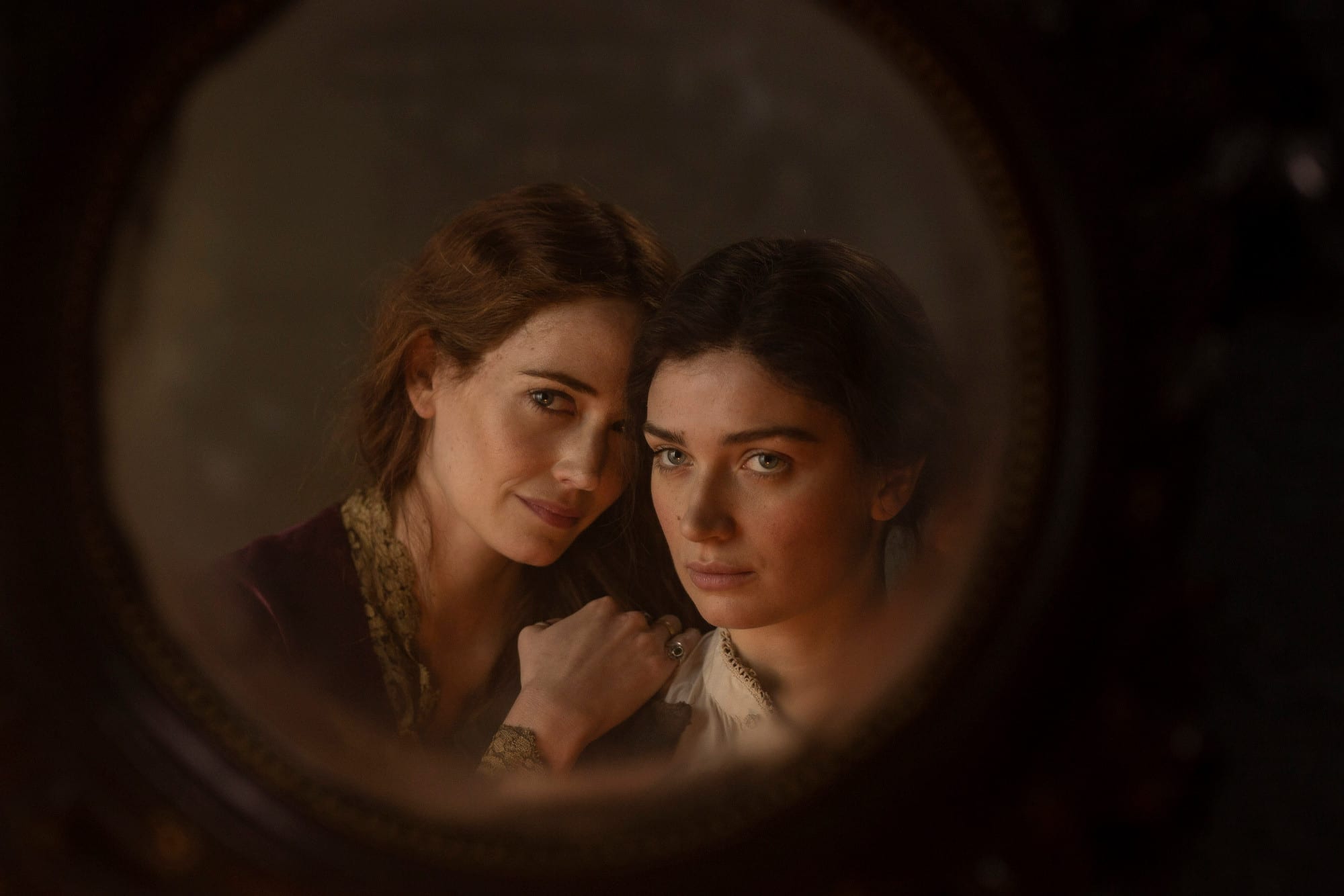 This brings me to another big issue I have with these characters and the show itself. Everything we see and are expected to care about hinges on the initial meeting of Emery and Anna. They’re both still searching for one another in “The Place You Return,” and Emery is beside himself when he’s mistakenly informed that Anna died in a shipwreck. And even when she’s employed at Lydia’s establishment, Anna still does everything she can to find Emery. It’s not even clear if Anna believes it when Lydia tells her that Emery probably left town without her. My problem is that I didn’t find their initial meeting strong enough to support this entire premise. There wasn’t any great chemistry (which I blame more on the writing and direction than the actors), and it’s not clear what they see in one another. Most people would conclude that they were stood up after the meeting in the bar didn’t happen. Even though Carver and Lydia are lying schemers with ulterior motives, what they say makes more sense than what Anna and Emery are doing. This could work to the show’s advantage if the leads were likable, and we could understand why they so desperately wanted to reunite. The show’s reasoning for this potential coupling is that being born simultaneously, they’re “astral twins.” I’m having Rise of Skywalker flashbacks here, and that’s not a compliment. Giving your characters a supernatural, magical reason to be together isn’t very interesting to me. If Emery and Anna had some meaningful conversations or an instantaneous connection, that would be more compelling than just saying they’re astral twins. This lack of charisma and chemistry with the leads extends to pretty much the entire cast, except Green. Emery and Tauwhare are supposed to develop a friendship in this episode, and I just don’t feel it. Lydia seduces Lauderback, and it’s not convincing at all. It just feels like what it is: two actors making out for a TV show. But it’s not supposed to feel like that; it should feel real to the audience. Make this woman the slimiest person ever and the man a fool who can’t see through her tricks. Or give them genuine feelings for one another; I don’t really care, but make your audience feel something. It’s difficult to care about the characters in The Luminaries when I don’t believe in them or their relationships. 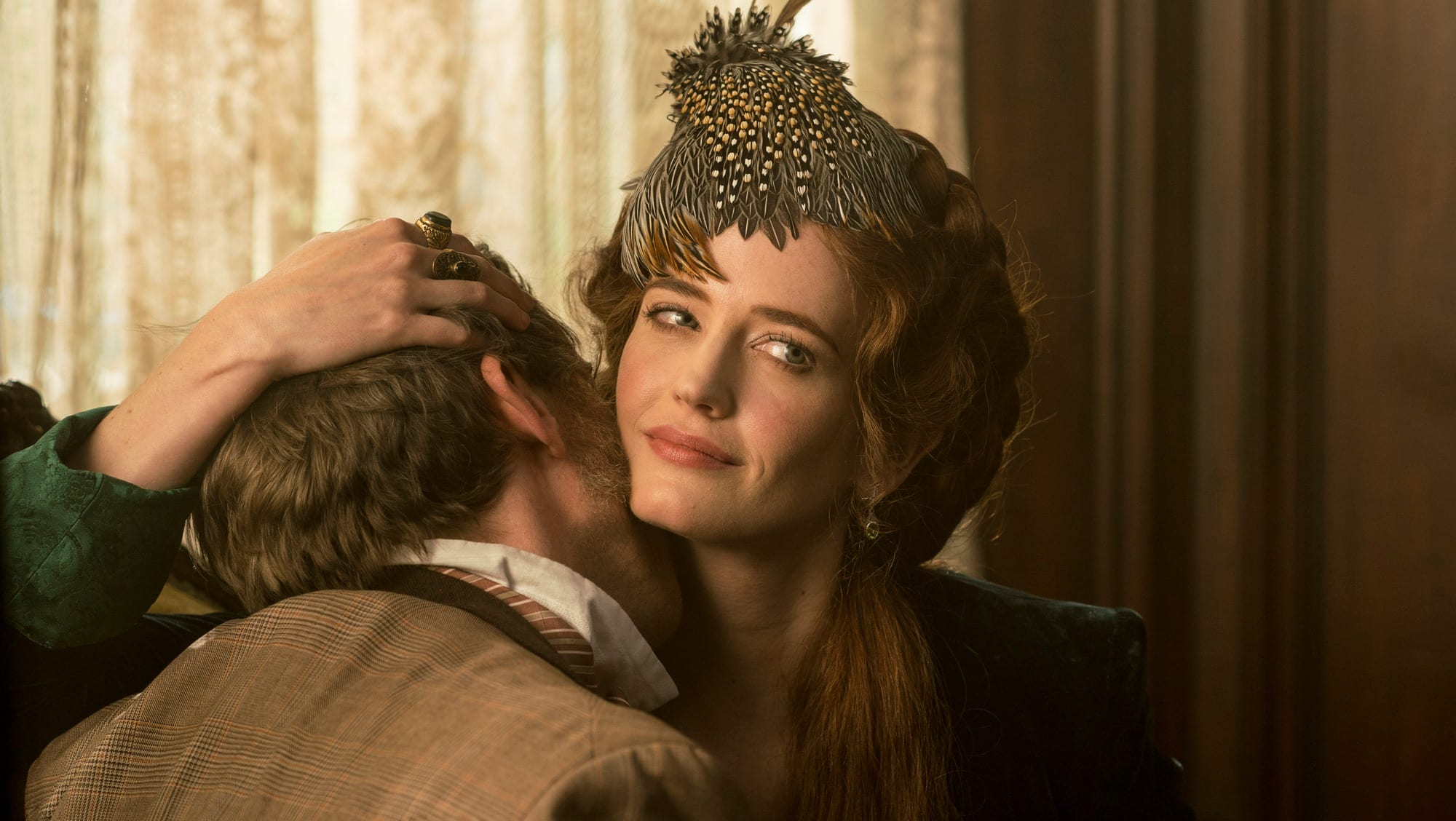 If I have to critique Lydia Wells, I wish her goal was something more sinister than being with her true love. Again, I’m sympathizing with the villain, and I don’t think that was the creator’s intent with this series. I enjoy a likable villain as much as the next person, but Lydia is stealing the show both in entertainment and relatability. Eva Green deserves worker’s compensation for back injury since she carries (at least) both of the first episodes on her back. Her American accent comes and goes, and is a little distracting. For that matter, I’m not sure why she needs to do one when the other actors speak with English or kiwi accents. 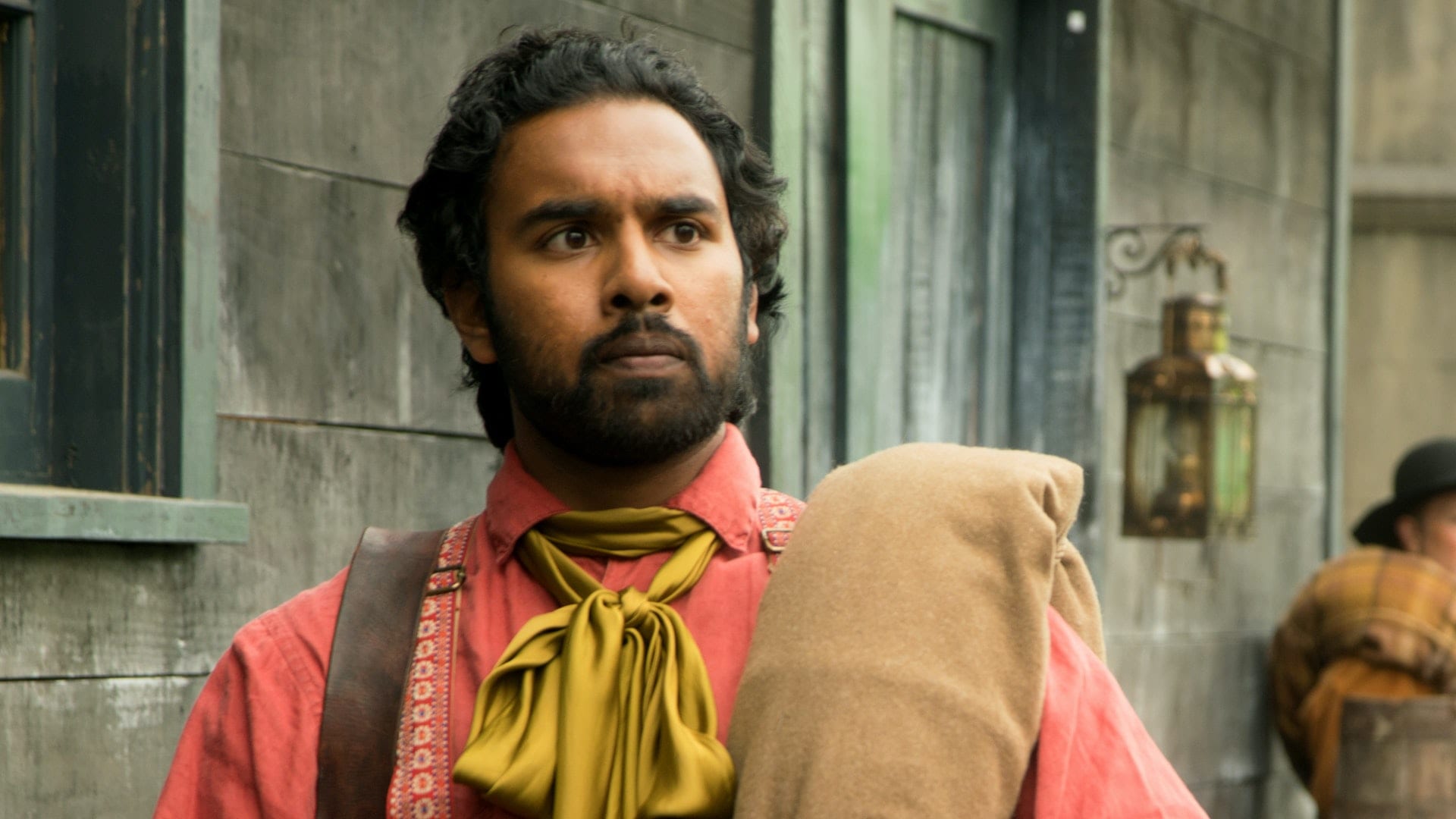 Finally, I still have some trouble following the story and the timelines in The Luminaries. This is another aspect of the show I was hoping would improve, and I still do. But “The Place You Return,” sadly, fumbles around with its characters and settings just as much as “Fingerprint.” Part of this is messy writing and confusing transitions, but I also think it’s related to my previous points. It’s harder to closely follow something I’m not totally invested in, and this show only has one character I like so far. I think they should have focused on fewer side characters, dropped the nonlinear story model, and used “Fingerprint” to get the audience to like and care about Emery and Anna. I assume they’re setting them up to be a couple in the end, but I don’t really care if they find each other again or not. I’ve spent two hours watching them being used by master manipulators, and now they’re not even in the same town anymore. Do you know what the worst part is? I don’t care enough about them and their relationship to be safe about that.

“The Place You Return” continues all of “Fingerprint’s” fumbles with narrative and characterization while having the audacity to bring in more characters. Eva Green is still good as Lydia, and I’m somewhat intrigued by her liaison with Francis. It is interesting to me that she’s willing to kill her husband when we haven’t seen anything he’s done wrong to her, at least not any worse than what she’s already doing to him. So far, I have to admit that I’m disappointed in The Luminaries. I expected more out of it for being a BBC production and casting Eva Green, if nothing else. I’ll continue watching until the season ends, and I hope things improve.

I really love your review of The Luminaries.