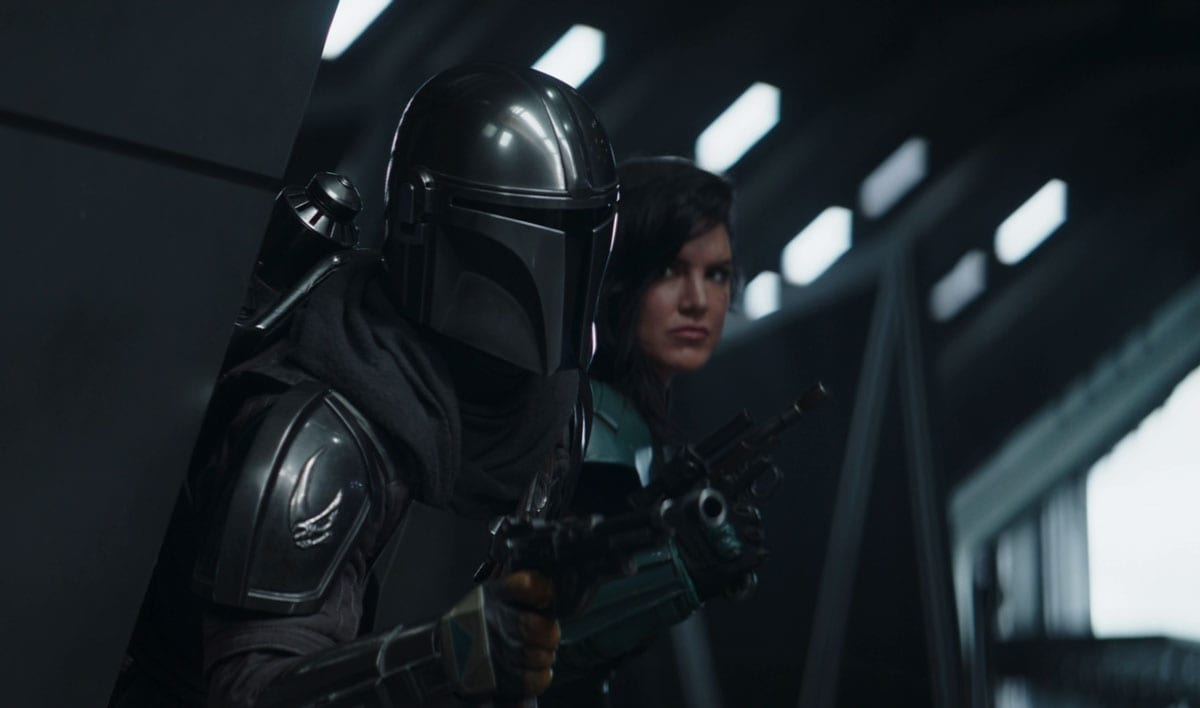 This week, Mando and the Child head back to Nevarro to get the ship repaired. Meanwhile, Cara Dune takes out some criminals and returns their stolen goods to their rightful owners. She’s now the town marshal, and they’ve established a school in the time since Mando left. They leave the baby with the class while they discuss business. Cara and Greef will have the Razor Crest repaired, and Mando agrees to help them knock out an Imperial military installation, finally freeing Nevarro from the Imperial remnants. However, once they get there, they discover evidence of scientific experiments performed using the Child’s blood. It’s a lab rather than a military base. Moff Gideon’s plans prove to be far more sinister than Mando and the others previously thought. This is also how they discover that Gideon is still alive. Mando rushes off to get the Child as the others hop in an Imperial ship. However, unbeknownst to all, one of the repairmen installed a tracker on the Razor Crest on Gideon’s orders. 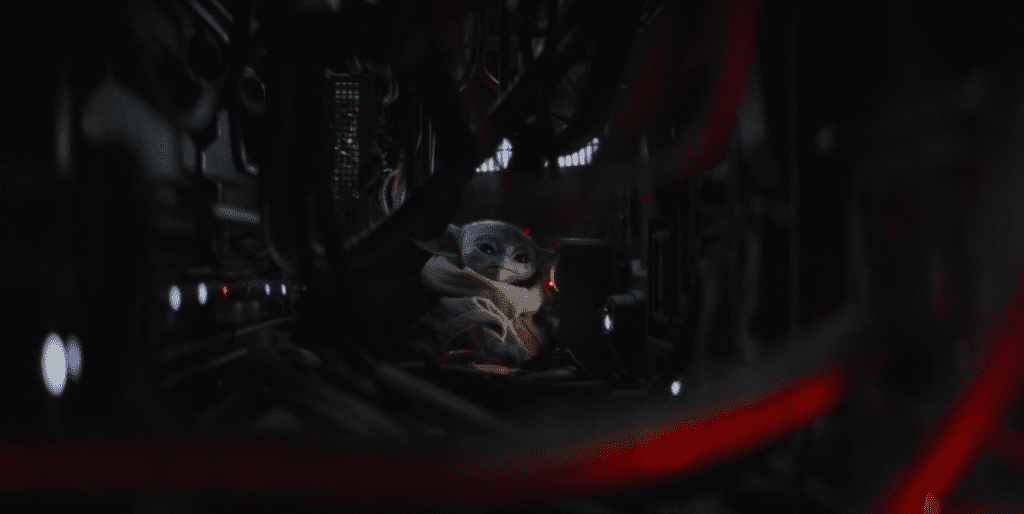 “The Siege” is directed by Carl Weathers and, fittingly, features the return of his character, Greef Karga, and former-shock-trooper-turned-marshal Cara Dune (Gina Carano). I kind of figured we’d see them again before too long, but I was surprised to see Mythrol (Horatio Sanz), the blue guy Mando encased in carbonite in the series pilot, alive and well. I’m not sure if they actually mentioned it last year, but “The Siege” clarifies that he was brought in specifically for Karga and not some random client. Now that he’s back in hand, Mythrol is working off 300 years of debt to Karga, much of which is removed in exchange for performing dangerous tasks in this episode. I wonder if they’ll give this character a proper name (Mythrol is actually his species). They could make him a recurring character since he lives on Nevarro now. The Child gets several good moments again in “The Siege,” starting with the first scene in the episode. They know many people come back every week to see more of the baby. Somewhat surprisingly, they’ve been smart about how to use him without relying on him too much. My favorite moment with the Child in “The Siege” comes early on when he and Mando eat together. It’s a small thing, but I found it really sweet how he was intently watching Mando adjust his helmet to eat, trying to peer beneath the mask. I also found it really funny when he took the cookies from his classmate and hilarious, if a little gross too when he eventually spat them back up. 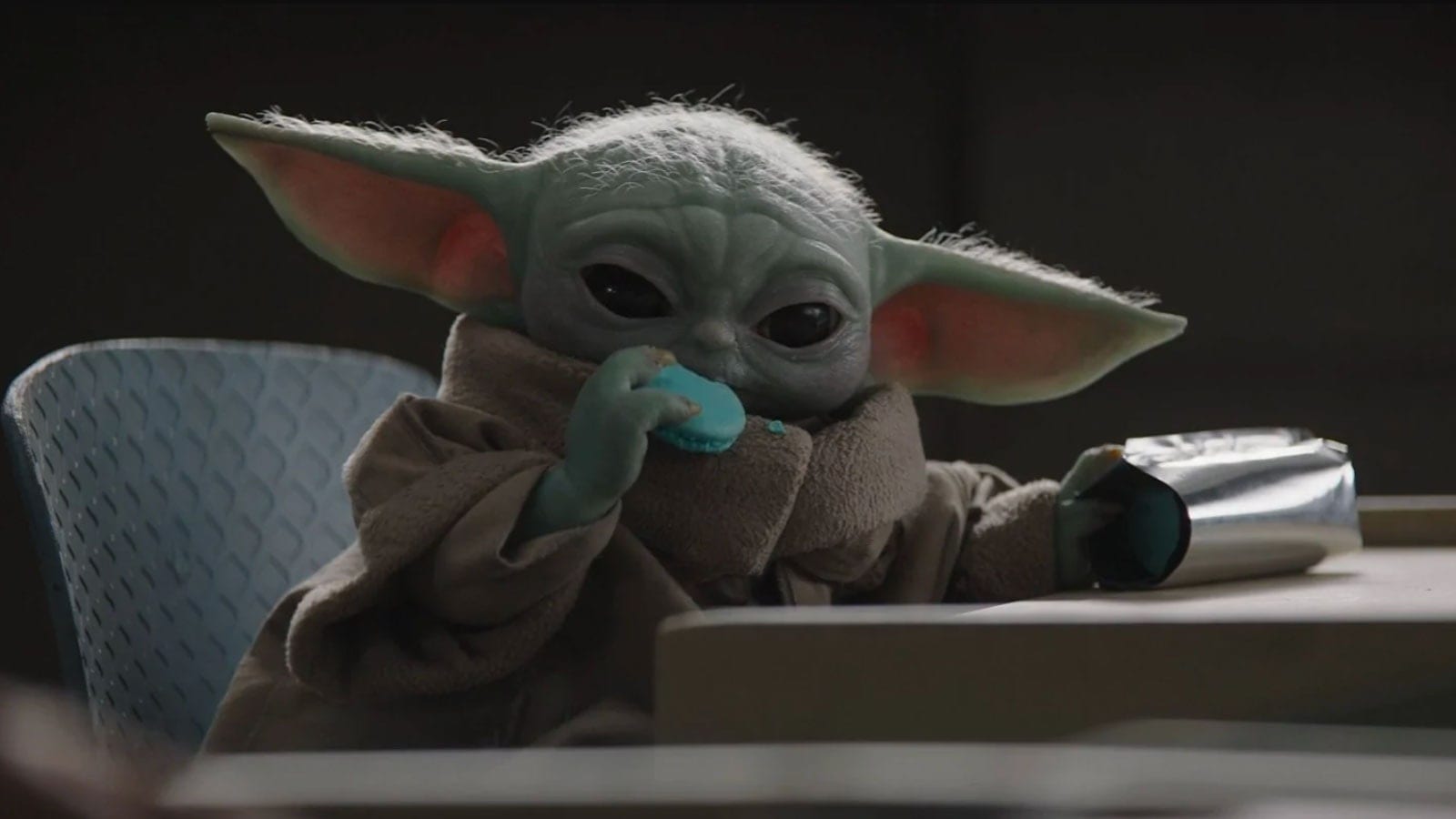 The main attraction in “The Siege” is the “military installation” Mando agrees to infiltrate with his old friends. They quickly find mutated lifeforms in tanks that resemble the failed Snoke/Palpatine clones in The Rise of Skywalker. They also view a recent hologram that confirms that Moff Gideon is alive and wanted the Child for blood samples because of his high midichlorian count. I wish we got a better look at the “test subjects” in the tubes, and I really hope that they’re not meant to be the failed experiments shown in the latest movie. It seems like they’ve been careful so far not to confirm or deny the sequels, which is probably for the best. Many people (myself included, in all honesty) would like to see the sequels erased from canon or turned into a sort of alternate universe that could be averted or ignored altogether. However, I don’t think that’s very likely, and it would upset almost as many people as it would please. I have wondered if The Mandalorian would be used as something of a bridge between the original trilogy and the sequels, especially since that’s when it takes place. I just don’t want to see anything from the Disney era films reinforced or explored. I’m not interested in how The First Order came to be; if they wanted us to care about that, they should have made them more charismatic, threatening, and interesting. If they go that route, it would also necessitate some explanation of how Ahsoka died. She’s a disembodied voice Rey hears in The Rise of Skywalker, something akin to a Force Ghost. I’m really, really not excited to see Ahsoka die. Even if they wanted to kill her off, it should have been in season 2 of Rebels when she faced her former master. I didn’t want to see her die then either, but that would have made the most sense for her character as a means to end her story. I would have a hard time accepting Moff Gideon or anyone we’ve seen on The Mandalorian (at least thus far) as an equal to Ahsoka, let alone capable of killing her in combat. We’ll have to wait and see, but I just hope these clues from the episode lead to something else entirely or serve as some kind of misdirection. It’s likely Ahsoka’s story will be picked up next week since Mando is headed toward her now, and the episode is apparently titled “The Jedi.” Hopefully, they quickly either explain why she is considered a Jedi again, or, as I suspect, that Bo-Katan called Ahsoka one because she doesn’t understand the situation’s nuance. That episode is directed by Dave Filoni, and I’m sure he wouldn’t ruin his greatest creation now, so I look forward to seeing how they deal with that. 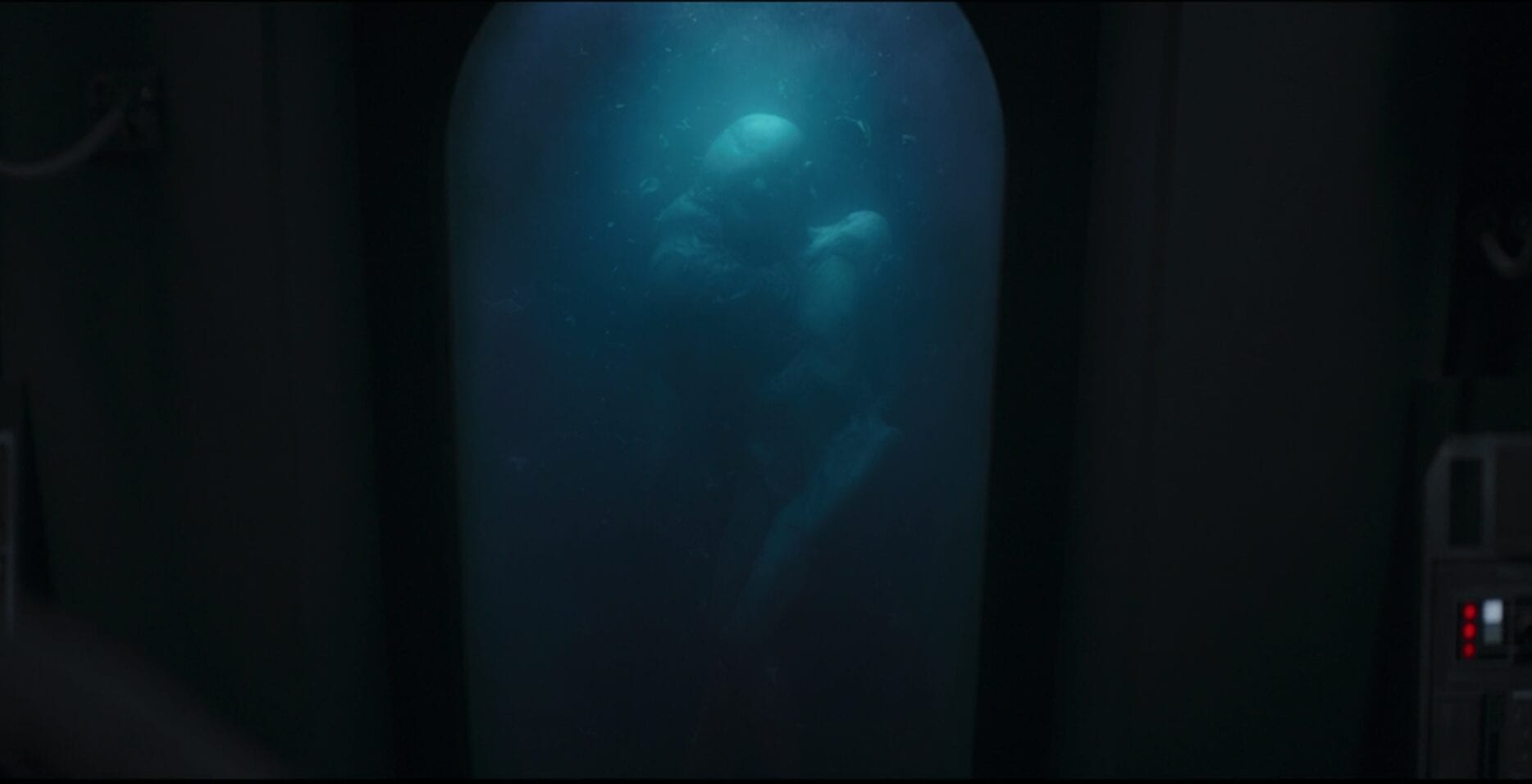 In the end, we also see Moff Gideon standing in front of huge, menacing suits of armor as he learns that Mando is now being tracked, just like he wanted. This was very ominous, and I’m sure the suits will prove to be quite a threat later on, possibly near the end of the season. This is part of what worries me with Ahsoka; if Mando is taking the baby to her, and Gideon follows Mando, they may try to use a confrontation with him to explain how she died before the sequels. I also expect this to tie in with the Darksaber, the lightsaber Gideon has, and which Bo-Katan is after. The show’s main characters were also quite enjoyable this week. Mando is clearly becoming more open and friendlier; his interactions with his friends show a deeper trust and enjoyment of their company. I also really like what they did with Cara Dune in this episode. She’s now the marshal, but they just let her actions speak for themselves, rather than going on about how Nevarro has a female sheriff or some other annoying crap. I enjoyed her interactions with the little rodent she saved at the beginning, who is now probably her very own “Baby Yoda.” The scene near the end where she talks to the Republic pilot we’ve seen a few times was sweet, too. The line about how she’s lost everyone is a well-worn idea, but that’s because it’s effective. If I recall right, last season, they said she was from Alderaan but left it at that. 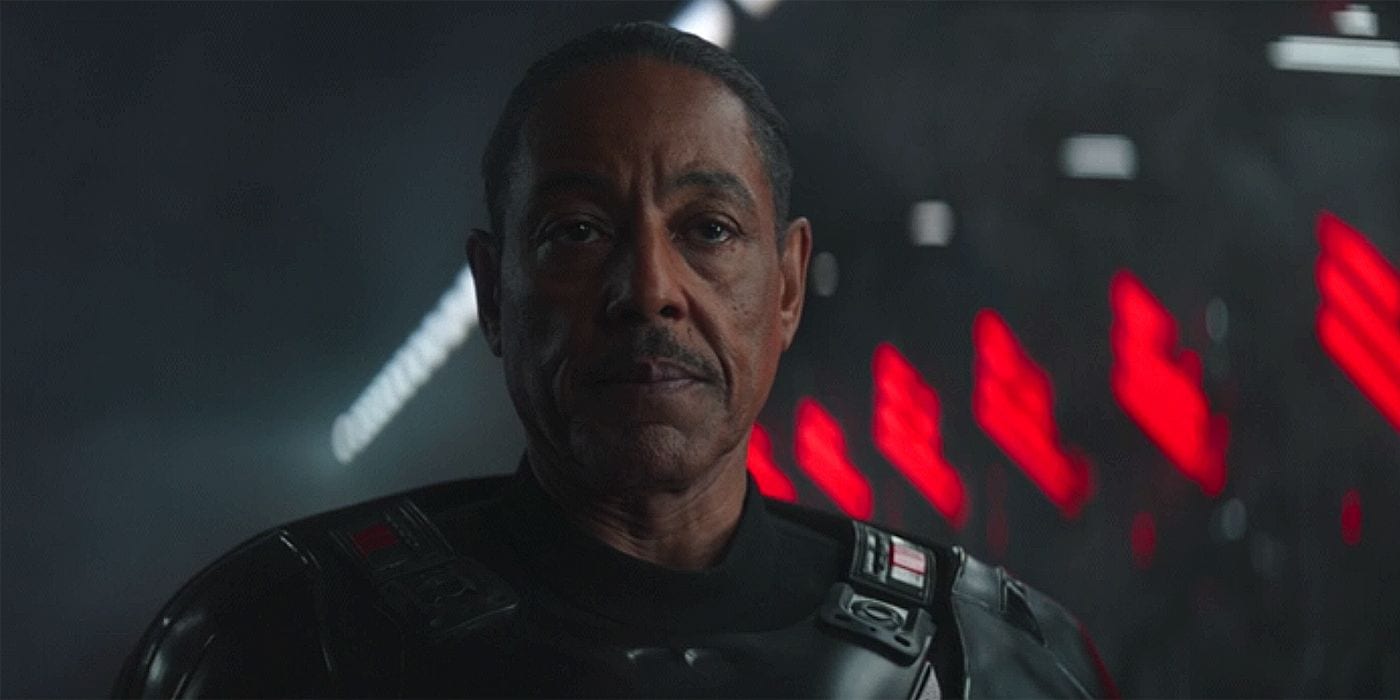 Overall, “The Siege” is pretty good. It looks and sounds great, it raises the stakes considerably, and it progresses every major character to some degree. I think “The Marshal” may still be my favorite episode of this season thus far, but “The Siege” is exciting and a far sight better than “The Heiress,” and that works for me.

The Mandalorian Season 2, Episode 4 "The Siege"

Overall, "The Siege" is pretty good. It looks and sounds great, it raises the stakes considerably, and it progresses every major character to some degree. I think "The Marshal" may still be my favorite episode of this season thus far, but "The Siege" is exciting and a far sight better than "The Heiress," and that works for me.