"Not all Mandalorians are bounty hunters. Some of us serve a higher purpose." 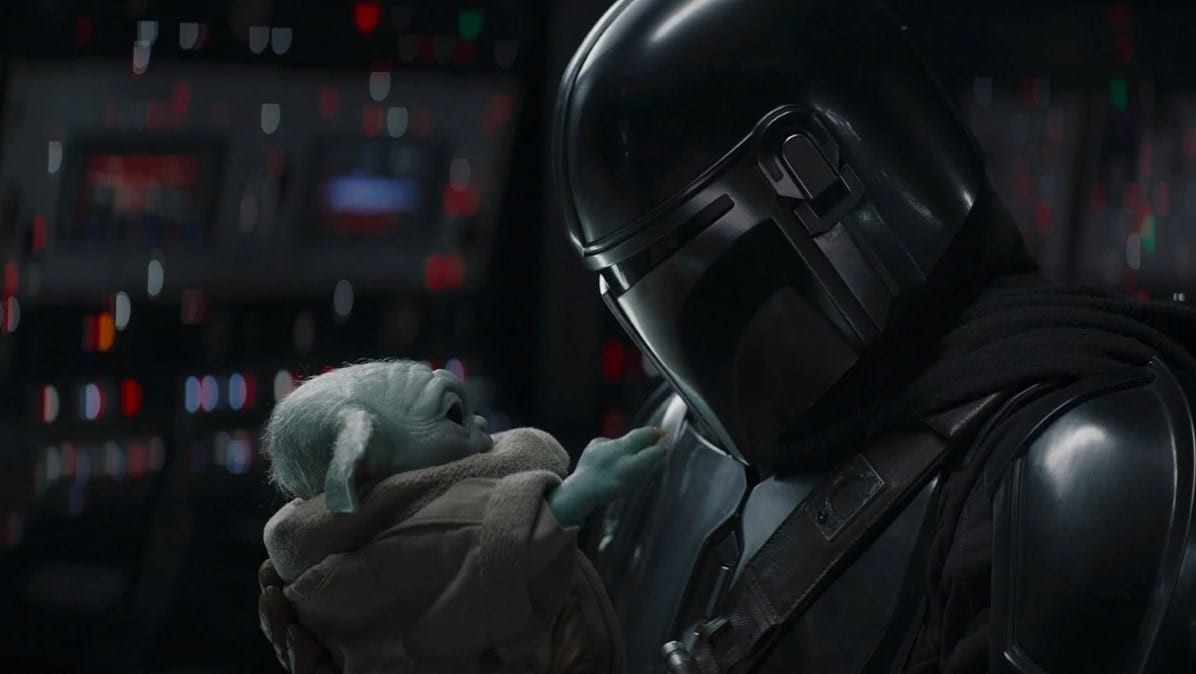 This week on The Mandalorian, Mando rounds up a crew to save Grogu from Moff Gideon. He and Cara take out the pilots of an Imperial landing craft, taking Dr. Pershing captive for information. Then Mando and Boba seek out Bo-Katan and her followers for help. When she initially scoffs at the notion that they can find and defeat Moff Gideon, Boba Fett remarks that they don’t need her help anyway. This leads to another dispute over who really is a Mandalorian, who should wear beskar, and if retaking Mandalore is even a worthy cause. However, they ultimately agree to help on the condition that Bo-Katan gets the Darksaber, and they take the Imperial ship to retake Mandalore. This motley crew boards the landing craft, deceptively chased by Slave-1 so they can make a distress call for an emergency landing. Moff Gideon knows something is amiss, though, probably because of the transmission Mando sent him at the end of the last episode. He orders that TIE fighters be sent out to fight off Fett’s ship rather than allowing the landing. 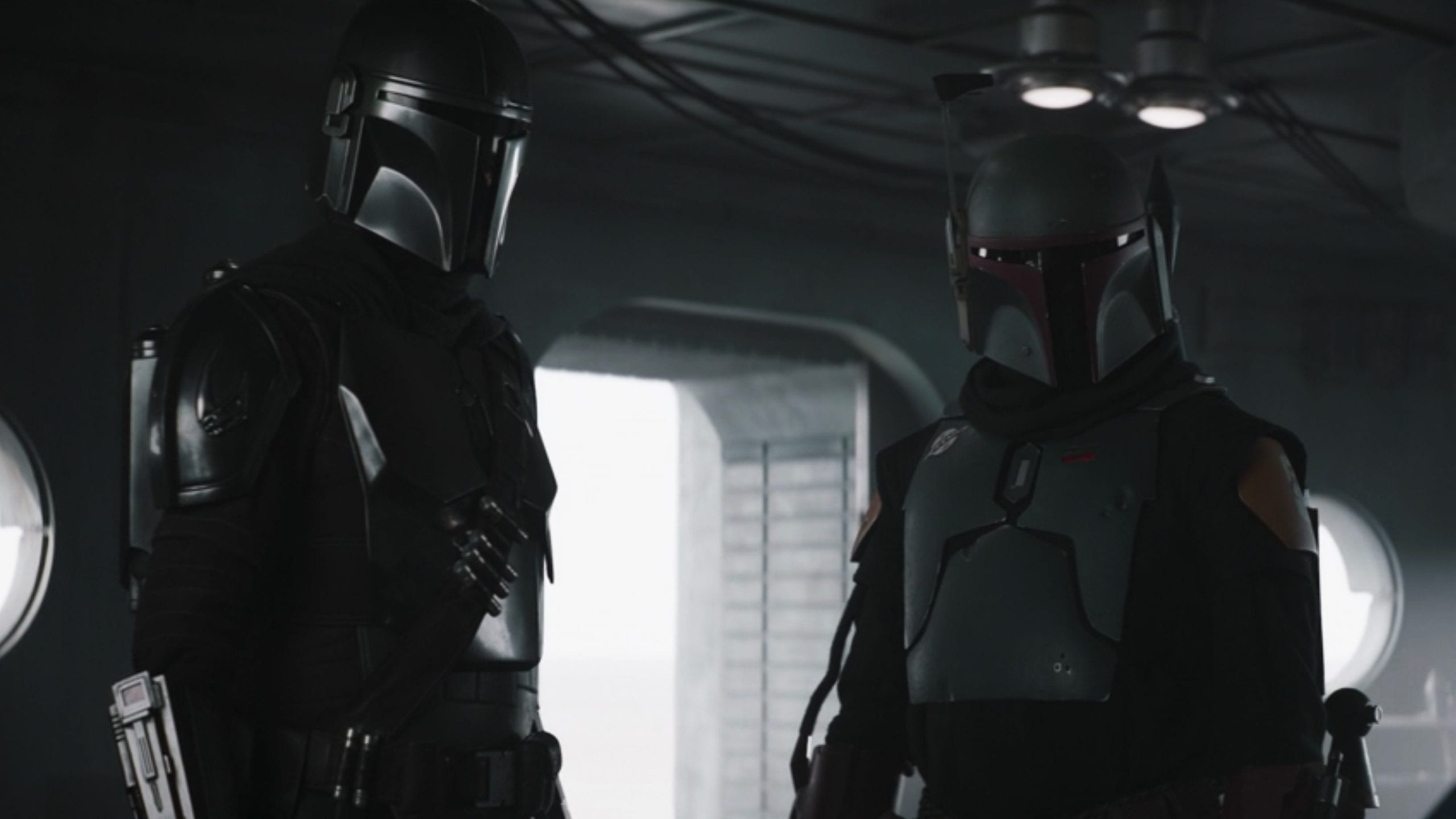 Nonetheless, Bo-Katan pilots the craft into the door Gideon was deploying the fighters from. The group plows through the Stormtroopers and the ship’s crew with ease. However, the Darktroopers prove to be a formidable obstacle, one of which easily stands up to Mando’s gadgets and tricks. He opens the outer doors, launching what he thinks are the rest of them into the vacuum of space. He finds Grogu, but Moff Gideon is there waiting with him, the Darksaber ignited. Mando actually manages to defeat and disarm him, leading him to the others. However, this presents an issue in the form of the Darksaber; Mando has taken it in combat, making it rightfully his. To reclaim the blade and her ancestral home, Bo-Katan would have to beat him in ritual combat and take it off him. However, more pressing matters present themselves in the form of more Darktroopers trying to batter the door down. In the chaos, Gideon shoots Bo-Katan several times and turns his aim on Grogu. Mando dives in front of the child, shielding him with his armor. An X-Wing appears and refuses requests to identify. The passenger makes quick work of the Darktroopers, and Grogu seems enthralled by the cloaked figure on the security camera screens. It turns out to be none other than Luke Skywalker, with R2D2 in tow. After he confirms that he is a Jedi and beckons Grogu to go with him, Mando shows Grogu his face, and they exchange a bittersweet farewell. 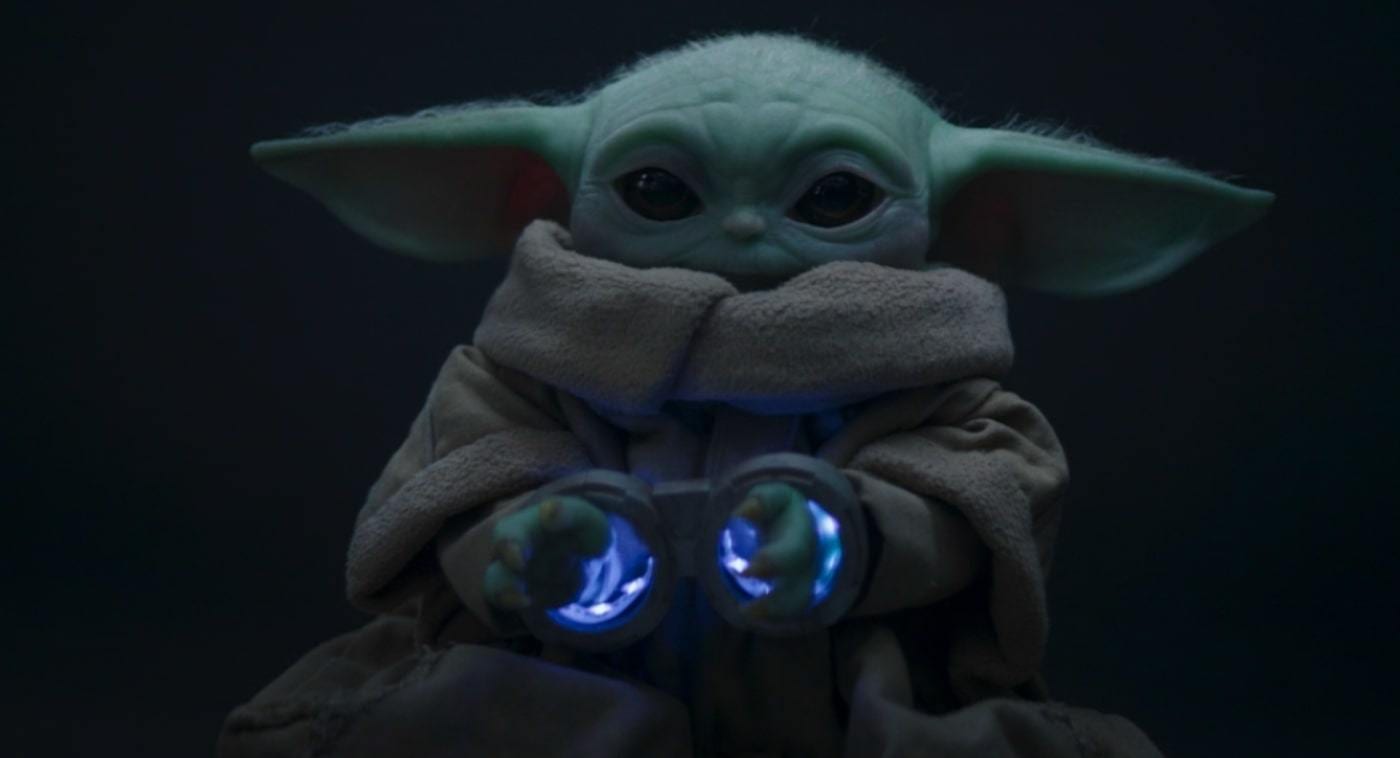 “The Rescue” is a rare episode that actually left me speechless when it ended. I’ve heard theories that Luke would be the Jedi to train Grogu, but I kind of assumed it wouldn’t happen. Mark Hamill is a lot older now (obviously), and he would be the most obvious choice. More importantly, this would mean Grogu gets slain by Kylo Ren in the Last Jedi flashbacks. However, I think this was the right choice, and the de-aging effects on Luke are much better than the copy-pasted faces in Rogue One. It still doesn’t look as good as it has in the Marvel movies. This is a TV series, though, so I’m willing to allow for slightly lower production values in a show that otherwise has impressive effects and visuals.

I’ve actually (somewhat surprisingly) already seen some backlash to this reveal in “The Rescue.” I’m not sure why; there aren’t that many Jedi around as options to train him, and most of them wouldn’t make as much sense as Luke. Ahsoka already said why she wouldn’t train Grogu. It was a pretty convincing, understandable reason if you saw her arc in The Clone Wars. She also isn’t a Jedi anymore anyway, a detail they haven’t addressed with her in live-action yet. Ezra Bridger would be a contender, but since Ahsoka is looking for Thrawn, I assume Ezra is still missing, and she thinks Thrawn can lead her to him. As a Padawan who didn’t complete his training due to Kanan Jarrus’ untimely death, Ezra also wouldn’t make the best teacher. This would also be a repeat of the dynamic he had with Kanan if they had gone this route. However, he could teach Grogu a little about what it’s like being tempted by the Dark Side. For the most part, that only leaves Cal Kestis from the recent Star Wars games and Quinlan Vos. He was a background character from The Phantom Menace who starred in an episode of The Clone Wars and later the novel Dark Disciple along with Asajj Ventress. I really, really would have been surprised if it was either of these characters. Luke has the most emotional impact for the audience (and only Ahsoka could even come close), he is the one leading the new Jedi, and I think it makes perfect sense for him to hear Grogu’s call. This is also an excellent opportunity/reason for things to actually not go badly with the new Jedi Order. I’m starting to think they really might retcon the sequels or use the World Between Worlds to open alternate realities. The way Luke carries himself in these scenes, and the mysterious but hopeful music, really make this work more than anything. And I was glad to see Mark Hamill credited for the performance, as I’m embarrassed to say I couldn’t tell if it was him or if they cheated a little like in Rogue One. Speaking of which, the scene where Luke tears through the Darktroopers reminded me of one of the final scenes in Rogue One, in which Vader similarly cut down a room full of Rebels. That was one of the only moments I enjoyed in that film, but it’s even better in “The Rescue” because we can root for the person wielding the lightsaber.

That being said, there was quite a bit going on in “The Rescue” outside of Luke’s reveal. Following along with what we learned in The Clone Wars and Rebels, in defeating Moff Gideon, Mando has unwittingly taken possession of the Darksaber. This puts both him and Bo-Katan in an uncomfortable situation. To rightfully retake it and win the Mandalorian people’s favor, she now has to best him in combat. I genuinely look forward to seeing how they solve this dilemma. This may even have a lot to do with the last time Bo-Katan wielded the saber; Sabine Wren gave it to her, rather than Bo-Katan winning it in combat. Maybe she partially thinks this error was why Mandalore fell (again). Maybe it was. A lot actually happens with the Mandalorians in “The Rescue.” Bo-Katan and Boba Fett, in particular, debate several issues that I can imagine will come up again in later seasons. I certainly hope they do because the different types of Mandalorians and their beliefs are exciting. This also mirrors the scene in the landing craft; the Imperial remnants don’t all agree or get along, and neither do the Mandalorians. As an aside, I’ve noticed something this season with regards to the show’s female characters. There are several in an overall pretty small cast, they’re all very different from one another, and I kind of love it. The sequels gave us one soulless plank of wood who could do no wrong after another. All-in-all, they didn’t have very many female characters despite all the talk of strong female heroines. The Mandalorian doesn’t preach about gender or go out of its way to say women can be strong too, but this more subtle approach has given us characters like Cara Dune, Fennec Shand (who will appear voiced by Ming-Na Wen in The Bad Batch), consistent, believable live-action versions of previously animated characters like Ahsoka and Bo-Katan and more. It’s cool how this show can introduce more nuanced, interesting, and believable female side characters than the sequels could, especially since it was arguably the only reason they existed (aside from money). 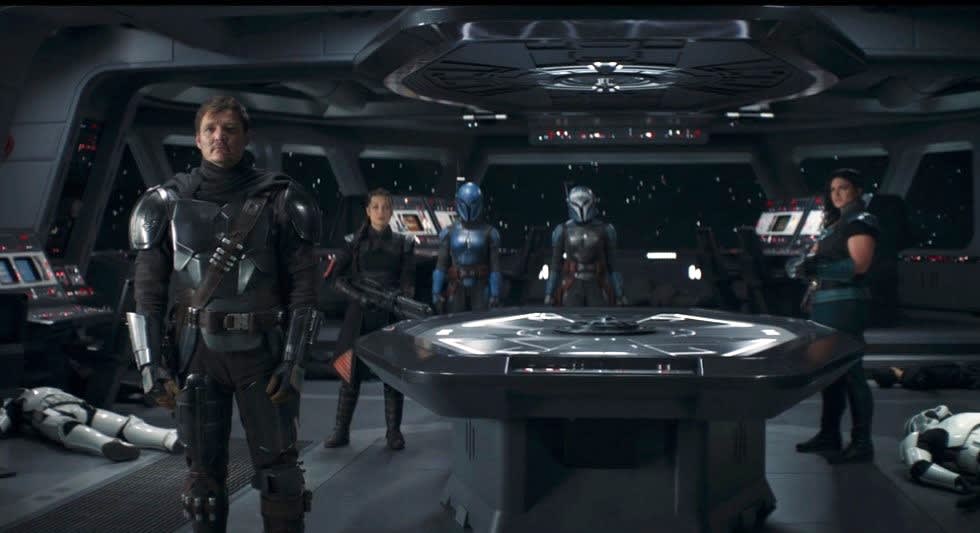 I liked how Moff Gideon offered Grogu in exchange for peace and the Darksaber, and it ended up being a trap. I’ve been suspecting they’d try to humanize him at some point, showing some complex motive for his nefarious deeds. But merely letting Din take the baby because of the bond they share? That would be a little too much, and I’m glad it was just more trickery. Finally, I want to talk about the post-credits scene in “The Rescue.” Not much happens; Boba Fett and Fennec Shand enter Jabba’s Palace, and he kills Bib Fortuna, who has apparently succeeded Jabba. Boba sits on Jabba’s throne with Fennec at his side. A title card announces The Book of Boba Fett, a TV series (I assume) which will premiere next December. I’m very surprised to hear of another Star Wars show that wasn’t mentioned at Disney’s Investor Day. However, I can kind of see why they’d want to keep this as a big end-of-season surprise. As for the announcement itself, I’m fine with it. I’m happy people are actually enjoying and excited about Star Wars again. While Fett isn’t my favorite character by any means, this show has actually increased my appreciation of him, and I will check out the series. Although it’s also just because I love Temeura Morrison and especially Ming-Na Wen.

Overall, “The Rescue” is an excellent episode and a heart-pounding finale to what has been a phenomenal season of TV. I have mixed feelings about Grogu leaving Din to get trained, although they gave him to the one character I will accept in this role. This episode was a real tear-jerker, especially when Din showed Grogu his face and promised they’d see one another again. I look forward to more of this show, but in the meantime, I’ll be ugly crying with my Grogu doll.

The Mandalorian Season 2 Episode 8, "The Rescue"

Overall, “The Rescue” is an excellent episode and a heart-pounding finale to what has been a phenomenal season of TV.