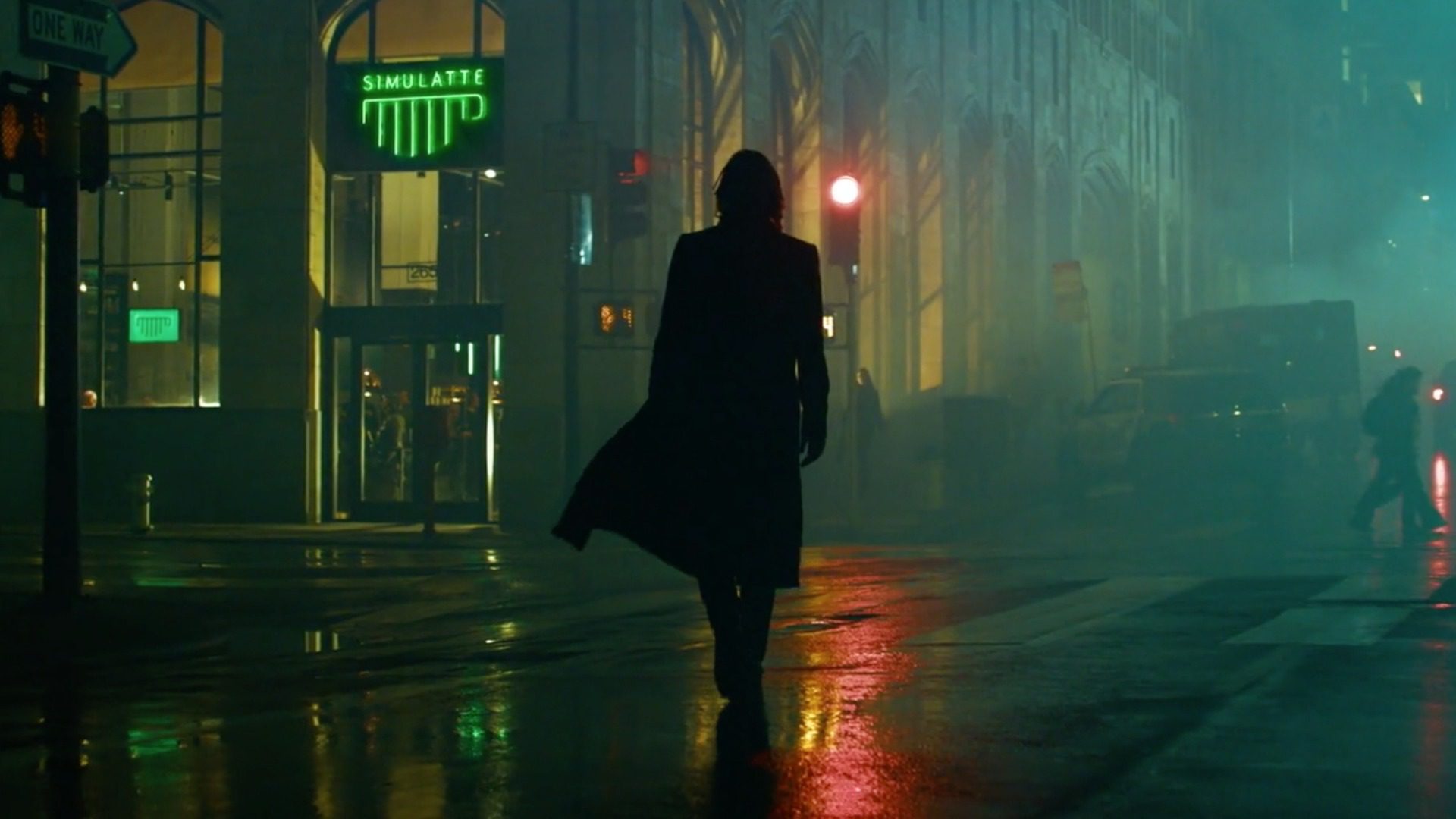 For a movie that has no business existing, The Matrix Resurrections draws a lot of attention to how it has no business existing. More a meta-commentary on the franchise, its own ineptness, and the entertainment industry in general than an actual narrative, The Matrix Resurrections borders on unwatchable, so satisfied by its own smarmy critique of literally everything having to do with The Matrix – not the least of which its fans, because nary a property exists in modern Hollywood that doesn’t outright despise its own supporters —that it doesn’t even bother trying to be entertaining. Healthy doses of painfully unfunny humor and grating new characters (not that the old ones fare a whole lot better) dump water on a drowning film and help suffocate a few genuinely good ideas.

As the events of The Matrix replay themselves, Neo – or Thomas Anderson, the name to which he has reverted – navigates life in the “real world,” where the original film is a fiction he created and which forms the basis for an entertainment phenomenon. But when he sees a woman in a crowded coffee shop who looks mysteriously familiar, Mr. Anderson discovers that his fiction and reality may not be what they seem.

The first act of The Matrix Resurrections is what we’ve come to expect from movies like this: wall-to-wall references to The Matrix and its first two sequels, down to recreated scenes and mimicked shots, new characters standing in for older ones, and a bunch of assurances that the movie knows what it’s doing. That may be, but just because someone knows they’re driving into a wall doesn’t mean their car isn’t about to crash. None of these ‘member berries – and that’s what they are, no matter how many smug winks at the camera accompany them – work, partly because of the sheer glut of them so early on, and partly because the recreations are so poor. Elements that looked like the coolest thing in the world when we saw them over 20 years ago have lost all their power, and not because of the time gap; the filmmaking techniques aren’t as good this time. Action scenes that were full of energy then are lifeless now, shot at bad angles that obscure the good stuff. All we’re left with are reminders of what was once special.

That goes for the special effects and production design too. The Matrix Resurrections has plenty of visual callbacks, including many of the same locations and artifacts, but they’re pale imitations of their progenitors. For example, the difference between reality and the Matrix was once startling. The Matrix was bright and shiny-metallic, reflecting the influence of its machine overlords and their utopian mask for the prison they’d created. The only time the palate shifted to drab, brownish tones was when the resistance fighters were present, slinking around in dark corners or dank buildings, indicating that these people saw the Matrix for what it really was. The real world, conversely, was dingy and dirty, a horror show the red-pilled humans awoke to, smacking them in the face with reality. The Matrix Resurrections tries to recreate that, and while the Matrix looks fine, the real world is too glossy, and it feels as artificial as the Matrix, never capturing the lived-in, squalid quality of the first three. The same is true of the machines, which are now so pristine-looking as to appear as drawings rather than physical beings. Perhaps the temptation to show off the advancements in CGI was too great, but the result is all sizzle and no steak. 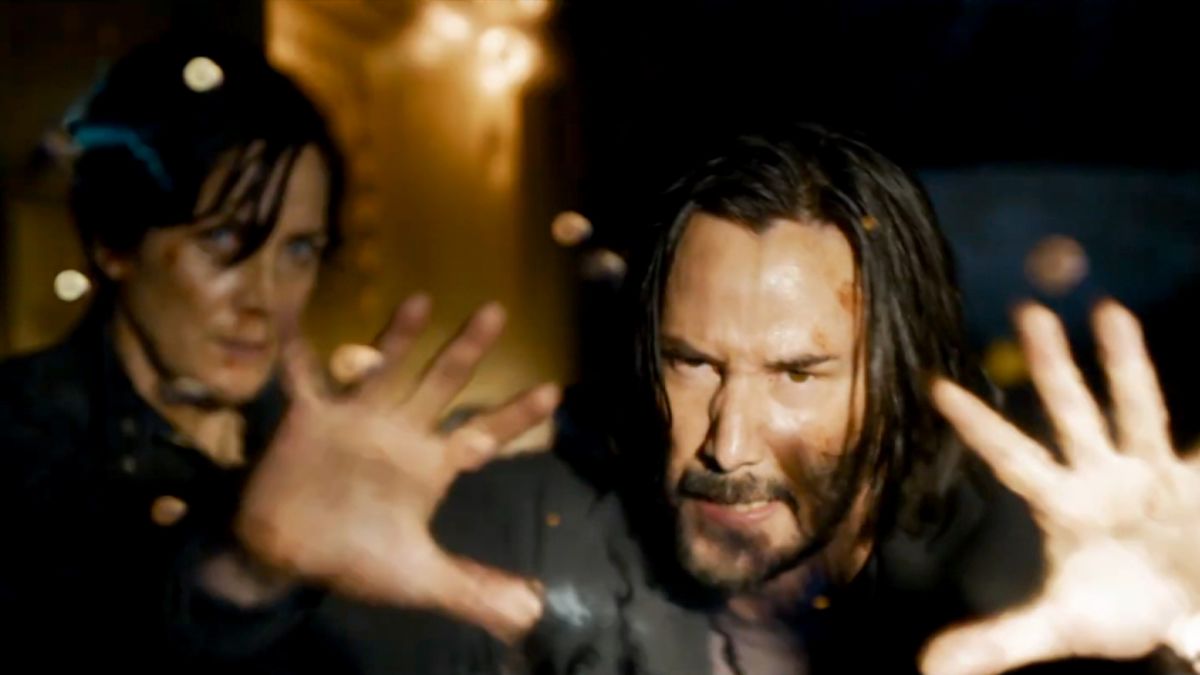 That same dynamic is true for the characters (though I hesitate to use the word “dynamic” in relation to them). Yahya Abdul-Mateen II and Jessica Henwick are the new Morpheus and Trinity – yes, there’s a “new Trinity” in a movie that has the actual Trinity, for some reason – and they have outsized personalities, constantly making jokes and delivering too-cool-for-school one-liners that feel as welcome in this world as they would in Hamlet. Remember how terrified the characters in the original were when they encountered an Agent, knowing a confrontation would end in their death? Not these unflappable quipsters; they dismiss impending doom with the same energy as that “Do you talk or do I talk?” scene in The Force Awakens. They don’t feel like actual human beings for a moment, but they really want us to like them. Neil Patrick Harris acts as if his only direction was, “Act like Neil Patrick Harris, only more Neil Patrick Harris-y, and with a dash more Neil Patrick Harris-ness.” I love the guy, but his smarminess is turned up so high that this single attribute constitutes his entire character. Jada Pinkett-Smith returns as Niobe, a nothing character the movie pretends was important outside of that video game, and she’s bland in a rote role, letting her old age makeup do the acting for her. No one else much matters, except for the big two (which should have been the big three, but they decided to cast the guy who played Doctor Manhattan on the awful Watchmen show instead of bringing back a legend like Laurence Fishburne).

And those two are fine, I guess. To his great credit, Keanu Reeves is engaged and doing his damndest to make something out of this ridiculous movie. The Matrix Resurrections gives him some embarrassing nonsense to suffer through – he has to sit in a bathtub with a rubber ducky on his head, which I’m sure is supposed to symbolize something or other – but Reeves sticks it out, making Neo feel like Neo as much as he can in a movie that goes out of its way to diminish the character. It doesn’t reach Luke Skywalker or Disney+ Marvel levels of denigration, but let’s say Neo isn’t as uniquely important as you’d expect a character dubbed “the One” to be. Carrie-Anne Moss, on the other hand, looks bored. She was never a live wire in these films, but that used to be because it was part of Trinity’s character. In The Matrix Resurrections, it looks like she’s not engaged or interested, and it’s hard to blame her. A lot of significance is cast on Trinity, but she’s barely in the movie, showing up on occasion to be the object of Neo’s affections until the finale. And her dialogue is horrendous, making her come off as a caricature of herself. You’re much better off allowing yourself to remember Neo and Trinity as they once were than shaking your head at what they’ve become. 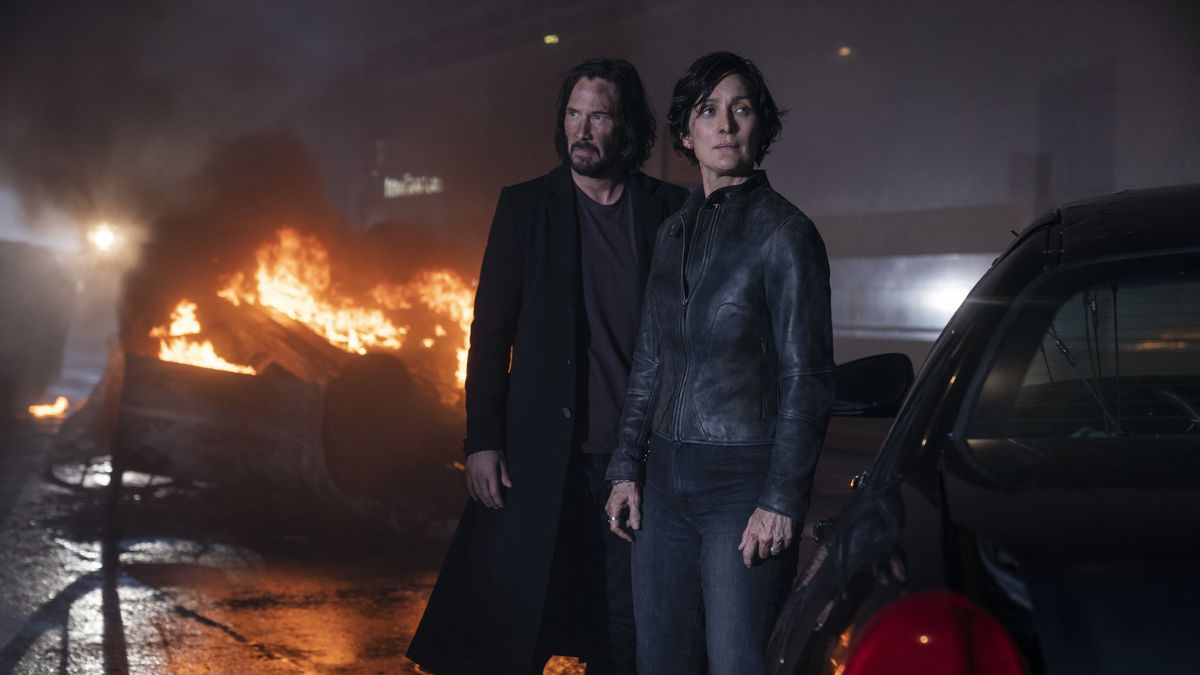 But it didn’t have to be this way. Even getting past the unnecessity of this film in general (I’m someone who believes The Matrix should have been one movie), The Matrix Resurrections has some good ideas swimming in the sea of idiocy that is the finished product. There are explanations about the status quo following The Matrix Revolutions or upgrades to the Agents’ capabilities that are fascinating concepts. A better film could have explored these in exciting and thought-provoking ways, making a case for revisiting this world after such a long hiatus. But, as with its incessant and unctuous meta-commentary (at one point, a character points out that another character made a stupid decision so that the plot could continue; I wish I were kidding), The Matrix Resurrections seems to think that merely introducing an idea is enough to be profound and relevant. It isn’t, and neither is this catastrophe of a movie.

The Matrix Resurrections is a boring, poorly filmed mess of a sequel that pats itself on the back for recognizing how bad it is, as though that’s some kind of virtue. Keanu Reeves tries his very best, but Carrie-Anne Moss is checked out, and the other actors flail about with annoying, weightless characters. The special effects and set designs are downgrades from the imaginative original, the action never excites, and some good ideas are paid momentary lip service before they’re abandoned. The only good thing about this movie is that I didn’t have to pay almost $20 to see it in a theater. (Thanks, HBO Max!)

The Matrix Resurrections is a boring, poorly filmed mess of a sequel that pats itself on the back for recognizing how bad it is, as though that’s some kind of virtue. Keanu Reeves tries his very best, but Carrie-Anne Moss is checked out, and the other actors flail about with annoying, weightless characters. The special effects and set designs are downgrades from the imaginative original, the action never excites, and some good ideas are paid momentary lip service before they’re abandoned.

Weird thing to bring up, but I find it ironic how Wachowski brothers invented concept of red pill/ blue pill… and they both took blue pill! And also, attempted to change meaning of red pill while making this movie..

The movie is so convoluted and ridiculous that I didn’t even catch what they were trying to do with the red pill. What’s weird is, they make fun of people across the political spectrum; there are actually lots of jokes at the expense of Hollywood leftists.