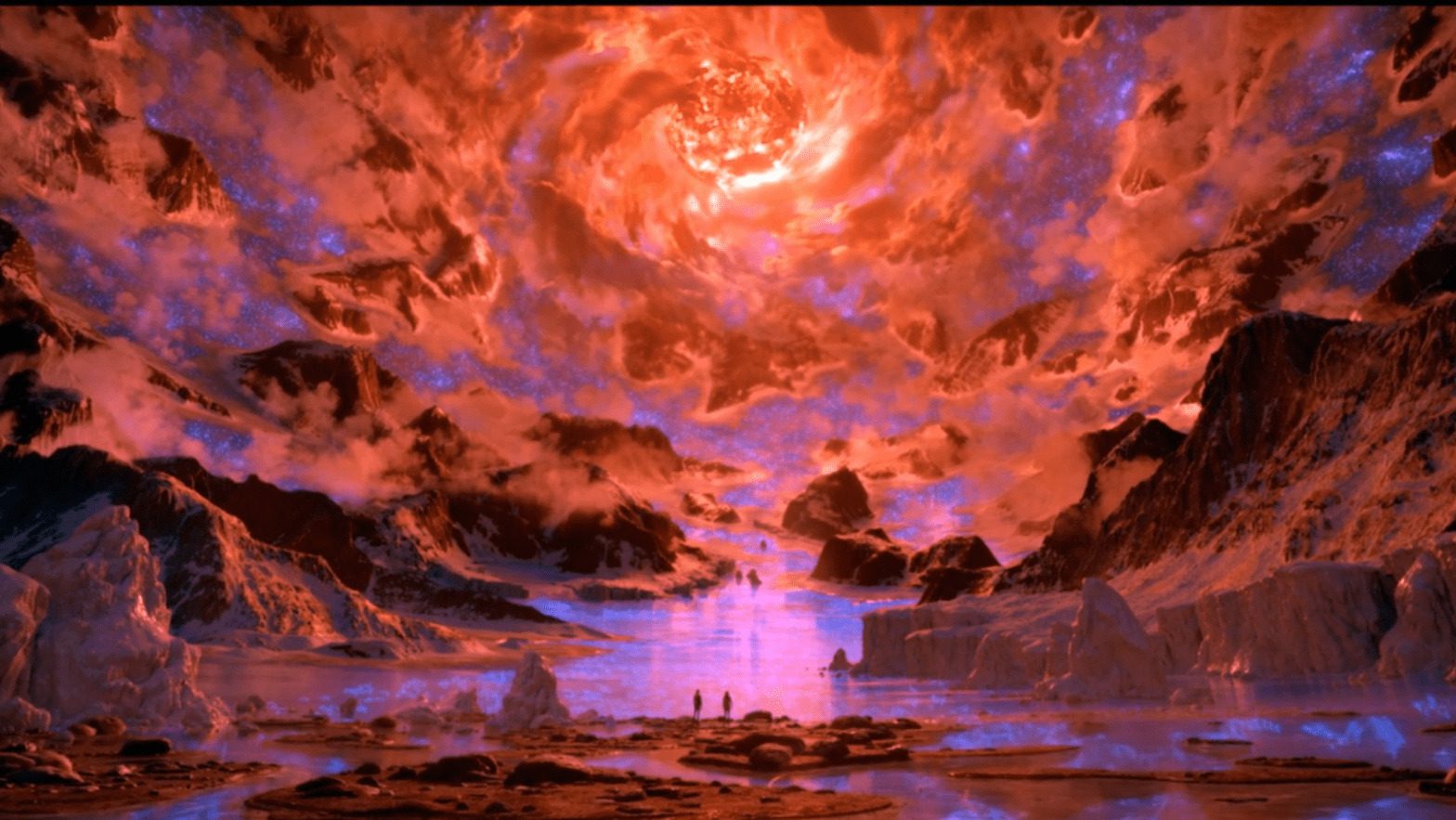 The Orville: New Horizons episode 10, “Future Unknown,” is out, marking the end of this incredible season. As the title suggests, the future of The Orville is shrouded in mystery. Will Disney and Hulu renew the show for a season 4? Will it rot on the shelf? Will the involvement of Disney corrupt this pure show if it is renewed? With this final question of Disney’s involvement, perhaps the best thing for The Orville is to stay gone. With Disney’s abysmal track record, there is little doubt that if they get involved heavily in the production, it will no longer be the show that fans have come to know and love.

Despite the incredible heights to which New Horizons has risen, “Future Unknown” is a tad disappointing. Regardless of its heavy reliance upon dialogue, the dialogue never truly says anything about the characters or the world in which they exist. Without a decent amount of action to make up for this lack of character work, “Future Unknown” slogs along, doing its best to resolve every plot thread it can within its runtime. This episode merely exists to wrap things up as best as possible in case there is no season 4. By rushing to the end, many characters are left unresolved or with unfulfilling resolutions with little narrative connective tissue to justify them. These quick resolutions also come with an absence of heart or emotion, for the most part. Without character work, action, or emotional resolution, “Future Unknown” feels more like a checklist of loose plot threads getting addressed than a cohesive story.

Perhaps more controversial, this episode also features far more comedy than the rest of New Horizons. Comedy in The Orville has been the primary cause of division amongst fans; some prefer early season 1, where comedy was its chief priority, while others prefer the show to emulate classic Star Trek more, focusing on the philosophical and ethical dilemmas that sci-fi allows a series to explore. While the majority of fans prefer a balance between these two extremes, there is enough division to warrant a discussion regarding the comedy. However, “Future Unknown” is flushed to the brim with cheap jokes and lacking quips. Without a cohesive plot or characters, there isn’t really much to drive the comedy home in many of its scenes, making it feel out of place and unnecessary. With the exception of a short arc from a returning character, this episode offers virtually nothing exceptional when compared to the rest of New Horizons.

“Future Unknown” sees Klyden and Bortus reuniting after their long separation in a Moclan ceremony of renewal. This ceremony inspires Isaac to research human marriages and eventually propose to Claire. In tandem with the wedding preparations, Lysella returns from season 1’s “Majority Rule,” begging for asylum aboard the Orville. She is a fish out of water, thrown into a new society that she cannot possibly understand, and must come to terms with a different morality. Lysella is forced to see why the Union does not interfere with underdeveloped species, finalizing her immersion into this new world. With her story resolved, Claire and Isaac are married. This episode leaves the door open for a potential season 4 but attempts to wrap up enough that fans might be satisfied if this were truly the end.

The majority of the scenes of “Future Unknown” are fine in isolation, but upon further inspection and the context of the rest of this season, they crumble. The exploration of Moclan culture within this series has always been fascinating, and that continues in this episode with the renewal ceremony. However, with how Klyden and Bortus left off their relationship prior, this sudden and complete resolution to their marital issues seems unearned and unwarranted. Their marriage appears to be better than ever, despite Klyden abandoning his family in a tirade of hate. He may have been forgiven, but it needs to be a gentle reintegration into the family, not a sudden and total reclamation of unity. Many other scenes within this episode followed the same example: they seem fine enough out of context, but with ultimately unearned and unwarranted character resolutions as the focus.

The one near entirely positive addition to this episode came in the form of Lysella’s story and arc, though it was such a small addition. This exploration of the Union’s version of the Prime Directive is fascinating, and it deserved its own episode to truly flesh out. As a short B plot in a finale, all the interesting questions asked and explored are left vapid and empty. A standalone episode surrounding Lysella’s arc could have easily become one of the best episodes of this season. As it stands, the almost tertiary approach to this complicated subject matter leaves all intellectual discussions entirely unfulfilled and a nigh-on pointless addition to the story. 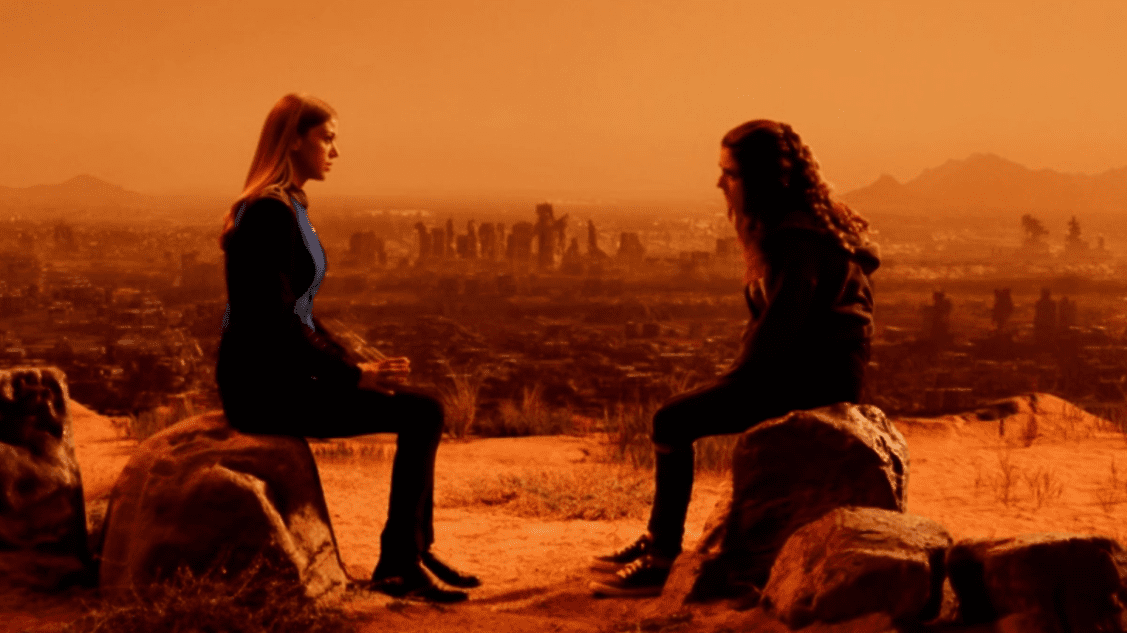 Despite the unfulfilling nature of Lysella’s B plot, it offers two of the best scenes in “Future Unknown.” The first comes in one of the most beautiful displays of modern CGI hitherto seen. Kelly takes Lysella to the simulator and shows her a hollowed-out asteroid populated by glowing stingrays warmed by a suspended core of energy. This asteroid is a collage of unspeakable beauty and endless colors that introduces Lysella to the beauty of the galaxy she’s just now discovering. The second scene of note in Lysella’s story also comes in the simulator. Kelly shows Lysella another world, once populated by humanoids, shining and beautiful, but left decimated and destroyed by the introduction of superior technology too early. Kelly’s line, “A species’ ethical evolution must run parallel to its technological evolution,” perfectly telegraphs why any law like the Prime Directive is so essential for a space-faring society. This entire conversation between Kelly and Lysella in the ruins of a long-dead world is fascinating and thought-provoking. Unfortunately, this great scene is cut short, ending up as such a small positive addition to “Future Unknown.”

The rest of the characters really don’t add anything to this episode. Gordon is just upset that Bortus took his thunder as best man. Though the scene where Gordon gets the egg sandwich that he sent into the future a few episodes ago was a good scene with an emotional payoff. Ed does absolutely nothing but get mocked a few times. He could have been taken out of the episode entirely and not left a discernible hole in his place. Bortus just services any joke the writers want to tell, offering nothing in terms of character or final evolution. LaMarr merely serves to give Isaac a piece of advice and get yelled at by Claire. Claire has a few emotional scenes but nothing truly to speak of. No one else even bears mentioning here. Despite appearing as a potential series finale, “Future Unknown” offers virtually nothing to its characters, resolving only the superficial nature of the loose story threads while not saying anything about the crew.

“Future Unknown” is still an enjoyable episode of television, but is entirely underwhelming when compared to the absolute sci-fi gold that The Orville has previously given its audience. It is easily the worst episode of New Horizons and a contender for the worst episode of the series. A season 4 is almost required at this point to give these characters truly emotional and fulfilling payoffs.

“Future Unknown” is still an enjoyable episode of television, but is entirely underwhelming wind compared to the absolute sci-fi gold that The Orville has previously given its audience.