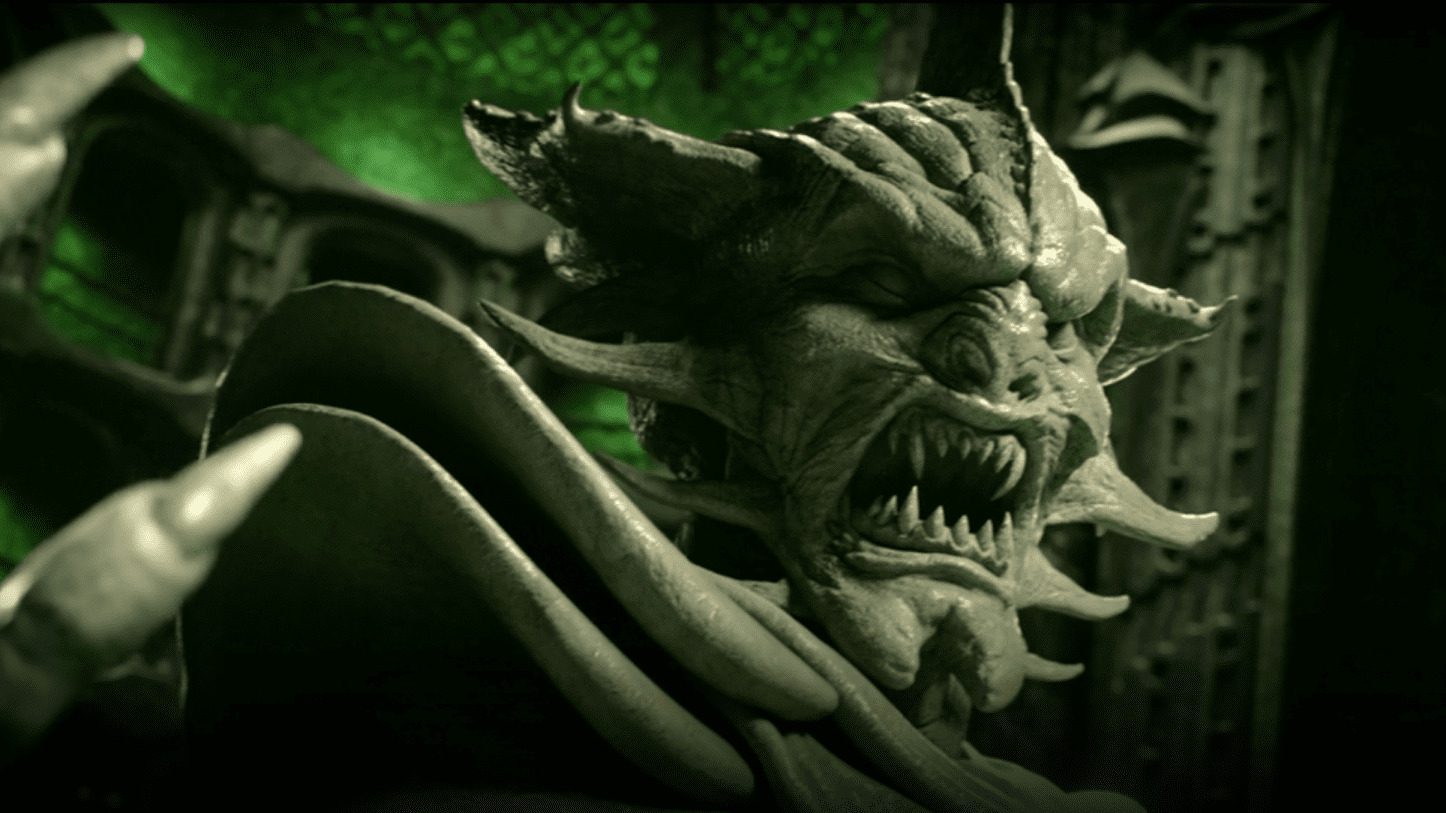 The fourth installment of The Orville: New Horizons, “Gently Falling Rain,” was released onto Hulu last night. Following the slight dip in quality from last week’s “Mortality Paradox,” this week’s episode was a welcome return to form. “Gently Falling Rain” is a stellar episode of both The Orville and science fiction as a whole, bringing political intrigue, tension, betrayal, and a positive outlook on fatherhood into this universe. The action is great, the interpersonal drama and relationships are fully fleshed out and written well, and several characters go through some interesting arcs, which will thoroughly invest the fans further in them and this universe. Overall, “Gently Falling Rain” is the complete sci-fi package, giving fans everything they know and love from The Orville. Some issues may affect a small group in the audience, and understandably so. However, the majority will likely be unaffected by them.

“Gently Falling Rain” sees the peace treaty with the Krill, which the Union has been working towards since “Identity, Part 2,” getting ratified by both the Union President and the Krill Supreme Chancellor. The signing of the treaty will take place on the Krill homeworld – also called Krill – which is deep in unexplored space. The Orville has been chosen to ferry the Union delegation to Krill for the signing. However, things go wrong when the Krill election goes sour, and the chancellor is deposed by an outspoken xenophobe who will stop at nothing to end the peace with the Union. This new chancellor is Teleya, the Krill with whom Ed has a long and complicated history. She executes her predecessor and captures the delegation party, of which both Captain Mercer and Ensign Burke are a part. Through the generosity of a few Krill, Ed is introduced to his and Teleya’s daughter, who might be the bridge between the two species. Ed attempts to use his daughter to connect with Teleya and get her to stop her rampage, with no success. In a harebrained rescue attempt, Doctor Finn and LaMarr, disguised as Krill, manage to free the landing party and escape on the Orville back to Union space.

Of the many cameos in this episode, the one that will excite science fiction fans the most will be the inclusion of Babylon 5’s own Captain Sheridan, Bruce Boxleitner, playing the role of the Union President. Many fans may fail to recognize him underneath all that makeup without the benefit of hearing about his casting beforehand. Nevertheless, his acting and superior talent are unmistakable, adding a fun and exciting layer to the episode.

At the beginning of “Gently Falling Rain,” Teleya gives a speech to her enraged followers, giving the audience their first glimpse at her new character. Her arc has been intriguing, starting out as a simple schoolteacher who is saved by Ed while he’s undercover among the Krill, then infiltrating the Orville in a scheme to capture Ed. Her character could have easily gone in two different ways, either with the development of sympathy for humans and a connection to them or into deeper rage and vitriol against them. It was an interesting choice for the show to go with the latter path, showing how seeing one’s enemies for who they are can sometimes lead to deeper hate and xenophobia than ever. The speech Teleya gives is a bit generic, with common and uninspired rhetoric, but it concisely portrays the direction her character has gone. Overall, the choice to go this route with Teleya is surprising and offers the most in terms of plot and conflict to the story. Teleya’s other scenes are all tense and frightening, depicting her as an intimidating foe to be reckoned with.

One of the episode’s simplest yet best scenes is when Ed and Kelly receive the news that they will be transporting the delegation to Krill. Their pure excitement at the prospect of exploration and the possibility of peace is infectious. This small moment may zip by without the audience giving it any note. However, it is essential to depict their characters’ priorities again and show how focused on exploration they are, despite the coming conflicts. Just like classic Star Trek, curiosity fuels these two intrepid explorers. This philosophy is wholly opposed to that of current Kurtzman Star Trek, which is, again, a great example of why The Orville speaks to past Star Trek fans so profoundly. It is a shame that a show called Star Trek: Discovery is more focused on soap opera drama than actual discovery. Star Trek isn’t about exploration anymore, and that is a shame. This one scene does more to show an “exploration first” mentality than a decade of Kurtzman’s writing has ever demonstrated. 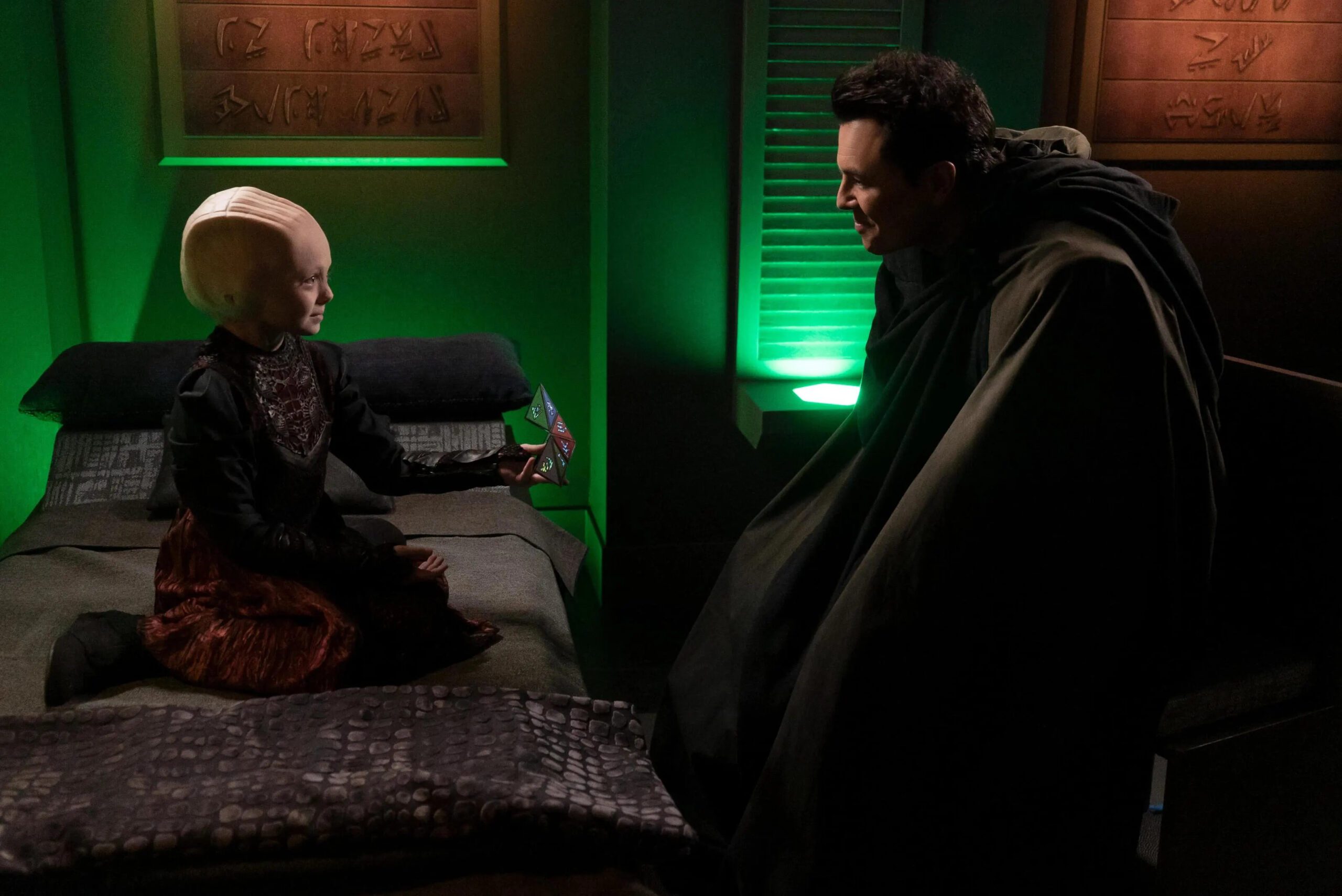 Despite the quality of the aforementioned scene, it is not the best of the episode. That title goes to the scene in which Ed meets his daughter for the first time. Their interaction is beautiful and simple, perfectly portraying his emotions and newfound love for her, marking the beginning of a beautiful relationship. Its simplicity cannot be understated; modern writers act as if it is so difficult to show character relationships, but that is not the case. Just a few lines like “That’s a beautiful name” and “It’s easy; I’ll show you” do more to flesh out this relationship than many Hollywood writers seem capable of these days. This scene makes it easy for the audience to see how happy Ed is to find out about his daughter, setting up the decision he makes at the end not to force her out of hiding to use her as a political weapon to take down Teleya. He believes that she deserves a good childhood no matter what. It is a very well-executed scene that impacts so many characters. It may even mark the beginning of a new arc for Ed, setting him up for an intriguing future.

Another element worth mentioning is the final action sequence, which sees the rescue of the landing party and a space battle against the Krill. It features some top-tier CGI and phenomenal action that is properly set up by the writing and characters to make it feel earned. The whole sequence is tense and beautifully shot, immersing the audience in the action. 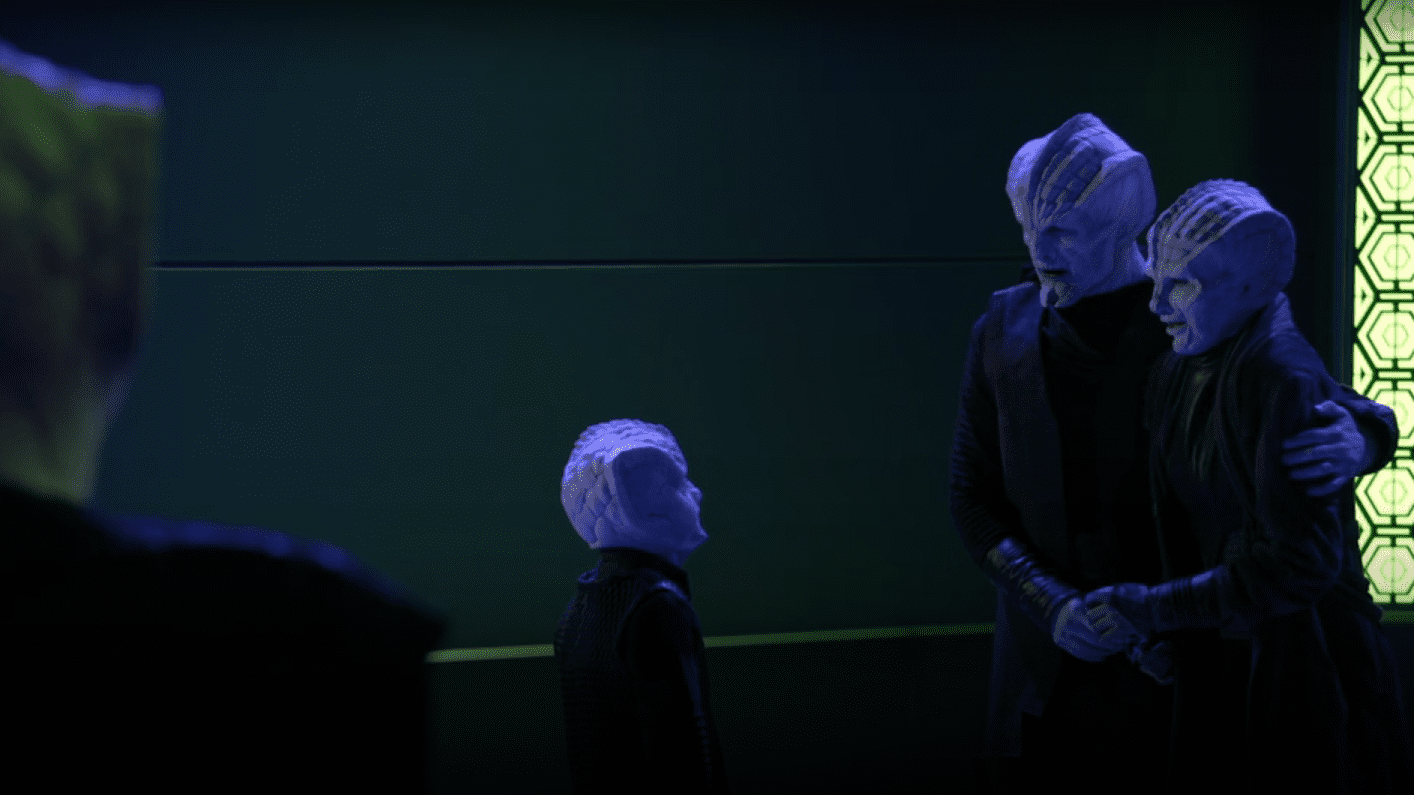 The part of the episode that will divide fans the most is also the worst one, but it still bears mentioning here. Seth MacFarlane displayed an extreme degree of restraint when it came to the writing of “Gently Falling Rain.” Most people have seen his Twitter account and know how outspoken he is on political issues. He could have easily succumbed to his emotions and stuffed the episode with unnecessary and distracting political messaging. However, he kept himself in check. He had so many opportunities to talk about Trump, Biden, the election, election fraud, counting votes, or even January 6th. He held off making any concrete statements on any of these, focusing instead on the story. What political stuff he did include is not ham-fisted and services the plot instead of attacking or antagonizing anyone in any modern-day situations. Although, if this assumption is mistaken, he very ineptly made any political statements because any comparisons were very unclear. It definitely seems like “Gently Falling Rain” could have been written a decade ago and come out the exact same way without any references to modern-day politics.

Despite this, there are so many political scenes and discussions in “Gently Falling Rain” that it is entirely understandable for the disenfranchised fans of Star Trek and other series to feel it’s either extremely woke or the opposite. Neither side is truly right or wrong in this instance, but at least what politics are included mostly benefit the story.

The one political scene that will be the most controversial is also the weakest, and the one that doesn’t serve the story. It comes across as random and derails the narrative track of the episode, slowing the pace to a grinding halt. The scene in question features Teleya taking Ed to see the punishment for abortions in the Krill society. The parents of the aborted child are forced to see a holographic representation of their child and confront it, telling the child why they decided to abort it. Ed finds this abhorrent and disgusting.

This entire abortion portion of the story is wholly unnecessary and doesn’t complement Ed and Teleya’s conflict over their daughter. Ed just asks why she would keep the child if she did not want to be with her or acknowledge her existence. That is not necessarily an opening to go to a completely different location to spend far too long seeing what abortion looks like in Krill society. If this is supposed to be a political message about abortion, it’s an inept one, not arguing for one side above the other. It comes across as unnecessary and as a shoehorned-in concept that the writers thought was cool. It could have been cut out of the episode entirely, and it would have affected nothing while trimming the runtime and fixing the pacing issue it causes. 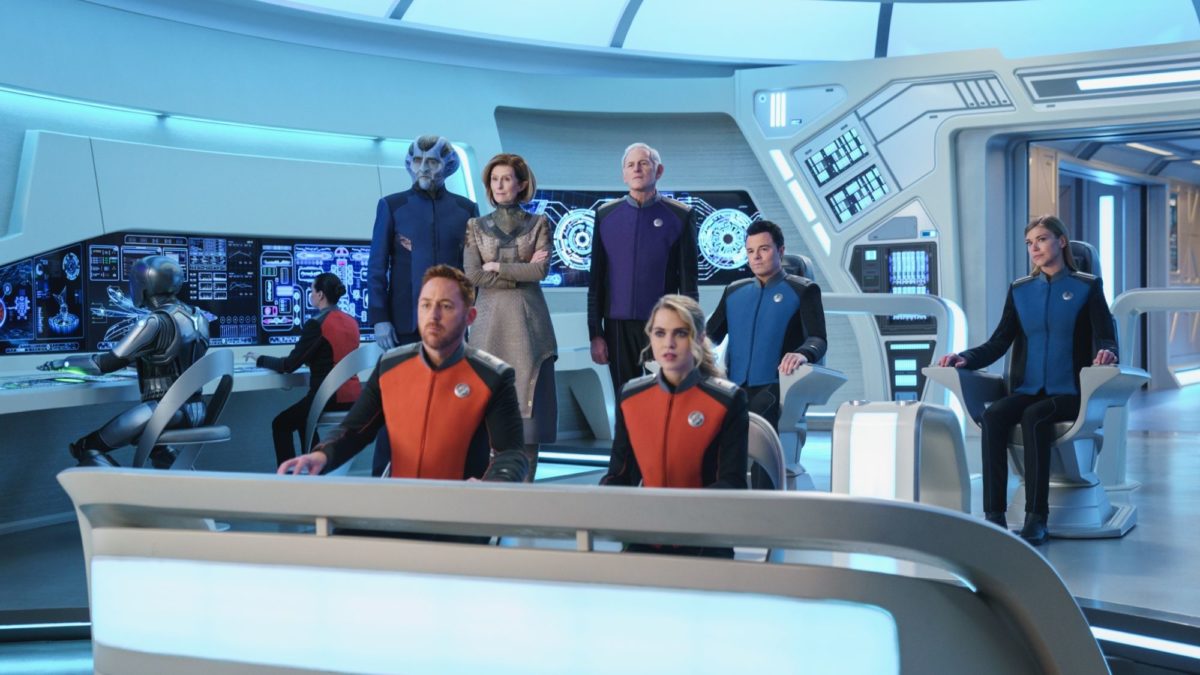 Overall, the restraint Seth MacFarlane demonstrates regarding his politics is admirable, as a lot of Hollywood is not capable of showing any self-control these days. Most audience members can respect anyone’s personal politics as long as they do not interfere with their writing or stop the story from coming first. “Gently Falling Rain” definitely feels story-first, despite this one divergent scene.

The political intrigue of the episode is done very well overall, and “Gently Falling Rain” fully recoups the loss in quality from “Mortality Paradox.” Fans of The Orville can still look forward to each new episode with excitement, and little need to be afraid of the series losing its stellar quality.

The political intrigue of the episode was overall done very well, and “Gently Falling Rain” fully recouped the loss in quality from the previous episode.