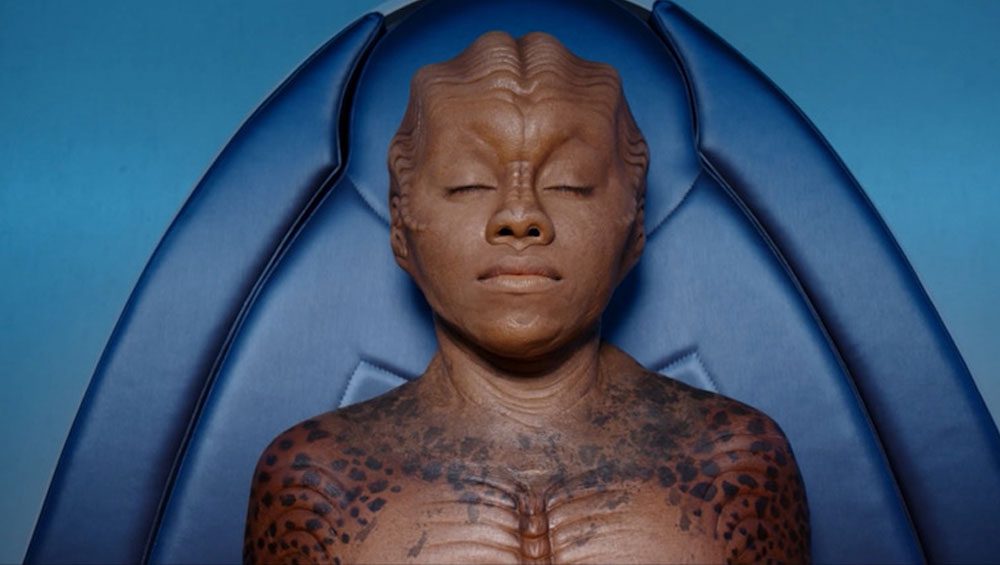 The Orville: New Horizons has reached its halfway point with the recent release of “A Tale of Two Topas,” which acts as the thrilling sequel to season 1’s “About a Girl.” This episode may be the most controversial of the show to date. It tackles heavy and uncomfortable current issues such as trans rights, trans children, and the right to choose. However, what sets this apart from typical Hollywood propaganda is its intelligent writing and incredible performances. Despite its heavy subject matter, “A Tale of Two Topas” does not antagonize anyone in any sort of current political debate and merely uses its subject matter as a vehicle for the plot and character development.

Additionally, there are enough variables changed in the situations and conflicts presented that there is no precise parallel to any exact current-day issues. For those disenfranchised and beaten by the constantly woke Hollywood, it is entirely understandable if this episode turns you off The Orville or makes you feel unduly uncomfortable. Nevertheless, the majority of the audience will be able to see past this and enjoy the superior writing of which The Orville is still the master.

“A Tale of Two Topas” follows Topa fighting the inner hate and discomfort that has defined Topa’s life. As an outsider looking in who has been filled with guilt for the part she played in Topa’s non-consensual gender reassignment surgery, Kelly gives in and points Topa down a path to discovering the truth about the gender reassignment. This decision puts Kelly at odds with Kylden and, seemingly, Bortus, but it is soon revealed that Bortus’s own guilt has overcome him, as he also helps Topa discover the truth. With Topa’s true self revealed, Topa wishes to reverse the gender alteration surgery for which Topa had not given consent. Topa’s wishes seem impossible to accommodate, as tensions with the Moclans tie the Union’s hands and prevent them from aiding Topa. Through some ingenious technical loopholes, Isaac is able to perform the gender restoration surgery without putting relations with the Moclans at undue risk. With the surgery successful, the episode closes with a now restored Topa taking charge of the Orville and giving the command to engage.

“A Tale of Two Topas” does tackle some difficult subject matter, especially considering what month it is. However, the fact that Topa was originally a female and could not consent to the initial gender reassignment creates enough ambiguity to not come across as overly preachy or one-sided. Rather, with these particular variables, the episode is able to focus on characters and plot rather than a political message. Again, if anyone in the audience is unable to separate current-day events from the narrative of this episode, that is completely understandable and is not necessarily unwarranted considering Hollywood’s current state.

Star Trek was always about making you think, not telling you what to think. The fact that this is “A Tale of Two Topas” and The Orville’s purpose again solidifies why this show is the true spiritual sequel to Classic Trek. 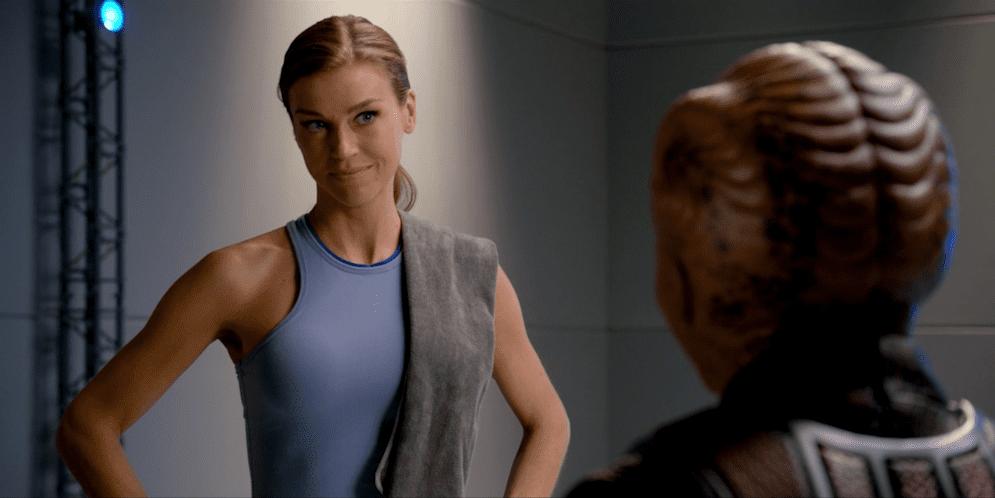 As a character-driven episode over plot or action, “A Tale of Two Topas” may appeal to some members of the audience more than others, but it excels at being what it tries to be and must be praised for that if nothing else. This episode has no action to speak of, which is not to its detriment overall. The character writing and the performances are so stellar that it more than makes up for the lack of action.

In a better era, this would not bear mentioning, but in today’s Hollywood — which is rife with inconsistent characters, motivations, and overall story concepts — The Orville must be praised for consistently reminding the audience of the characters’ primary motives. They are explorers first, not military officers. So the opening sequence, with the fun nods to Indiana Jones, is important. The crews’ unabashed excitement at discovering a new species and world of which they have no understanding is palpable and infectious. Their curiosity is what drives them, and that is part of why they are so compelling and easy to connect with as characters.

Additionally, the small bit of continuity from the prior episode regarding Ed’s new daughter is also rare these days. His brief speech about writing her letters so that, if they ever meet again, she will know that he was always thinking of her is a sweet little piece of dialogue that further cements him as a good dad, which is also so rare in today’s Hollywood. 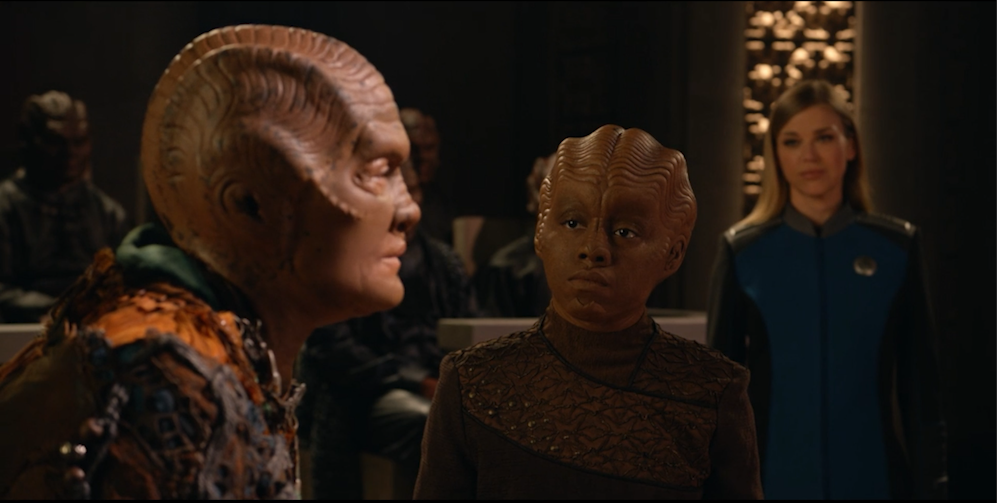 The real standout star performance of “A Tale of Two Topas” is the actress playing Topa. Imani Pullman does an incredible job of showing the conflict within many adolescent teens regardless of the cause. One of the episode’s most powerful moments is when Topa opens up to Kelly about the war raging within. The dialogue and the performance perfectly sell this battered and confused teen trying to understand the cause of that confusion. This scene is not only essential to understanding Topa’s obstacles but also in understanding Kelly’s motivations and setting up the overall plot of the episode. This speech is the foundation of “A Tale of Two Topas,” carrying the narrative through the episode.

Whether or not the cause is the same, many young people can relate to Topa’s struggle, as it is a common obstacle that comes with youth. This is another prime example that a character does not need to look exactly like you for you to relate closely to them. It is their struggle, their drive, and their character which inspire connection. Both the writing and the acting for Topa will inspire this connection among much of the audience. 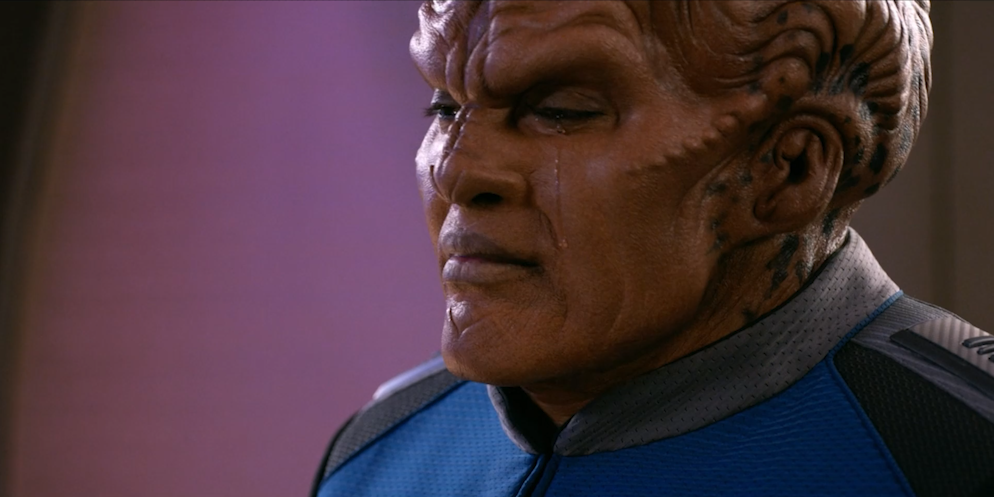 Another powerful scene is when Bortus breaks down in front of Kelly for the first time. Seeing such a calm and collected character known for his emotional aloofness be so vulnerable is a shocking and moving sequence, driven home by the incredible performances of both Adriana Palicki’s Kelly and Peter Macon’s Bortus. Bortus feels so much guilt for what he allowed to happen to his own child. The whole situation is just heartbreaking.

The stunning Adrianne Palicki, in particular, gives her best performance of the season and perhaps even the best of her career. The conflict and guilt she feels are displayed in so many compelling yet minor mannerisms that leave no doubt about what she’s thinking and feeling every second she’s on screen. Palicki eats up every scene she’s in, shining with an impressive talent that is not displayed often in modern Hollywood.

Klyden was designed as a character the audience is supposed to hate and often makes heinous decisions and says horrific things — especially in this episode — but a fair degree of sympathy is warranted. The influence of tradition is powerful and can corrupt even the best of people. Though he is firmly entrenched as the villain once he says that he wishes Topa had never been born, his point of view is still understandable. He has lost all say over his child and knows better than anyone else the shame and ridicule that will befall Topa if the gender reassignment surgery is reversed. Klyden is very much in the wrong, but in an understandable and relatable way, to a certain extent. 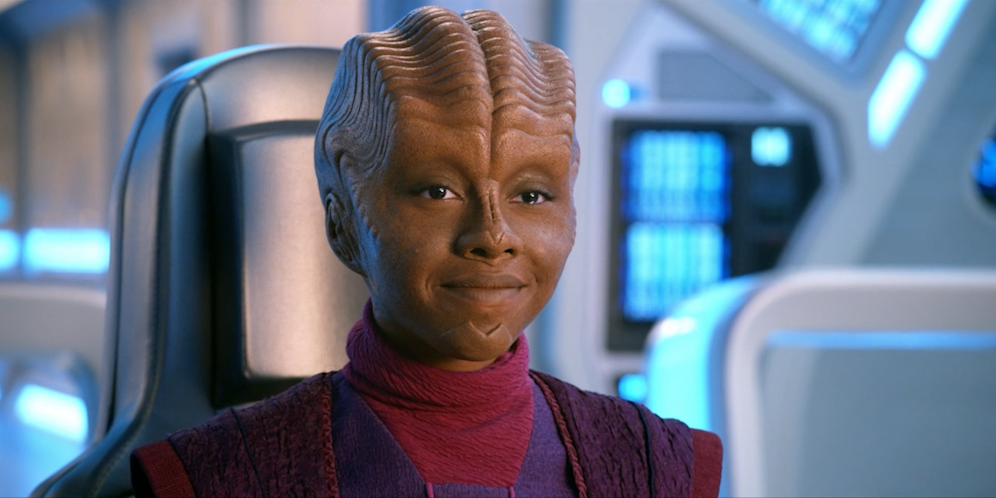 “A Tale of Two Topas” may divide much of the fanbase, either because of its lack of action and focus on characters or because of the modern-day political narratives which can be created around it by both sides. However, it is still extremely well written, with three-dimensional characters embodied by talented actors. This episode is incredibly enjoyable and thought-provoking in all the best ways that Star Trek and The Orville are known for being.

The Orville: New Horizons – Episode 5 “A Tale of Two Topas”

This episode is incredibly enjoyable and thought-provoking in all the best ways that Star Trek and The Orville are known for being.