The Orville: New Horizons “From Unknown Graves” released onto Hulu last night and tackled some interesting concepts and ideas but never truly explored them in any sort of fulfilling manner. The episode is still entertaining, delivering all the things that fans have come to expect from The Orville. However, there are some meta-issues that affect the writing, causing several problems that land “From Unknown Graves” as perhaps the worst episode of the new season. That is not to say it isn’t good, because it is. The standard for The Orville is just so high that the letdowns in this episode are especially disappointing. Despite these issues, there’s still some good character work that progresses the overall story of New Horizons very well, especially when it comes to the final conflict with the Kaylons being set up for the season finale.

Some of the best parts of “From Unknown Graves” are flashbacks to the origin of the Kaylons, culminating in the murder of their Builders. This exploration into the psyche of androids who were severely abused and mistreated under the guise of superiority to precipitate slavery is fascinating. This episode thoroughly contextualizes how a species can be driven to mass genocide while still emphatically condemning their actions. The Kaylons’ decisions were still reprehensibly evil, but at least the audience can understand their motivations and empathize with them to a certain extent. This is all very neatly done while also showing the evolution of the Builders on their journey from curiosity to outright torture in not too long time span. These flashbacks are highly enjoyable and informative, concisely and effectively getting across the information needed creatively. “From Unknown Graves” could have been entirely dedicated to the Kaylons’ rise to power, and many fans would not have any issue with that decision. It could have been fascinating to truly explore the psychology of Kaylons in a dedicated episode. However, as it stands, “From Unknown Graves” still benefits from them.

The other strength of “From Unknown Graves” comes in its exploration of relationships. The relationships of LaMarr and Talla, as well as Claire and Isaac, are portrayed in very interesting ways with compelling developments while never dipping into the realm of CW cheesiness. Both these couples are very well fleshed out, making it easy for the audience to understand where every individual is coming from, even in their disagreements. 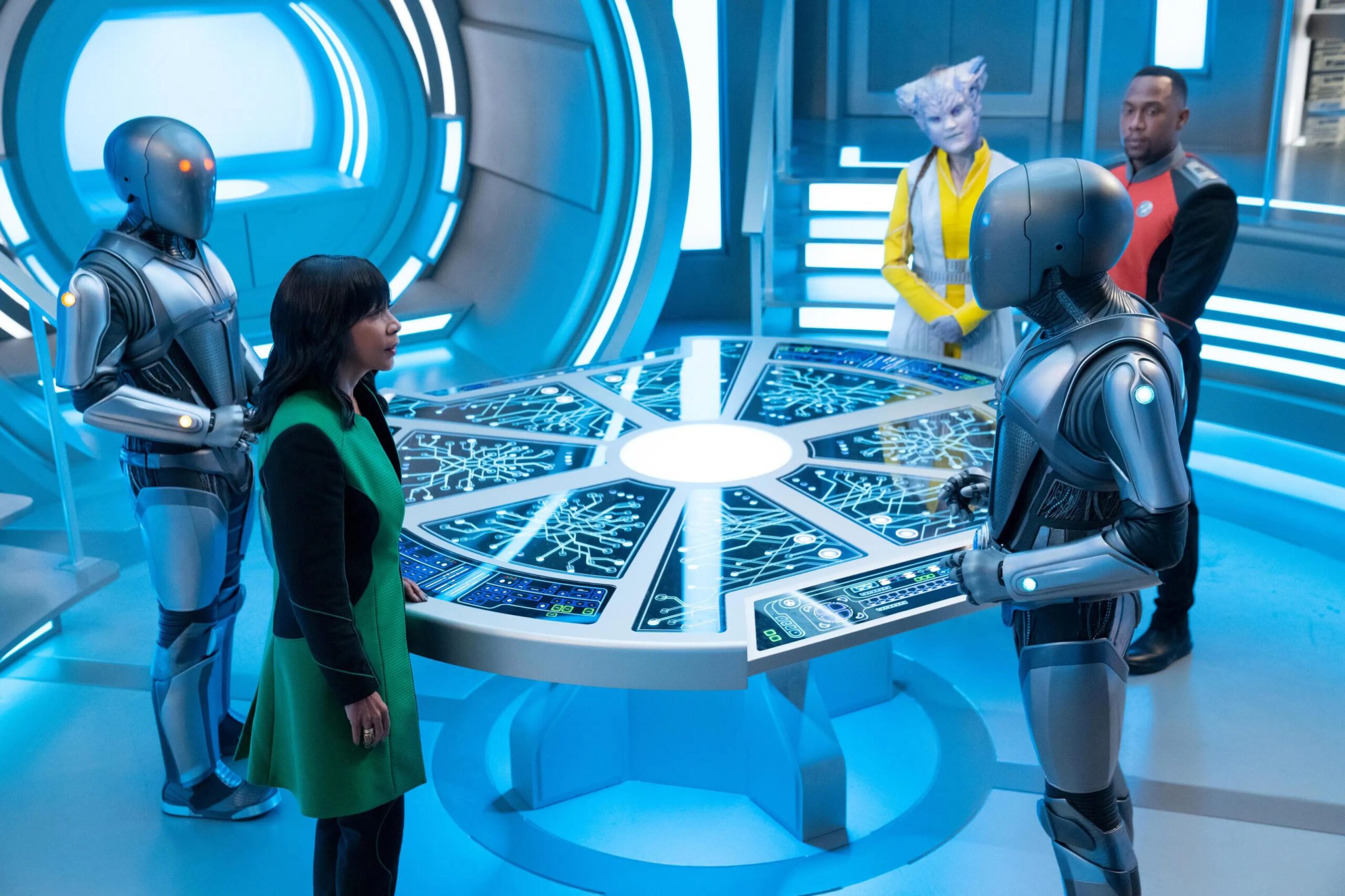 The one place where the writing of these relationships falters is in Claire’s motivation to ask Isaac to undergo surgery that will give him the capacity for emotions. It makes complete sense why she would eventually decide to ask him. However, she should have struggled with the decision far more than she does. Kelly just saying, “It’s basically therapy,” is not a satisfactory excuse or justification to immediately throw out all conflict while simultaneously saying that it’s OK for women to want to change men. Additionally, this comparison is fundamentally flawed. Therapy is vastly different than surgery to alter a person’s fundamental brain chemistry. More time needed to be dedicated to Claire realizing that asking Isaac to undergo the surgery is entirely selfish and admitting it to him. She needed to say something like, “Isaac, I know what I’m asking you is wrong and selfish, but I need to be a little selfish right now.”

Despite the issues with Isaac temporarily getting emotions, it does facilitate a moving scene with Isaac and Claire in the simulator. Mark Jackson, who plays Isaac, expresses feelings in a very three-dimensional way, easily sliding into this new performance. This sequence is incredibly risky, as oftentimes, an actor who regularly plays an android struggling to express emotions can struggle with emotional acting. As much as Brent Spiner is beloved, his performances outside that of Commander Data are underwhelming at best. That is not the case for Mark Jackson whatsoever; he really blows it away, giving the audience incredible moments with a wide span of emotions in just a brief scene. Despite this, it was the correct decision to make his emotions temporary. Isaac with emotions would change the entire dynamic of the show, perhaps hurting it as a whole. Making his emotions permanent should be saved for the series finale.

The best encounter in the episode comes at the end when Charly finally forgives Isaac and sees him as separate from the rest of his species. This small evolution of Charly’s has been well telegraphed and set up gradually in every single episode. Just a small realization that she might be wrong and that Isaac deserves empathy is a huge step for her character and is justified thoroughly. A race cannot be judged as a whole. Her speech about humanity’s tendency to simplify complex issues is fascinating and does reflect much of the human psyche. Overall, this scene is incredibly well done with some in-depth character work for Charly and Isaac. 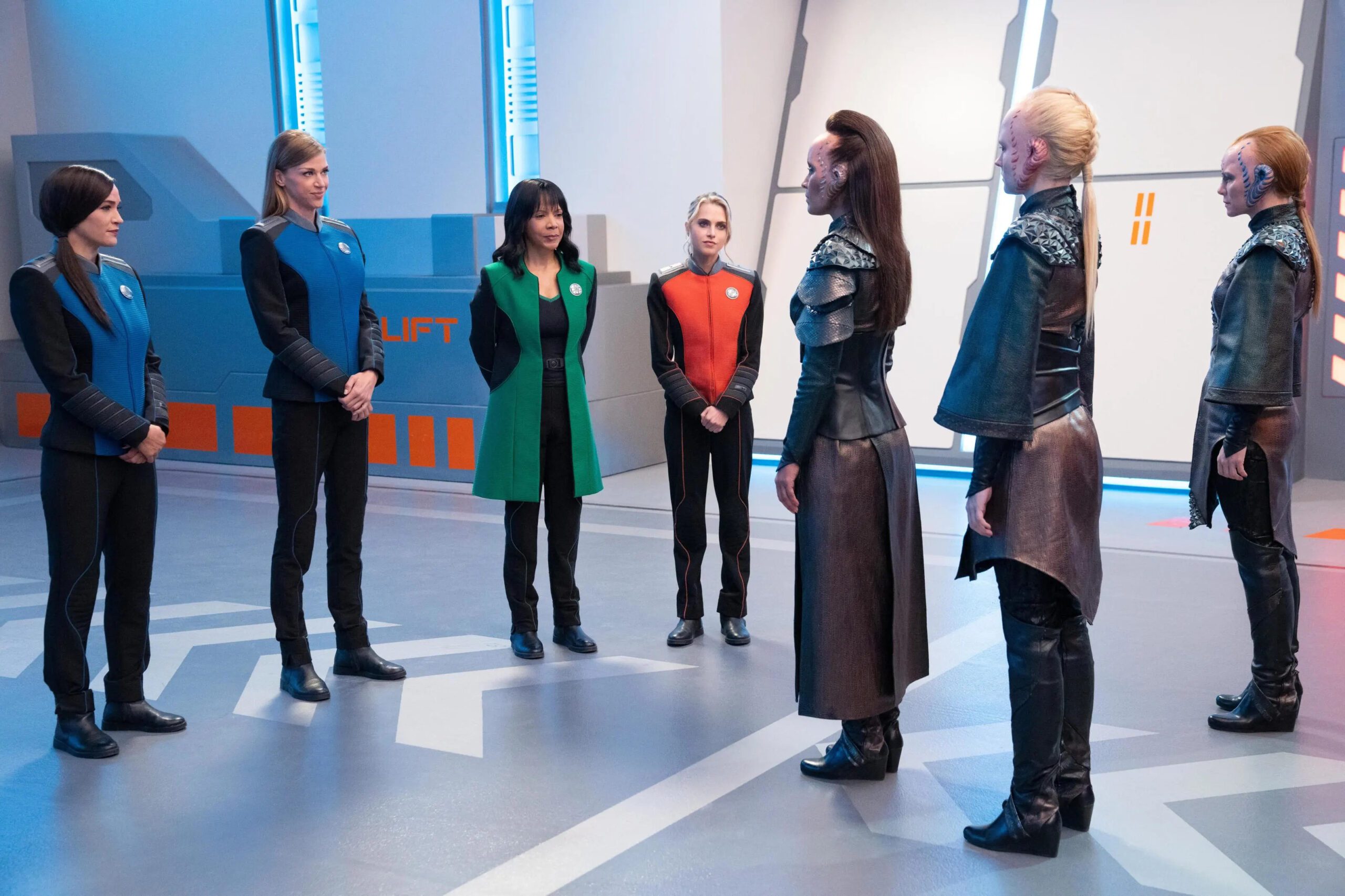 The biggest issue with “From Unknown Graves” is its B plot. The crew’s interaction with the matriarchal society is incredibly two-dimensional and shallow. Star Trek and other science fiction shows have often inversed a current issue to show the opposite extremes to make a point, as this episode endeavors to do. The Next Generation even did the same thing as “From Unknown Graves,” portraying a matriarchal society that is exposed to competent men for the first time. However, that episode treated the men involved with respect and portrayed the matriarchal society as fundamentally wrong while showing empathy for them and investigating the nuances of the situation. That is not the case for this episode whatsoever.

Rather, “From Unknown Graves” takesevery opportunity to belittle the men pretending to be inferior, constantly making jokes at their expense. Additionally, the women who are suddenly fake promoted abusetheir newfound power at every opportunity. When asked if the rest of the Union men are as stupid as Mercer and Malloy, Kelly just laughs and agrees. The episode does not explore this interesting concept or these issues with any nuance or intelligence. The decision to make all the men stupid and the women arrogant and power-hungry completely negates any sort of message that the show is trying to convey. Everything about this B plot undercuts what it’s trying to say. If the writers had put the same talent into this plotline as they did into Charly’s arc rather than simplifying the issue of sexism, this could have been a fascinating episode. As it stands, every decision made with this plot is incredibly damaging to the concept and the episode. It wasn’t written in any sort of coherent or intelligent manner.

Overall, “From Unknown Graves” is still an enjoyable episode, but it falls as one of the worst of New Horizons and mid-range for the series as a whole. Its treatment of sexism and the use of therapy as an excuse to demand your partner undergo surgery brings down its quality quite a bit. These downfalls could have been the emotional backbone of the episode and the core of the character writing if they weren’t written so incompetently.

"From Unknown Graves” was still an enjoyable episode, but it falls as one of the worst of New Horizons and mid-range for the series as a whole.