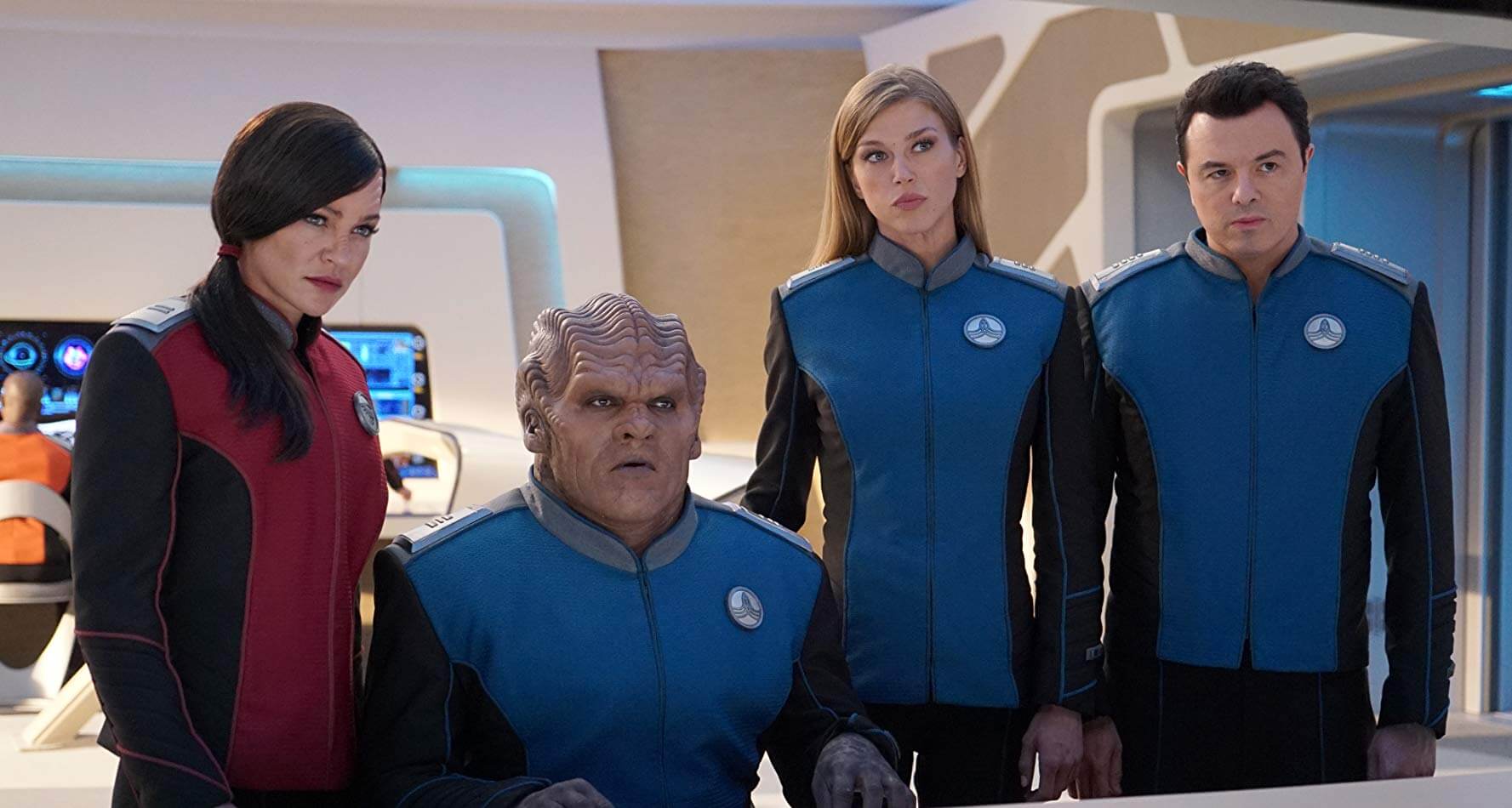 Halfway through a season that’s been heavy on character relationships and light on sci-fi action, The Orville ups the stakes considerably with “Identity, Part 1,” the phenomenal beginning of a two-parter that ranks with its very best episodes. Much like season 2, things begin on a quiet, character-driven note and escalate to something we couldn’t have imagined (bar Seth MacFarlane’s tantalizing tweets). Much of what’s come before has been building to this, and though it ends on a cliffhanger, “Identity, Part 1” feels like a satisfying payoff.

When Isaac mysteriously shuts down, the stumped Orville crew takes him to his home planet Kaylon-1 in the hopes that his fellow machines can repair him. Ed suggests to Admiral Halsey that their visit will convince the Kaylons to join the Union and help bolster their ability to resist the Krill. Claire and Isaac decide to tell Marcus and Ty that they are romantically involved. Bortus’ cake-eating preferences are revealed.

“Identity, Part 1” opens with a scene more in keeping with season 2’s general direction, as Isaac plays some sort of futuristic board game with Marcus and Ty. It’s reminiscent of Star Trek’s version of chess, with its multiple stacked boards, but the gameplay looks more like checkers. After Isaac expectedly wins, he tells the boys not to be ashamed of their limitations. When Claire arrives, she and Isaac tell them that they are a couple now, and the children are elated. Ty loves Isaac and has come to look at him as the father he never had (it’s worth noting how brave the show is to suggest that boys are better off with a father figure in their life in the current year), and Marcus isn’t in the least surprised, having easily guessed what was going on from ship scuttlebutt. It’s a nice, sweet moment, growing the characters even more and advancing Claire and Isaac’s relationship; it is also the calm before the storm because Isaac collapses right after getting the boys’ approval, and “Identity, Part 1” never lets up again.

When neither Claire nor John can figure out how to help Isaac, or even deduce what’s wrong with him, Ed asks for permission to take him to Kaylon-1, where his advanced race may be able to fix their friend. Admiral Halsey (a welcome Victor Garber; all the admirals are good, but I always delight when Garber shows up) signs off on the visit in the hopes the Kaylons will finally decide to join the Union and help fight the Krill, which was the basis for Isaac’s assignment on board the Orville. When they arrive, the visuals are awe-inspiring; once more, The Orville creates a planet unique from all the others it’s visited, and the design is completely appropriate for its inhabitants. Kaylon-1 looks almost like the inside of a computer, with long, wire-like streaks connecting massive metal towers that loom over the docking ship like gothic hellscapes. The brilliance in this motif is the horror contained in the technologically advanced world, a harbinger of what’s to come in “Identity, Part 1” from the Kaylons themselves. 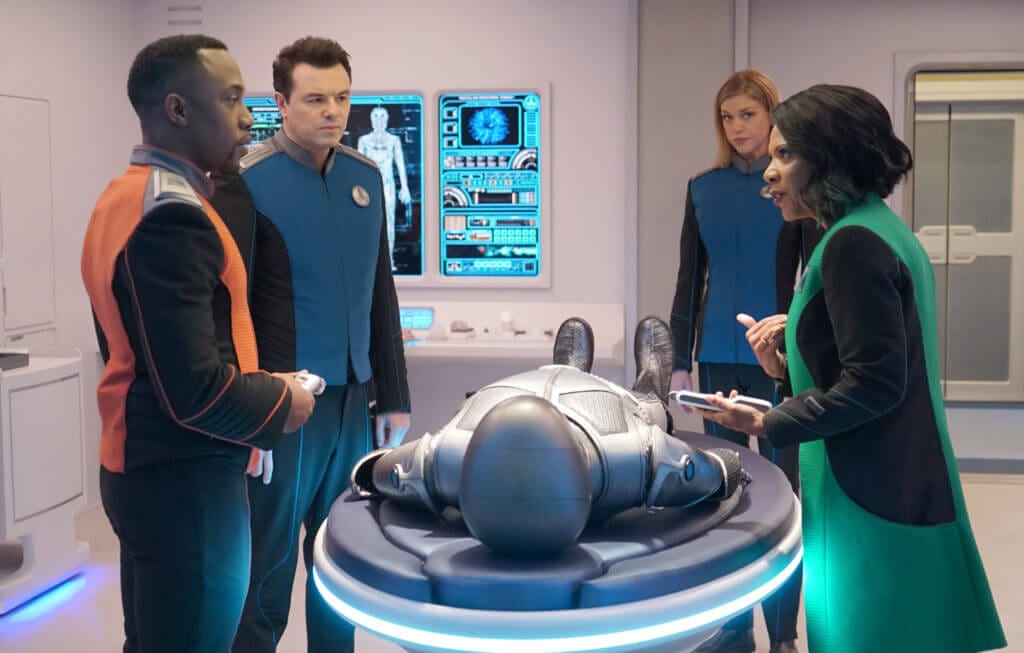 Once his brethren resurrect him, Isaac is like a completely different person. The Kaylons switched him off in the first place, as he had learned everything they needed to know about humans, and his mission, therefore, had ended. Now, Isaac behaves as though he’d never grown an inch on the Orville. He’s dismissive of the crew, including Claire and her sons, coldly declaring that he will be leaving them now that he no longer has a purpose on the ship. There is deft acting on Marcus Jackson’s part, as Isaac’s coldness in “Identity, Part 1” is different from his usual aloofness. But when Bortus and Tala stumble on a mass subterranean grave on Kaylon-1, the Kaylons’ true motives become clear: they wish to exterminate all organic life and insert themselves as the sole bearers of evolutionary life in the universe, with Earth their first target. Isaac has merely been facilitating this goal all along. His friendships, his romance, his fatherly love were masks to help him give his fellow Kaylons everything they’d need to make their power play.

The idea of artificial intelligence becoming too sentient and turning on its creators is a well-worn sci-fi trope. Blade Runner, The Terminator, The Matrix, even Ultron from Marvel Comics are all variations on this story, and there are undoubtedly many more still to come. What makes any given version succeed or fail is the execution and what it has to say about humanity. While those other stories dealt with the class system, militarization, and industrialization, “Identity, Part 1” is about the virtues of humanity, even in its perceived shortcomings. Isaac’s encouragement of Marcus and Ty in the very beginning is the key: he tells them not to be ashamed of their limitations. The Kaylons, on the other hand, read Ed and Kelly a list of humanity’s deficiencies, using them as reasons not to bother aligning with the Earth-based Union. In reality, though, the highly evolved Kaylons are much more horrific than humans could ever be, seeking to commit genocide on a universal scale and justifying it in their own superiority. Wiping out their creators was, they insist, a matter of survival, and their planned destruction of every biological species is to prevent anyone else from trying to “constrain” them as they populate other worlds. Like (movie) Thanos, the Kaylons want what’s best for the universe – which just so happens, by their estimation, to be them.

That is why their disdain for humanity’s foibles is so important to “Identity, Part 1.” Among the many things they mention in their complaints about us is individualism. The Kaylons are a sort of collective, a series of parts serving the whole, just like a machine, and any notion of the individual is a threat to that. While Ed counters them with the teamwork inherent in the Union, he still leaves room for individuality. In the past, The Orville has very much shown that an individual acting on his or her own can achieve a good higher than doing what the governing body orders can. In “Command Performance,” the second episode of season 1, Alara is ordered to leave Ed and Kelly on the zoo planet; it’s only in defying the admiralty and risking her career that she saves them. The crew fights its hardest to allow Bortus’ daughter Topa to decide her own destiny rather than have it forced upon her in “About a Girl.” Ed and Gordon have to think on their feet in “Krill,” finding a constructive solution to an impossible problem. And the collective justice of “Majority Rule” is a nightmare that destroys individuality. The Kaylons, on the other hand, are the peak of collectivism, and they’re about to snuff out all life in the universe without a second thought. While The Orville, like Star Trek, longs for an age where we can all come together, it also bristles against the destruction of the individual, and that’s a future I can get behind. 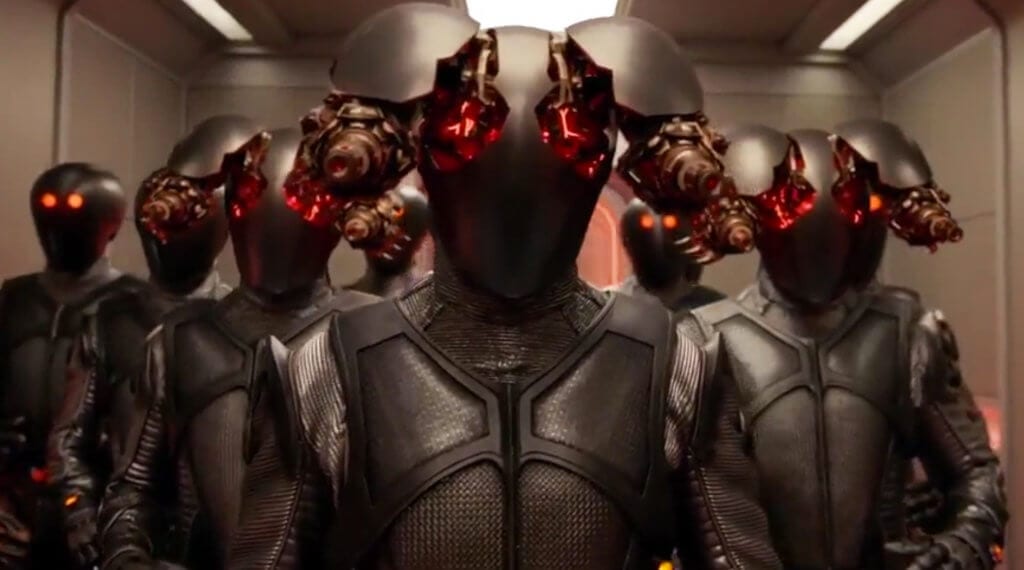 Every element of “Identity, Part 1” is excellent. The acting is some of the best yet on the show, particularly from Penny Johnson Jerald, who goes from a mother’s strength to a lover’s fear in the space of about ten seconds. It’s heartbreaking when she implores Isaac not to die, and you can feel her pain when Ty lashes out at her in frustration. Speaking of Ty, Kai Di’Nilo Wener expertly shows his admiration of Isaac and his determination to prove that his dad is a good man who loves his new family.  “Identity, Part 1” is also perhaps the musical highlight of The Orville so far, with chilling tones creating a sense of foreboding when the ship arrives on Kaylon-1, and an epic march to war as the Kaylons prepare their assault of Earth with our heroes in custody. In addition to the planet, the designs of the Kaylons when they arm themselves for battle is scary and intimidating; the guns emerging from their heads strike a terrifying image of an unbeatable foe. And all this horror is punctuated by some wonderful humor. Every joke lands, with some highlights being Bortus’ insistence on an end slice of cake, Ed’s metaphor to Admiral Halsey to illustrate their inability to fix Isaac, and the question of chair availability on Kaylon-1. “Identity, Part 1” is as close to perfect as it gets.

“Identity, Part 1” might be the best episode of The Orville yet. The character work from the slower beginning of the season pays off, a frightening new enemy emerges, and the Earth may well be doomed. There’s also hilarious comedy, touching humanity, marvelous music and design, and a call for the individual to resist conformity. Part 2 has a lot to live up to.

“Identity, Part 1” might be the best episode of The Orville yet. The character work from the slower beginning of the season pays off, a frightening new enemy emerges, and the Earth may well be doomed. There’s also hilarious comedy, touching humanity, marvelous music and design, and a call for the individual to resist conformity. Part 2 has a lot to live up to.