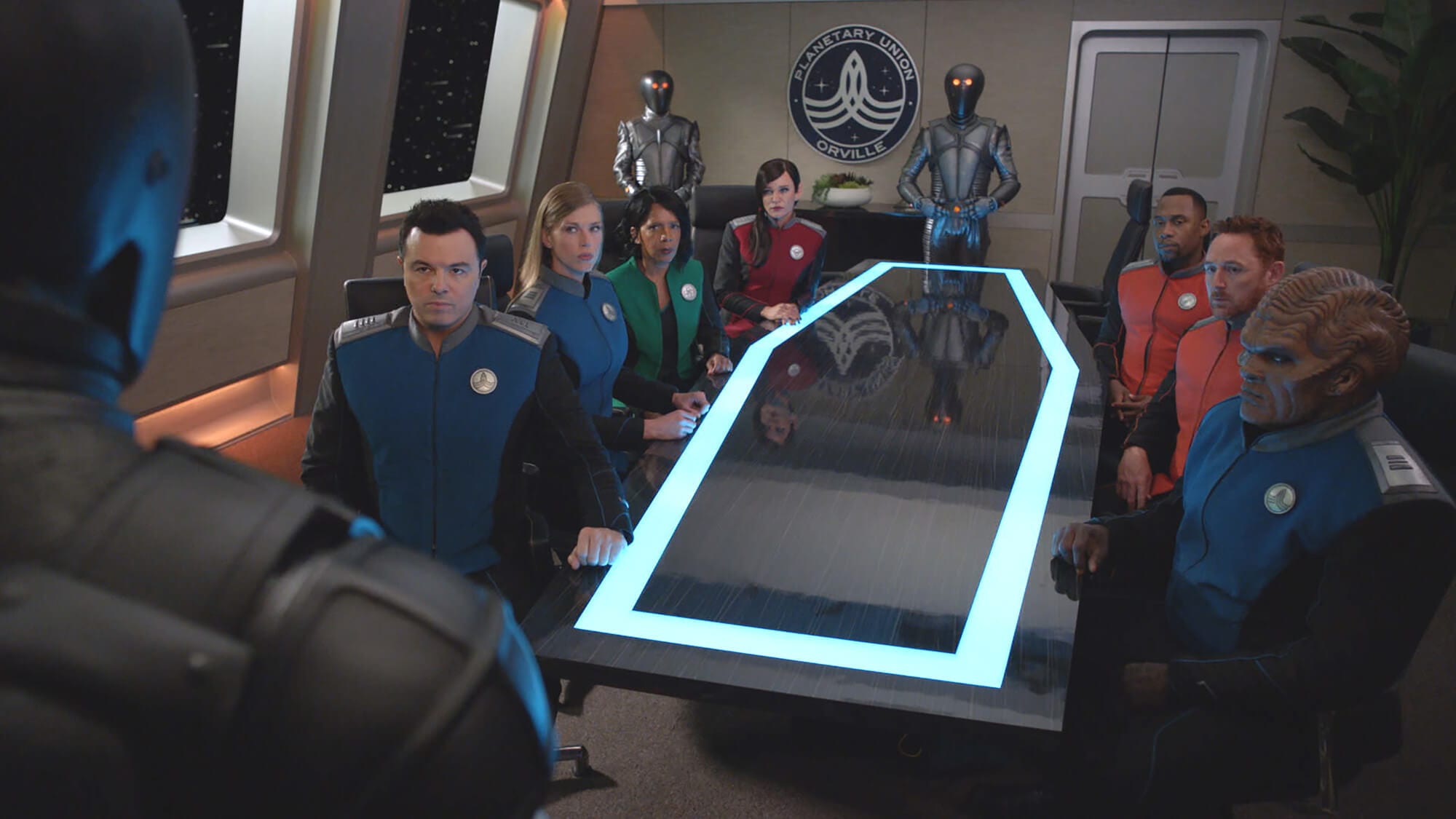 Following up the cliffhanger ending of last week’s first half of this mid-season two-parter, “Identity, Part 2” is a tense, rousing, immensely satisfying conclusion that wraps up the conflict while setting up new ideas and potential storylines for the show’s future. There’s lots of action, some laughs, and a ton of heart in what, as I said about “Part I,” could be The Orville’s best episode.

The Kaylons have taken control of the Orville and are using it to lead their attack fleet to Earth so they can more easily wipe out the human race. Ed and the captive crew discuss their options. Kelly thinks outside the box. Ty refuses to give up on Isaac.

Right off the bat, “Identity, Part 2” establishes the apparent hopelessness of the crew’s predicament. The Kaylons are on the bridge, plotting a course for Earth with their warships in tow, while Ed and the others are being held in the cargo bay. When Ty tries to rush through the doors in search of Isaac, one of the Kaylon guards releases the guns in his head (this image is still creepy as all get-out, by the way) and fires a blast at Tala, knocking her out and nearly killing her. Much like Infinity War’s opening moments, the most powerful of our heroes is rendered powerless, reinforcing how much trouble Ed and his team are in, and how formidable the Kaylons are. This continues throughout the episode; not for a moment of “Identity, Part 2” do the villains lose their menace or appear at a severe disadvantage.

Take, for example, Ed’s initial plan. He surmises that the crew is being kept alive for a reason, and he ends up being right: the Kaylons want them to assure the admiralty that the robotic race has come to join the Union, which will allow them to bypass Earth’s defenses and enact their genocidal plot. A test run presents itself when a fellow Union ship, the Roosevelt, happens by the fleet and the Kaylons want Ed to assure them all is well. Ed comes up with the expected movie/TV plan – give the Roosevelt’s captain (played by Carlos Bernard of the legendary 24; I wonder if director Jon Cassar had something to do with this grin-inducing casting) a coded message so he knows something’s up and can warn the rest of the Union. The ruse fails, however, as the Kaylons are fully aware of the danger code and blow away the Roosevelt in response; they then kill a random crewman to show Ed what will happen if he tries to pull a fast one on them again. Not only is this an expert inversion of a tried and true trope, but it makes both Ed and the Kaylons look smart while giving the Kaylons a chance to demonstrate their ruthlessness. “Identity, Part 2” has the kind of bad guys it feels like we rarely see anymore: scary ones.

But the Kaylons aren’t one-dimensional black hats either. They’re clearly the villains, but despite their disdain for the weaknesses inherent in humanity, their motives are all too human. The leader, referred to as the Kaylon Primary, explains to the crew that the race that created the Kaylons forced them into bondage, going so far as to program them with the ability to feel pain so that they could be more easily controlled. This casts an entirely new light on their dark secret; the Kaylons did not begin as conquerors or supremacists, but as slaves fighting for their freedom. When Gordon argues that mankind is different from the Kaylons’ creators, the Primary retorts that Earth’s history is rife with humans enslaving their own people, and the Kaylons believe it is only a matter of time before someone else comes for them. Once more, The Orville raises many fascinating questions from the subtle allusions to real-world issues. Where is the line at which self-preservation becomes revenge, and when the offense is horrific enough, does it even matter? At what point is a wronged people’s paranoia no longer justified? Where should sympathy end when dealing with a threat that has a legitimate grievance? Another Marvel movie villain comes to mind when examining this aspect of the Kaylons: Black Panther’s Killmonger. Like Killmonger, hate and fear have consumed the Kaylons, and now they have become the very thing they seek to destroy (recall that, in the early episodes, the Kaylons were referred to as racists for their superiority; “Identity, Part 2” is the payoff to that notion). 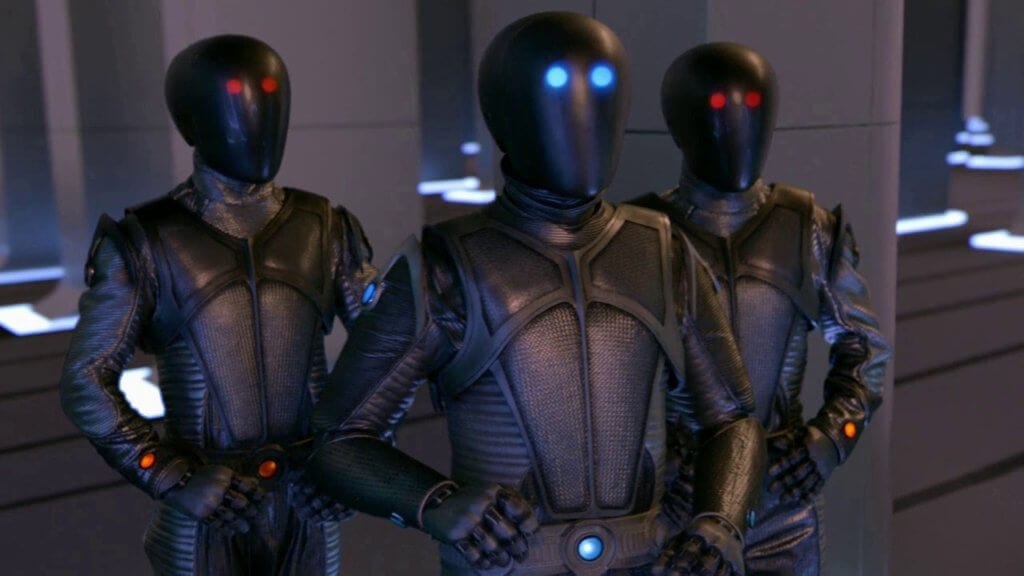 Then, there is Isaac. The Primary explains that Isaac was created after the Kaylon insurrection, meaning he has no experience with the injustices his brethren have suffered. He represents the next generation, the ones raised with the bitterness of the wronged while having the perspective of someone from a better world. Isaac’s origins explain his eyes being blue in contrast to the rest of the Kaylons’ red, but the significance of this difference is expanded in “Identity, Part 2.” While it previously served both to identify him to the viewers and to indicate that he may not be as evil as the others, it now communicates that Isaac is looking on humanity with different eyes than the Kaylons. He doesn’t see potential oppressors; he sees his new friends. In greater terms, he sees the potential for a better tomorrow, one where we all evolve to be better people, even the Kaylons. A future filled with hope has been one of the hallmarks of The Orville from day one, as it was for Star Trek, and Isaac may now be the perfect embodiment of that hope. The show doesn’t take the easy way out (which is what I assumed they’d do) and declare Isaac a spy from the beginning; he really was helping the Kaylons, and his turn is a struggle for him. So too will the crew’s acceptance of him (for those who decide to accept him as one of their own again) be a struggle, and one I’m sure will play out at least for the rest of the season.

“Identity, Part 2” is one of those episodes that throws everything but the kitchen sink at the fans, and thanks to the buildup throughout the deliberately paced first half of the season, it is cathartic. Action permeates the whole runtime, with the odd skirmish here and there finally giving way to a space battle that puts Disney’s Star Wars to shame. The Union and the Krill teaming up to fight the Kaylons has the feel of a massive war, even though it’s really just one battle, as former enemies from across the universe tackle a common threat, with the fate of the galaxy hanging in the balance. (Contrast this to The Last Jedi, which felt like the Sharks rumbling with the Jets.) The ship-to-ship warfare is exhilarating, and the special effects are impeccable, as is the rousing score. As with the entirety of “Identity, Part 2,” even when the Krill show up, it doesn’t feel like the Kaylons are toast; just that the good guys now have a fighting chance. And I cheered mightily when Isaac made short work of the Primary and his top brass. The action in “Identity, Part 2” is unlike anything The Orville has done yet, and it’s a smashing success. Thank God for the great Jon Cassar. 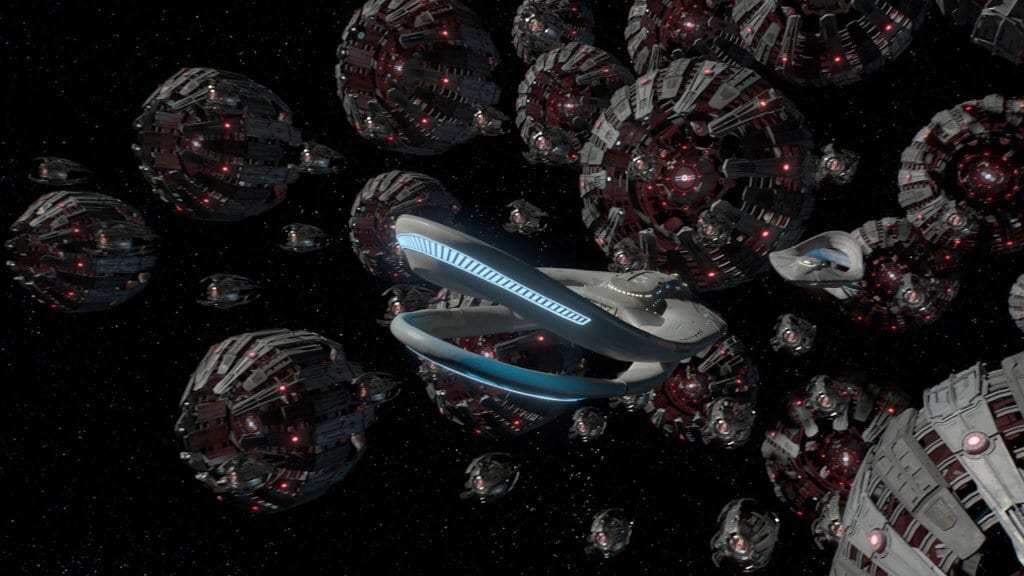 Even when the action pauses, “Identity, Part 2” is oozing with tension. Yaphit and Ty’s sneaky mission leaves you breathless, and the air is so thick you believe one of them could die – and I was sure Yaphit had. (Let’s also take a minute and applaud The Orville for making such excellent use of Yaphit, who in any other show would never be anything more than comic relief; they’d all be dead without the puddle of slime with Norm MacDonald’s instantly recognizable voice.) Kelly and Gordon’s desperate trip to Krill territory is also a gasper; even though, logically, it’s obvious they’ll not only survive but get the Krill to help them, the staging and acting convince you otherwise. Nick Chinlund, unrecognizable under heavy alien makeup, is the perfect choice to play a Krill captain, and he knows just how to exude the menace we need to believe Kelly and Gordon may have made a big mistake. This all gives even more satisfaction to the Krill’s last-minute save. And through it all, The Orville manages some big laughs, like Gordon invoking Top Gun during his dogfight with the Kaylons, or Yaphit’s parting shot to a Kaylon guard before wasting him. And the running gag about the name of the Krill’s deity makes its return.

I do my best to keep my personal biases in check when reviewing something I love, but “Identity, Part 2” is absolute perfection. Every single element of this episode is exceptional, from the acting to the execution of the themes, the action, special effects, music, and humor. This story is finished, but there are threads to be explored in the future, both in terms of the larger story and the characters. At the moment, this feels like the pinnacle of The Orville, but I look forward to seeing them try to top it.

“Identity, Part 2” is absolute perfection. Every single element of this episode is exceptional, from the acting to the execution of the themes, the action, special effects, music, and humor. This story is finished, but there are threads to be explored in the future, both in terms of the larger story and the characters.