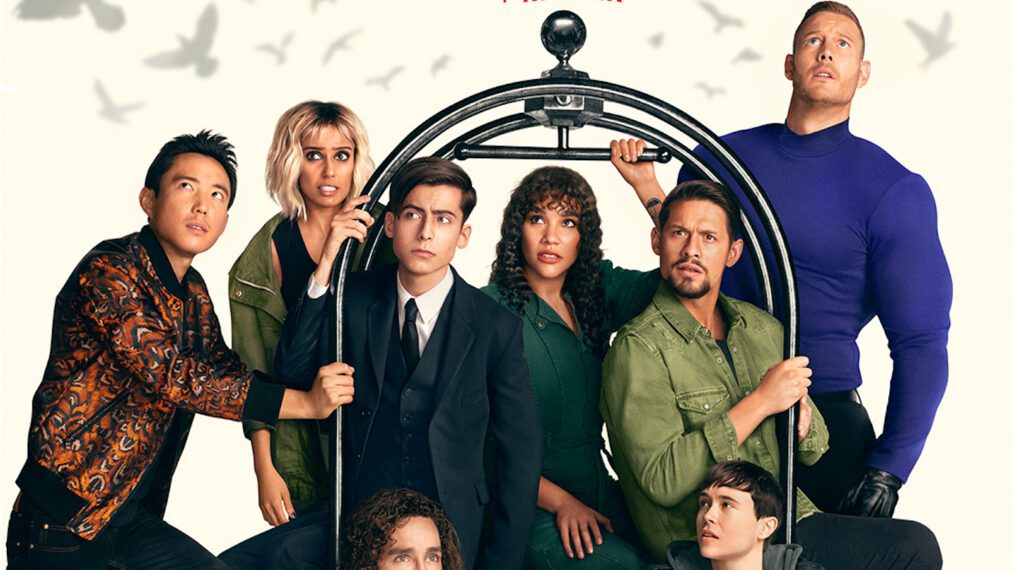 Netflix’s The Umbrella Academy season 3 was recently released onto Netflix, bringing with it all the tropes and comedy to which fans of this series have become accustomed. The phenomenal 1st season is one of the greatest things Netflix has ever created. The lackluster 2nd season was a rollercoaster from the excellent to the abominable, without setup or payoff to predict the rapid changes in quality. Season 3 is the spiritual sequel to season 2, at least regarding its quality. Season 3 plays jump rope with the line of mediocrity, rapidly snapping into brilliance before diving deep into some of the most inferior content that Netflix is capable of producing. The whiplash this gives fans could create an understandable dislike for the overall product. Its inconsistency can leave many underwhelmed by this chapter in the Umbrella Academy saga. Again, like the 2nd season, it started off decent and ended strong with a fluctuating-at-best middle eight episodes.

Season 3 of the Umbrella Academy starts in an alternate version of the Umbrellas’ present time following their exorbitant meddling in the 1960s. They soon come to blows with the superhero academy that took their place in this timeline, the Sparrows. However, the paradox caused by the time travel rips the universe’s skin, forcing these two rival academies to put aside their differences and fight to save everything. If they are unsuccessful, nothing will be left in all of existence.

The main plot of this season is built on one particular coincidence that, if plucked at, could bring down the entire narrative. After their initial fallout with the Sparrow Academy, the Umbrellas take refuge in the Obsidian Hotel. Klaus had spent many years in this hotel and came to love it over the past decade. However, there was no reason explained for his connection to the place. This becomes more egregious with the revelation that the hotel conceals a gateway to another universe capable of saving reality.

How, out of all the possible dive locations for a junkie like Klaus to stay, does he choose the one with the key to human salvation? A throwaway line could have easily explained this. Still, the writers did not have the talent or wherewithal to notice that this would be an issue. Perhaps Klaus feels connected to the place because of his powers, and his drug-fueled highs there were better because of the gateway. Alternately, since Reginald Hargreeves owned the hotel, Klaus could have been introduced to it by Reginald and bonded with it as the one location where he felt like he was close to his father. However, this is not the case. There is no explanation why, out of an entire city, the one location where the Umbrellas decide to hide has the key to solving all their woes. 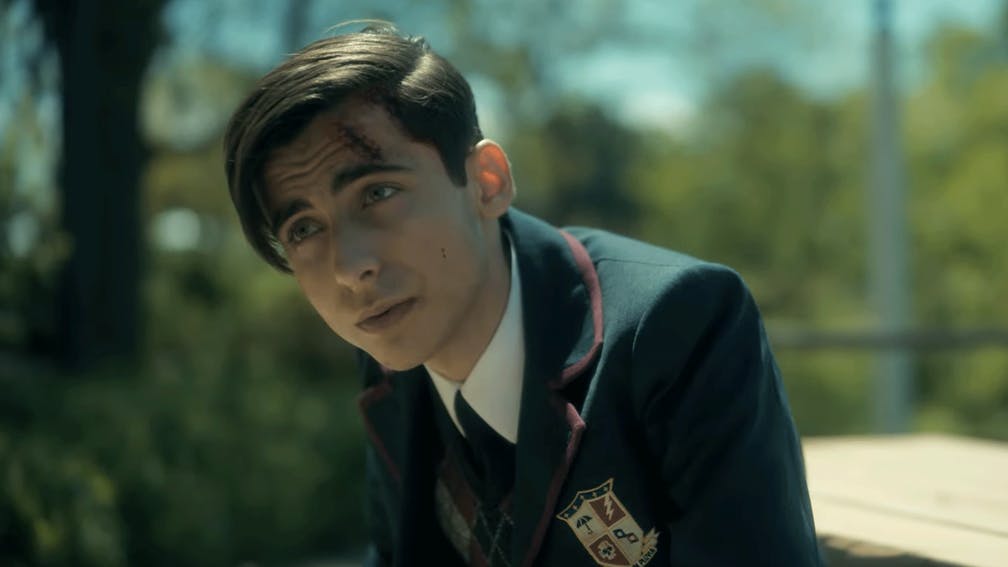 As with the prior seasons, Fives and Reginald are the best parts, their superior acting often redeeming subpar writing. Their performances are incredible and draw the audience in to create some of the best moments of this new season. The rest of the cast is about 50/ 50 depending on the material they’re given. There’s a lot of mediocrity from the rest of the cast and the writing. Klaus is a fun character but can get old rather quickly. Season 3 made the correct decision to downplay his role, only giving him to the audience in small doses. Luther is fine; his relationship with the Sparrow Sloan is the most significant thing he contributes to the plot. However, their relationship is rushed and somewhat stilted, not having the needed chemistry to truly sell their union.

Diego and Lila’s relationship, which takes up most of their screen time, is also fine. However, it contributes nothing to the emotional throughline of the narrative nor the plot. Their storyline also jump-ropes between meaningful and absurd rather rapidly. Lila’s involvement in the story begins with testing Diego to see if he will be a good father. Diego shows a surprising competence in the realm of fatherhood and blows away her expectations. However, he is still not allowed to be involved in any decision-making surrounding his child. It is a common trope in Hollywood that pregnant women should be allowed to go into combat, and the man being worried about it is a problem. This should not be the case, as the innocent child carried by the pregnant mother cannot consent to the violence being undertaken nor take the risk upon themselves. Making Diego the bad guy for wanting to protect an innocent who cannot consent is a significant misstep to which Hollywood often falls prey. 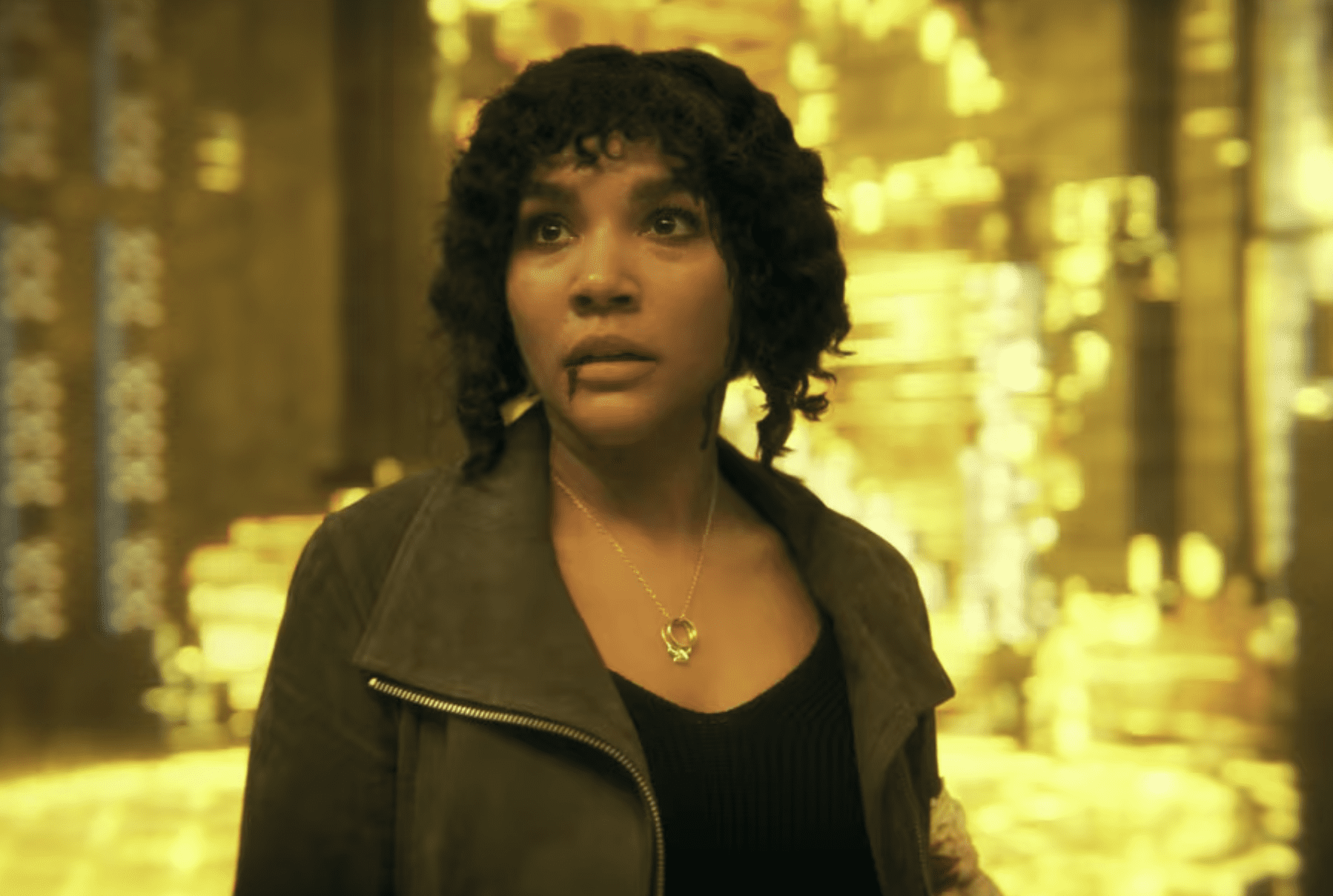 Similar to the pitfalls of Diego’s fatherhood complexities, Umbrella Academy again offers a degree of corrupt morality and misunderstanding of relationships with Allison. Allison toes the line of sanity throughout the season. She goes from “I’m so mad, I’m going to kill everyone,” to “Oh, I’m, like, the soulful saint and can’t do anything, like, wrong or stuff.” This inconsistency is another example of the audience getting whiplash from the contradictory writing that is neither set up nor paid off meaningfully. However, more important than her constant yo-yoing is the heinous decisions she makes. These choices are not condemned by the other characters or the writers.

Allison straight up uses her powers to attempt to rape Luther, and no one cares much. Like Wonder Woman 1984, this season’s writers show a complete lack of morality, blinded by modern-day feminist politics. According to them, it is no big deal if a woman rapes a man. Worse still, after her attempted rape, she gets angry at Luther for wanting to have sex with her. A woman cannot use her superpowers to force a man to have sex with her and then get mad when he wants to do it. At the end of the scene, Luther is made out to be the bad guy of the scenario. This is a complete breach of all things moral, upright, and just. The writers could have redeemed this scene by condemning Allison for her actions. However, that is not the case whatsoever. All the characters in this season have lost people they love or care about, but only Allison becomes a monster who murders and rapes indiscriminately without condemnation.

Additionally, the timeline is restored at the end of the season, and Allison gets her daughter back. Following in the footsteps of the writers’ approach to Diego’s lack of agency as a father, Allison is with her boyfriend from the 60s and not her daughter’s father, who had been raising her alone. It is implied that he was erased from existence, or at least from their daughter’s life. Their daughter was this man’s entire life, and he made correct decisions based on the health and wellbeing of his child. But the writers give no concern for his desires or wellbeing following the timeline repair. It’s all about Allison getting her child back and being with the man she loved from the 60s. Of the three fathers shown this season, one has no agency, another is disregarded, and the third is an overbearing monster who trained his children to go to their deaths. Inversely, the mothers are all saints who can do no wrong. This sounds like a double standard. 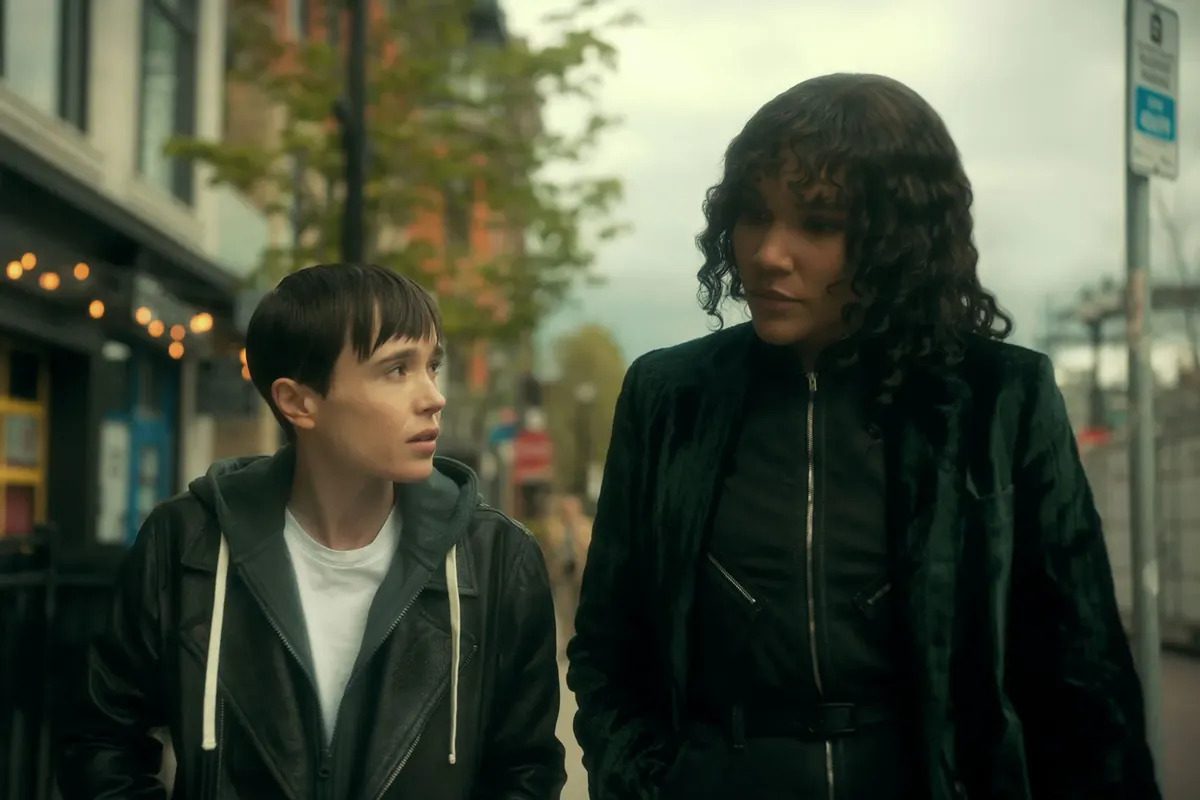 The elephant in the room, the Elliott Page situation, must be addressed. The writers had no choice but to include the real-life transition of Elliot from woman to man or risk a tirade of hate on Twitter and the potential of Elliott quitting the series. Saddled with this responsibility, the writers started out dealing with this tough situation rather well. . . for the first five minutes. Initially, Elliot’s character just gets a haircut and tells everyone to call him Viktor now. After this initial encounter, the others just accept it and move on, which is the best we could have asked for. That is when everything falls apart.

Viktor’s transition is brought up with every single character at least three times and constantly distracts from the overall plot of the scenes. The universe is about to implode; there are more important things to worry about than using the correct pronouns. This is hammered ad nauseam until the audience has no choice but to roll their eyes and moan, “OK, we get it.” Constantly referencing Viktor’s transition only gets worse, and more maddening. Luckily, by the finale, the plot is too large and expansive to allow the script to further detour into Viktor’s issues. The end of the universe is a welcome relief from the constant badgering of every single character. 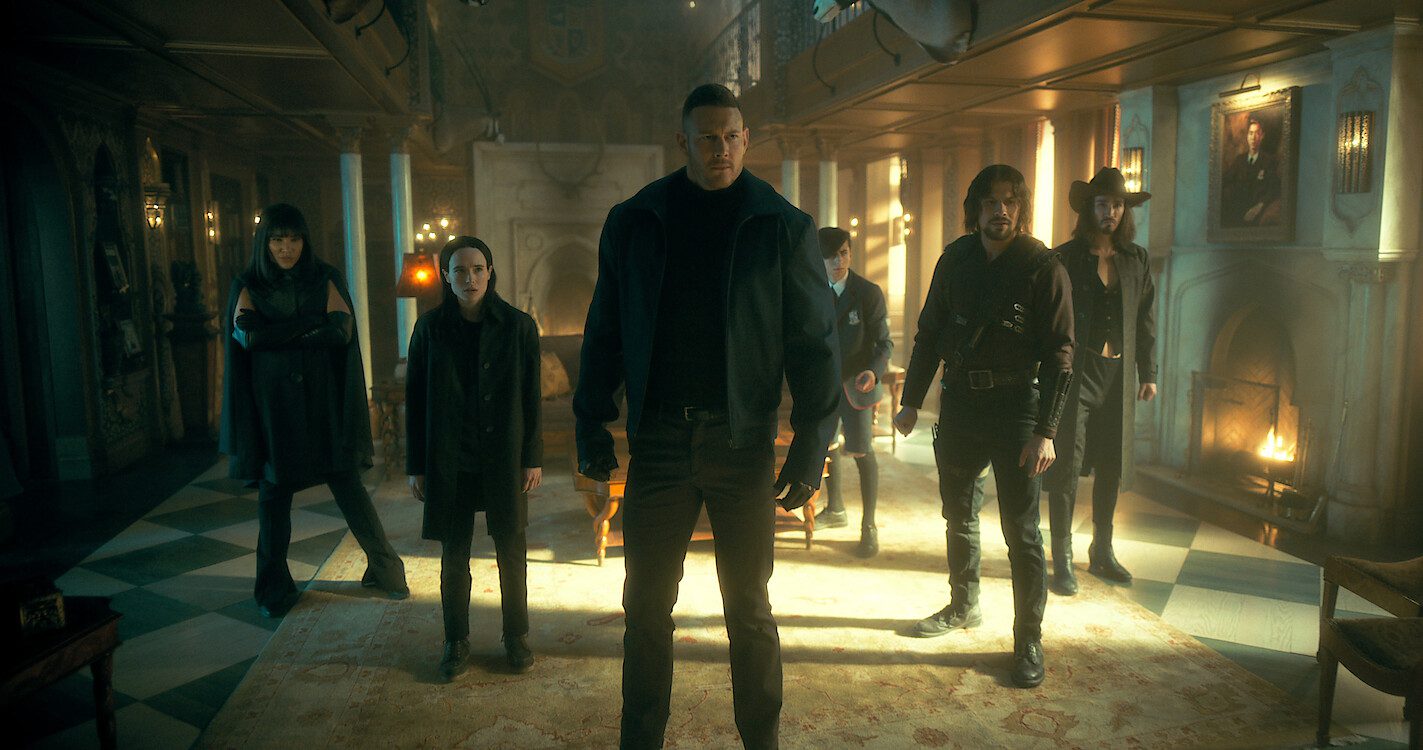 Umbrella Academy is always better when focusing on the main plot and the season’s bigger picture instead of the individual personal dilemmas of the characters. The more imminent the apocalypse, the better the writing. That is why the first and final episodes of seasons 2 and 3 are the best of their respective seasons. There’s not enough time to deal with their interpersonal drama, which is when the series’ best moments happen. The more bloated the personal stuff, the more the quality dips.

Overall, season 3 is roughly equivalent in quality to season 2, with similar excellent highs and abysmal lows. The show is schizophrenic, lashing back and forth from good to horrific. The end of this season could end The Umbrella Academy, as all the characters have everything they have ever wanted, and all their powers are gone. That would be an acceptable and fulfilling solution to the story threads of the prior seasons. However, Netflix will likely continue with a season 4, though it has not been announced yet. Nevertheless, if, for whatever reason, a season 4 is not greenlit, the ending of season 3 is fulfilling enough to satisfy fans and close the book on The Umbrella Academy.

Overall, season 3 is roughly equivalent in quality to season 2, with similar excellent highs and abysmal lows. The show is schizophrenic, lashing back and forth from good to horrific.