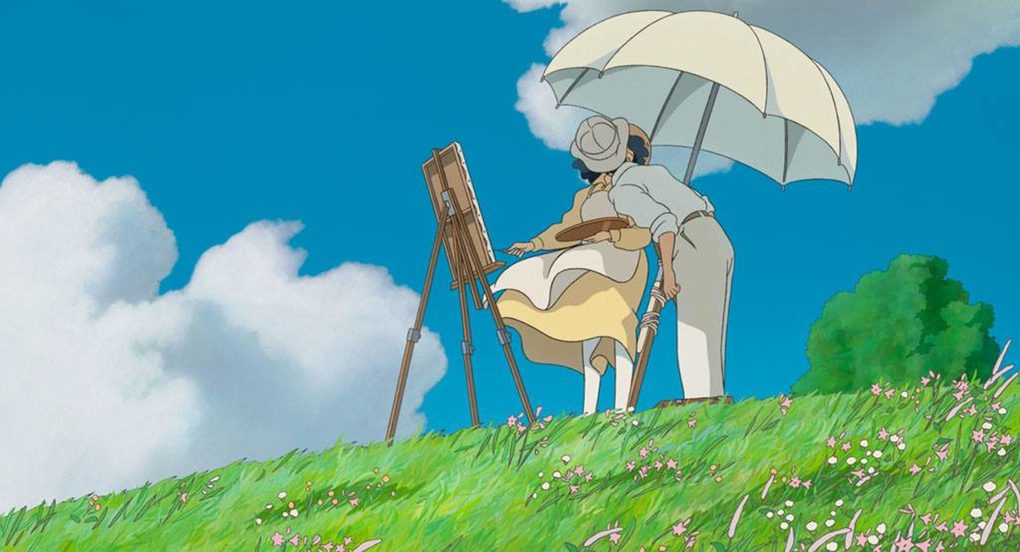 The Wind Rises is in the later batch of Studio Ghibli movies I never saw for one reason or another. I was always curious about this one because it’s actually based on a true story, that being the life of Jiro Horikoshi, engineer of the Mitsubishi A6M “Zero” fighter. The Wind Rises is also Hayao Miyazaki’s last feature film as of now, although he has one entitled How Do You Live? in the works. The Wind Rises follows a trend in Miyazaki’s work, a fascination with aviation both in realistic and fantastical terms. Studio Ghibli takes its name from the Caproni Ca.309, an Italian craft manufactured by Giovanni Battista Caproni. Caproni actually appears in Jiro’s dream sequences. Miyazaki also wrote a manga of the same name about the life of Jiro Horikoshi years before releasing this film. The movie incorporates elements of its story, such as Jiro’s wife Naoko and her ailment, from the 1937 novel The Wind Has Risen by Hori Tatsuo. Let’s take a look. 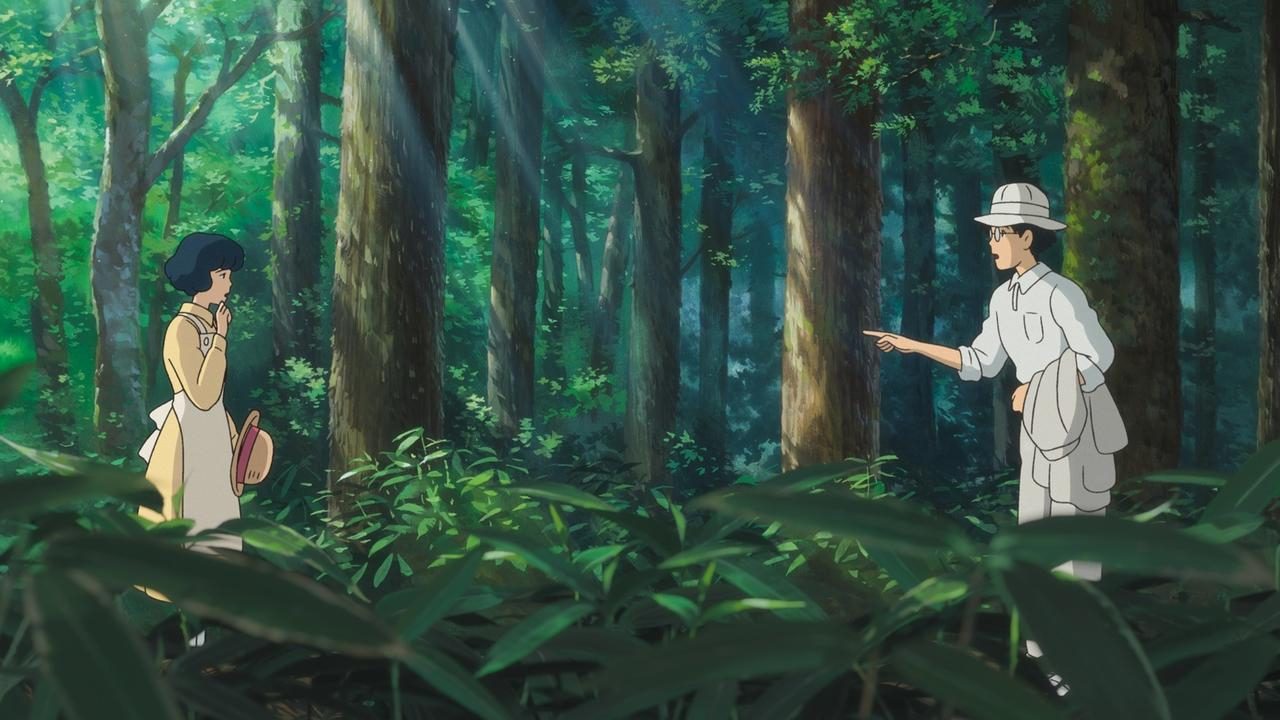 The Wind Rises follows Jiro Horikoshi from boyhood through his marriage and creation of the plane that almost won WWII. Throughout the film, Jiro struggles with balancing his personal life with the all-consuming art of airplane design. Even once he finds the love of his life, Jiro must evade the secret police while worrying about her poor health. Jiro lives out his dream of designing beautiful, functional aircraft, but at what cost?

This movie is enthralling. It isn’t to be seen so much as experienced, preferably in one sitting in a dark room. The Wind Rises has the visual spectacle you’d expect from Studio Ghibli and then some. The shot where airplanes soar across Jiro’s face is just breathtaking, and the Japanese countryside looks real. The plants look like you could reach through the screen and touch them, and the depiction of airplanes in this movie floored me time and again. I’m not even interested in aviation or aircraft, but it’s hard not to appreciate the painstaking precision and artistry required to put one together. The Wind Rises also takes its time in a way most animated movies don’t have the time or budget to accommodate. The slow realizations where Jiro stops to think or feel the wind, the dialogue-heavy design meetings, and the few silent moments with Naoko all work toward building an indescribable atmosphere. This movie has several scenes that are carried by their animation and music alone, and I love that. The audience is allowed to breathe and absorb the setting and characters in a way few movies permit. 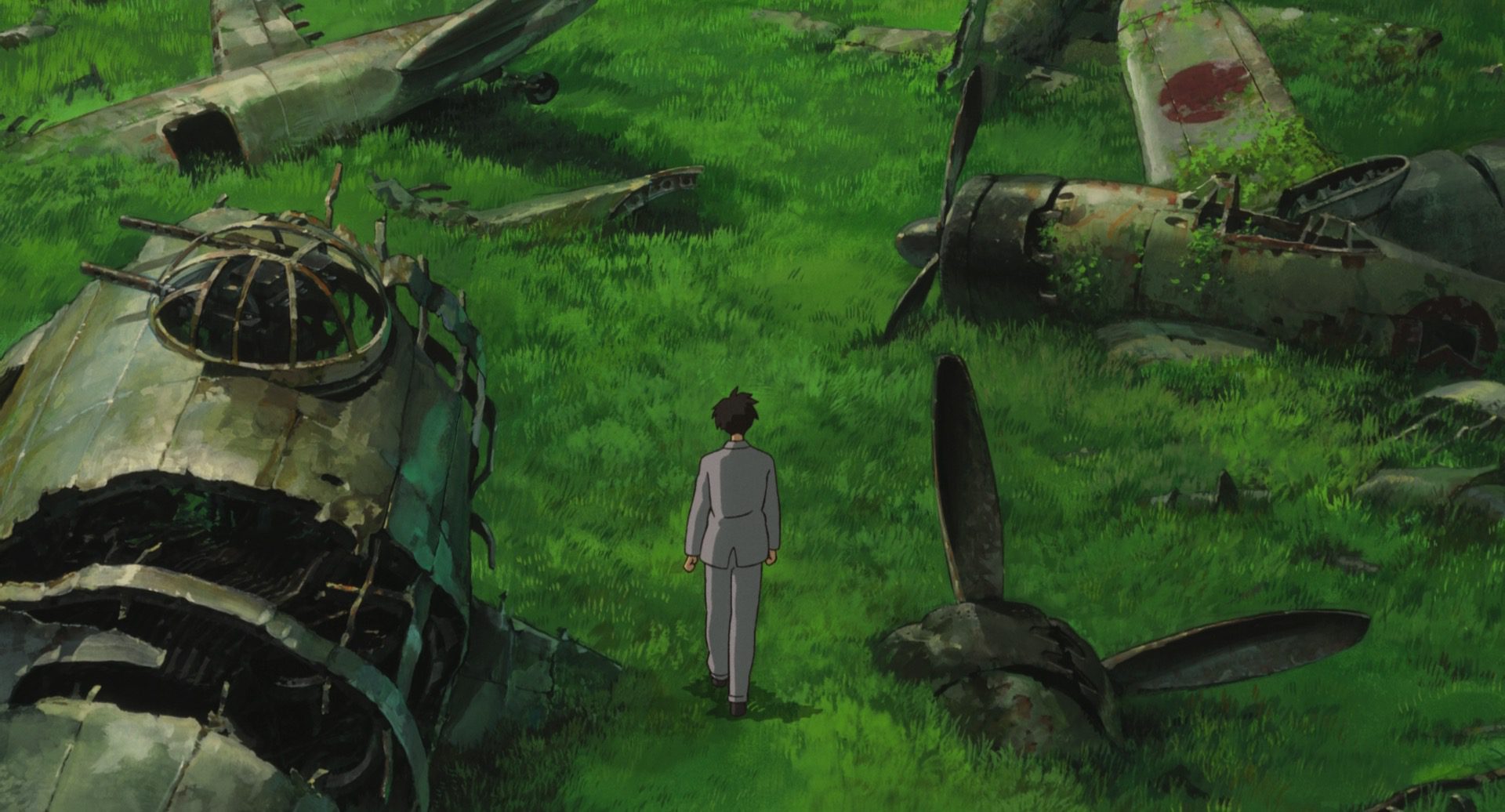 The Wind Rises also has a lot on its mind. I’ve heard criticism that the movie condones the atrocities committed by the Japanese military in WWII, but I don’t think that’s entirely fair. It also misses the point. This is one man’s perspective, and The Wind Rises doesn’t tell its audience how to feel about war one way or the other. At least in the movie, Jiro isn’t interested in the war itself or the ethics involved. He sees himself as insulated from all that, free to build planes to his heart’s content without a thought for the consequences. He even jokes about it, mentioning in a work meeting that they could remove the guns to make the planes light enough to fly the required distance. The Wind Rises isn’t condoning the war so much as it is viewing it from a perspective we don’t often hear. The scene with Castorp is telling; Castorp is a German man Jiro meets in the hotel where he also meets Naoko and her father. Castorp has a sour view of the Nazis and the Empire of Japan, seeing Hitler and his men as bullying animals. He goes on to say that Germany and Japan will “burn.” We later realize that Castorp is being hunted by the secret police, who search for Jiro in connection to him. Miyazaki’s films have historically been anti-war, and I find it strange to accuse a movie with such a nuanced view of the subject of endorsing violence. The Wind Rises is a work of art with a lot going on under the surface, and I think this will serve it well through the passage of time. 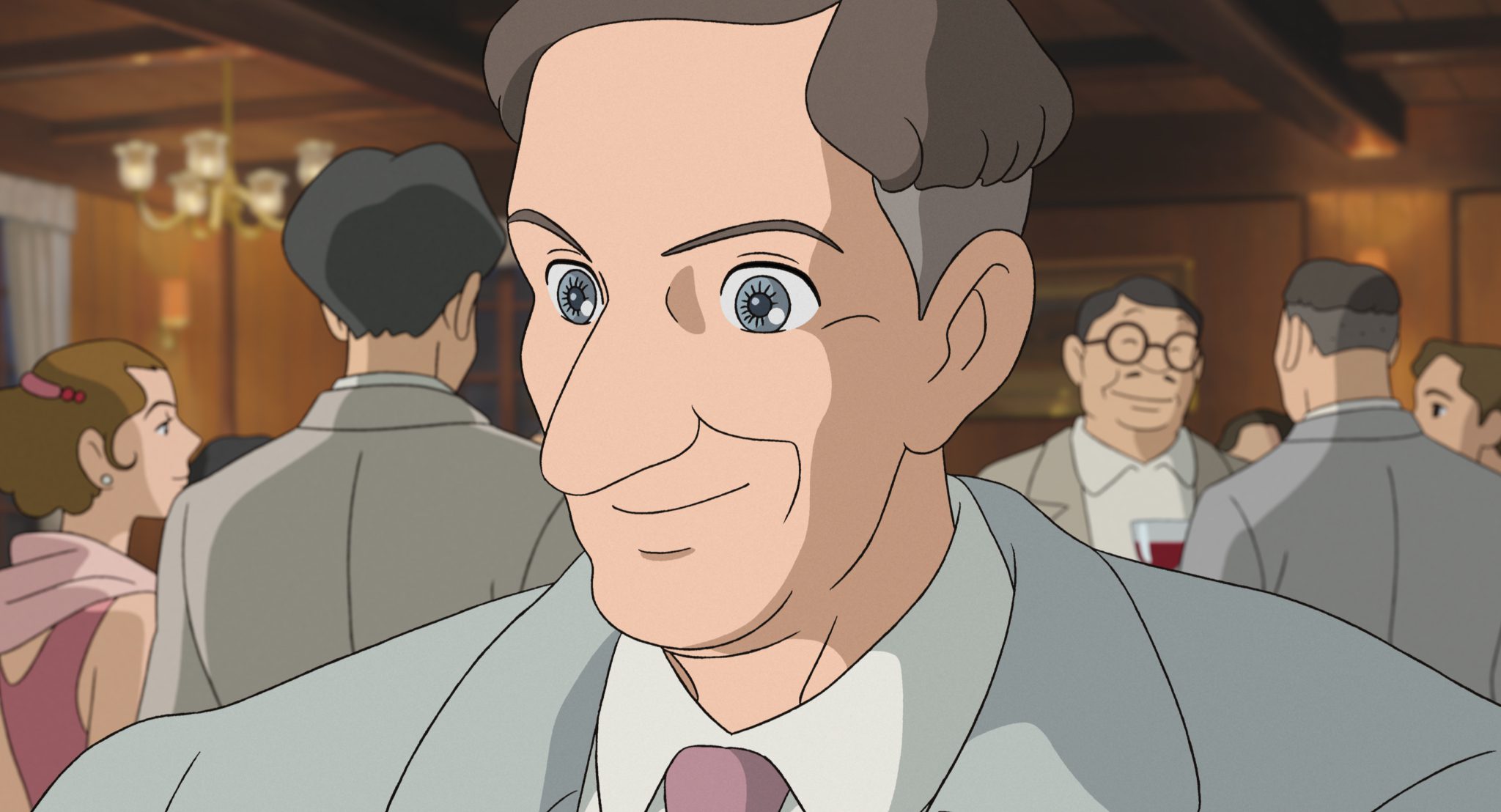 The English cast is delightful as always, and I plan to watch The Wind Rises with subtitles next time. Jiro is voiced by Joseph Gordon-Levitt, and I’m thrilled to hear him in another voice acting role. I loved him in Treasure Planet and have often wished he would do this type of work more often. Naoko and Jiro’s friend Honjô are voiced by real-life married couple Emily Blunt and John Krasinski. Martin Short is funny as Jiro’s short-tempered boss Mr. Kurokawa, and Mandy Patinkin serves as a calming presence as big boss Mr. Hattori. Mae Whitman (Avatar: The Last Airbender, the Tinker Bell movies) voices Jiro’s sassy little sister Kayo. Stanley Tucci, Werner Herzog, and William H. Macy round out the cast as Jiro’s idol Count Caproni, Castorp, and Naoko’s father, respectively. The film’s musical score by Joe Hisaishi again displays his tremendous talent. The Wind Rises‘ underscore has an Italian feel, which begins to make sense early on in the film. It’s lively and upbeat, even when what we’re seeing approaches the more heart-wrenching side of things. It actually reminded me of Pixar’s Up in this regard, another great movie with an iconic musical score. 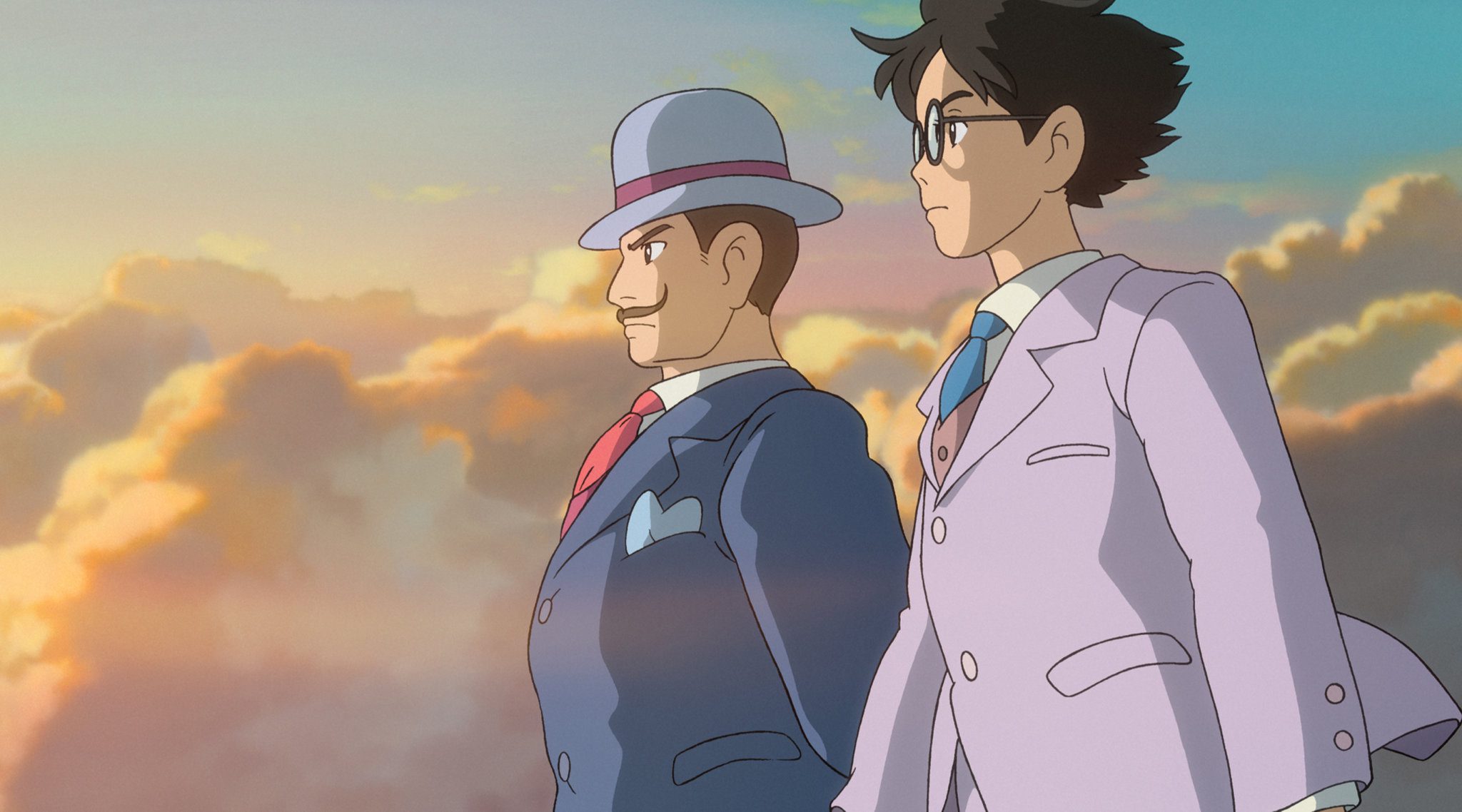 I can’t believe I waited eight years to see The Wind Rises, but it won’t be that long before I watch it again. The Wind Rises is yet another visual and aural feast from Studio Ghibli, but it’s also a thoughtful meditation on a man’s life and work. I didn’t go into The Wind Rises thinking about Jiro’s love story with Naoko, but it’s one of the film’s most striking aspects. Much like his job, Jiro’s marriage is a dream come true that turns into a tragedy, leaving him with only his thoughts and the wind.

The Wind Rises is beautiful both visually and in its exploration of a man's life lived on his own terms.