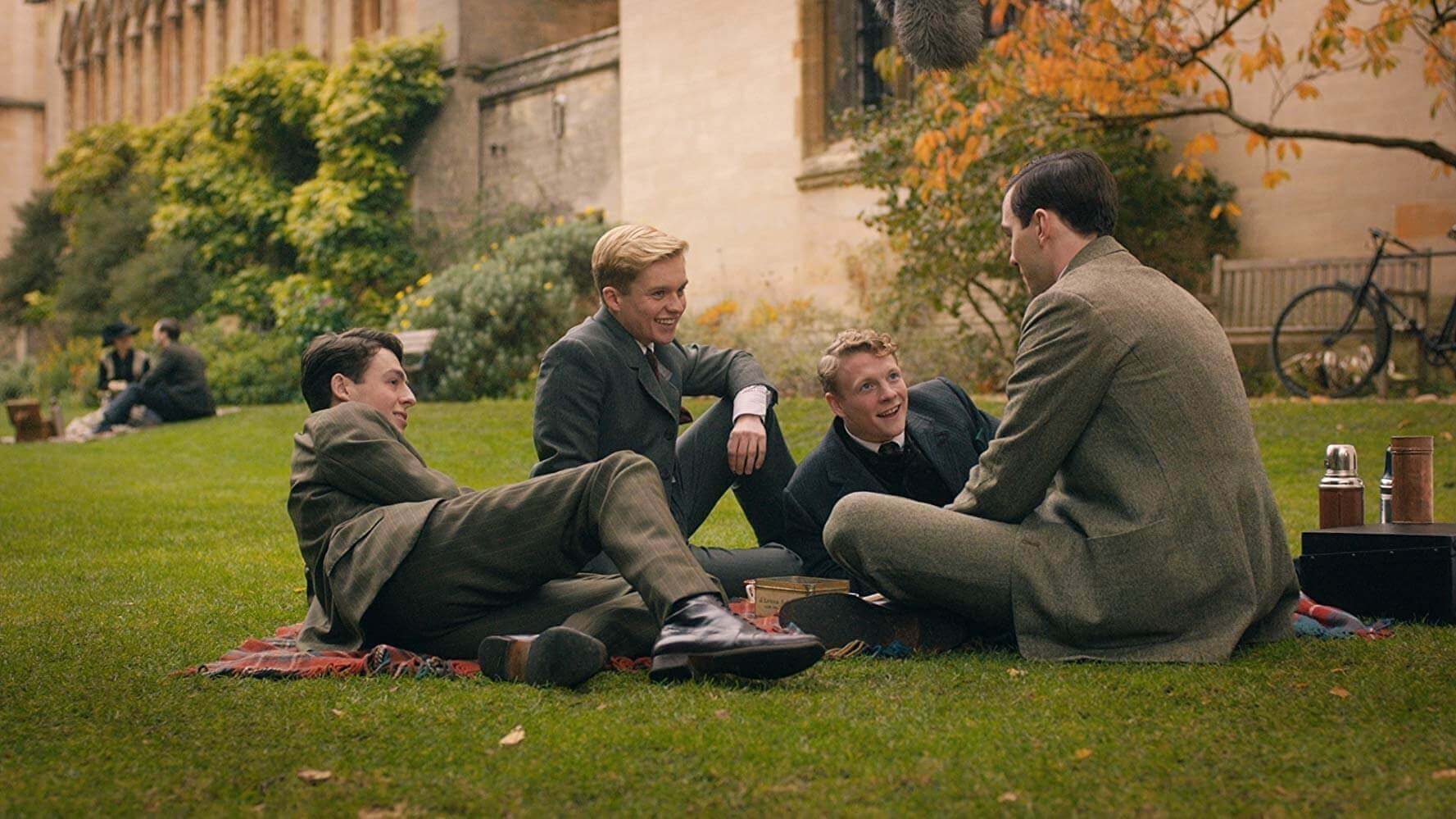 When I first heard that a biopic was being done for J.R.R. Tolkien, it occurred to me that it seems strange how they hadn’t already made one. After all, biographies never seem to go out of style, and he is the father of modern fantasy as we know it. That being said, Tolkien’s estate protects his name and properties like hawks and have even voiced concerns with this film, so perhaps that’s why it took his story so long to reach cinemas. Tolkien tells the story of the author’s (Nicholas Hoult) early years, from the death of his parents through college, World War I, and his marriage to Edith Bratt (Lily Collins). Tolkien’s love for language, some of the inspiration behind his writing, and his relationships with schoolmates are explored.

The acting in Tolkien is rarely amazing, but it’s not bad, either. Hoult delivers an understated performance as the titular youth, and he really gets to shine when talking about philology and his stories. Lily Collins is a good actress, and her rendition of Edith Bratt is pretty good, even if she rarely gets the chance to shine. Albie Marber, Ty Tennant, and Adam Bergman play Tolkien’s young schoolmates Robert Gilson, Christopher Wiseman, and Geoffrey Smith, respectively, while their adult counterparts are portrayed by Patrick Gibson, Anthony Boyle, and Tom Glynn-Carney. At least within the film, Gilson is the most interesting of the young man’s friends, being the son of their headmaster and suffering under his father’s high expectations. Colm Meaney plays Father Francis, a Catholic Priest who keeps an eye on Tolkien once his father, and eventually his mother, have died. He does an excellent job at making this relatively minor character stern, yet caring and sympathetic. Laura Donnelly plays Tolkien’s mother, and she does a fine job, but she just isn’t in the film much. She reads J.R.R. and his little brother Hilary a story, the legend of Sigurd, and then she gets sick and dies. I understand that the movie isn’t about her, but she dies before we have a chance to grow attached to her or the two boys, so her death carries little weight in the narrative. It’s also strange what a non-entity Hilary is; being that he is J.R.R.’s only surviving family member, you’d think they would have some kind of a familial bond. The two share a room, but barely speak or interact. Derek Jacobi emerges later in the film as Tolkien’s philology professor and mentor, and he’s delightful; he challenges Tolkien to work harder and pursue his true passion.

The central relationships in Tolkien are those with his three best friends and his romantic pursuit of Ms. Bratt. As these characters get more attention than Tolkien’s biological family, their representations and connections to him are stronger. I still feel like we could have learned more about Edith, and I don’t like how J.R.R. in one scene goes from a preteen with an unrequited crush to a college-age man who seems to have won the lady’s affections. What happened in-between? What did they discuss? How did she come to know him and fall for him? I understand that this is a film about his inspiration for his writing, but it feels like they offer enough to make us curious about aspects of his life without telling a complete story. Tolkien’s schoolmates and their club, TCBS (Tea Club, Barrovian Society), fare better. As I had mentioned, Gilson is the most interesting of the three, but we also learn that Wiseman composed music and Smith wrote poetry. The four companions share serious moments within the film, as well as comedic ones; they goof off and get kicked out of bars, they share their problems, they flirt with girls, they help one another through struggles. This is one reason that the scenes with the four friends are among the best in the film. Some of Tolkien’s friends die in the War, and this tragic loss contributed to themes and ideas within Tolkien’s works.

One thing I found troubling about this film is that some of the story threads and themes never really connect. One exception is the theme of fellowship; it’s very clear how Tolkien’s experiences of making friends and bonding with them inspired his writing, and he even says as much in one scene. However, in the end credits, it relays facts about the man and his writing, one of them being that his and Edith’s headstones are marked “Beren and Luthien,” the names of a human man and an Elvish princess who fall in love in The Silmarillion. For people who already know these things (and maybe even for those who don’t), simply stating fun facts at the end of the film isn’t enough. The story we’re presented with never really connects with Tolkien’s writing (again, excluding his classmates and his oft-explored theme of friendship) and the problem with that is that the film was marketed as exploring the influences on his work. Some aspects of Tolkien’s books go unacknowledged entirely, arguably the more interesting ones, such as the evil of technology and the human desire for power. It’s difficult to fault the filmmakers entirely for this one; I think this is likely a case where they had to tiptoe around anything that might prompt Tolkien’s estate and his son Christopher to sue. It’s a shame, though, and it does take a lot of energy away from Tolkien; in its current state, it feels unfocused. It’s very possible to tell a story where Tolkien makes friends, falls in love, finds his passion, and goes to war. However, you have to connect all of these things to one another and, to some larger theme – ideally, in this case, how these occurrences are reflected in his work.

Tolkien’s musical score, provided by Thomas Newman, is understated but beautiful. The costumes are absolutely exquisite, especially those for Lily Collins’ Edith. The cinematography is pleasant, especially shots of the English countryside. This stands in stark contrast to the dingy grayness of the war scenes. The editing goes without notice, which means it is done competently but unremarkably. And that actually applies to a lot of this movie. Overall, Tolkien is enjoyable, but it never really comes together in the end. It’s a biography, so I don’t have any big issues with the story itself, and the acting is mostly good. However, it feels like the movie never really does what it set out to do. As such, it seems aimless and meandering to the viewer.

Tolkien is enjoyable, but it never really comes together in the end. It’s a biography, so I don’t have any big issues with the story itself, and the acting is mostly good. However, it feels like the movie never really does what it set out to do. As such, it seems aimless and meandering to the viewer.