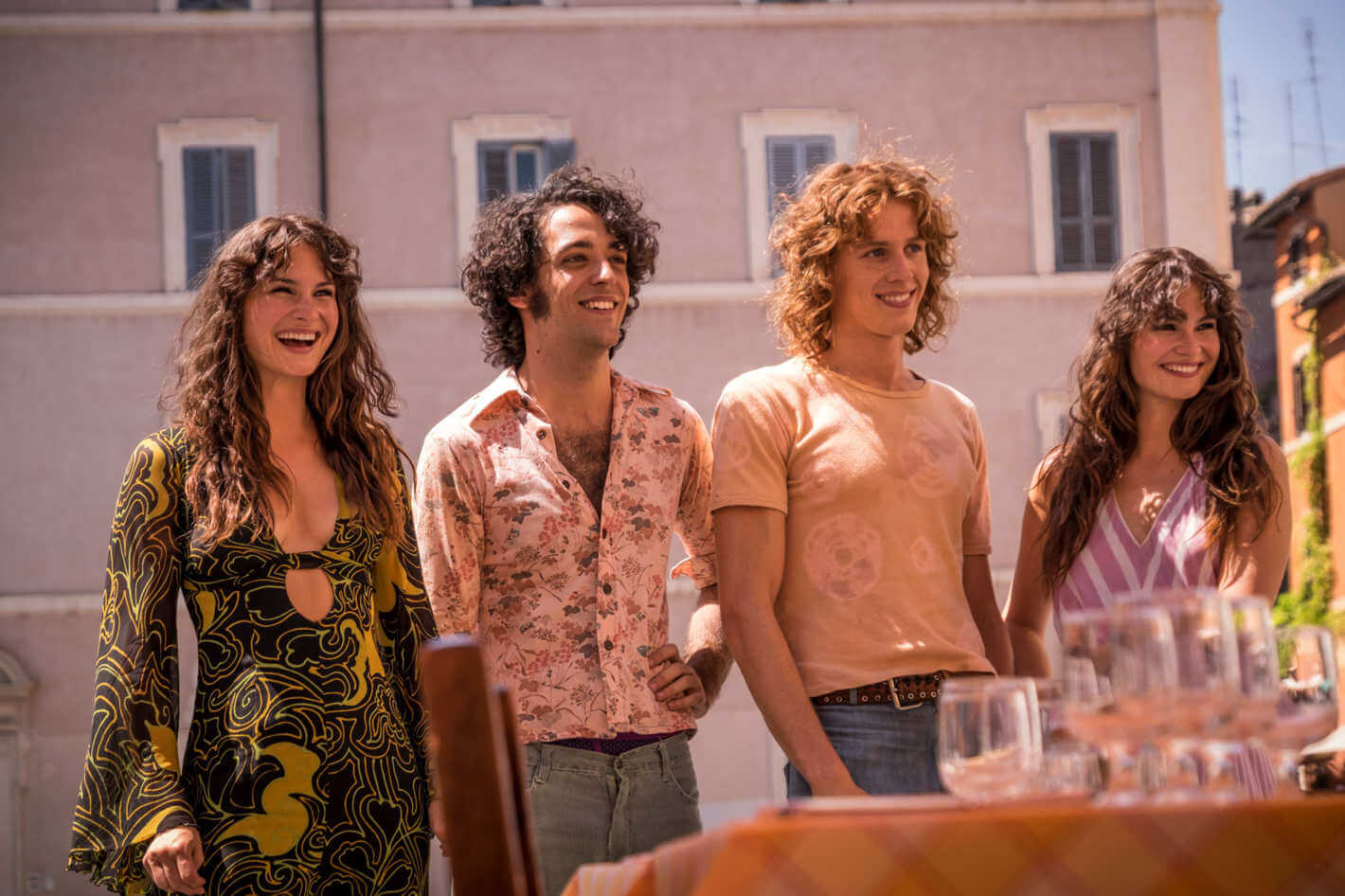 This week’s episode of Trust, “La Dulce Vita,” opens with Paul Getty III and his friends partying and doing drugs. In the streets people are rioting and all appears to be chaos. Meanwhile, a man named Primo is burgling the home of an elderly couple; at first he’s just going to take the valuables and leave, but his partner calls him by name so Primo kills him and the couple. The whole episode’s story is told in retrospect and out of order, and everything we see is a flashback while Paul is locked in a trunk with two dead bodies. Paul discovers that his friends have been borrowing money in his name to the tune of $6,000 and Berto the restaurant owner tells him he has one week to get the money. Paul goes to his mother, who can only give him enough to fly to England, and we already know how things went with his grandfather.

Paul comes up with a scheme to have Berto kidnap him and demand the money from his grandfather as ransom. Paul’s girlfriend Martina and her sister Jutta help him write the ransom note, leaving out the ransom amount. Berto keeps Paul in a run-down house with a bucket for a toilet. At first it seems OK, if not ideal, and Paul keeps them entertained with hand shadows and play-acting. However, things get messy when Paul starts suffering withdrawals and demanding cocaine. He escapes and runs across the rooftops of Rome, eventually ending up in a local nightclub. Berto reveals his true intentions, puts Paul in a trunk and trades him to another kidnapper who isn’t so hospitable: Primo. You can read my review of episodes 1 and 2 here.

This episode shocked me, after the end of episode 2 heavily implied that Paul had been kidnapped against his will. They must have been showing him in Primo’s custody. “La Dolce Vita” was a little hard to follow at times, because they flipped from Paul in the trunk to various flashbacks out of order. This one was also possibly made less interesting by the absence of Donald Sutherland as J. Paul Getty Sr.

Hilary Swank only appears briefly as Gail, but it’s one of the best scenes in the episode, and in it, we’re given a lot of information. When push comes to shove, Paul isn’t really too good for his family like he thinks he is. Gail is a sucker for her son, and gives him money she can’t really afford to lose. Paul’s father is not only absent in his children’s lives, but hasn’t been paying his child support. Gail’s boyfriend Lang Jeffries not only has a contentious relationship with Paul, but the two can’t be in a room together without hurling insults back and forth. I also liked the relationship between Paul and his siblings.

Berto’s behavior is despicable, and one wonders why he let these kids borrow so much before demanding to be paid. Everyone involved is just stupid; Paul for letting his friends capitalize on his name, them for thinking he had the money, and Berto for involving someone like Primo. It almost feels like the show’s goal is to make it impossible to sympathize with anyone. If so, bravo.

There were also scenes in this episode that seemed over-the-top. In the opening when Martina and Jutta make out, it just reeks of shock value. We get it; they’re on drugs. You showed them doing lines of cocaine. More and more, TV is just using shocking ideas/images to get a rise out of the audience rather than to enhance the story. There are also two instances of Primo shooting people in the head; first the elderly couple and then Berto. Rather than panning wide or cutting away, they show you pieces of meat flying out of the victims’ heads. It just feels tasteless. And I think they missed an opportunity to save this shock for when Paul is inevitably mutilated to send his ear to the Gettys. I assume they did all this to show the effects cocaine is having on the kids and what a sadistic piece of trash Primo is, but I think it was unnecessary. Sometimes the most shocking thing is what you don’t see.

This episode isn’t as visually interesting as the previous two by virtue of Paul being held in a trunk and a nasty house. The musical score is nice but got more of a chance to shine in the first two episodes. One thing that stood out to me was the song choice in the previous episodes, and here it just isn’t as good. The acting is still great, but in showing Paul’s flashbacks they don’t get much opportunity to feature the other family members, meaning the bulk of the main cast is short-changed. The purpose of this episode is to show how Paul got here and some of the seedier aspects of his personal life. We also get to know more about his friends. There’s a lot of good in this episode but it’s more boring and confusing than the others

Overall I enjoyed “La Dolce Vita,” but I’d say it’s my least favorite episode yet. The timeline gets a little confusing, most of the cast introduced in the previous episodes are absent, the music choices aren’t as memorable and at times it feels a little gratuitous. Do we need to see chunks flying out of people’s heads, or Martina making out with her twin sister? I’m not a prude but I just don’t see how this enhances the story. “La Dolce Vita” shows what led up to Paul’s present situation, and now that it’s over I look forward to more scenes with Donald Sutherland, Hilary Swank and Brendan Fraser.