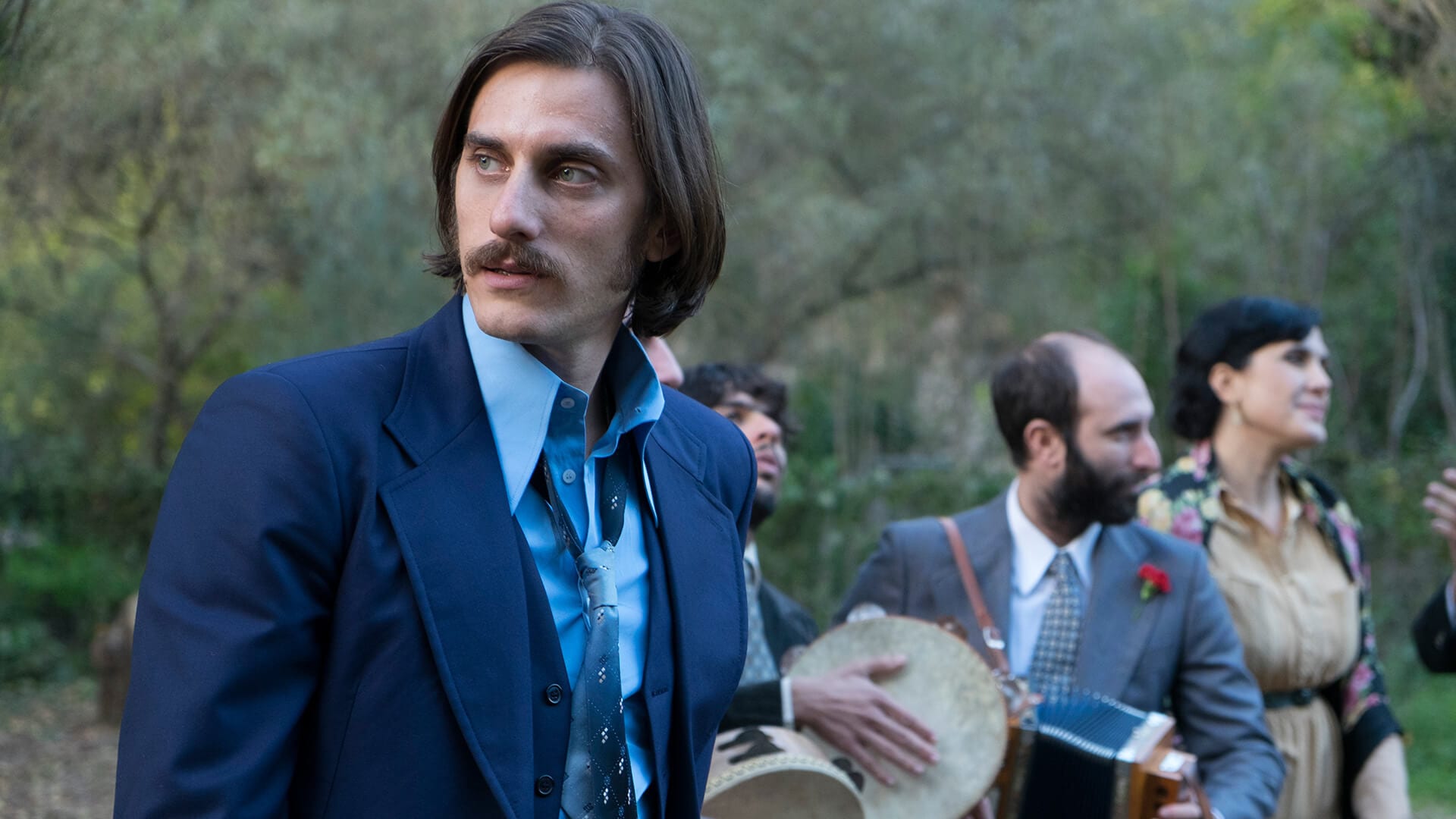 On this week’s episode of Trust, “In the Name of the Father,” Primo’s family lawyer Leonardo teaches his own son Francesco how to kill a goat in a flashback. Presently, the whole kidnapping family is scrambling to decide what to do now that the Gettys have canceled their offer for the ransom. They hide Paul in a cave and rush back for Francesco’s confirmation.  Primo’s uncle asks if the ransom went well and Leonardo insists that all has gone according to plan. At the reception, Leonardo says Francesco must leave and go to college. But Primo’s uncle gifts him with a knife and says it’s time for him to join the community. Angelo’s grandmother shows up demanding to know where he is, and Leonardo’s wife is forced to tell her that he was the burned body found earlier. One of the cousins lets slip that Paul was never ransomed and Primo’s uncle is enraged.

Meanwhile, Francesco finds Paul in the cave and brings him to a water trough to drink. Paul is resigned to being killed by Primo’s family, but asks if they’ll do it outside the cave surrounded by nature’s beauty. Primo’s uncle decides to kill Paul himself, so Francesco tries to release him. Paul refuses to run, saying that there’s nowhere to go. He has Francesco cut his ear off to send to his family, to convince them to pay.

Primo’s family is seriously messed up. Every member seems to be a sociopath, and they see this kind of situation as being totally normal. They talk about the kidnapping like any other business deal, feel no apparent sympathy for Angelo’s grandmother and have no qualms about killing Paul if necessary. In the sick reality they live in, Francesco removing Paul’s ear is an act of mercy committed to spare him a worse fate. In fact, I think the show is drawing a subtle parallel between the wealthy Gettys and the poor Italians. On the surface, they seem like opposites, but in the end, both see people as business opportunities and are all but incapable of empathy. Although we never see Getty Sr. in this episode, I thought about him a lot. He wouldn’t directly kidnap or murder like Primo and his kin, but he also isn’t willing to pay them to spare his own grandson. The instant he realized he wasn’t going to make a profit, or just break even, he reneged on his own offer. It’s interesting that “In the Name of the Father” chose to focus entirely on the kidnappers. 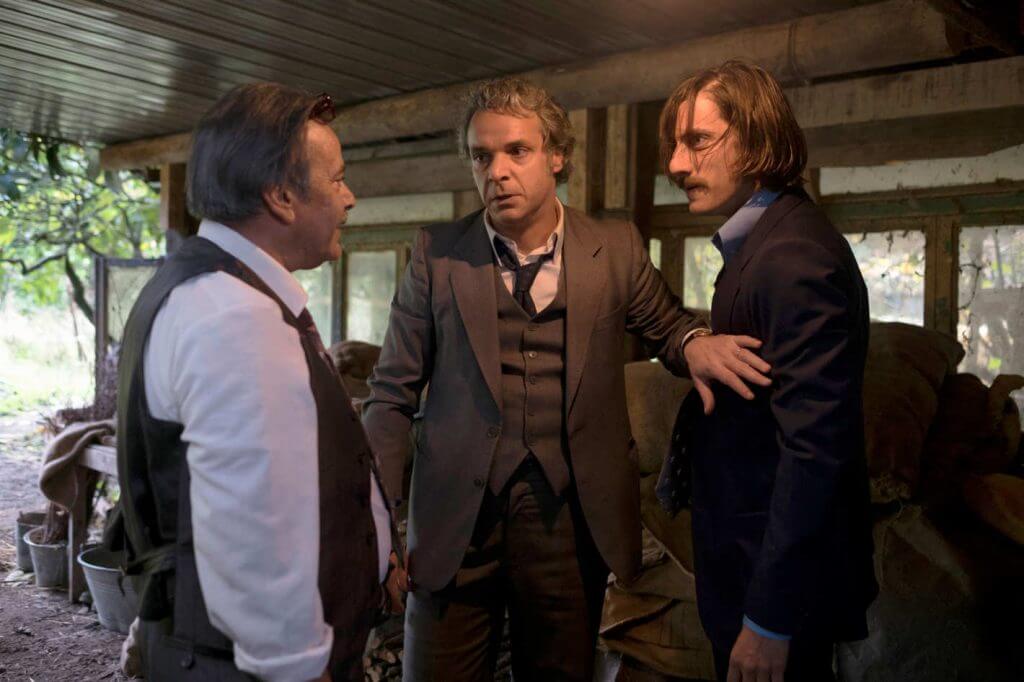 This week we learn more about the kidnappers as a family, their place in the village, and we get to see them in church. This part interested me; the family is (of course) Roman Catholic and observes all the traditions and events, but they absolutely think it’s okay — and even a good idea — to kidnap Paul and treat him so brutally. There often tends to be a disconnect between people’s alleged beliefs and their behavior, and I really like to see that explored in media. Primo’s family doesn’t stop at kidnapping and extorting strangers, either. They’re willing to lie to, threaten and kill members of their own village. They murdered Angelo and the only one with the guts to tell his grandmother the truth is Leonardo’s wife, who had nothing to do with any of it in the first place. She tells her that they shouldn’t have involved her grandson, or any boy, in this business, but that they’re men who just act without thinking. Naturally, this does nothing to comfort the grieving woman.

Trust is finally entering the home stretch and I can’t wait to see the look on Getty Sr.’s face when Paul’s ear arrives in the mail. One wonders if this is when Chase will take Gail’s side and insist that his boss do the right thing and pay the ransom. It must have been a difficult decision for Paul to have Francesco cut his ear off, and you can see the anguish on his face when it’s being done. This is very different from the movie All the Money in the World, where Paul doesn’t know what they’re doing at first and then violently resists.

I missed the main players this week, but that doesn’t mean “In the Name of the Father” is a bad episode. The music, acting, dialogue and sets are all very well put together. Nonetheless, I can’t help feeling that, with few exceptions, the most interesting stories, even interconnected episodes of a series, alternate between a couple of subplots. Showing multiple points of view creates a more dynamic story and a more engaging viewing experience. There’s a lot of good stuff here, but at times I just found myself wondering what was going on at Sutton Place or with Gail and Chase. All things considered, I wouldn’t call this one of the best episodes of Trust,  but I wouldn’t call it one of the worst either. “In the Name of the Father,” as usual, is technically impressive and the actors are all good, but some variety might have been nice. The only locations in this episode are the cave Paul is hidden in and the Italian village, and the whole story revolves around Primo’s family members, none of whom are likable or even sympathetic. Where the presence of Gail and Chase would normally offer some reminder that there are decent human beings out there, this episode is all gloom and doom.

Taken as a whole, “In the Name of the Father” is a good episode, but while a show like Westworld makes due without its most beloved characters for an episode or two, that absence sticks out more in Trust. None of the three top-billed actors are present, and while Primo’s family is compelling, they’re not likable and their motivations boil down to greed. Getty Sr. is guilty of many of the same faults, but Donald Sutherland just brings an undeniable charisma to the role that none of these men seem to have. The best scenes are the flashback with Leonardo and Francesco, and the interactions between Paul and Francesco. The one light spot in this family seems to be Francesco, who is still capable of basic human empathy, at least for now. But I did enjoy “In the Name of the Father” more than not, and I anticipate the final two episodes and seeing a lot more of Getty Sr., Gail and Chase.

Trust, "In the Name of the Father"

All things considered, I wouldn’t call this one of the best episodes of Trust, but I wouldn’t call it one of the worst either. “In the Name of the Father,” as usual, is technically impressive and the actors are all good, but some variety might have been nice. The only locations in this episode are the cave Paul is hidden in and the Italian village, and the whole story revolves around Primo’s family members, none of whom are likable or even sympathetic. Where the presence of Gail and Chase would normally offer some reminder that there are decent human beings out there, this episode is all gloom and doom.