No dream is too big, and no dreamer... too small. 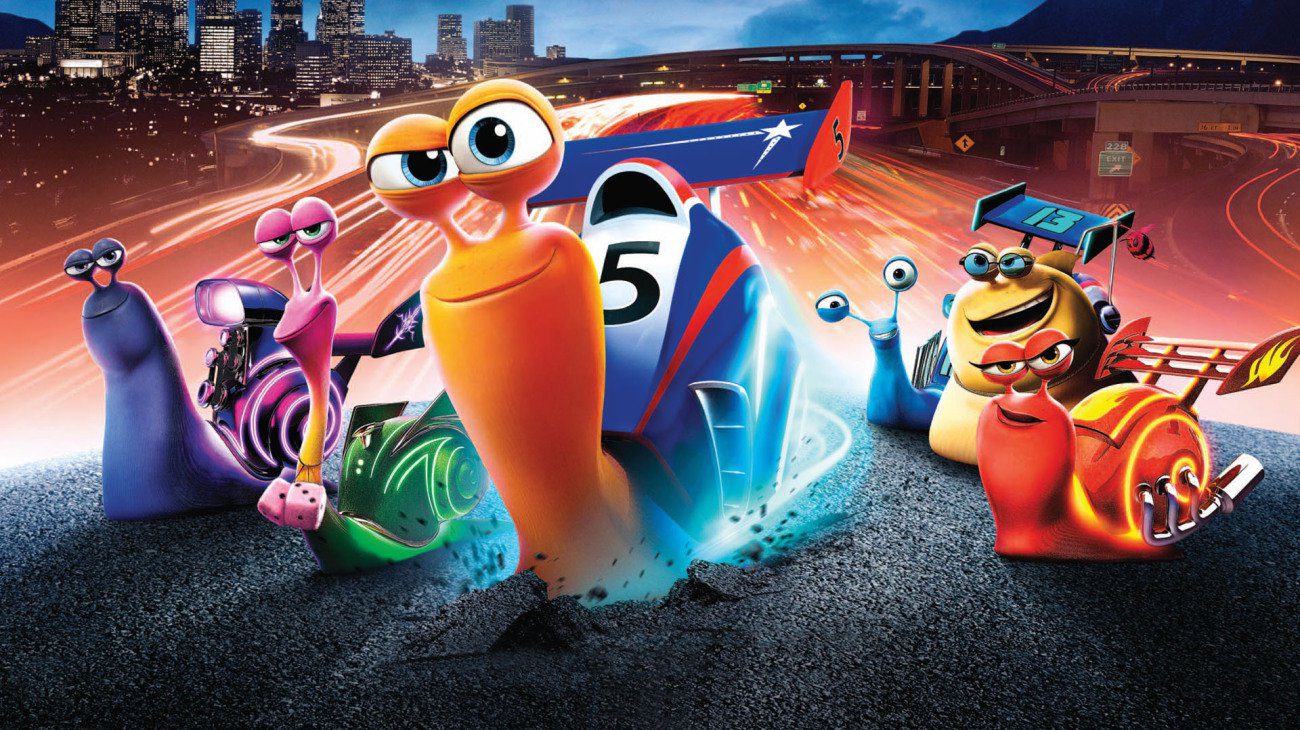 Released in July of 2013, Turbo is the story of a garden snail who wants to be a racer. Not just any racer, though; Theo (Ryan Reynolds) dreams of racing in the Indy 500 like his hero Guy Gagné (Bill Hader). However, Theo works a dull day job with his brother and boss Chet (Paul Giamatti), who is always trying to get Theo’s head out of the clouds. However, one of Theo’s attempts to exhibit his speed goes too far and gets him and Chet fired. When an accident imbues Theo with the super speed he’s always wanted, and he comes into contact with an unlikely benefactor, he gets his shot at the big leagues. Turbo is a rare opportunity for me because I almost always see American animated movies as soon as they’re available. I don’t necessarily prefer stuff from here, but it’s very accessible, and these days anything from the major animation studios is a must-see for me. I remember the marketing and toys released for Turbo, but for one reason or another, I didn’t get around to seeing it until now. The opening of Turbo has a very Cars feel to it. While I didn’t expect this going in, I guess it makes sense given what the movie is about… sort of. Turbo is a mishmash of influences and age-old tropes, but it quickly reminded me of Ratatouille and Antz as well. If nothing else, the film’s bizarre premise and host of possible influences make it unique. But is it unique like the legendary dumpster fire known as Shark Tale or the genuine artistic expression of Kung Fu Panda?

My first thought of Turbo was that the concept of a racing snail was too ridiculous to get past. But the movie could play it for laughs, or if it’s earnest enough in its execution, maybe it wouldn’t matter that much in the end. Alas, no such luck was had on either count. Turbo is one of the strangest films I’ve ever seen, and while sometimes that works for me, I have to admit I’m stumped here. Part of me can’t believe this story made it to theater screens. The other part of me remembers that this is the studio behind Bee Movie; if DreamWorks would romantically pair a human woman with an insect, where would they not go? Nothing is sacred to the people who made their reputation by taking a dump on the work of other artists. I’m not saying Turbo is the worst animated movie I’ve seen or even the worst one from DreamWorks. But the sheer level of artistic mediocrity paired with such an outlandish sequence of events definitely distinguishes Turbo in less than favorable ways.

Before we get into it, Turbo has a surprisingly good cast. Ryan Reynolds’ delivery as Theo/Turbo is solid. It’s kind of strange that he starred in two DreamWorks animated films back-to-back in the same year, but he’s much better here than he was as The Croods’ Guy. Paul Giamatti is always excellent, and this is no exception, regardless of the quality of the material he’s given to work with. Samuel L. Jackson, Bill Hader, Michael Peña, Ken Jeong, Michelle Rodriguez, Richard Jenkins, Snoop Dogg, and more round out the supporting cast. Bill Hader’s voice is unrecognizable as Guy, and he shifts from smooth and charming to threatening with easy conviction. This cast is absolutely wasted on the movie’s absurd-in-a-bad-way premise and flat characters, but nobody can say they didn’t try. 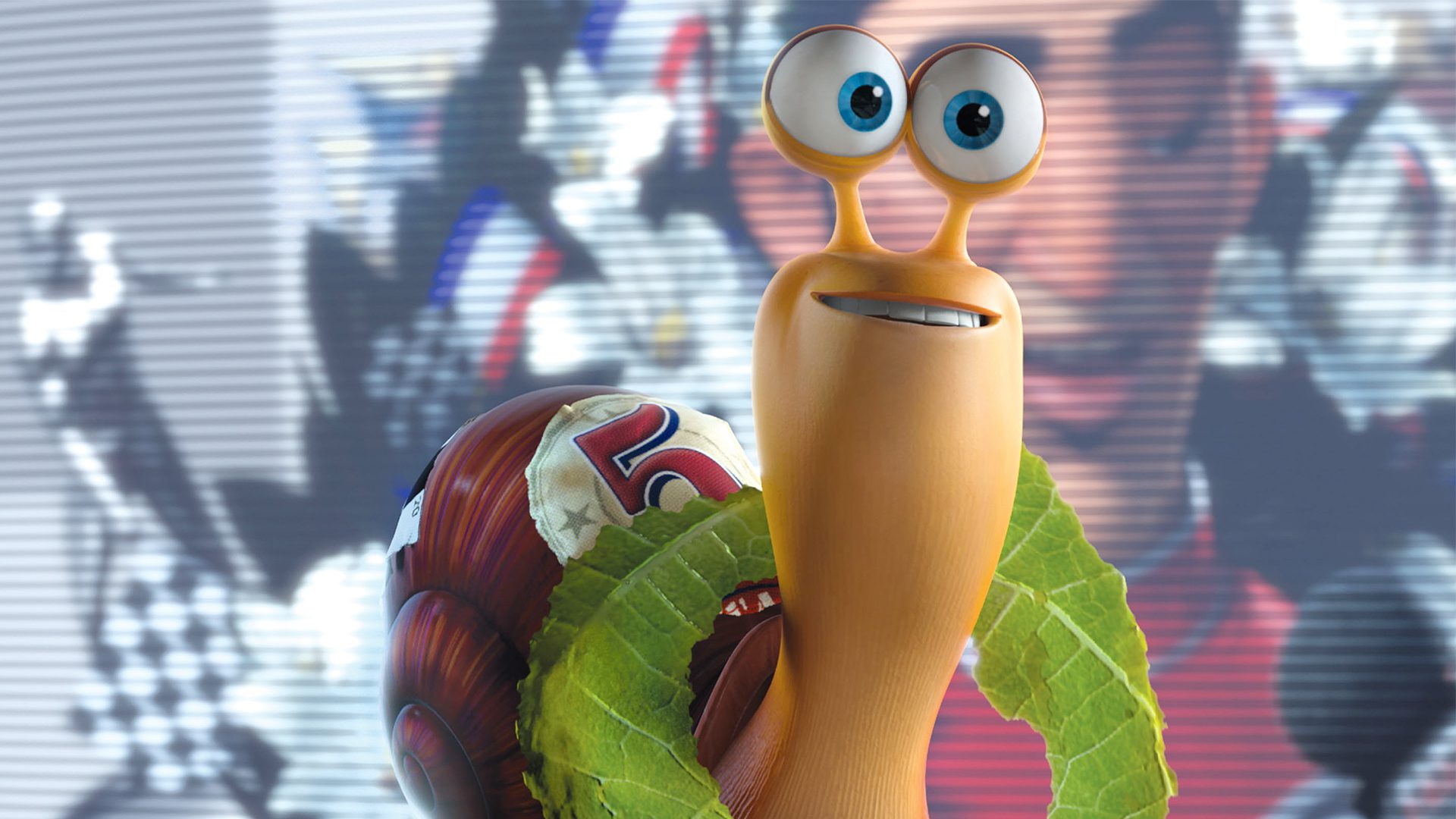 My biggest problem with Turbo is the characters and their relationships. Specifically, they’re all boring, predictable, and static. Turbo has the heart of a racer and just needs to believe in himself (and get sucked into a car engine, absorb electricity, gain the ability to play FM radio from his mouth… you know, the usual.) Chet seems like a hardass who wants to crush his brother’s dreams, but he really just cares about Theo’s wellbeing and wants him to be safe. The other racing snails are abrasive to Theo at first, but they all become fast friends. From the first time you see them, you know exactly what will happen with the taco brothers. It was also blatantly clear what Guy’s motives were before they were even revealed. I have no problem with predictable movies when they’re done well; seeing a familiar tale unfold well and with lovable characters can be pretty cathartic. But Theo and his friends are just stock characters with no depth or character development. Likewise, the predictable twists and turns aren’t executed well enough to justify retreading them. 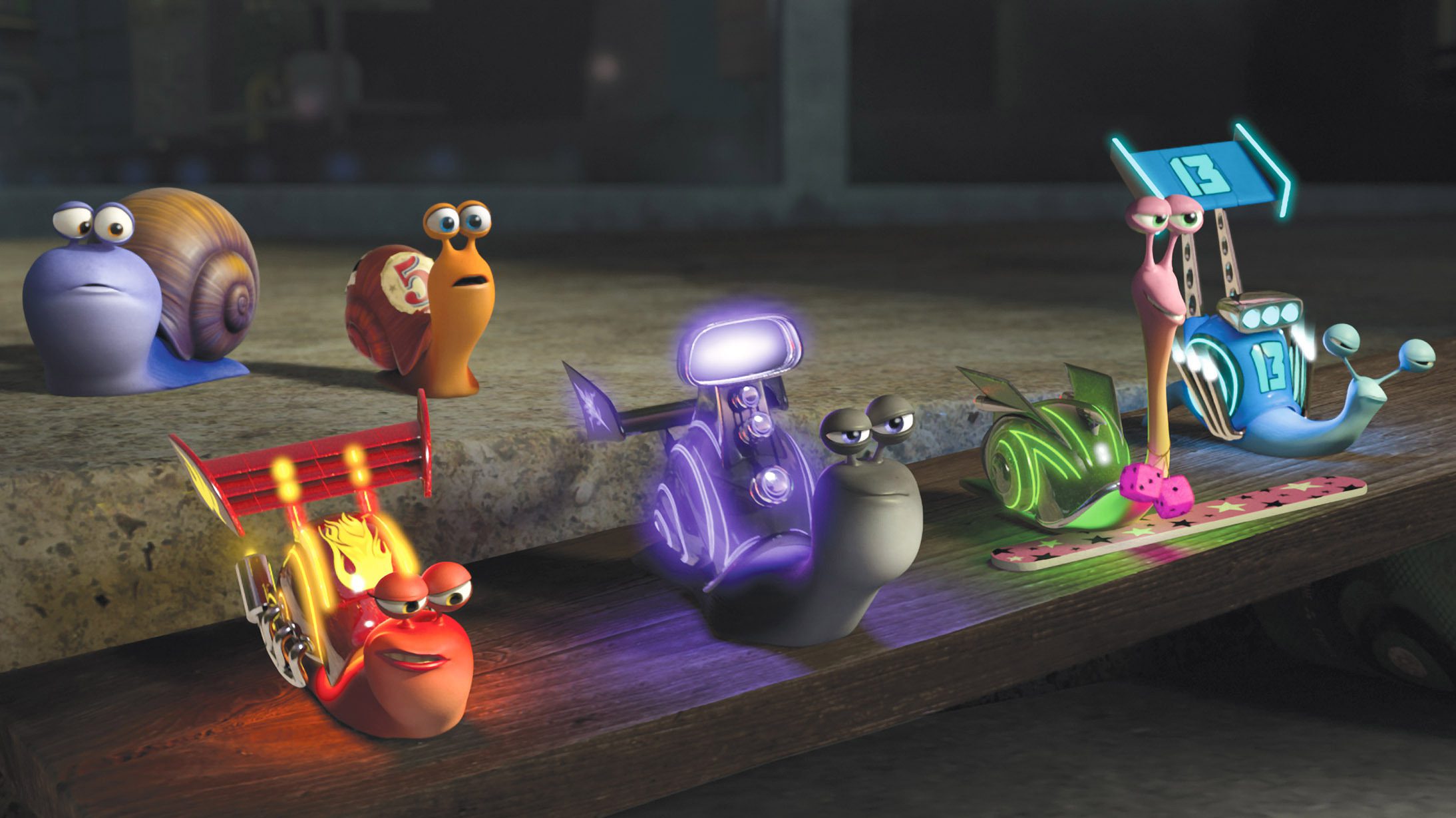 Turbo’s emotional core is supposed to be the relationship between Theo and Chet and how it parallels that of Tito and Angelo, the human brothers who run the taco shop. By the way, there are a LOT of stereotypes in this movie; ethnic, gender, cultural, you name it. I don’t care very much myself, and this movie isn’t really worth getting mad over because so little thought clearly must have gone into it. But if this is the sort of insensitivity that you can’t handle or will ruin a movie for you, save your time. Turbo isn’t worth seeing for its artwork or writing anyway, so you won’t be missing much. I say the two pairs of brothers should be the movie’s focus, not because that’s what I want or that’s what it would typically be. I bring that up because it’s obviously what the writers were going for, but these connections fail spectacularly. Theo and Chet’s relationship reminds me of Disney movies where you have a domineering father and a free-spirited, rebellious teenage daughter. Theo is the daughter, only he has less of a leg to stand on than Ariel or Jasmine. His ability to race is entirely dependent on an accident he just so happens to end up in. Chet is in the right, simply trying to keep his brother alive and employed. The plant (I can’t believe someone was paid to make this joke) they work at may not be Theo’s dream job, but he’s a snail. The movie does mental and physical acrobatics to make him a racer and thus justify his delusions and dreams. Although Chet is right, there’s no depth to his concern for his reckless brother. We don’t learn why he fears the world or even really anything about their bond as brothers. They don’t even mention that these characters are brothers until 45 minutes into the film. In fact, I spent much of the runtime wondering why Chet even bothered with his careless, unintelligent ex-employee. Tito and Angelo have it even worse; Tito is a dreamer with big plans, and Angelo is a hard-headed businessman. One scene directly compares the two sets of brothers, but nothing comes of it. It just displays that Angelo and Chet think the same way; ditto Tito and Theo. There was clearly an idea here, but they don’t go anywhere with it. 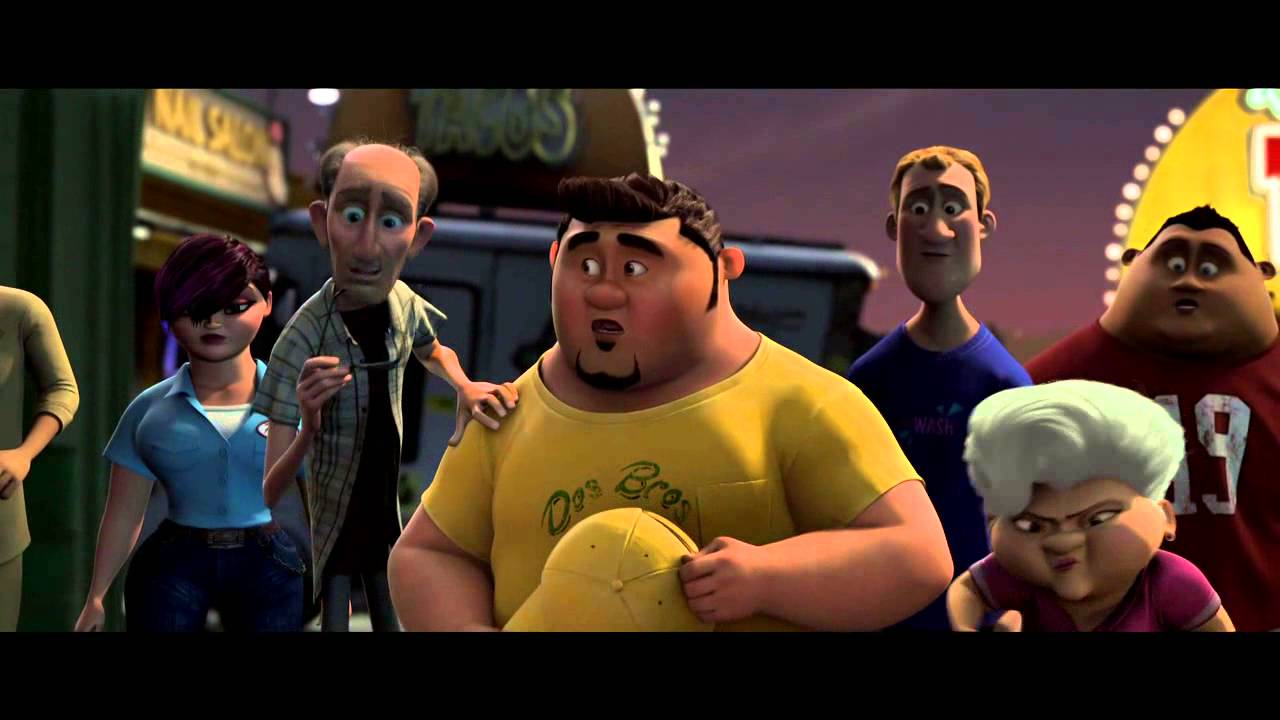 On a technical level, the animation in Turbo is fine. It’s not really anything special, but it’s also a low-mid-tier release from eight years ago. Some things look really good, like the cars and other shiny or plasticky surfaces. This is very common in computer animation. Anything organic just looks goofy, but not in a fun way. The human characters are ugly, and the snails just look like Happy Meal toys. I’ll grant that this is fitting; I’m sure that’s what they were designed for. This movie is toyetic, for what that’s worth. Turbo’s musical score was composed by Henry Jackman, and it’s serviceable. It would probably be even better if the scenes it served to elevate and energize were worthy of his efforts. The song choice for the film, however, is junk. Outdated, ill-suited pop and hip hop songs abound.

Turbo is positively baffling. I’m stunned that a major American animation studio produced such a bizarre film. The weirdest thing is that I’m not praising Turbo for this; I usually love to see big studios go outside the box and try something different. Turbo’s basic concept is thoroughly conventional and reminds me of a cheesy 90s sports movie. Yet the details make Theo’s journey too silly to get invested in, and his character does little to help.

Turbo’s basic concept is thoroughly conventional and reminds me of a cheesy 90s sports movie. Yet the details make Theo’s journey too silly to get invested in, and his character does little to help.

Hello, it’s me again and when you asked what I had in mind for reviews. Well, I am a huge Pirates of the Caribbean fan. I am in the minority as someone who enjoys all 5. That said, since first 3 are agreed to be best, I would love if someday you reviewed first 3 (all 5 would be best but that’s huge commitment so first 3 would be good enough).

Also, one of my favorite animated movies is Don Bluth’s Anastasia. I would love if you reviewed it too. You might have a different opinion from me and that’s totally awesome!

Or maybe you could review a war movie like American Sniper, Platoon, or Black Hawk Down (not sure if you are into war movies).

I actually did some of the Pirates movies a few years ago. I’ll see if I can dig up those documents. I’ll certainly consider the others. Thank you so much for reading and commenting!