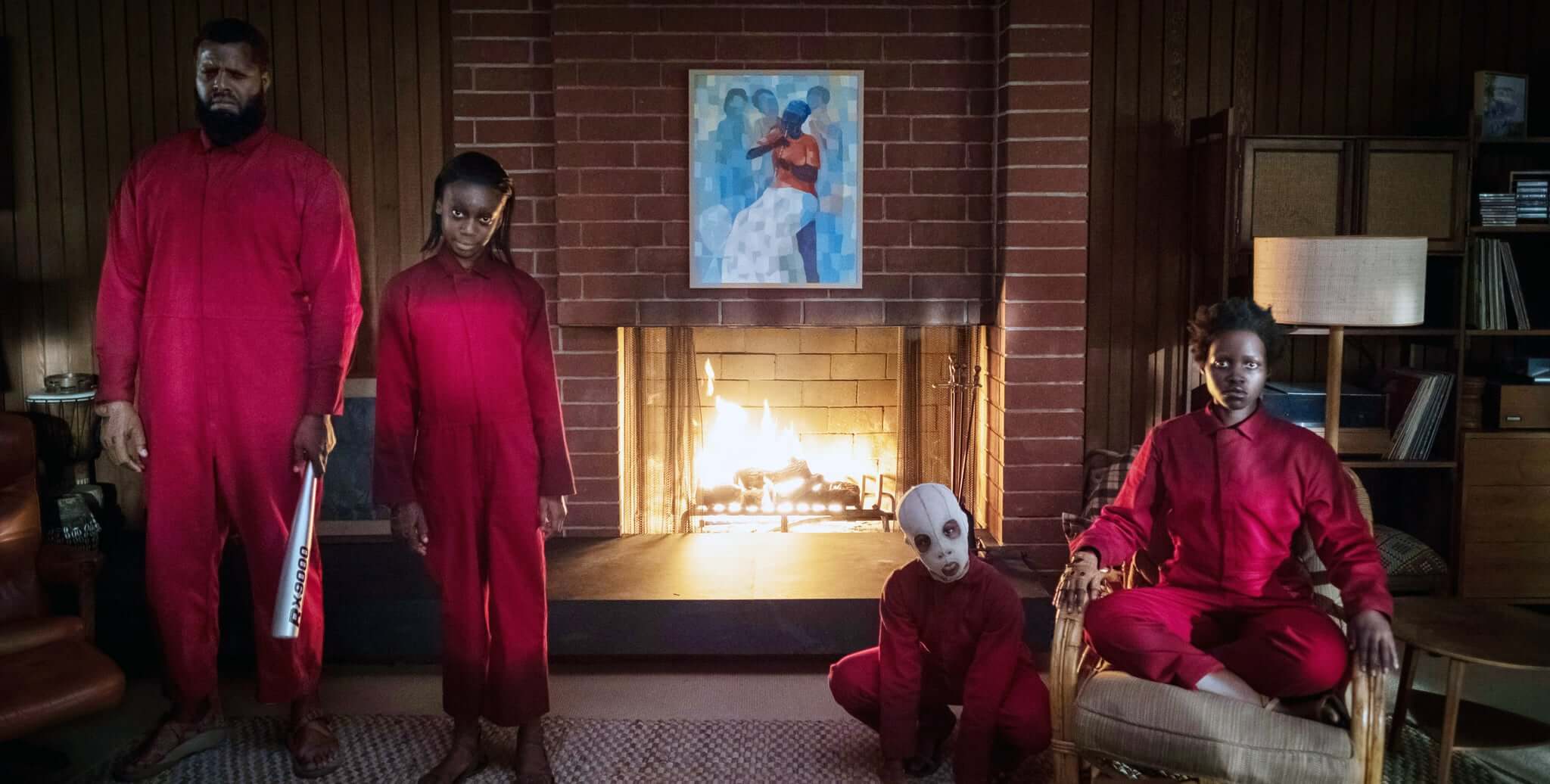 In 2017, Jordan Peele made his directorial debut with the horror film Get Out. People had questions about whether the sketch comedian could realistically find success with a horror movie. To say Get Out was successful would be an understatement; it was both a critical and financial triumph, grossing over $250 million at the box office, along with helping Peele grab his first Academy Award. The combination of scathing satire and social commentary made it the most creative movie of that year, and instantly one of my favorite movies of all time. Us is Peele’s attempt to duplicate that success. If there are people who don’t believe Jordan Peele was a brilliant filmmaker, Us will likely change their minds.

Us follows the Wilson family. During their vacation to a beach house in Santa Cruz, they’re terrorized by a group of people who look identical to them. The Wilsons must find a way to fend off the group while figuring out who they are and what they want.

Us is a shining example of what thought-provoking horror/thriller movies can look like in 2019. Every scene in this film demands attention from its audience. Nothing is put on the screen without a good reason. The material is so thematically rich that it can be viewed in multiple lenses that hold up. The beauty of Us is that even if you ignore the subtext, it’s still an effective horror movie.

The film starts off as an isolated home invasion movie. If you’ve seen movies like The Strangers, this is going to look very familiar. It’s not until the doppelganger family is center stage that the audience starts understanding that there’s a lot going on under the surface. Once Adelaide is confronted by her doppelganger, Red, the entire tone of the film flips to something much more sinister. The story Red tells about the girl and the shadow is both a fascinating summary of her life and a deeply personal motivation for this attack. As the movie progresses, the scope of it becomes more apparent. Us isn’t a story about one family; we’re just seeing it from their perspective. 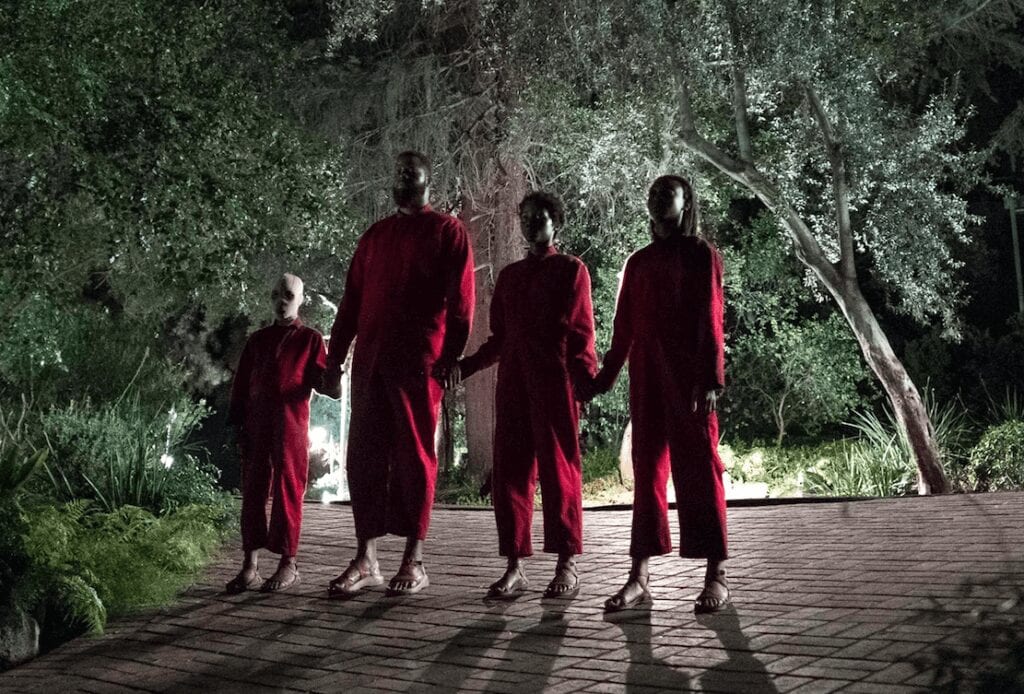 The Wilson family is full of interesting characters. Gabe, Adelaide, Jason, and Zora are all explored to some degree. Adelaide gets the majority of the attention, due to a traumatic event in her past. It helps give context to her paranoia and creates extra tension when we see the movie through her eyes. Gabe is responsible for most of the comedy in Us. He’s the father of the family and won’t hesitate to dish out dad jokes like they’re the coolest thing ever. Jason is the quiet son of the family. He likes to wear masks and do weird stuff around the house. He also has a deep connection with his mother. It’s clear very early that Adelaide’s love for Jason is unique, and they play off of that idea multiple times. Zora is the least explored of the family. We don’t get much about her character outside of the first act. This is likely because she’s portrayed as the “normal one.” She acts like a typical phone-obsessed teenager.

The effective characterization extends to the doppelgangers as well. While the majority of them are similar enough to each other, their mannerisms distinguish them from their counterparts. Red is particularly interesting because she doesn’t act like the other doppelgangers. By the end of the film we know a lot about her. Her relationship with Adelaide is the centerpiece of the narrative, and is the root of most of the tension in Us.

These characters in Us are effective largely because of the brilliant cast. Winston Duke is hilarious. Jordan Peele loves comedy, and he was fortunate enough to have Duke deliver his jokes. He has so much personality, energy, and charisma that you naturally become invested in his performance and his character. Shahadi Wright Joseph as Zora and Evan Alex as Jason are both great; their facial expressions and mannerisms go a long way in telling their story. For young actors to have to play two characters, they definitely stepped up to the challenge.

Lupita Nyong’o is on a completely different level. To say she’s brilliant would be an injustice to what she pulls off in Us. Her ability to play the loving, protective mother who is fighting both an internal and external battle for survival would’ve been a great performance on its own. Her disturbing portrayal of Red is what left the biggest impression on me. Everything from the scratchy voice to the way she walks feels off in the most disturbing way. Her two characters interact so much that, at times, she was a one-woman show, and I can’t praise her enough for it.

Jordan Peele has established himself as a must-watch filmmaker. Get Out was a brilliant demonstration of his ability to write an intricate screenplay that can be equally entertaining and socially conscious. Us has a lot of those same qualities. This is a great horror/thriller movie on its surface, but once you delve deeper into the material, it becomes clear that Peele is trying to address a lot of heavy themes. P.T.S.D., nature vs. nurture, classism, duality, and identity are just a few of what I picked up in my two screenings of the movie. He also created his own lore for this world that I would love to know more about. I know people have been mixed on Peele’s decision not to leave certain plot points ambiguous. I actually appreciate that he gave definitive answers to things that could’ve been easily assumed, and there are a still a bunch of questions that the audience can debate about for years to come.

As good as the writing is, it is overshadowed by Peele’s direction. Every scene in Us has significance to either the story or an underlying theme. Peele has also shown that he’s not afraid to wear his influences on his sleeve. We get visual homages to movies like Jaws and George Romero’s “Of the Dead” films. It never feels like a cheap imitation, either; he just knows that those visual styles can help him better convey his message. He’s clearly a student of his craft, and it’s obvious he worked closely with his cinematographer to get the exact shots he wanted. 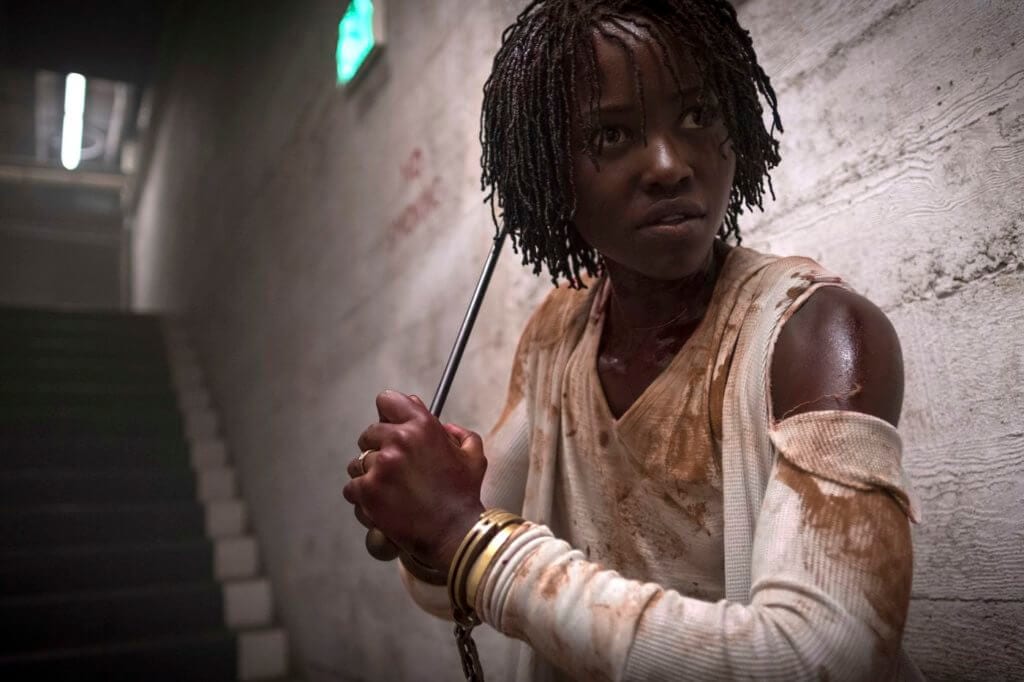 I love how both the score and the soundtrack are used in Us. The soundtrack includes songs from N.W.A., Janelle Monae, and the incredible mix of “I Got 5 On It” by Luniz that will forever change the way I feel about that song – it helps create one of the most creative scenes I’ve seen in a horror film. I also never thought that N.W.A.’s “Fuck Tha Police” would be used during such a nuanced moment. The score’s main anthem is a combination of percussion instruments and choral singing. It almost sounds like an opening song for Ghost in the Shell. The track “Beach Walk” sounds like what would happen if Kanye West decided to compose horror music. It’s this mix of unnerving and catchy that really caught my ear early on.

Us is a fascinating movie that I hope people will go out and support. Jordan Peele is an ambitious filmmaker that continues to impress me with both his writing and directing. He has this ability to create intense stories with tons of symbolism, while also making it a fun movie that you can joke about later. It’s this happy medium that he’s riding so well that makes his films unique. I loved every bit of it.

Us is another home run for Jordan Peele. Masterful direction and a multi-layered screenplay make sure that Peele avoids the sophomore slump. A cast led by two powerhouse performances from Lupita Nyong'o help make this a unique viewing experience.