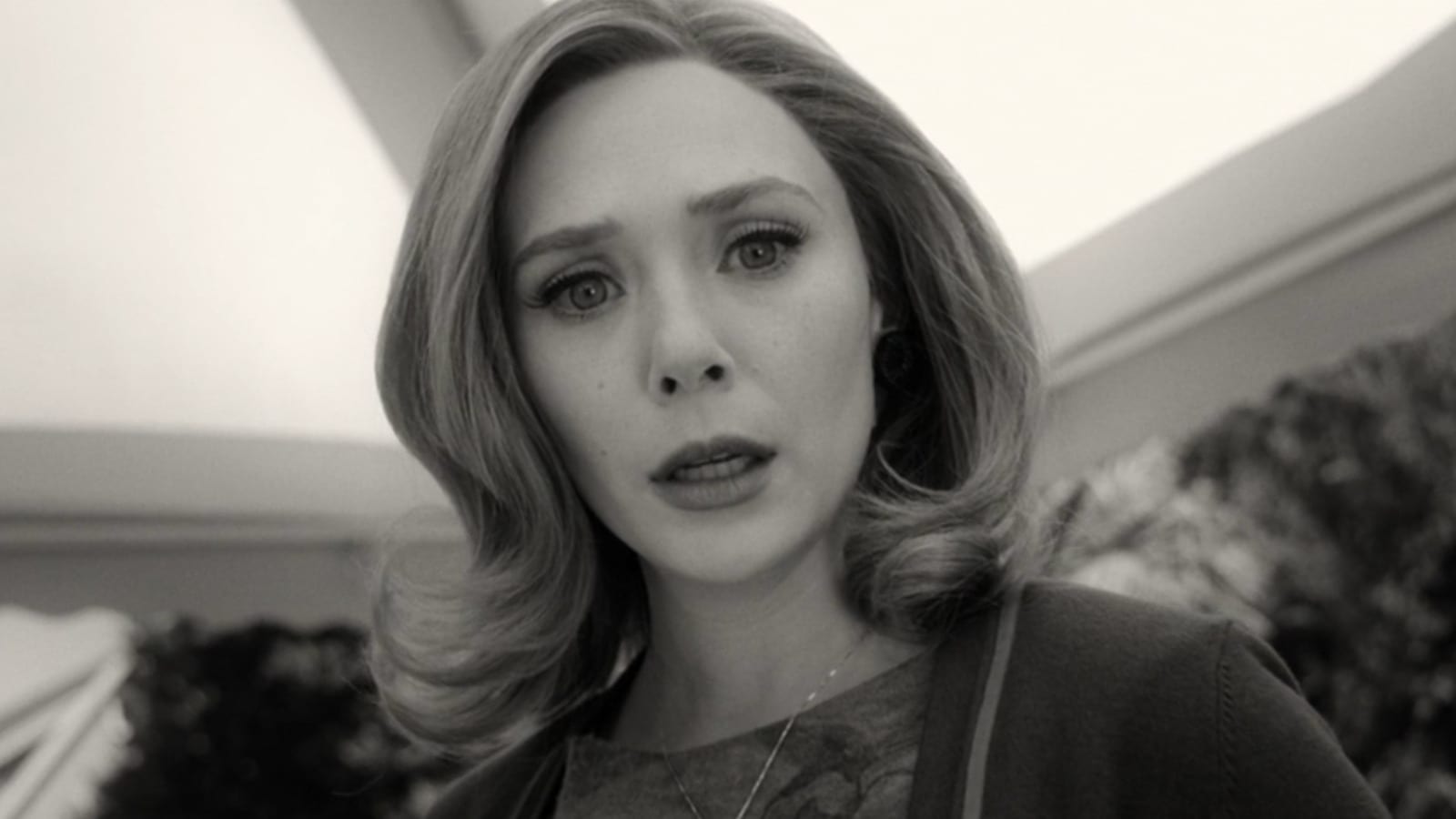 Perhaps I jumped the gun a bit when I mentioned Bewitched in the pilot review. WandaVision episode 2 transitions from the 50s to the 60s, with a title sequence that’s a spot-on parody of the seminal magic wife series. But while the series premiere was a fun breath of fresh air, its follow-up has the novelty of the sitcom setting begin to wear out its welcome.

The opening scene of WandaVision episode 2 is all about transitions, with the tone seemingly shifting along with Wanda’s mystical fiddling with the light switch. Suddenly, she’s the braver of the two while Vision cowers after hearing strange noises that end up being a wayward tree branch. Then their twin beds become a shared one, and talk turns to physical passion barely hinted at last time. Episode 2 is a little racier, a little wittier, a little more subversive.

To that end, the trappings of the era aren’t embraced so much as poked at: Wanda’s talent show meeting is more like a cult, with the Queen Bee serving the Kool-Aid, while the neighborhood watch group Vision hopes to join is really just a gossip club for the husbands. Wanda threatens to scandalize the town by wearing pants while everyone around her is in a floral dress, and the addition of black characters in more prominent roles indicates the shifting racial mores as TV history progressed. These changes are handled just right, with no judgment or woke lecturing; they’re just there for us to appreciate. I hope they stick to this, and not only with WandaVision. 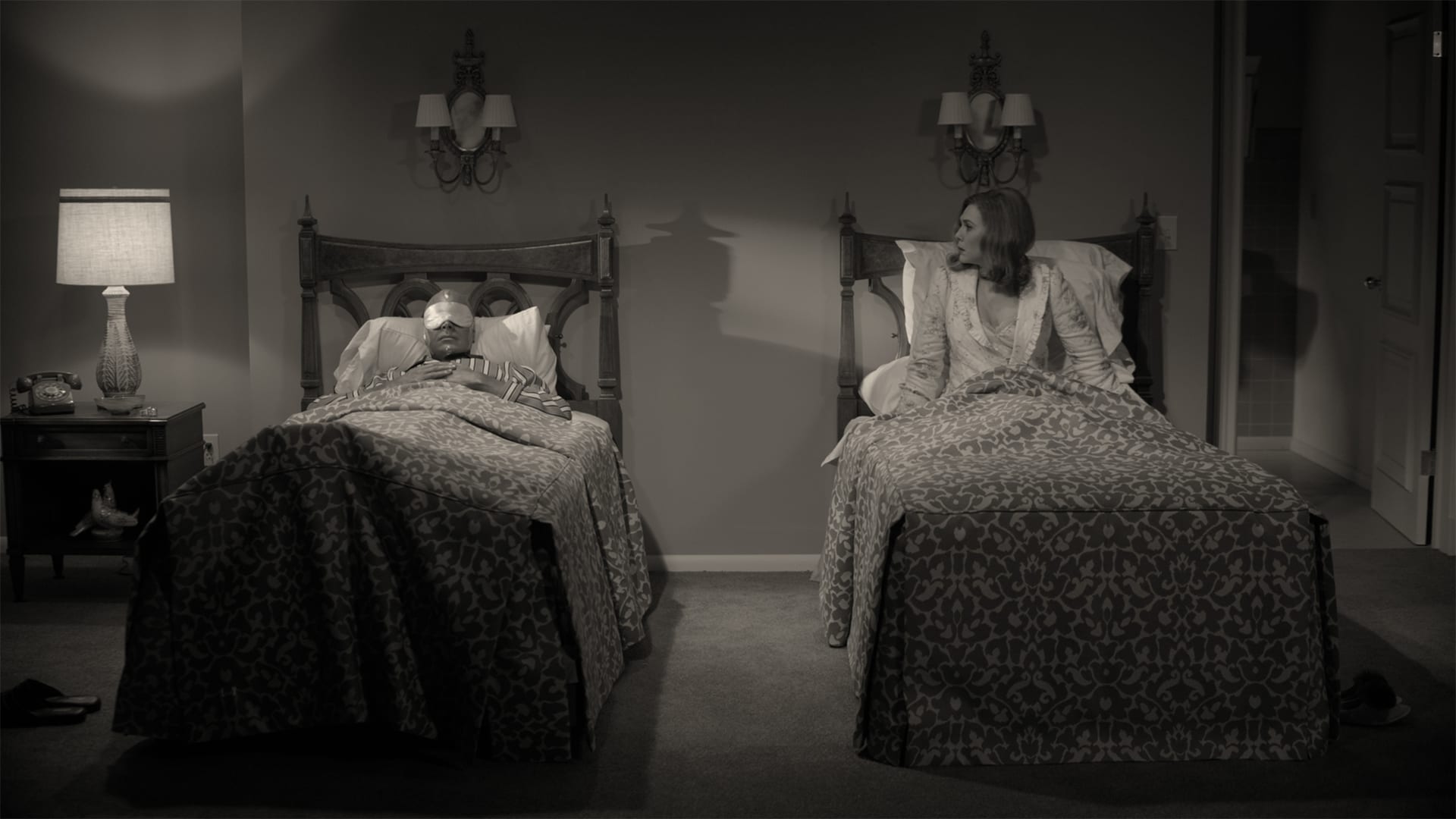 There are other transitions made in WandaVision episode 2 as well. Bewitched began its run in black and white but switched to color in its third season, and WandaVision pays tribute to that by slowly introducing color to the black and white scheme, similar to something like Sin City. It’s a beautiful effect, and it’s used sparingly enough not to be distracting or feel like a gimmick; it also has a sensational payoff. The visual changes help a shift to a more elaborate comedy style too, particularly the climactic set-piece where Wanda and Vision put on a magic show.

This is also where WandaVision episode 2 starts to tear at the seams. The magic show isn’t nearly as funny as they seem to think it is, and it goes on for a while, so what is supposed to be the episode’s showstopper becomes tedious. Vision is acting like he’s drunk – he’s got a wad of chewing gum stuck in his mechanical innards that, for some reason, produces the same effect – but he’s TV drunk, the exaggerated kind of inebriation through which sitcoms often put their characters. I get that it’s a commentary on the trope, but that doesn’t make it any more entertaining. They try to add a little bit of fun by having Vision almost give himself away a few times in his stupor while Wanda uses her real magic and disguises it as fake magic, but it doesn’t work, and everything drags. Speaking of which, this episode is longer than its predecessor and proves that, at least for now, WandaVision benefits from brevity.

And that’s the heart of the matter. WandaVision episode 2 shows the limits of the “We’re in a sitcom” gag. It was funny once, but it gets old fast. Maybe it’s partly because the shift in tone and humor styles isn’t drastic enough between these two episodes, so it feels too much like more of the same. But it’s something I hope they were cognizant of when they were filming the show because I can’t see them sustaining this for much longer. WandaVision has a lot of promise, and I’d hate for it to grow stale. 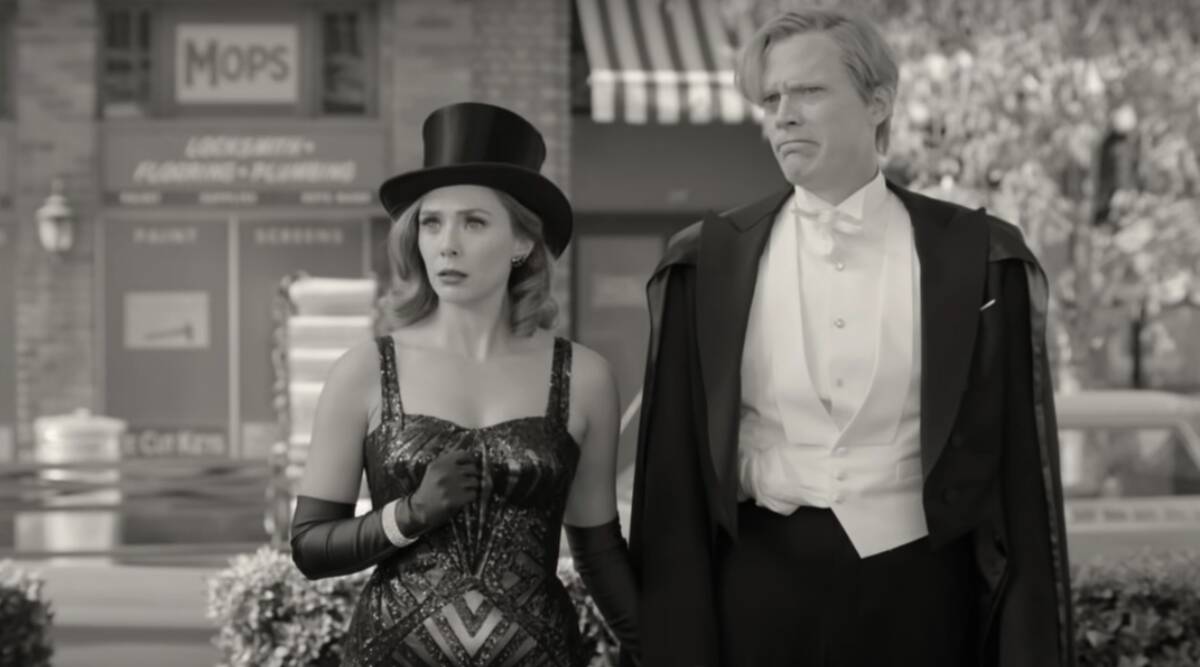 But I think they’re laying the groundwork to avoid that. There are more hints in WandaVision episode 2 that something bigger is going on behind the scenes of the TV Land in which Marvel’s oddest couple are trapped. A voice suddenly comes out of a nearby radio asking Wanda what “they” are doing to her, and the final moments show not only that whoever is behind this can rewind the sitcom, but that there’s a beekeeper who stalks the sewers, one whose appearance breaks the spell on Wanda, if only temporarily. This is further indication that Wanda is not doing this, and is not a willing participant either; it also suggests that Vision is still dead, and Wanda is the one having the sitcoms inflicted on her. It would behoove them to intensify this as the series continues and the format wears ever thinner.

It isn’t bad, though, and the performances in WandaVision episode 2 are good, if not as good as those in episode 1.  Elizabeth Olsen and Paul Bettany adapt well to the new era, although it feels like less of a shift backwards, especially for Olsen. She seems more Ike herself this time, even as Vision is still far from the living computer he is in the films. Kathryn Hahn is the neighbor again, and she’s just as funny and perfectly cast in the Bewitched world, acting as Wanda’s guide through the neighborhood’s social hierarchy. Disappointingly, Debra Jo Rupp is little more than set decoration this time, and  Fred Melamed only turns up as a drawing in the animated title sequence (though he still appears to be Vision’s boss). Buffy’s Emma Caulfield turns up as Dottie, the domineering snob who runs all the women’s activities, and she’s great in a role closer to Cordelia than Anya. Teyonah Parris doesn’t have much to do, but I’m sure that will change down the road, given who she’s supposed to be playing.

WandaVision episode 2 is decent,  but it’s not as fun as episode 1, and it shows the limitations of the setup. If they continue to expand beyond the sitcom tribute, they can easily overcome this potential problem, but the show could squander its goodwill if they get too comfy.

I’m enjoying these reviews Alex. But I like this one as much as the first one. I feel like it flowed well in the way it is setting up whatever con is being played on Wander.

It has my wife and I very interested in finding out how this all conects to the wider MCU.

Also, did you notice in the old commercial that they played during the episode? It was for a watch with the brand name Strucker. It also had a Hydra symbol on it.

I can’t wait for ”Episode 3”. Great review Alex, thanks.

I did notice that, and the commercial from the first one with the Stark product. I love that idea; I don’t know if they’re clues or just fun Easter eggs, but either way, they’re great.

This review is spot on! Exactly how I felt watching the second episode. The part for me that kept me going was the brief hints that something isn’t right and Wanda is starting to realize it, ever so slightly. Enough to keep me intrigued. I’d say so far im decently content with the show, and I hope they keep that up. Especially when it comes to not being preachy and woke, because Lord knows there were plenty of opportunities

Yeah, it was a relief they didn’t go that route. It sucks because it shouldn’t be this way, but nowadays you’re always waiting for the woke hammer to drop.

I’m definitely still into the show, and I think it will start to get more into the larger story bit by bit. And some of the other TV eras should be different enough that it can avoid feeling stale.

Thanks so much for reading!