“Catch you on the flip side, Vision.” 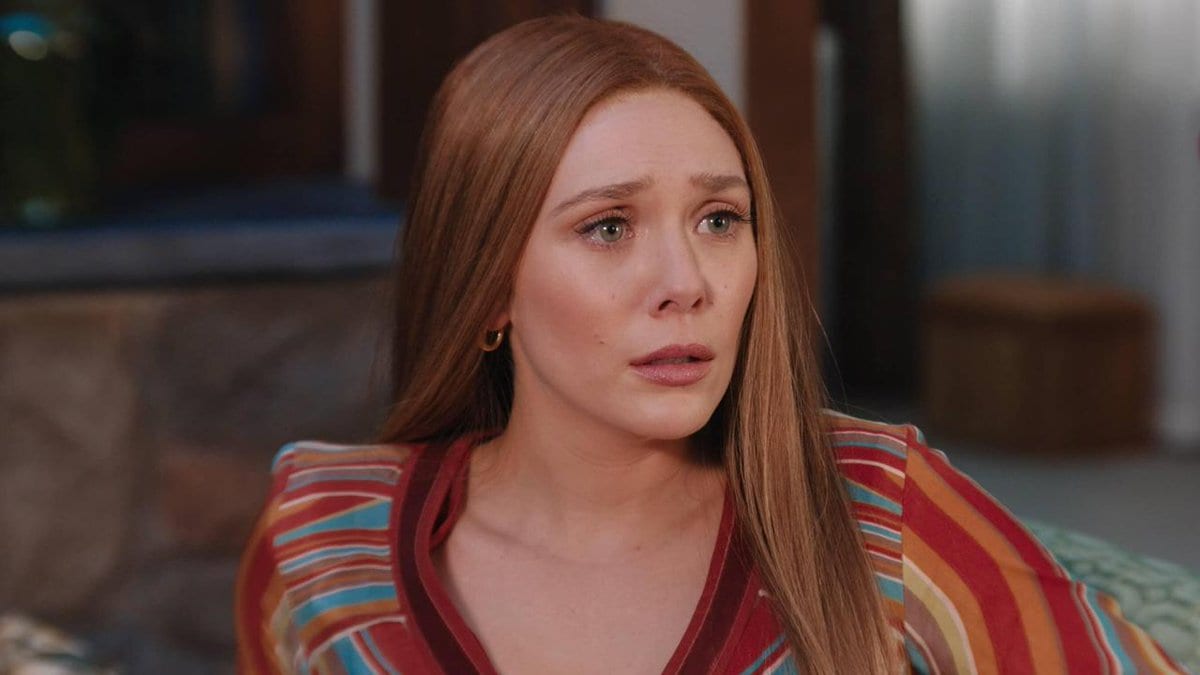 Last week, I hoped that Marvel’s first Disney+ series wouldn’t fall into a rut and become tedious, but it’s avoiding that danger already. WandaVision episode 3 – which is called “Now in Color,” as they’re finally titling their episodes – is a significant improvement on episode 2, regaining the momentum that lagged a bit in the previous outing and striking exactly the right balance between sending up sitcoms from decades past and moving the overarching story forward.

The 70s are the satirical target this time, and “Now in Color” immediately elicits some belly laughs from the decade-appropriate opening credits. They’re funny in themselves, with that silly theme song that sounds like it would have come from a forgotten family sitcom you only discover on TBS, but they also set up the aesthetic for the episode; Wanda is dressed like a flower child, while Vision has the sweaters and corduroys of a Mike Brady. The black characters all have afros, the mustaches are thick, Wanda and Vision’s house is almost exactly like the Brady home, and it’s always bright and sunny outside. As dark as cinema got at the time, TV was an escape from the pessimism and distrust that permeated American society (give or take the occasional All in the Family), and WandaVision gets that, big time – the shiny, happy veneer of “Now in Color” masks an unsettling truth at the heart of Wanda and Vision’s world, and there are more clues this time that something is way off in TV Land. 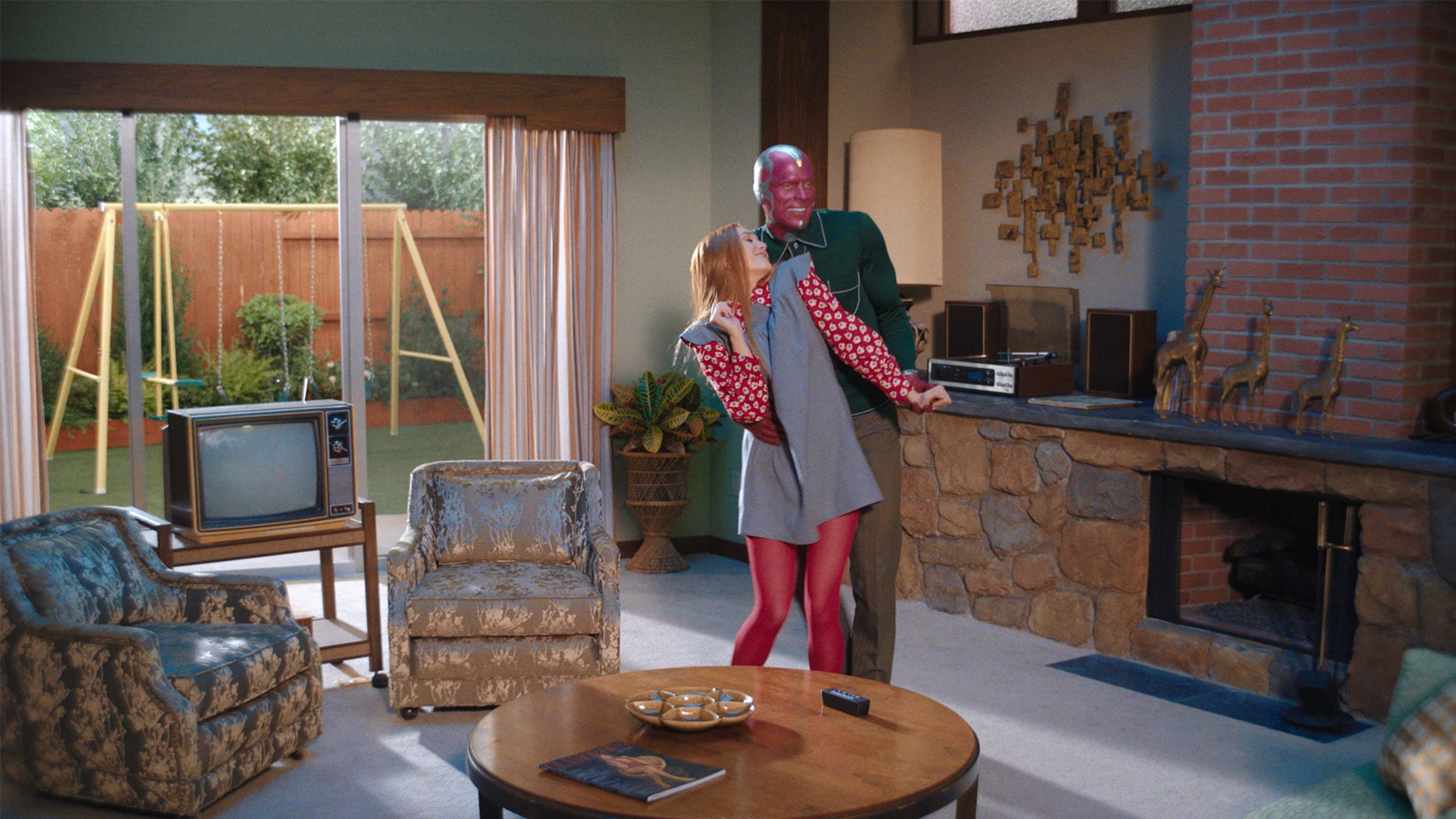 The most obvious indication is that Wanda is still pregnant in “Now in Color,” as she was at the end of episode 2. Her pregnancy is also moving along at an alarmingly fast rate – or it would be alarming if the pair weren’t in sitcom mode – and, while their doctor says she’s got a few months yet, Vision calculates a due date of a little over 24 hours. Wanda’s labor pains also cause a lot of magic-induced trouble, like frying the electricity down the whole block. This time, it’s Vision who senses that there’s more going on than they understand, but just like when Wanda realized it, the scene suddenly rewinds, and Vision is blind as a bat again. But it’s not just Wanda and Vision anymore; the supporting players begin to act strangely, like Teyonah Parris’ Geraldine knowing exactly how Quicksilver died, or the doctor talking gloomily about the impossibility of escaping their town, or Kathryn Hahn and David Peyton (whose neighbor names are perfect: Agnes and Herb) suggesting that something may be up with Geraldine.

Geraldine also sports a necklace with a sword in it; I missed the references to SWORD, Marvel’s alien defense agency, in the last two, but this one is front and center, so I guess we can safely assume they’re behind this. What alien researchers want with two Earth-based heroes is a mystery; maybe they’re interested in their experiences with Thanos and his armies of extraterrestrials. But why study them in sitcoms if that’s the case? Or perhaps they’ll be different in the MCU. Having a government agency like SWORD as the villains is the perfect reveal for the 70s, though. This is where “Now in Color” gets clever; while everyone is happy in their fantasy sitcom world, devious government snakes are controlling them, doing whatever they want, and having to answer to no one. The final moments even feature black helicopters, the go-to symbol for conspiracies. It’s sly and subtle and not only encapsulates the period of American history but fits well with the story and its unfurling.

On the lighter side of things, the sitcom sendup stuff works better in “Now in Color” than it did last time. It might be the more significant changes from the eras like I surmised may be the case; society – at least as it was portrayed in comedy shows –was different, and with it came a new style of humor, new types of plots, and even a new way of filming. For example, in the first scene, a doctor visits to examine Wanda’s pregnancy, and one of the shots is at an awkward angle, where the doctor is the focus while Wanda and Vision are pushed to the side as they’re speaking; they should be the center of the action, but the camera treats them as afterthoughts. It’s a lousy shot, but it happened a lot back then, maybe to make the most of the guest stars. The bigger gags work better than that overlong magic show from episode 2; the biggest one is when Wanda gets closer to her delivery, and her magic goes wonky, which she’s got to keep a secret from a visiting Geraldine. This one is more successful because it incorporates other forms of humor around the sight gags, like Geraldine telling a funny story from her office. There is also an abundance of bad puns and overly theatrical reactions, which were common at the time too. This episode is much more The Brady Bunch than All in the Family (good God, could you imagine if they tried to do All in the Family today, even as a parody?), but those types of jokes were used often on that show as well. 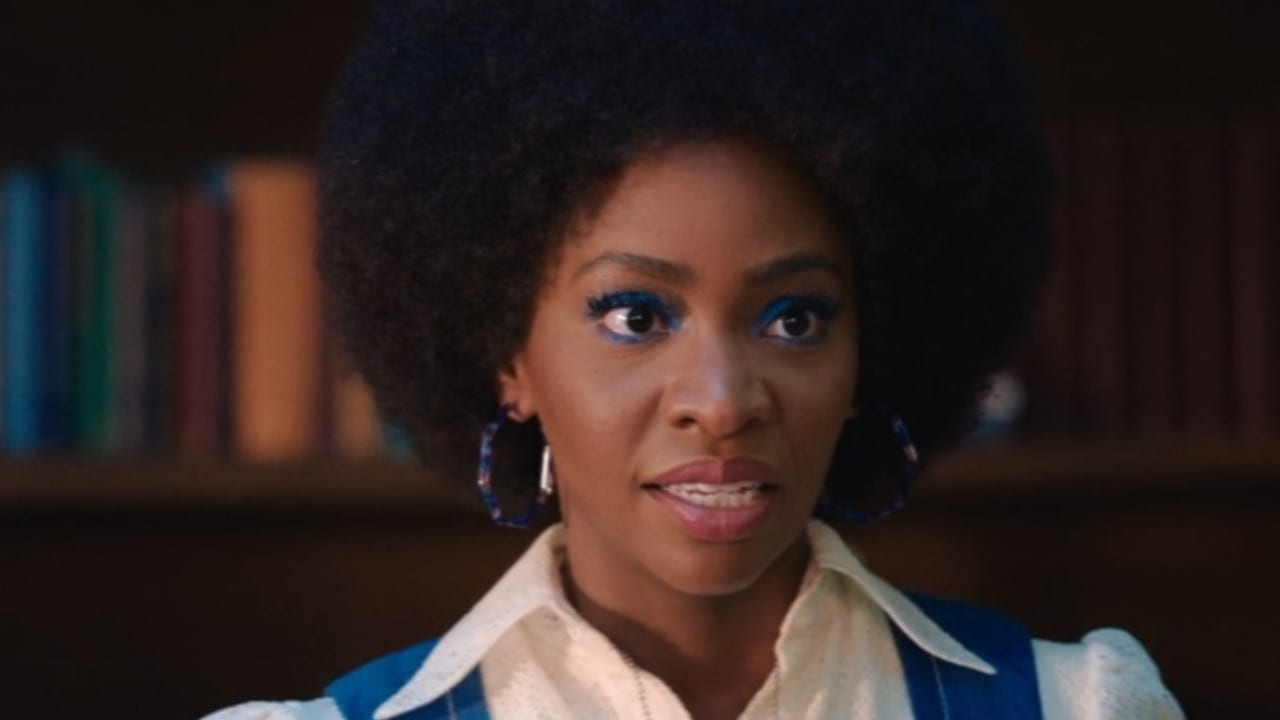 The acting continues to be strong in “Now in Color.” While Elizabeth Olsen and Paul Bettany are as good as they’ve been, the standout is Teyonah Parris. This Geraldine is worlds away from the version of her from episode 2, and Parris is just as believable this time. She plays up the slang side characters dished out relentlessly at the time, and she simultaneously appears to be sincere and in on the joke. And once she lands in the real world, she has no lines, but her entire demeanor has changed, again believably. Kathryn Hahn and David Peyton don’t have much to do, and Emma Caulfield shows up for one line, but I think this has a purpose too; SWORD, or whoever is running this show, uses different actors as it sees fit, so the supporting cast will go from best friends one week to background noise the next.

“Now in Color” is WandaVision’s best episode yet, mixing sitcom parody with the evolving thriller story impeccably. The humor is funny, the mystery is fascinating, and the performances shift as successfully as the tone. I think the show has its footing now.

I found it weird that the doctor didn’t find it strange that Wanda gave birth at the end of the episode, despite stating she’s only 5 months pregnant at the beginning of the episode. The neighbours calling the Vision Vision was also weird. How exactly do they know who he is? Are they members of sword as well? Are they being forced to be “characters” in this “sitcom”? I’m really enjoying this show.

The supporting players seem to be in on it. They’ve called him Vision since the beginning, and their character breaks in this one make it look like they’re doing it consciously. The doctor says at one point that you can’t escape the town, and he says it in an ominous tone, like he knows he’s not just making a joke. Maybe they have to go along with the weird stuff, like giving birth so quickly, to help Vision and Wanda go along with it. THey could be members of SWORD, or they could be prisoners as well; the doctor doesn’t seem like a willing participant. It’s hard to tell yet, and that’s pretty cool. I like the guessing game.

I enjoy it too, and I like how it’s progressing now. They’ve got me looking forward both to the revelations about the larger story and seeing which sitcom(s) they parody next.

Also, I don’t think SWORD are the ones behind it. It’s too obvious, like how they focus on Geraldine’s necklace when she gives herself away by revealing that she knows how Pietro/Quicksilver died. SWORD is definitely involved, we just don’t know to what extent. Are they truly the ones behind what’s going on? Are they just observing what’s going on? Are they trying to help Wanda and Vision escape? It’s clear that they were meant to be there in secret, but Geraldine messed up.

It’s possible, but I don’t know why they’d keep the charade going if they wanted to help. Whenever Wanda or Vision seems about to realize what’s happening, or that something is happening, they undo it. I guess it could be that someone else is doing that (maybe even Wanda herself if that does turn out to be the case), but I don’t know why they’d be able to monitor it to the extent they are if someone else is in control, or why they’d undo any progress the two of them make if they’re really trying to help.

But, of course, anything can happen, which is really fun.