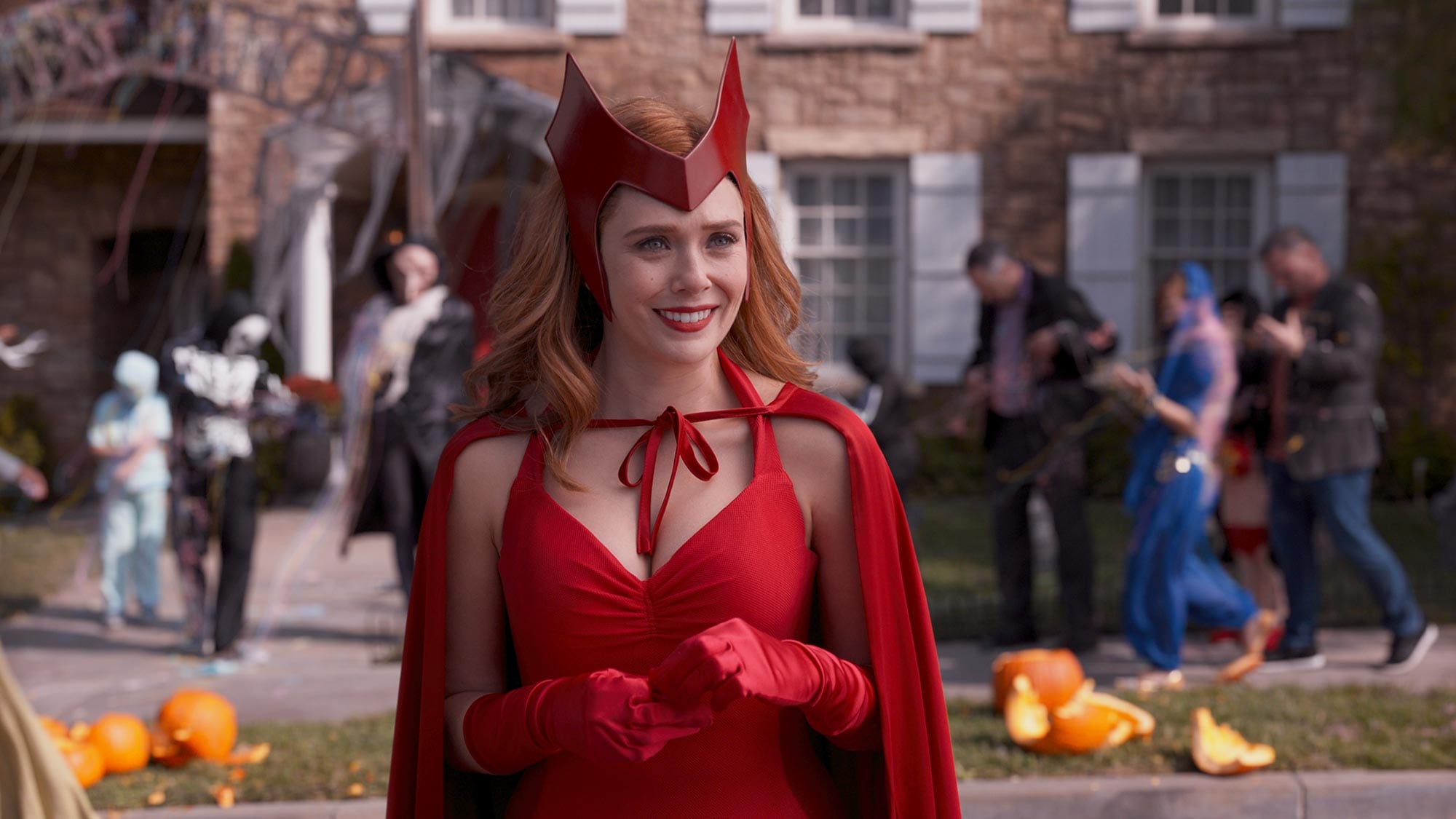 After the big events of last week’s episode, WandaVision slows down a bit in “All-New Halloween Spooktacular,” choosing to use character interaction to fill in some blanks. That doesn’t mean there’s nothing else going on; the plot progresses, Vision has more to do than usual, and that ending opens up some fun story possibilities. And there are in-jokes – lots and lots of in-jokes.

Now in the 90s era of family sitcoms, Wanda and Vision prepare to take the twins out trick-or-treating on Halloween (which means this is where those comics-accurate costumes from the trailer show up), but Vision’s neighborhood watch duties force Wanda to bring Pietro along to give the boys some guy fun. SWORD’s goals and tactics become murkier, forcing Monica, Darcy, and Jimmy Woo to go rogue. 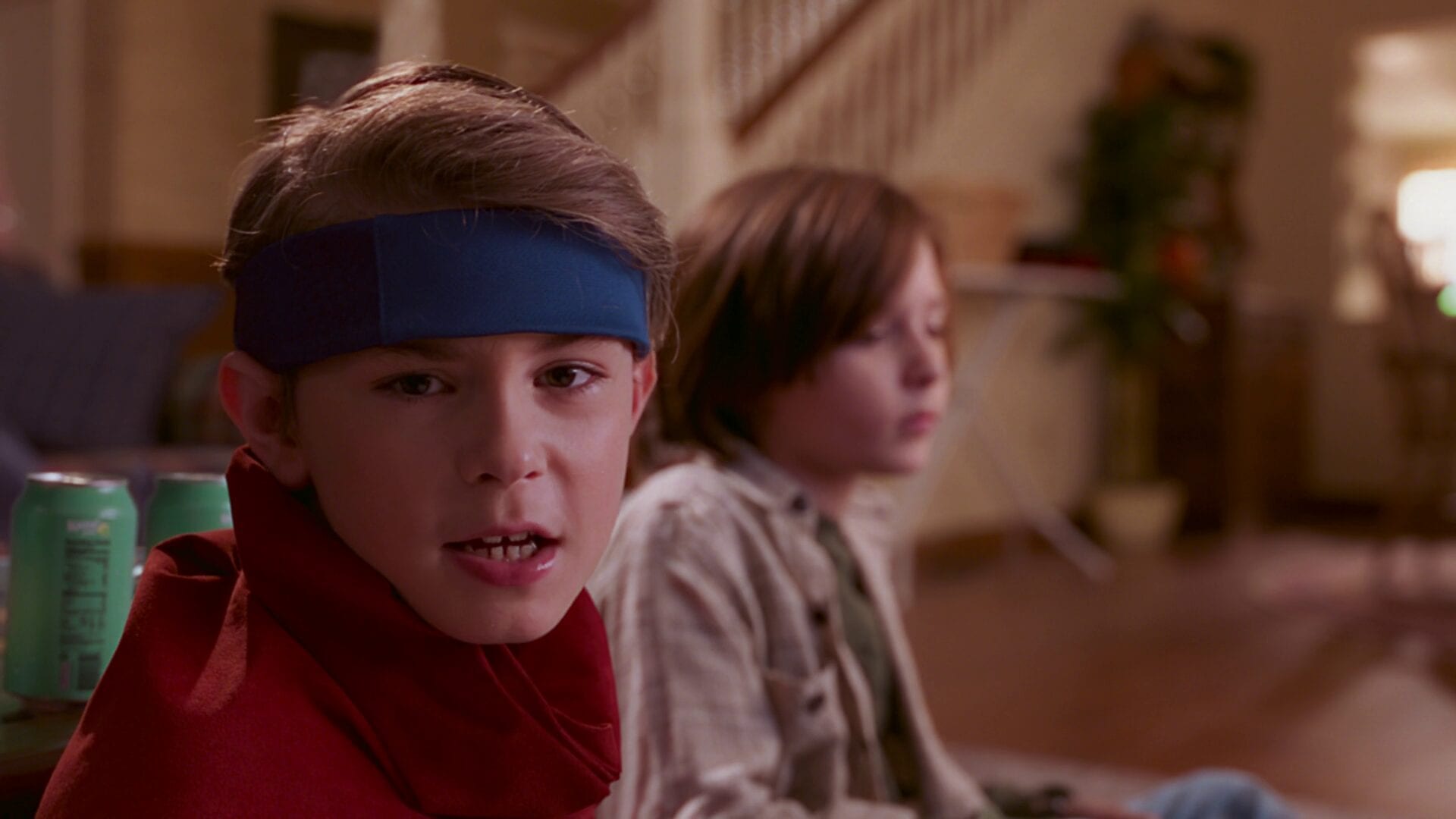 “All-New Halloween Spooktacular” tackles 90s television, which is a double-edged sword. WandaVision’s setup necessitates that it stick to family comedies, especially now that Billy and Tommy are here, so the real landmark series that defined the decade can’t be used. That means no Avengers sitting on a couch in a coffee house like Friends or disputing life’s minutiae in a diner like Seinfeld. While a bummer, this doesn’t mean there’s nothing for them to work with, and they instead set their sights on shows like Malcolm in the Middle, with a handheld intro and rock music as the theme song. This is smart because it uses the focus on the kids rather than the adults to show how shifted the Maximoff/Vision family paradigm is now that Tommy and Billy are around. Suddenly, their boys are the driving force in Wanda and Vision’s life, and the “episode” within the episode is about taking them trick-or-treating.

This setup allows “All-New Halloween Spooktacular” to explore some of the other 90s sitcom tropes mostly absent from the more famous shows of the decade. First, there’s the father who doesn’t spend enough time with his kids and allows his work – or other responsibilities – to get in the way of family time. For Vision, that’s the neighborhood watch, which must be extra vigilant on All Hallows’ Eve, lest eggs and toilet paper blanket the suburbs. This means Vision tapping in Quicksilver to join Wanda in chaperoning the festivities, and it’s through him that the show explores the slackerdom of 90s television. Pietro sleeps past noon, lives with his sister and brother-in-law, walks around the house in boxer shorts and an undershirt, and relates to the kids better than the adults. He embodies the aimless lounging of late Generation X (hmmm), as well as the worse-suited role model for the Maximoff children that Vision necessitates with his lack of presence. It’s clever and understated, like the best of the show’s TV satire. It also raises an important question: why is Vision so intent on something as meaningless as the neighborhood watch in a place with no crime, and why does he seem to be the only one in town who is? 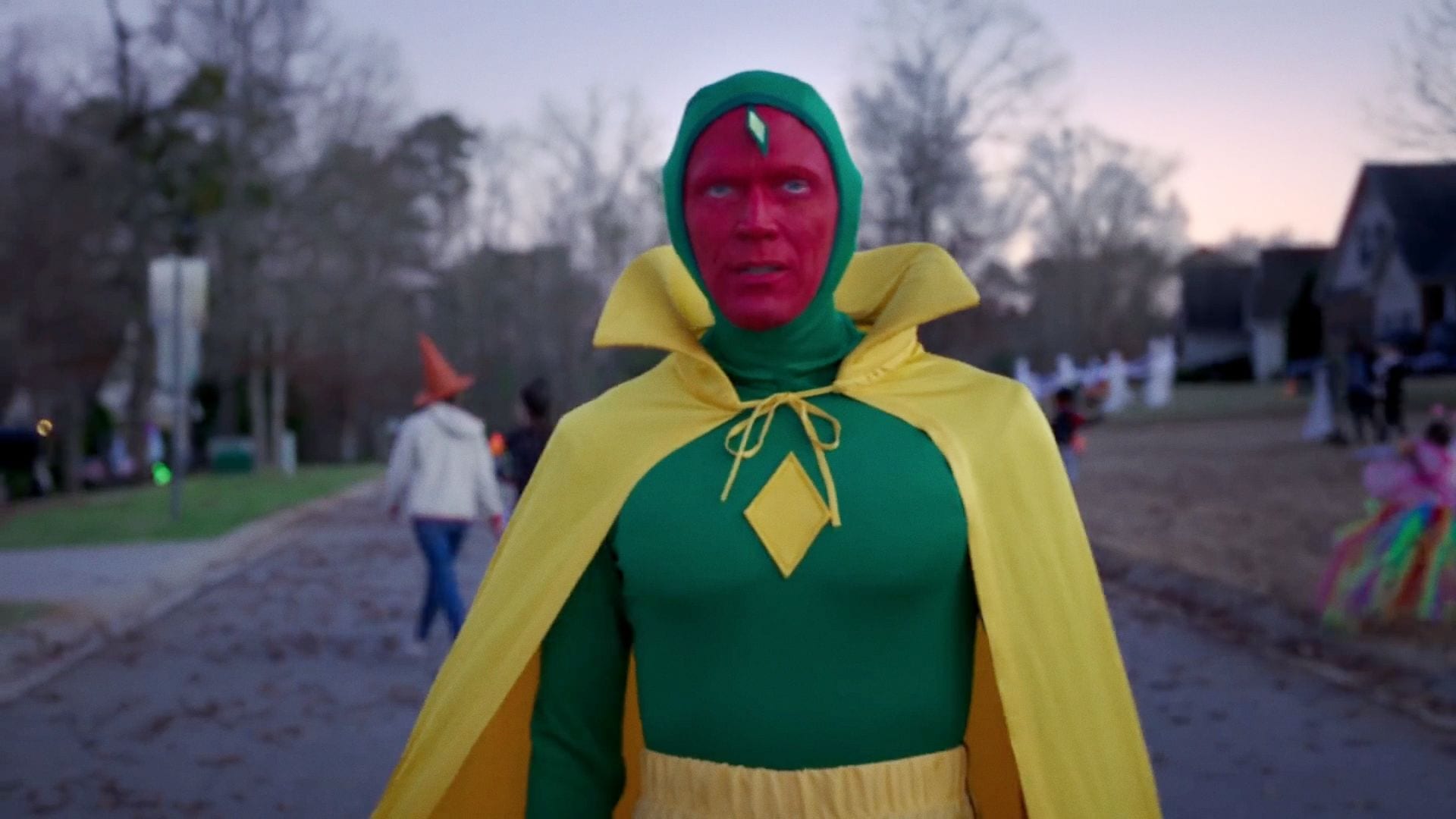 Because he’s acting out his inner desires. That’s what “All-New Halloween Spooktacular” subtly reveals has been going on with Vision. The wacky things he does in these sitcoms are the manifestations of his growing understanding that something strange is happening. He put on a magic show because he wants to understand the magic Wanda is working on Westview. He joined the neighborhood watch because he wanted to protect a neighborhood he knew was in danger. Now, he patrols alone because he’s investigating the odd occurrences he’s been noticing. And it’s getting even weirder: everyone that isn’t interacting with Wanda or the kids is frozen, waiting for a Maximoff to come along and give them purpose again. They’ve been robbed of their lives independent of Wanda, and Vision is starting to understand that he’s the only one who can help them – or he would be if he could survive crossing the barrier into the real world. Outside of Wanda’s fantasy, Vision is dead, so he can only function as the messenger, pleading with SWORD to help the trapped Westview residents. Paul Bettany is very good, allowing just a bit of confusion in his bewitched moments to show that he isn’t completely under Wanda’s spell anymore, and his earnestness in wanting to help her victims reminds us of what made him worthy in Age of Ultron.

Speaking of Age of Ultron, Quicksilver’s return is explained as well, and his function in “All-New Halloween Spooktacular” is tied to it. Wanda conjured her brother when the pressure of maintaining her illusion became too much to bear, and she needed a confidant. As such, Pietro knows the truth about Westview and, ironically, can be separated from the spell while being one of the heaviest-fabricated parts of it. And, to avoid the pain of seeing her murdered brother’s face, she “recast” him when she brought him back. Pietro’s presence is important because it gives Wanda a sounding board to tell her side of things, if only marginally at the moment. While she’s in control of Westview, Wanda seems confused as well; she doesn’t even know how she started the hex, meaning she doesn’t remember breaking Vision’s body out of SWORD headquarters. This is a further indication that she isn’t doing this on purpose and doesn’t mean to hurt anyone. But she does confirm her pain at losing virtually everyone she loved and how she’s making the best of things rather than completely losing her mind to the fantasy. We still don’t know everything, but the breadcrumbs continue to drop. 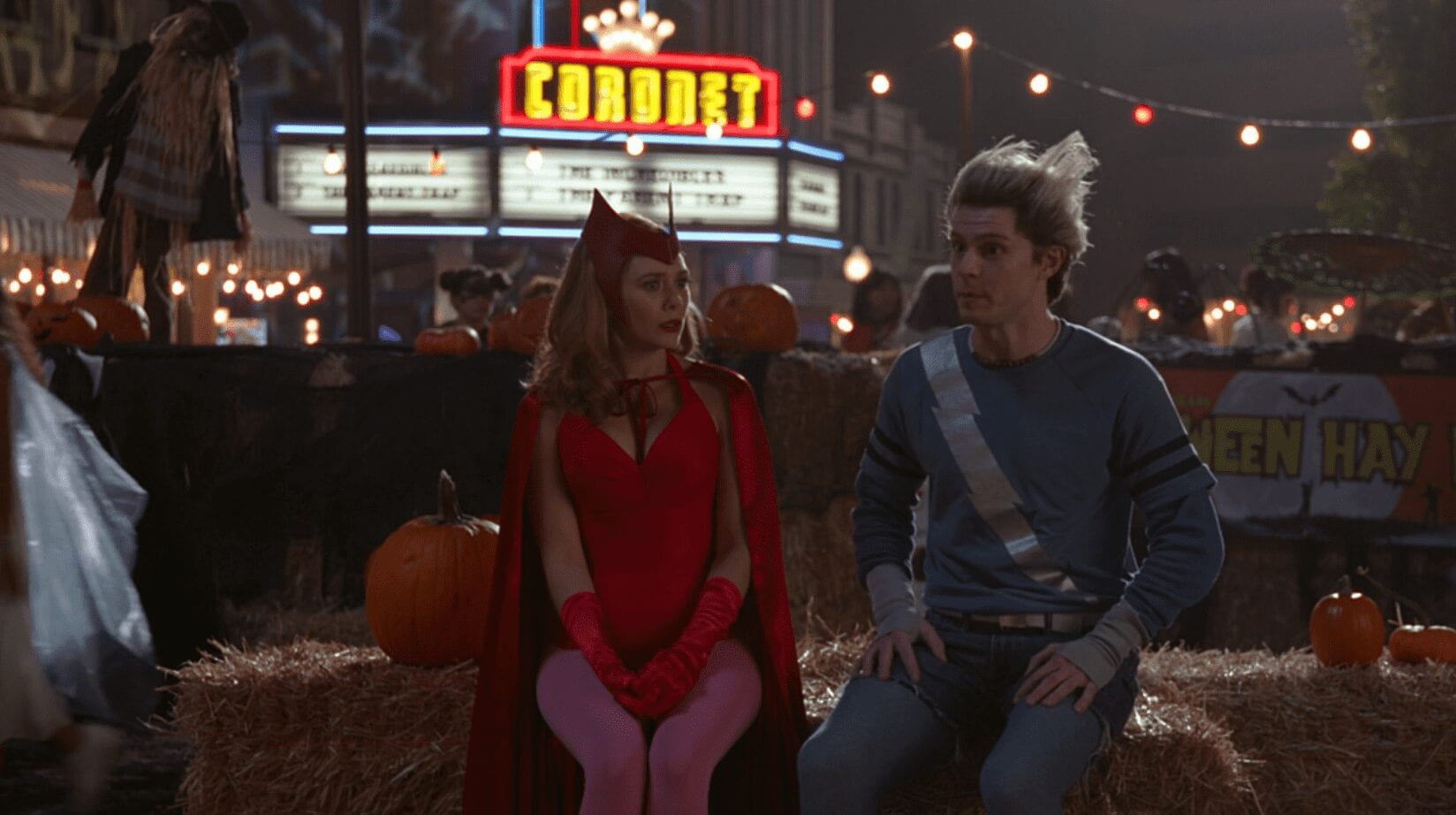 Outside of Westview is where “All-New Halloween Spooktacular” falters. Monica, Darcy, and Jimmy Woo make their displeasure with SWORD known, and the director kicks them out of the camp, so… they knock out two guards and stay put. Isn’t that too easy? SWORD doesn’t have anyone patrolling the tents and buildings? Their hiding place is so extraneous that not one agent walks in while they’re hacking into all the super-secret computer files? Nobody makes sure the people they just expelled are really gone? I know government is generally incompetent, but this is a little hard to swallow. But, while I wish they didn’t make SWORD look like a bunch of idiots, I’m enjoying the darkening of the new spy agency. Like SHIELD before them, SWORD is filling the role of the corrupt bureaucracy that seeks to control all the sci-fi stuff, and the good people working for them are slowly beginning to realize it. This gives Monica, Darcy, and Jimmy more to do, as well as a more dynamic role than just being cogs in a machine.

What they do next will be fun to see because “All-New Halloween Spooktacular” ends on a killer note. Sensing Vision about to die, Wanda saves her husband by extending the parameters of her hex beyond Westview, engulfing the camp and all the SWORD agents who couldn’t get away with the director, plus the three outcasts. Now, the few people who knew about Wanda’s spell are caught in it, and the guy who escaped has made it clear he’s willing to kill Wanda – and God knows who else – to complete whatever his true mission is. WandaVision manages to raise the stakes every week, with greater consequences stemming from each new development. That I don’t know what comes next, where this is going, or even what’s really going on is one of the best parts of the show, mainly because it never feels like a cheat, like the creative team doesn’t have a plan. They certainly do, and they’re unfolding it expertly. There are three episodes left, and the suspense is electrifying.

WandaVision never stops impressing me. “All-New Halloween Spooktacular” clarifies parts of the story while complicating others, and makes the supporting characters from outside of Westview more interesting. Some plot holes from the SWORD camp dampen it a little, but it’s another great episode that leaves you hungry for next week.