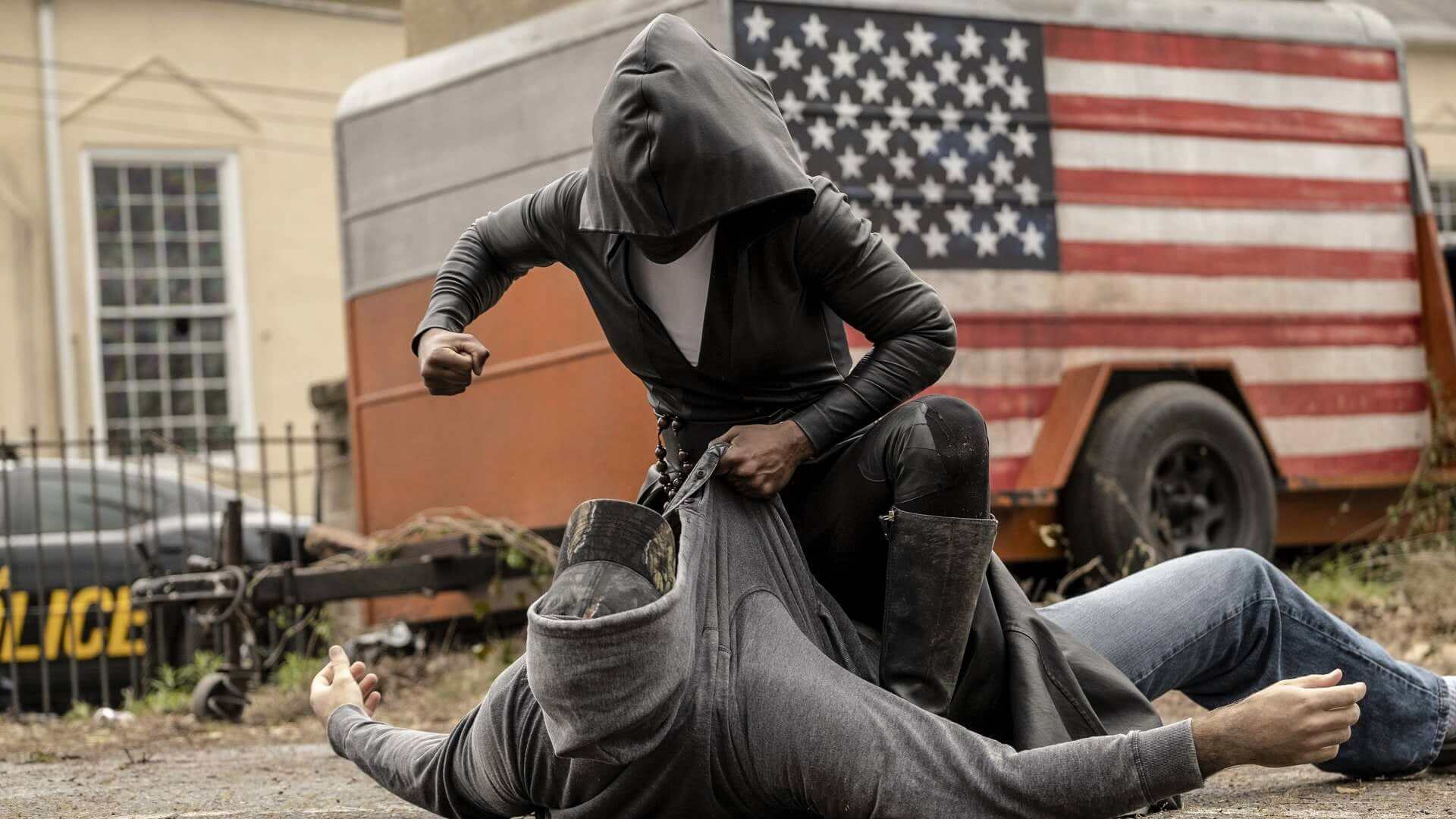 In a strange way, I’ve been looking forward to the next episode of Watchmen all week. After last week’s debacle, I was morbidly curious to see if Damon Lindelof and co. made any course corrections between the pilot and episode 2, “Martial Feats of Comanche Horsemanship.” Perhaps it’s a bit naive, but I really want this show to work and live up to its acclaimed auspices.

“Martial Feats of Comanche Horsemanship” begins as several people are using their typewriters when a German Commander asks to see one of them and to bring their typewriter. As he dictates a letter, the scene transitions to a bunch of World War II soldiers, then does so again to a child, only to end on the old man named Will from last week as we return to the final scene from the premiere. Abar takes him to the bakery, and after letting out some anger over her boss’s death, she changes into her Sister Knight costume and questions Will about why he killed Crawford. He answers that he has telekinetic powers like Dr. Manhattan. Getting nowhere, Abar gets a page about her team finding the chief. After a brief scene at a newsstand, we go back to Sister Knight as she returns to the scene, a plethora of law enforcement officers scattered throughout the area. Looking Glass gets in the car and begins to interrogate her, only for a communist named Red Scare to start beating a suspect in front of them. From there, “Martial Feats of Comanche Horsemanship” flashes back to the night Abar was shot. She wakes up in the hospital three days later, with Judd telling her that her partner was killed. As he apologizes for letting her down, we return to the present, as they take Judd’s body away. The cops decide to head towards a Kavalry hideout, much to Sister Knight’s chagrin. It doesn’t take long before she succumbs to her anger and beats one of them up. Still in possession of the coffee cup she gave Will, she goes to find out who Will is, but can only check if he’s eligible for Redfordrations.

As Abar returns home, she finds a relative of her adopted children waiting for her, saying that it’s his day for visitation. She sends him away with a check. Abar talks to Cal about what Will said and then tells her son about Judd’s death. From there, we see various characters, from Looking Glass to the Kalvary, watch American Hero Story, prefaced by a myriad of warnings about the content. We get a glimpse of what that show looks like as Hooded Justice stops a crime in a convenience store while describing who he was before and who he is with the mask. The words serve as a voiceover as Abar goes to visit Jane, meeting Senator Joe Keene in the process as he offers her whatever resources she needs to find who killed Crawford. She declines, saying she’s retired. Feigning a fainting spell, she looks in his closet and finds a Kavalry Hood, something about which she later questions Will, but gets no answers. “Martial Feats of Comanche Horsemanship” then cuts to the Lord of the Manor as he rides onto the screen again, taking a bite of an apple and squeezing it until it’s nothing. He and his servants begin getting ready for the play, and we quickly realize this is the story of how John Osterman became Dr. Manhattan. His manservant is set on fire as “Dr. Manhattan” is lowered beside the chamber. One of his assistants asks if the body of Mr. Phillips in the cellar with the others. Abar returns to see Will and, after an argument, she gets a call about Will’s DNA, which reveals that she is his granddaughter. Will tells her he wants to show her where she comes from. She won’t hear it and arrests him for Crawford’s murder, only for him to be rescued, a magnet dropping on the car and carrying it away. 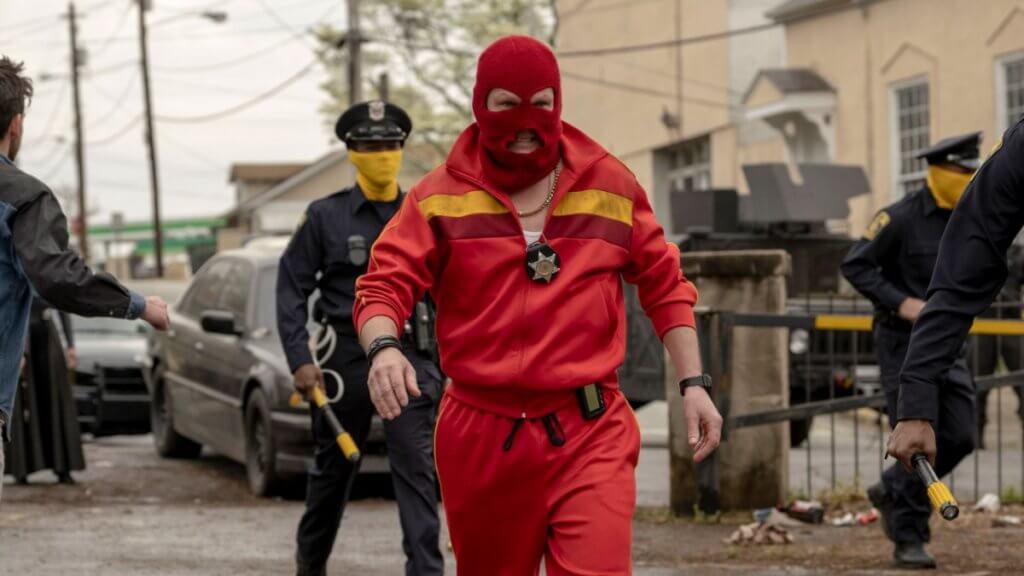 “Martial Feats of Comanche Horsemanship” is, like the previous episode, littered with fine performances. Regina King is great as Angela Abar, and if this show was better, I could definitely see Sister Knight becoming an icon on the level of any other Watchmen character. Unfortunately, King is once again saddled with a poor script that is only marginally better than last week’s. Jeremy Irons is also excellent once again and does a lot with what he is given, which amounts to little more than another glorified cameo. Louis Gossett Jr. also does a great job as Will here, and although he isn’t on screen long, he makes a lasting impact and commands the screen whenever he is. I only wish these actors had better material to work with, and a lot of that comes down to writers Nick Cuse and Damon Lindelof. While the two of them do a marginally better job with moving the plot forward in this episode, the show is still relying on characters making foolhardy decisions and plot contrivances that ultimately devolve into the cliched and predictable, a luxury that TV cannot afford in the age of streaming. That being said, the music serves as a bright spot, elevating the otherwise mediocre show, which, this week, is aided by director Nicole Kassell, who holds on the quiet moments and gives Abar’s arc far more weight and pathos. The camera lingers on her as she holds onto her two father figures, allowing us to feel something for this character other than bewilderment.

“Martial Feats of Comanche Horsemanship” is another subpar episode of Watchmen, despite being marginally better than the premiere. Regina King, Jeremy Irons, and Louis Gossett Jr. give great performances amid a poor story, anchored by great music and exemplary direction by Nicole Kassell. After seeing this episode, I’m convinced that there’s a good show in here somewhere, but I’m simply not seeing it yet. Here’s hoping Watchmen gets better in the coming weeks because Alan Moore’s work deserves better than this.

"Martial Feats of Comanche Horsemanship" is another subpar episode of Watchmen, despite being marginally better than the premiere. Regina King, Jeremy Irons, and Louis Gossett Jr. give great performances amid a poor story, anchored by great music and exemplary direction by Nicole Kassell.