REVIEW: Watchmen – Season 1, Episode 4 “If You Don’t Like My Story Write Your Own” 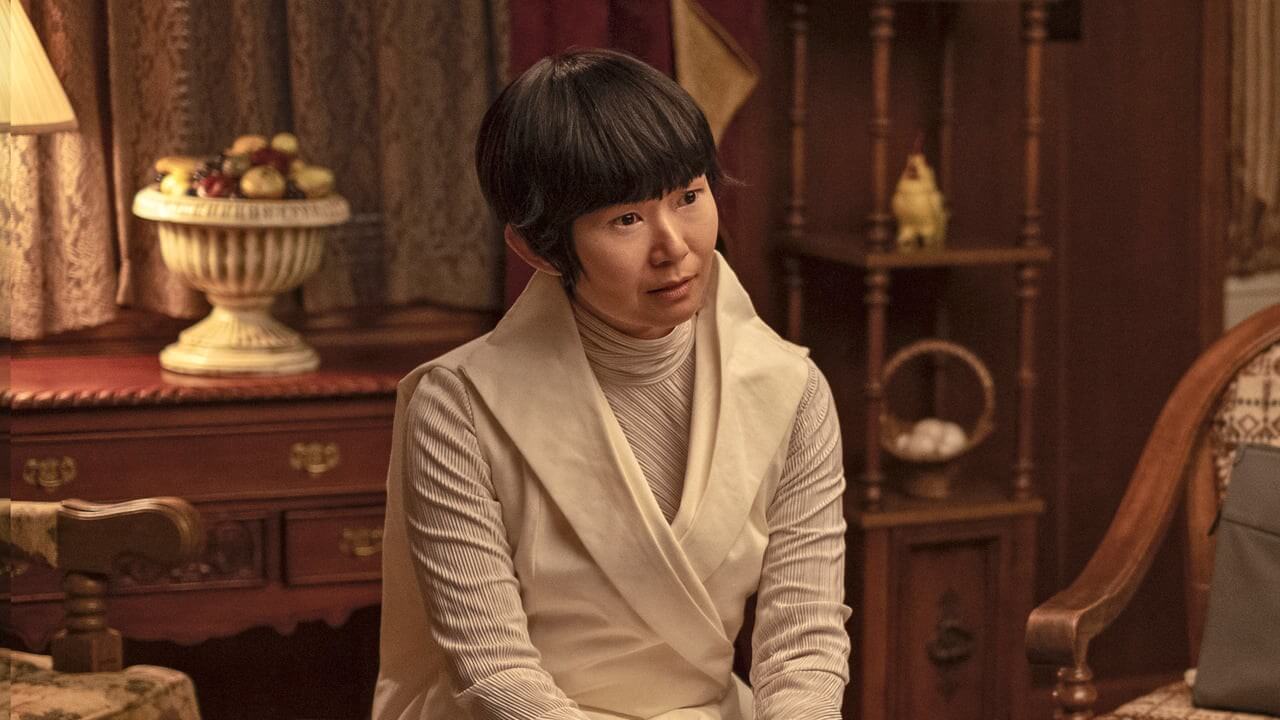 This week’s episode of Watchmen is called “If You Don’t Like My Story Write Your Own” because of course it is. It’s smug, condescending, obnoxious, self-aware to a fault, and both an acknowledgment and dismissal of the audience dissatisfaction Damon Lindelof knew was coming. In other words, it’s the perfect encapsulation of the series so far. After a brief spike in interest generated by Jean Smart, Watchmen is back to its maddening mix of insanity and stupidity, and I doubt it gets much better from here.

Angela gets some answers about her lineage and goes around Laurie to find out more about Judd’s secret life. Laurie takes over the investigation. A wealthy woman named Lady Trieu reveals herself. Angela spots a guy dressed like Ultraman following her. Adrian Veidt talks more about his plan and manages to get less interesting. Oklahoma is given the finger.

“If You Don’t Like My Story Write Your Own” begins with a seemingly random couple who make their living selling eggs by the side of the road (or maybe this is just the wife’s side job; it isn’t made clear because Watchmen cares as much about them as it does anyone else on the show). But a late-night visit tells us that this isn’t just some random couple after all; their property is essential to the construction of the giant clock, and Lady Trieu wants to buy it from them. Lady Trieu is a trillionaire (because billionaires are so passé), known the world over despite her reclusiveness, and she puts the medical research she funded to work for her, offering this infertile couple a baby she had made from one of their attempts to artificially conceive. Of course, the couple agrees and signs over their property. The basic idea behind this scene is a good one, and it may have worked if the ridiculous tone were kept straight instead of being played for laughs. Lady Trieu makes a joke out of the whole situation, and her every line is exaggerated to the point where it feels like a farce. It’s also hard to swallow that she has the technology to do this but keeps it a secret. Why not just have it that the couple couldn’t afford it, but Lady Trieu offers to set them up for the land? Maybe Lindelof is making himself laugh with these bits. Whatever the case, this is only the start of this disaster.

Angela takes center stage once again, and “If You Don’t Like My Story Write Your Own” is not better for it. She’s just not that interesting; I don’t care if Louis Gossett Jr. is her grandfather, partly because he clearly was as soon as the notion was suggested, partly because it’s hard to get invested in her character. Judd’s murder isn’t even particularly compelling anymore because the show is making him out to be just as bad as the Seventh Kavalry, if not literally one of them. Her ineffectualness is even more apparent now that we’ve seen how much better the series would be with Laurie in the lead. But Laurie is relegated to the background this week, and Angela is actually working against her, trying to solve the murder on her own (which she wouldn’t have to do if she didn’t make the idiotic decision to take the confessed murderer away from the crime scene). When she confirms to Looking Glass that she wants to him to hold Judd’s Klan outfit “so the FBI lady won’t find it,” it isn’t the rallying moment they want it to be because “the FBI lady” is a way better, more sympathetic and identifiable character than either of them.

Unfortunately, Laurie isn’t as good in “If You Don’t Like My Story Write Your Own” as she was a week ago. Jean Smart still does what she can and, on occasion, elevates the lousy material, but Laurie doesn’t have much to do, and all her proactive work occurs off-screen.  She talks to Angela’s husband Cal, but we only hear it recounted from him, rather than see it play out. And while she does question Lady Trieu, the scene is more about Angela, and not much of consequence is gained from it – aside from learning that Lady Trieu is connected to Louis Gossett Jr., I suppose. And her scene in the car with Angela and Petey is painfully bad; it’s an exposition dump of exposition we mostly already know, and it’s full of forced, unfunny comedy. Petey recounts Laurie’s parentage like the kind of obsessive fanboy the show hates (as many of these commandeered properties do nowadays), and somehow, the question of why she’d take her father’s last name over her mother’s never comes up; I guess we can assume it never will.

Adrian Veidt spends his small piece of “If You Don’t Like My Story Write Your Own” removing what little fascination his storyline may have held. He confirms that he is, indeed, making clones to use as his disposable wait staff, and continues only to eat birthday cake. He also finally enumerates his evil plan, and it’s quite disappointing. He’s being confined in that estate of his, and he’s developing a catapult to help him escape, but he needs lots of dead clones to test the distance. So the man who created genetically manipulated animals – culminating in a giant squid monster that destroyed Manhattan and, for some reason, makes it rain baby squid in Tulsa, Oklahoma – is now trying to develop a catapult? And whoever is keeping him prisoner (presumably either Doctor Manhattan or Lady Trieu) put him someplace where he could escape via a catapult, which they gave him the means to build? And they’re letting him plan his escape, but they take special care to make sure he doesn’t kill any buffalo? I’m sure we’re supposed to “just go with it,” but this is a little far into the show for nothing to make sense. 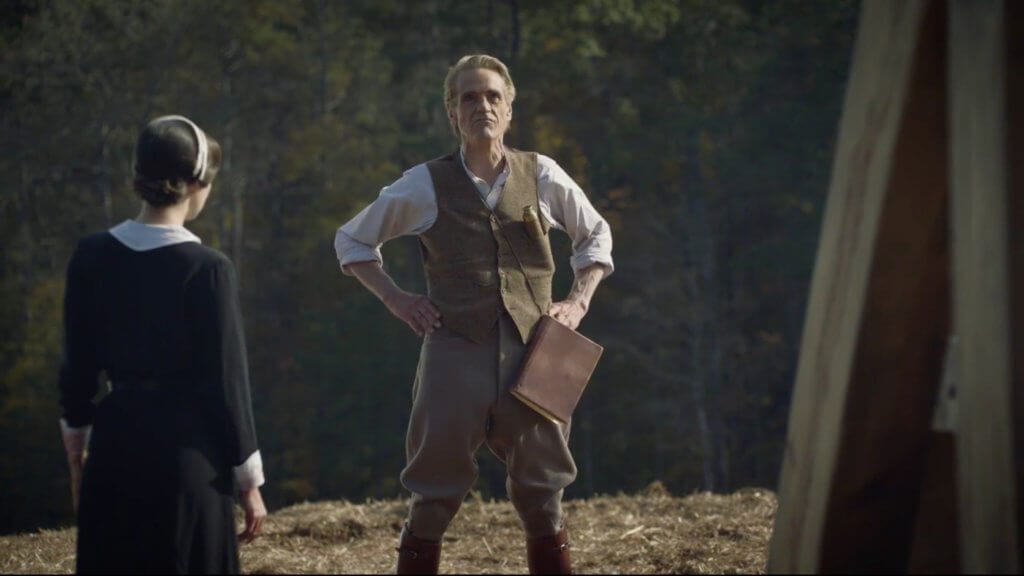 None of the other tidbits in “If You Don’t Like My Story Write Your Own” are of particular interest either. Louis Gossett Jr. is working with Lady Trieu, for whatever that’s worth. They’re building a clock, which prompts Gossett to mutter “Tick tock” a few times before the credits roll. There’s more of that “truth takes time” nonsense left over from Alias as the reasoning behind why he doesn’t just tell Angela what’s going on with him. Speaking of whom, Angela is followed by a guy who looks like a Halloween party attendee dressed as Ultraman; this is just another mystery we’re supposed to put on the backburner, but I can’t imagine anyone caring. Looking Glass suggests that Judd was a racist because “He was a white man in Oklahoma;” aside from insulting the bulk of an entire state to score woke points at Hollywood cocktail parties, I guess this is a way of having the other white male main character “admit” that they’re all bad guys. The teaser for next week makes it seem like Looking Glass will have a bigger role, and all I can do is feel bad for Tim Blake Nelson, another good actor caught in Watchmen’s tractor beam of stupid.

“If You Don’t Like My Story Write Your Own” erases what little progress Watchmen made last week and returns it to the mess that is its normalcy. The characters – both old and new – remain dull and/or silly, the plot doesn’t advance much, and the actors can’t overcome the nonsensical burden of the script. What happens next probably doesn’t matter.

Watchmen – "If You Don’t Like My Story Write Your Own"

“If You Don’t Like My Story Write Your Own” erases what little progress Watchmen made last week and returns it to the mess that is its normalcy. The characters – both old and new – remain dull and/or silly, the plot doesn’t advance much, and the actors can’t overcome the nonsensical burden of the script.