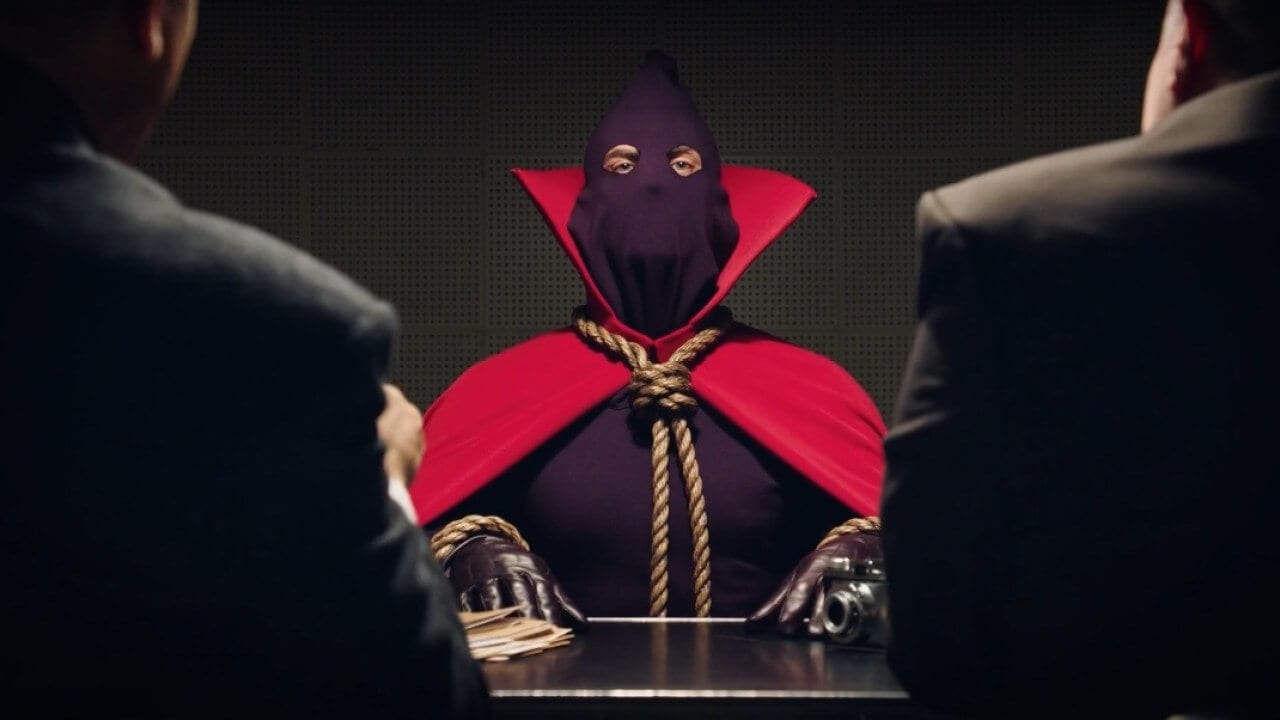 “This Extraordinary Being” is a tough nut to crack. It has what could have been a fascinating story if it existed in a vacuum. Unfortunately, it’s a Watchmen story, and it retcons parts of the Alan Moore/Dave Gibbons comic book that Damon Lindelof claims he so reveres to fit its narrative. Stilted dialogue, obvious commentary on current events, and some inconsistent plot elements don’t help either. But, on the plus side, it’s much less Angela-centric than I thought it would be.

Under the effects of the Nostalgia pills, Angela walks through her grandfather’s memories, from his days as a young police officer to a secret life the world never truly understood, while he tries to smash an evil group of Klansmen trying to enact a horrifying plot codenamed “Cyclops.”

Angela Abar begins “This Extraordinary Being” locked in a jail cell after being betrayed by Wade. As she starts to succumb to the drug, Laurie stops by and gives her a brief history of Nostalgia’s invention and evolution as an illegal narcotic. It’s less than reassuring that Watchmen has decided to take its best character and relegate her to the series’ exposition deliverer. Also, shouldn’t Angela know all of this? She’s a cop, isn’t she? You would think she’d know what a headline-grabbing drug like Nostalgia does. It’s also one of Watchmen’s less subtle jabs at fans, whom Lindelof must have predicted would be critics of the show, to make the most dangerous drug in the world called “Nostalgia,” and in an episode where he’s about to heavily alter an element of the source material.

That element is Hooded Justice, a member of the superhero team the Minutemen. “This Extraordinary Being” reveals that Will Reeves, Angela’s grandfather and the confessed murderer of Judd Crawford, is actually the legendary masked vigilante, despite claiming to be Doctor Manhattan. As it happens, Will was a police officer in New York City after escaping the Black Wall Street Massacre as a child but was kidnapped and threatened with lynching by his fellow cops when he interfered with the business of the Ku Klux Klan. Wearing the very noose on which he was hung and the mask used to disorient him – as well as a smear of face paint to make sure the public thinks his alter ego is white – Will becomes Hooded Justice, circumventing the racist institutions that failed him. Soon, he comes to the attention of the Minutemen, particularly Captain Metropolis, and becomes a nationally recognized figure, but while his teammates would rather focus on comic-book-style supervillains like Moloch, Will wants to see his investigation through and stop the Klan from enacting their plan to destroy the black community.

What’s frustrating about “This Extraordinary Being” is that it could have been a very effective story. Take out Hooded Justice, the Minutemen, and anything else from Watchmen, and you’re left with the blueprint for a potentially interesting take on the superhero origin, with a character fighting a very real kind of evil, albeit with some comic book exaggerations. But that’s the rub; it is a story set in the Watchmen universe and is about characters from that comic book, and if you’re trying to trade on a brand name to get people to consume your art, you can’t then demand they divorce your art from its source material when they appraise it. Hooded Justice was not black in the comic book, and “This Extraordinary Being” has to jump through hoops to square the circle of making him so. It also makes Hooded Justice secretly gay, which a bit of research tells me is actually a plot point from the prequel comic book series Before Watchmen (which I’ve never read); this does nothing for the plot, and aside from scoring some diversity points, I don’t know why they decided to harp on this so much. Maybe it’s Lindelof’s version of solidarity with another Watchmen continuation that Alan Moore wishes didn’t exist (like the way some of the action scenes are filmed similarly to how Zack Snyder shot the movie; they look great, but it’s a clear nod). Or, perhaps, none of that matters, and Lindelof is using Watchmen as a vehicle to talk about issues he thinks are important. Only instead of just making the characters face a new challenge, he’s changing them, making them fit with the story he wants to tell. Adrian Veidt wasn’t really finished with his plan at the end of the comic; Rorschach is a symbol of white supremacy; Hooded Justice was a black man pretending to be white so he would be accepted by society at large, and his real target was the KKK. It feels cheap and insulting, a way of picking at the bones of a story that was told to completion.

That’s a shame, because if Lindelof had just done something original, “This Extraordinary Being” could have been the introduction to a compelling superhero show. Jovan Adepo is quite good as Will Reeves, and his hurt at the world he’s forced to endure is ever-present beneath his determination to make it better. Even a small moment like his induction into the police department speaks volumes about his shifting emotions, and they always feel natural and sincere. The gay angle is tacked on and unnecessary, but the strain being a vigilante and a crusader for justice would take on a marriage would have worked better if this were a series unto itself. As it unfolds in “This Extraordinary Being,” it’s rushed and inconsistent. June, Will’s wife, goes from encouraging him to become a superhero to blaming him for continuing to be one, with no apparent reason for her change of heart. She gets mad at him for wiping the white paint off of their son’s face while blaming him for being the cause of the kid’s desire to fight crime behind a mask. It could be interpreted that she’s really talking about his homosexuality, but there’s no indication that she even knows about it. The scene where she leaves him is one of those ridiculously clichéd “You care more about your job than us!” power moments, but it isn’t earned in the least. And now that Watchmen is back in the present, we’ll never get any more insight into this. Will’s backstory is one of the many subplots that would’ve made a much better central narrative than Angela’s investigation.

Ultimately, “This Extraordinary Being” has a minimal impact on the series. We know who Will is, and it’s certainly unexpected (because it doesn’t fit with Watchmen the comic book at all). But there’s nothing new about Adrian Veidt, and while Lady Trieu shows up at the end, she has little to do with the plot.  Will is now using Cyclops for his own purposes, which would be a nice way to tie him into the police state tactics of the superhero cops, but it doesn’t look like the show’s nearly as interested in that as it is in race. Judd Crawford’s death is finally shown, but questions remain. Did Will kill him because he suspected Judd was a Seventh Kavalry member or is there something else to it? Judd insists that Will doesn’t know the whole story, so I guess there’s more to come on this front (outside of the obvious parallel drawn between Judd’s father’s Klan outfit and the Confederate statues, as though they’re nearly the same thing). None of it adds up to much, and while “This Extraordinary Being” works okay as a singular narrative, it’s hollow as part of Watchmen.

Watchmen – "This Extraordinary Being"