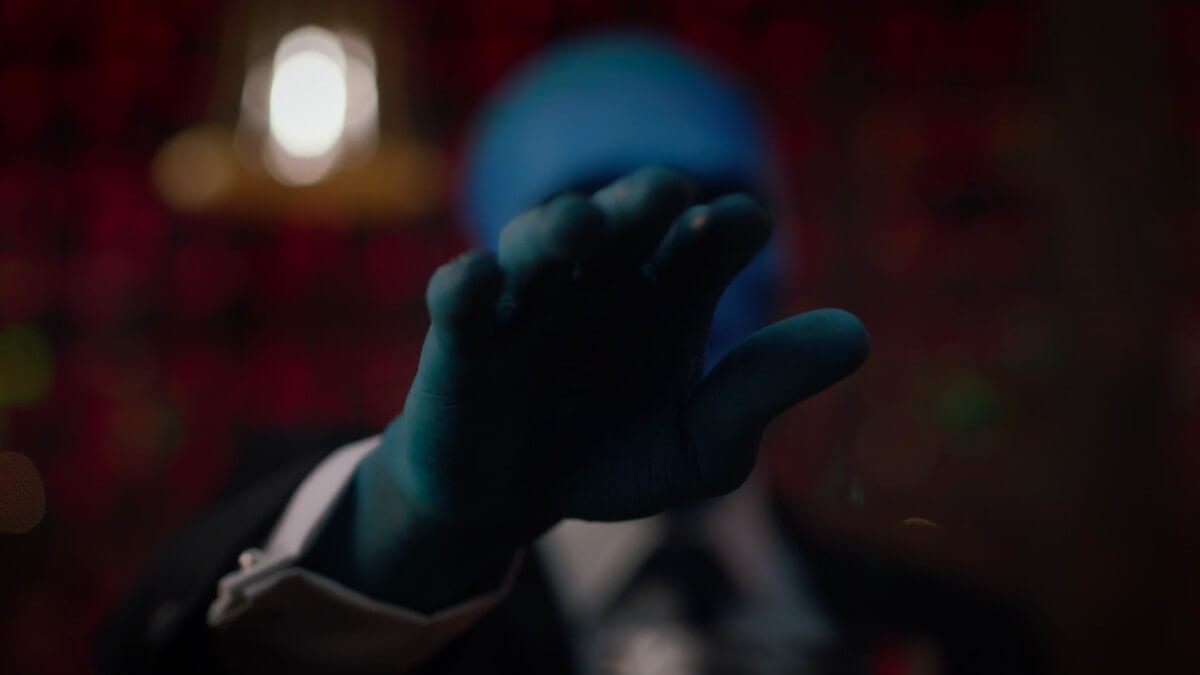 “A God Walks into Abar” fills in plenty of Watchmen’s blanks, particularly the ones last week’s episode created when it revealed that Angela’s husband Cal is actually Doctor Manhattan. There are still elements that don’t make sense, and Angela remains a flat character, but it’s an entertaining installment that’s just as trippy as one would expect a story about the former Jon Osterman to be.

The events leading to the beginning of the series and Doctor Manhattan’s reawakening are revealed, starting with his meeting Angela in a bar in Vietnam and including his involvement with Will Reeves and the circumstances surrounding Adrian Veidt’s imprisonment.

“A God Walks into Abar” (do you think they gave Angela that last name just so they could make this pun in a title?) immediately announces that this will be a Doctor Manhattan episode, as the man-made god walks through the streets of Vietnam wearing a mask of himself until he happens on a bar where Angela is having a drink. He grabs a couple of beers and approaches her, insisting that he loves her, that they will be together, and that she will have dinner with him the next night. Having never met him – and not believing he’s the real Doctor Manhattan, as they’re surrounded by people painted blue to celebrate the day Vietnam became a state– Angela isn’t inclined to believe him. But Jon begins telling her things a stranger couldn’t know, such as that she’s having a drink not just on the commemoration of Vietnam’s entry into the United States, but on the anniversary of her parents’ death. It’s a familiar setup, and one that will frame much of the episode; it also mostly works, which is surprising, as many of the more routine elements of Watchmen have been very ham-handed. We know from the comic that Doctor Manhattan acts like this, cryptically communicating with people because he knows how events must unfold. In fact, Doctor Manhattan may be the character the show gets most right. That’s a relief because everything that follows hinges on him.

Doctor Manhattan spends the entirety of “A God Walks into Abar” as he must: in the past, present, and future simultaneously. He is a man out of time because he is in every time, and a lot of the episode doesn’t make sense until later as a result. We are cast in Angela’s shoes, listening to inanities from Jon and trying to wrap our heads around them, only to find out much later what was truly going on. For example, his declaration of love for her initially confounded me; why is Angela so special to him? She’s never really done much of anything to make her feel like she could be the love of Jon’s life. But in the climax, when she’s ready to fight a hopeless battle to save him, he finds the moment when he falls in love with her – the moment he didn’t think existed, but that Angela and we knew must. Just like when he finally understood how special Laurie was in the comic, Doctor Manhattan is still learning from us smallminded mortals. And yet he has much still to teach us, such as the beauty in fleeting happiness.

It’s that hope for fleeting happiness that leads Jon to effectively become mortal, to take on Cal’s identity so he can be with Angela, even though he knows it will only last ten years. He knows his life with her will inevitably end in tragedy, but he’s willing to bear it because he can’t deny himself that joy. Despite his godlike power, Jon is as human as we all are, and he wants to love and be loved, no matter the cost. This puts him in stark contrast to Adrian Veidt, a man who is offered an eternity in the only place he considers heaven, but finds he cannot stand to be surrounded by perfection. Veidt’s plan from the comics has seen as many failures as it has successes, with the world governments continuing to stockpile nuclear weapons despite his squid-induced peace. Mankind will never allow the utopia of which Veidt dreams to become reality, but Doctor Manhattan has already created it. As payment for Veidt letting him become human, Doctor Manhattan will let Veidt become a god. But godhood is boring, so Veidt finds, because his genius is no longer needed, and what was supposed to be paradise quickly turns into his prison. There’s a certain satisfaction that comes from Veidt being tortured by getting exactly what he always wanted, and his wanton murder of the clones he’s been creating indicates that his ideal world only reveals him as the monster he truly is at heart. He and Doctor Manhattan represent two different, though intrinsically linked, views – or sides, depending on how you view these matters – of God. Veidt is the callous creator who destroys at will those who exist only to serve him, while Doctor Manhattan is more concerned with his own whims than with those who need him. But both are indifferent, and their subjects suffer for it.

While it certainly hasn’t been perfect in this regard – this is the first time Veidt has been anything but excruciating to watch since the series premiere – “A God Walks into Abar” illustrates that Watchmen is much better when sticking with the characters from the comic. Veidt and Doctor Manhattan are both fascinating here, and they feel in keeping with their origins, just as Laurie was previously the best part of the show. Against these two, Angela doesn’t stand a chance. She’s so boring and tedious, not seemingly having much of a reaction to anything beyond putting on a tough-girl face and cursing. You never get the sense that she loves Jon because she’s always got her stone face on, and while his story is engrossing, she seems to be doing all she can to grind it to a halt so she can strut for the audience. None of the new additions outside of Looking Glass has been the least bit compelling, and while, ideally, they just would have been better-realized, “A God Walks into Abar” leaves you wishing they’d been excised in favor of the returning players. I know I would have preferred to explore Laurie’s efforts to free Dan Dreiberg from prison, for example. In light of this, it’s almost funny to watch Angela realize that she’s little more than a tool of fate, setting the story into motion herself after it’s started by inadvertently telling Will about Judd Crawford. Making Watchmen primarily Angela’s story was a mistake and a waste of what could have been a much more intriguing show. 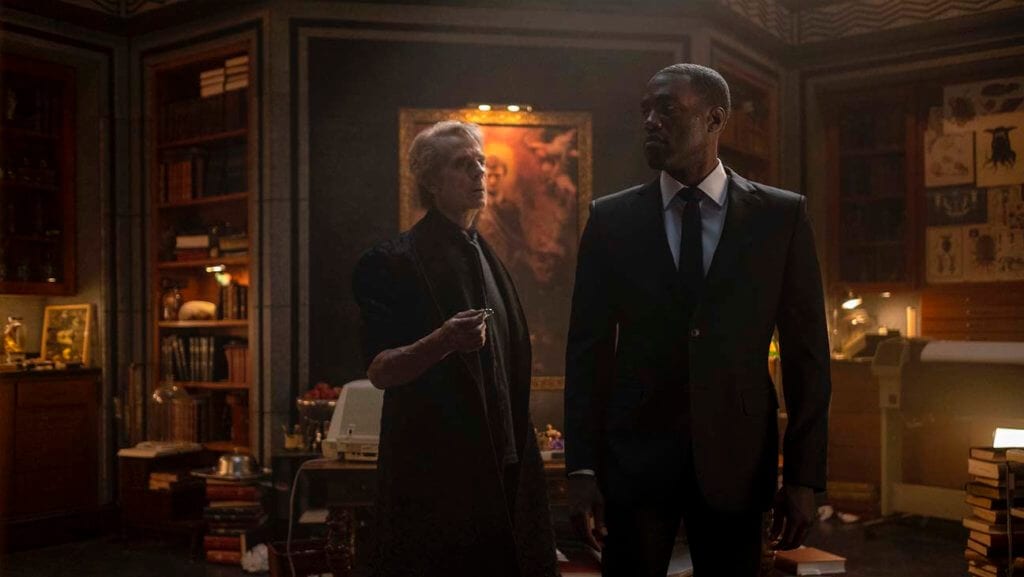 There are still some things that don’t connect in light of “A God Walks into Abar,” however. I have no earthly idea why Doctor Manhattan lets himself be taken down by the Seventh Kavalry’s weapon at the end. He’s wiped out their foot soldiers and has complete control of the situation, but he just stands in the beam’s way? I hope there’s a reason for this beyond him seeing it happen. And why did Veidt not mention the Kavalry if he is responsible for their creation? He indicated in “Little Fear of Lightning” that the events of the comic were merely the first phase of his plan, but when Jon visits him, he acts as though it’s a complete failure. In leaving for Europa, didn’t he abandon his plan before it really kicked into gear? And it’s entirely too convenient that Veidt had created the very instrument Doctor Manhattan needs to become a human; aside from plot convenience, this was done merely to set up a reference to his famous line from the comic book, and it’s too hokey to work. The explanation for Veidt’s imprisonment still doesn’t make sense of the bizarre happenings on Europa that we’ve seen throughout the season or the Game Warden’s declaration that the trial has been going on for one hundred years. And I have no idea how all of this is going to be satisfactorily tied up in one episode.

But after this week, I’m eager to see them try. “A God Walks into Abar” is a fascinating episode that answers many of Watchmen’s lingering questions while giving the comic book characters worthy portrayals. Angela is still dull, and a couple of plot holes (one of which may be smoothed out next week) put a damper on things, but this is a good episode of what clearly could have been a much better show.

Watchmen – "A God Walks into Abar"

“A God Walks into Abar” is a fascinating episode that answers many of Watchmen’s lingering questions while giving the comic book characters worthy portrayals. Angela is still dull, and a couple of plot holes (one of which may be smoothed out next week) put a damper on things, but this is a good episode of what clearly could have been a much better show.