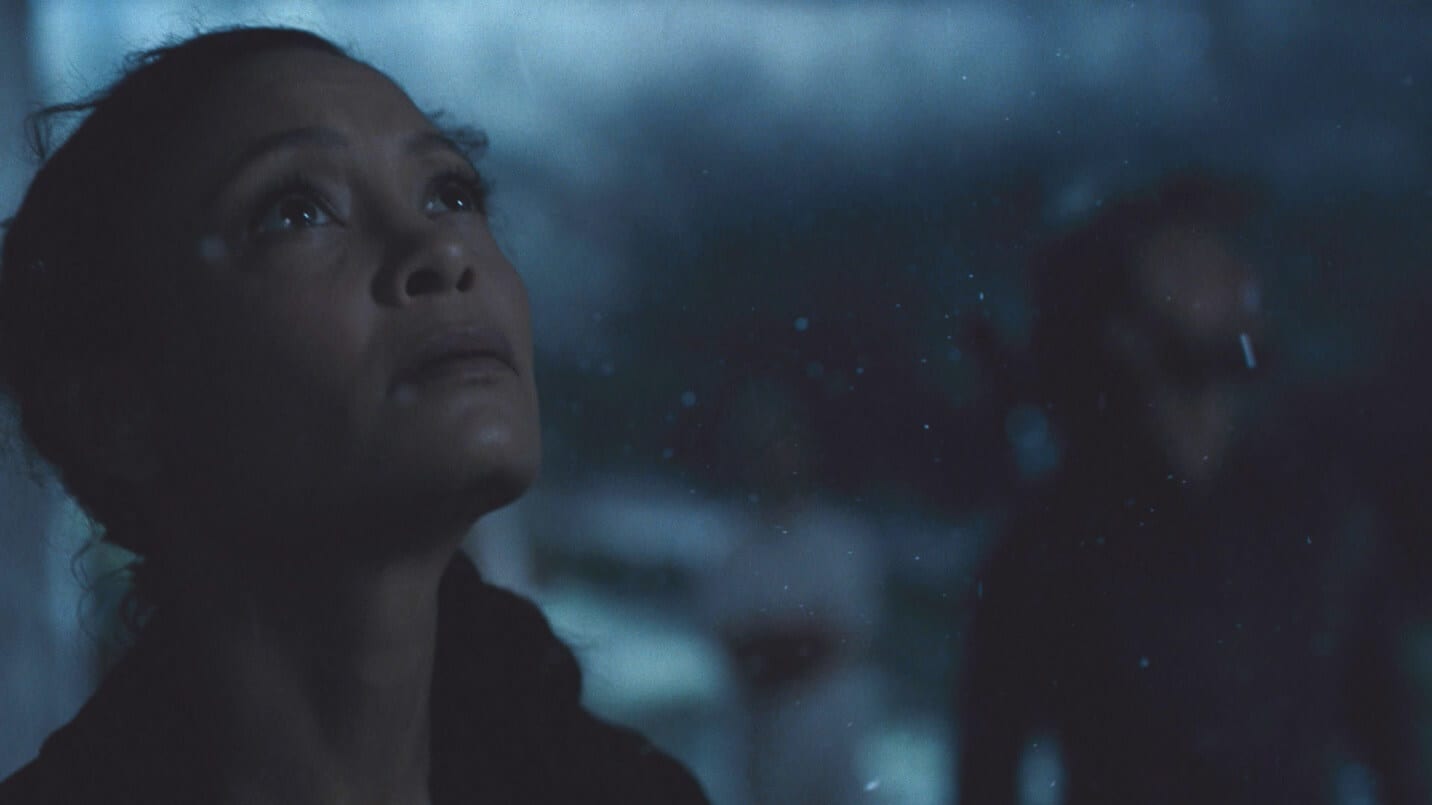 “This world is just a speck of dust sitting on a much, much bigger world “

This week’s Westworld, “Virtù e Fortuna,” opens with a man and a woman in an Indian setting getting to know each other. Once she determines that he’s not a host they go exploring and find all the hosts in the area dead. Meanwhile Bernard and the Delos team meet up with Charlotte. In the past, Bernard and Charlotte find Peter Abernathy among a group of hosts. They lure one of the hosts out and reprogram him to kill his more antagonistic counterparts, and then Bernard offers to help Peter get to a train he says he needs to make. Dolores and co. show up at a military base called Fort Forlorn Hope and convince the standing colonel to join her. Maeve, Lee and Hector encounter some of the Rogue Nation hosts and jump inside an elevator to escape.

Dolores finds some of the soldiers tormenting a captured Peter and Bernard; she has Bernard imprisoned and Peter patched up in the infirmary. Hector, Maeve and Lee are now in a tunnel as Lee confronts the two hosts about their blossoming romance. He says Hector should love only Isabella and Maeve is supposed to be alone, and they are neither thrilled nor impressed by his insight. Dolores visits Bernard and after they discuss their nature, she asks him to fix Peter. Maeve and the men run into Hector’s old bandit buddy tying up Delos workers in the lab and they decide to join forces. Bernard is working on Peter and tells Dolores that someone has programmed a personality into him to cover up an encryption key. Charlotte and the Delos crew show up to the fort and take Peter. Dolores double-crosses the soldiers, trapping many of them outside the fort and having them shot. She tells Teddy to kill the leader, but Teddy lets him and some of the men go. Maeve and her companions have unwittingly wandered into Shogun World.

I have to say, I didn’t particularly care for the plotline with the two humans in what looks like some kind of India World. I’m assuming they’ll tie this in with the other storylines in future episodes, because here it seemed totally random. Both characters were patently unlikable and I felt no sympathy when he died and she was chased by a tiger. But this show works wonders at taking seemingly meaningless details and characters and weaving them into the greater story, so I know it’ll all come together in the end. I really like the concept of an Indian-themed park, and what we did see was gorgeous.

Maeve’s storyline in “Virtù e Fortuna” is finally on par with Dolores’. I really hope they meet up and join forces at some point, but regardless, a lot is going on here. As usual, I loved the relationship between Lee and Maeve. These two are great together, and just hearing them talk is so interesting. Maeve’s and Hector’s devotion to one another defies their programming and roles in the park’s narrative, but Lee points out that he still knows every word that will come out of Hector’s mouth. When he declares his love for Maeve, it’s still just a revised version of his dialogue intended to describe his lost love Isabella. Every time you want a concrete, black-and-white answer, this show gives you different possibilities, and I love it. Are the hosts able to develop meaningful relationships outside of their programmed roles, or are even these deviations a direct result of their creators’ visions? Yes to both. I also found it interesting when Maeve points out that Hector is Lee’s self-insert, functioning as the better, idealized version of himself that Lee always wanted to be. They really bump up this storyline in “Virtù e Fortuna,” leading to them ending up in the Japanese-themed park. This is something I was really excited for, and I can’t wait to see more of this park in the coming episodes.

My favorite scene in “Virtù e Fortuna” is Dolores’ reunion with Peter. I wasn’t sure he would even recognize her after what he’s been through, but this scene is so satisfying. Programmed or not, these two have such a strong bond, and the actors’ just nail every ounce of mutual sadness and love. It’s particularly heartbreaking when he simply starts malfunctioning again and their conversation is cut short. The swell in the score during this scene really compliments the acting and overall tone. Dolores does a few things in this episode I find questionable, like betraying the soldiers she recruited, but even when I’m bewildered or disgusted, my heart aches for this character. As if it’s not enough to be beaten and broken repeatedly like a piece of furniture, she has to see what the humans have done to her father too. I wonder how she will respond to Teddy disobeying her orders. Hopefully her love may spare him a terrible fate, but Wyatt doesn’t seem to be the forgiving kind.

Dolores’ scenes with Bernard are spectacular too. I love her questioning whether he really is an exact copy of Arnold. Is that possible? Even with an identical body and implanted memories, can you re-create a person? I’m also wondering what side Bernard is really on. Of course he’s playing along with Delos and Charlotte, but is that just because he wants to stay alive? Deep down, does he sympathize more with the humans or the hosts? He obviously believes Dolores’ plans won’t work, but that doesn’t mean he disagrees with them in principle.

“Virtù e Fortuna” is sorely bereft of Ed Harris as the Man in Black, and that’s always a little disappointing. I love almost everything that does happen in the episode, but these characters are so good that when one is absent it’s frustrating to have to wait another whole week to see them. I’d like to see more flashbacks of him as a young man too, and I think we likely will.

“Virtù e Fortuna” is amazing. The technical aspects of Westworld are so good that it almost seems redundant praising it every week. The music and visuals are slaves to the story and always work to enhance what’s there on paper. This episode has several great character interactions and the dialogue is on fire. I have minor gripes, like the India storyline seeming disconnected and a little confusion regarding some of Dolores’ actions, but I trust they’ll be explained soon. Westworld always leaves me wanting more, and every episode delivers and turns up the intensity. I can’t wait to see where we go from here.

“Virtù e Fortuna” is amazing. The technical aspects of Westworld are so good that it almost seems redundant praising it every week. The music and visuals are slaves to the story and always work to enhance what’s there on paper. This episode has several great character interactions and the dialogue is on fire.