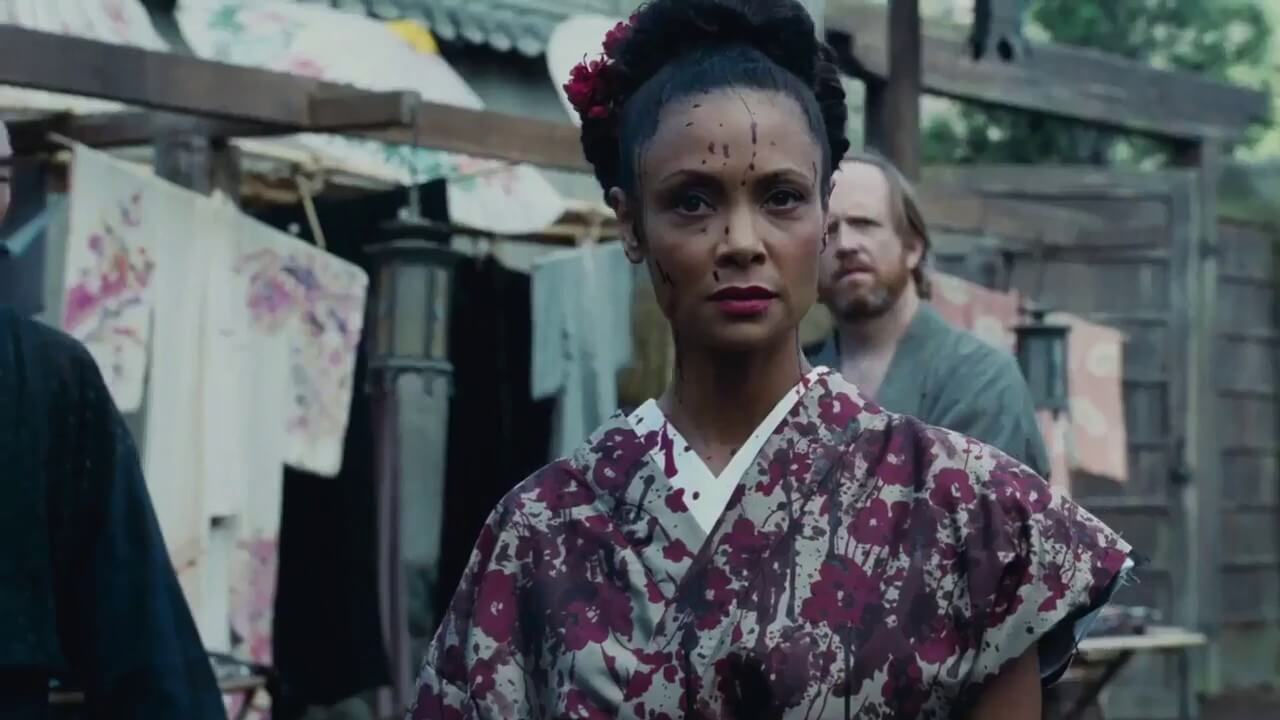 “We each deserve to choose our fate. Even if that fate is death.”

“Phase Space” begins with something familiar: Bernard and Dolores discussing her potential and what choice he should make. However, this time it turns out to be Dolores testing Bernard rather than the reverse. Later, Dolores plays the piano and Teddy enters, insisting that they get a move on. Dolores questions two of her human prisoners regarding Peter’s whereabouts, and when they don’t give a satisfactory answer Teddy shoots one of them, saying that they’ll just find him themselves. Charlotte and Ashley bring Peter in and she sends Delos the message that they have him in hand. The humans drill nails into Peter to keep him in place. Akane mourns Sakura and cuts her heart out. The Shogun’s men reveal that they have Hector and the others in custody, and will only give them to Maeve in exchange for Akane. Musashi the Ronin challenges the leader to a duel for her instead. It looks bleak at first but Musashi wins in the end. William and his daughter seem to be getting on each other’s nerves, as she wants to leave but won’t go without him and he wants to continue playing, but with her out of harm’s way.

Bernard and Elsie discover that the park’s infrastructure is fighting back every time Delos tries to regain control. Akane lays Sakura’s heart to rest at Snow Lake and burns it. She and Musashi elect to remain in Shogun World, but she thanks Maeve for giving her the choice. William’s daughter pleads with him to come home with her, to which he agrees; however, when she wakes up he’s gone. Elsie and Bernard visit the Cradle, a room containing all the data and hosts’ minds for the park. Bernard tells her to put him in, so she extracts his brain, and the next thing he knows he’s in Sweetwater. Maeve and crew arrive at her old home and she thanks Lee for getting her there. Lawrence is shot by a Ghost Nation host, much to William’s shock. Maeve finds her daughter on their old porch and realizes that she has a new mother. The Ghost Nation arrive and kill the girl’s mother. Hector and the rest of Maeve’s crew rush in and kill the Ghost Nation men. Lee pulls out a phone and calls for help, much to the chagrin of Felix. Teddy offers Dolores’ other human prisoner a gun and one bullet, saying that it’s the last of his mercy. Bernard sees Ford.

The scene where Maeve and crew leave Akane in Shogun World further highlights how far Maeve has come as a character. She wants Akane to come with her and to be able to help her, but she’s already given Akane the chance to make choices in her life, which is more than she ever had before. Maeve wants to find her daughter and escape the nightmare that is Westworld, but she wants the same for the other hosts. Dolores talks of freedom but drives her followers like slaves and treats them like chattel, while Maeve doesn’t make any grand statements but treats people with respect in practice. 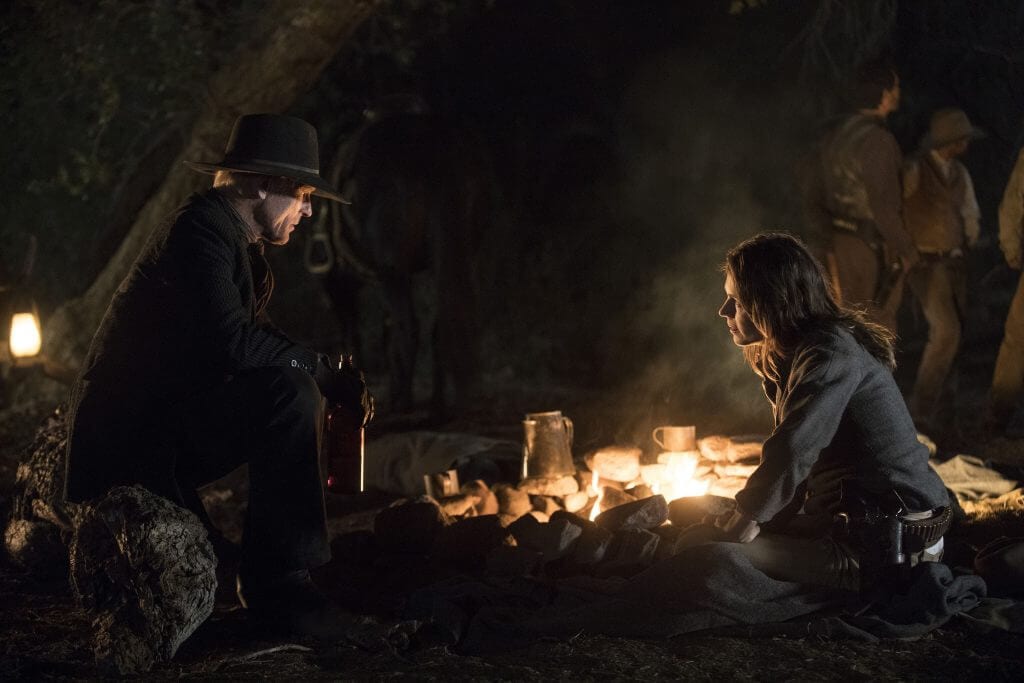 Also great in “Phase Space” are the moments between William and his daughter. I didn’t believe he would really go with her, but Ed Harris is excellent in this scene and it’s easy to see why she believes him. This is the first time we’ve seen Ed Harris’ interpretation of the character show any genuine emotion besides murderous glee or annoyance. Just as Dolores is becoming increasingly deplorable, it seems that the show’s writers are opening William up in new and interesting ways. Could he end up being a neutral, or even good, person? Realistically, probably not, but it’s a fascinating thought. We haven’t seen much of his daughter, but I don’t like her; I can sympathize with her wanting him to go home with her, and her sadness over losing her mother, but her voice and behavior irritate me nonetheless.

I found it really disturbing watching Bernard have his brain extracted. He describes the pain as “just a program,” but man, this is just… gross. Jeffrey Wright really nails the performance here too; it would be hard to know how to act and look when your head is being screwed open and your brain removed, but he definitely had me convinced. I never liked Elsie in season one, but I’m actually really enjoying these two as a duo. In the opening of “Phase Space,” Dolores says she’s testing Bernard for fidelity, and as the viewer, it’s easy to wonder the same thing: do Bernard’s loyalties lie more with Dolores, Elsie, or just with whoever wins? It’s also important to consider that, even if things appear to be adding up, we can’t be sure what sequence these events are occurring in.

Dolores’ changes to Teddy’s code have had quite an effect on him: everything about him in “Phase Space” is different, from his temperament to his speech to the fact that he doesn’t seem to even love Dolores —  or anything — anymore. He even remarks that at one time he never wanted to leave Sweetwater but Dolores changed that, along with his old “weak” demeanor. Teddy wasn’t one of my favorite characters by virtue of getting less focus and being relatively simply, but it is sad to see this change in him. Teddy’s only crimes were being merciful, compassionate and full of love for Dolores and other people. Dolores took something that was beautiful and good and poisoned it, something she is liable to go on doing until this show ends. 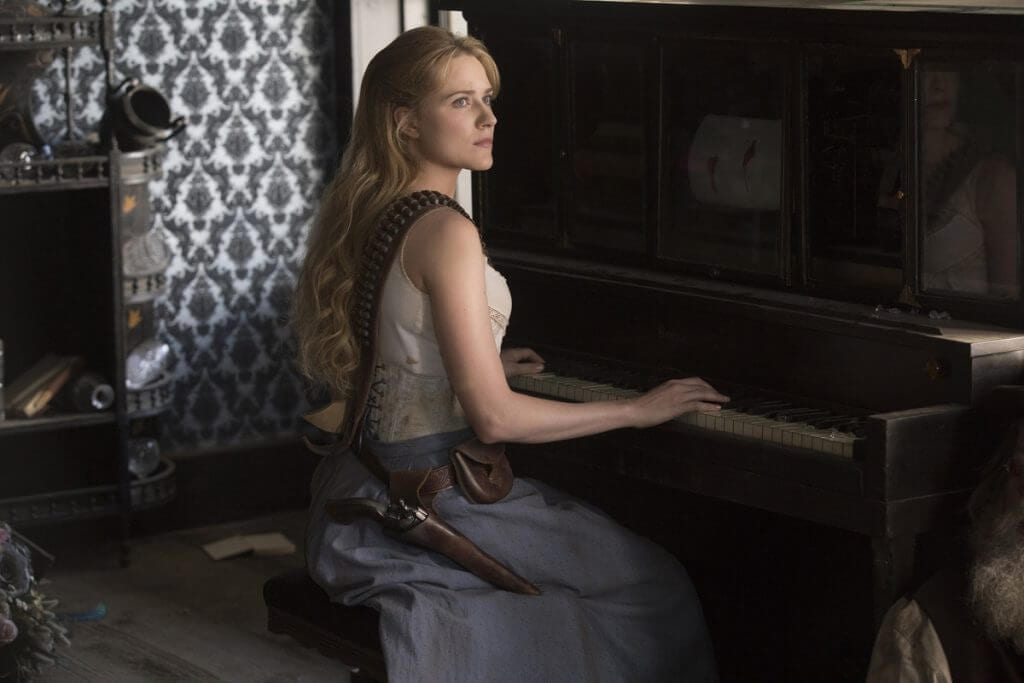 It’s great for Maeve to finally find her daughter, and bittersweet to see that the girl has a new mother who has taken Maeve’s place in the narrative. This is exactly what Clementine went through last week, and it’s really disturbing. The girl is sure to be traumatized from seeing her “mother” murdered by the Ghost Nation, but it’ll be interesting to see how this plays out for Maeve.

“Phase Space” is a really great episode. The acting is amazing all around, there are spectacular special effects, every scene and subplot is engaging and I was always wondering what would happen next. One thing I’ve noticed with Westworld is that I’m never ready for the episode to end. Even by the show’s own astronomical standards, “Phase Space” is a phenomenal episode and I’m thrilled with where the season is going.

“Phase Space” is a really great episode. The acting is amazing all around, there are spectacular special effects, every scene and subplot is engaging and I was always wondering what would happen next. One thing I’ve noticed with Westworld is that I’m never ready for the episode to end. Even by the show’s own astronomical standards, “Phase Space” is a phenomenal episode and I’m thrilled with where the season is going.