"Talking about the end of the world, my dude!" 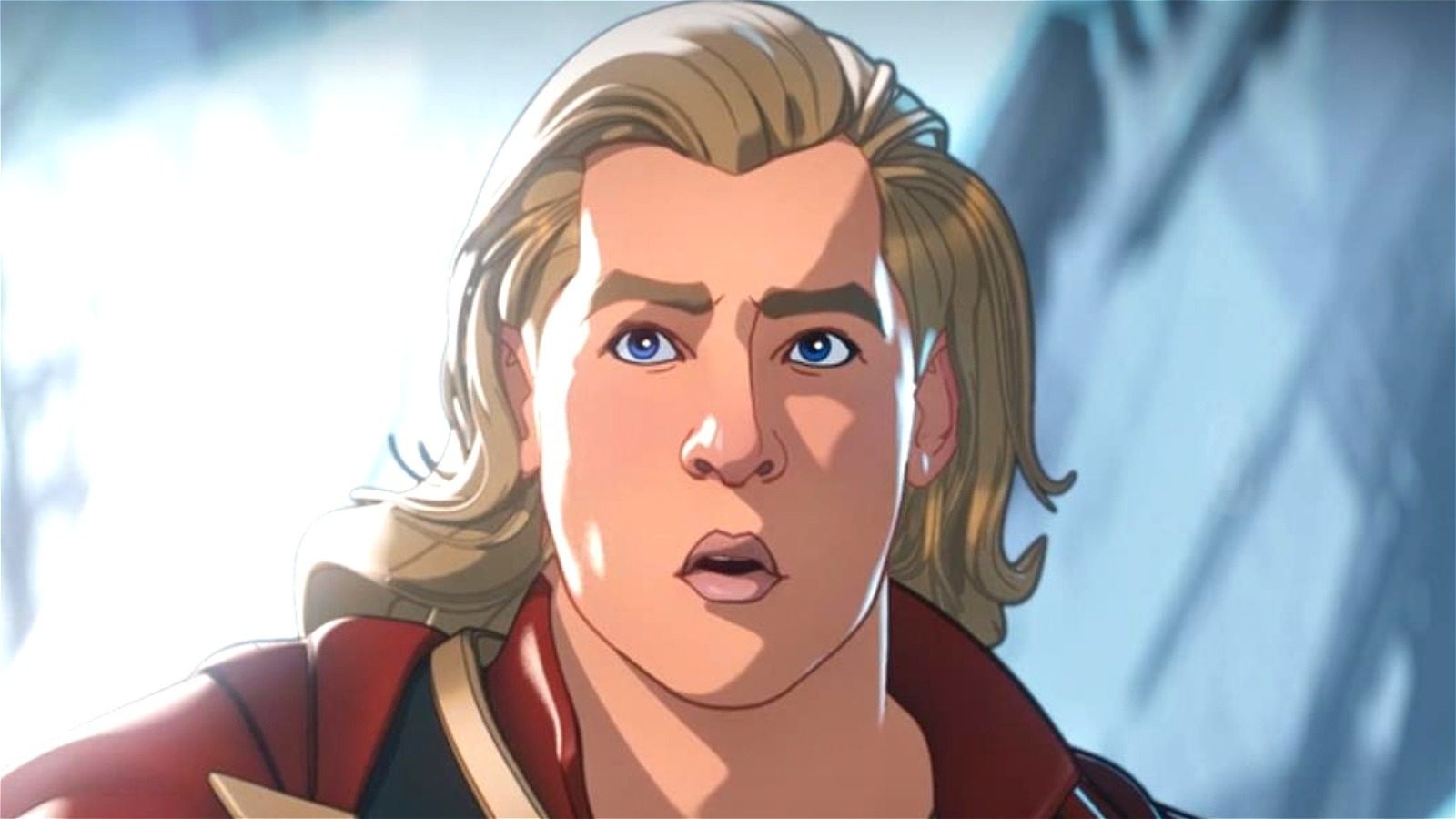 “What If… Thor Were an Only Child?” makes it clear that this animated Marvel series still has some kinks to work out – some very big, very annoying kinks. The worst impulses of the show take center stage this week, where instead of using a diverging timeline to explore the characters, they just do a bunch of wacky stuff and say, “Well, it’s What If…? so anything goes!” This time, they throw in some thinly-veiled social commentary and take a swipe at Marvel fans, just in case you were in danger of smiling for a moment.

Thor, in this universe rendered an only child because Odin returned Loki to Laufey instead of taking him to Asgard, is left unsupervised when his father enters the Odinsleep and his mother spends a vacation with her sisters. While Frigga has ordered him to study in preparation for becoming King, he decides to throw the universe’s largest kegger on Midgard, leaving Earth’s defenders to seek help in sending him to his celestial room.

“What If… Thor Were an Only Child?” has a good premise and could have been an interesting look into what makes Thor a hero and how he would have developed if his scheming brother were never part of his family. Uatu begins the episode by stressing how important Loki was to Thor’s growth, providing a counterpoint to his more rigid, disciplined ways. Right of the bat, this is a misunderstanding of the character. Thor was never a straight arrow as a kid; Loki was actually closer to that, despite being the God of Mischief. Thor was the impetuous one, the one who took his privilege (the real kind where he’s royalty and also a god) and opportunities for granted. In the first Thor film, Loki used that to manipulate Thor into getting himself banished and depowered. This is what the episode should have focused on: if Loki wasn’t around, would Thor have ever developed humility? The Frost Giants sneaked into Asgard at Loki’s behest, so the incident triggering Thor’s disobedience and eventual banishment wouldn’t have happened, meaning neither would Thor’s great lesson. Would a “vain, greedy, cruel boy” inherit the Asgardian throne? What would become of the Nine Realms in that reality?

“What If… Thor Were an Only Child?” is interested in none of that, instead focusing on broad, endless, unfunny comedy. What I said about Fat Thor in Endgame is true here, too: this is the result of Ragnarok being so popular. Now, Thor is seen as a joke, and he spends his What If…? episode bumbling around like a drunken idiot, along with everyone he’s ever met. And that’s an awful lot of people and beings; again giving in to the series’ least creative instincts, this week’s hypothetical has Thor knowing every single character the MCU has ever introduced who didn’t come from Earth. Thor is drinking buddies with the Guardians of the Galaxy (who weren’t a team yet, but are somehow always together), the Skrulls (still lame), the Frost Giants (led by Loki, who looks like a Frost Giant this time), the Grandmaster, Korg, the Sovereigns, and Surtur (because it’s logical that the fire demon destined to destroy Asgard and kill the gods would party with Thor). This is the Black Panther episode all over again – as many references as possible thrown at the screen with no rhyme or reason to any of them.

Then, it gets worse. Oh boy, does it get worse. In the wake of Thor’s destructive party, SHIELD contacts the only being they believe can fight him and the one space traveler he doesn’t seem to know: Captain Marvel. No points for guessing whether Thor thinks the same of her as a lot of Marvel fans do, and she has to teach him – and, by extension, us – a lesson in order to smash the patriarchy. All the expected stuff is here: Thor calls her a “party pooper” (which is an Asgardian term because they want to beat you over the head with as much dumb as they can find), insists that she’s ruining everyone’s fun, and, in the show-stopper, tells her she should smile. What’s funny is, her words, actions, and general demeanor perfectly embody everything Thor says about her, which means this is a pretty accurate representation of modern Carol Danvers. It’s like they’re demanding you dislike her, then calling you scum for disliking her. This leads to a big fight, and it isn’t as bad as I figured it would be; they’re presented as being evenly matched, and Thor gets some good hits in when he fights for his right to party. But, afterwards, they immediately qualify this by having Carol say that she was holding back because if she destroyed Thor, which she easily could have (cue eye roll), she’d have destroyed a chunk of the planet along with him. If you didn’t like Captain Marvel before, your opinion won’t change much when she tells you how much better than Thor she is.

The rest of the characters in “What If… Thor Were an Only Child?” range from decent to grating. Loki continues to be reduced to a goofy simpleton; for some reason, he’s become as big a party animal as Thor despite not being raised with him. Remember how the Frost Giants were warlike and untrusting of others, especially Asgardians, despite their tenuous peace agreement? Now, they’re dudebros, and Loki is the leader of the pack. Jane Foster is presented pretty well; she’s most like the version of her from the first Thor, which is the one I prefer. I enjoy seeing a brilliant astrophysicist who can also get tongue-tied and googly-eyed in front of a handsome guy; it humanizes her and makes her seem more realistic and three-dimensional. That’s what she’s like here, knowing that Thor is being destructive but also crushing on him big time. Darcy, on the other hand, is an amplified version of herself, constantly throwing out what she thinks are funny one-liners. I know a lot of people don’t like her in the films, and while I do, I imagine this is how they see her. Maria Hill, Phil Coulson, Brock Rumlow, and the various cosmic guest stars are fine, but barely a factor in the story; the exception is Surtur, who tries to make out with the Statue of Liberty because he thinks she’s a real person, because someone thought viewers would find that funny. (And, if Ragnarok is any indication, some will.)

The animation continues to be terrible. “What If… Thor Were an Only Child?” presents more of the same eyesores the previous episodes did; more stony facial expressions, more awkward action, more weird lip movements during dialogue. The voice acting is mostly good; a lot of the movie actors return to voice the characters, and they come off pretty well this time. Chris Hemsworth fits into animation nicely, and while I hate this version of Thor, he sells it as best he can with his good-humored performance. Through Hemsworth, Thor never comes off as evil or malicious; he’s just oblivious, an overgrown child who wants to have fun but doesn’t consider the consequences until his mother shows up to check on him. Kat Dennings is also lively as Darcy, and while the character makes entirely too many lousy jokes – often in just one scene – she sounds like she should. Natalie Portman is fine, but she’s the most let down by the bad animation because her voice isn’t overly expressive, so she comes off as flat. So do Cobie Smulders and Alexandra Daniels as Maria Hill and Captain Marvel, but it fits those characters better. When the best thing about an episode is mostly decent voice acting, you’ve got a dud. 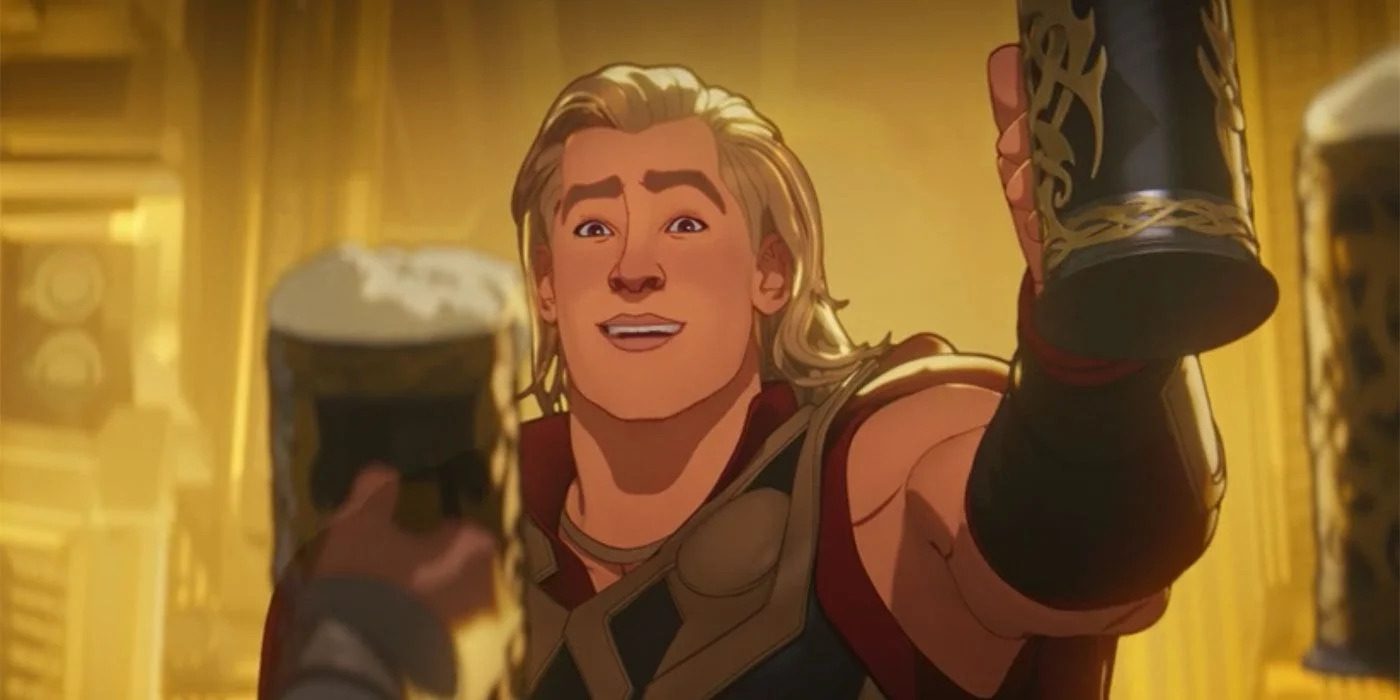 “What If… Thor Were an Only Child?” is probably the worst What If…? episode yet. The story is stupid and boring, little more than an excuse for relentless humor that fails to elicit any laughs. The characters are inconsequential, with nothing learned about any of them. And somehow, Captain Marvel still manages to make things less fun when she shows up to put Thor and the audience in their place. This is the show at its worst.

“What If… Thor Were an Only Child?” is probably the worst What If…? episode yet. The story is stupid and boring, little more than an excuse for relentless humor that fails to elicit any laughs. The characters are inconsequential, with nothing learned about any of them. And somehow, Captain Marvel still manages to make things less fun when she shows up to put Thor and the audience in their place. This is the show at its worst.

Thanks for all the Marvel reviews man! Thanks to you I know what to watch and what to avoid. Keep up the good work!

Thank you very much! It’s my pleasure.