"You're human. You keep hope against the worst of odds." 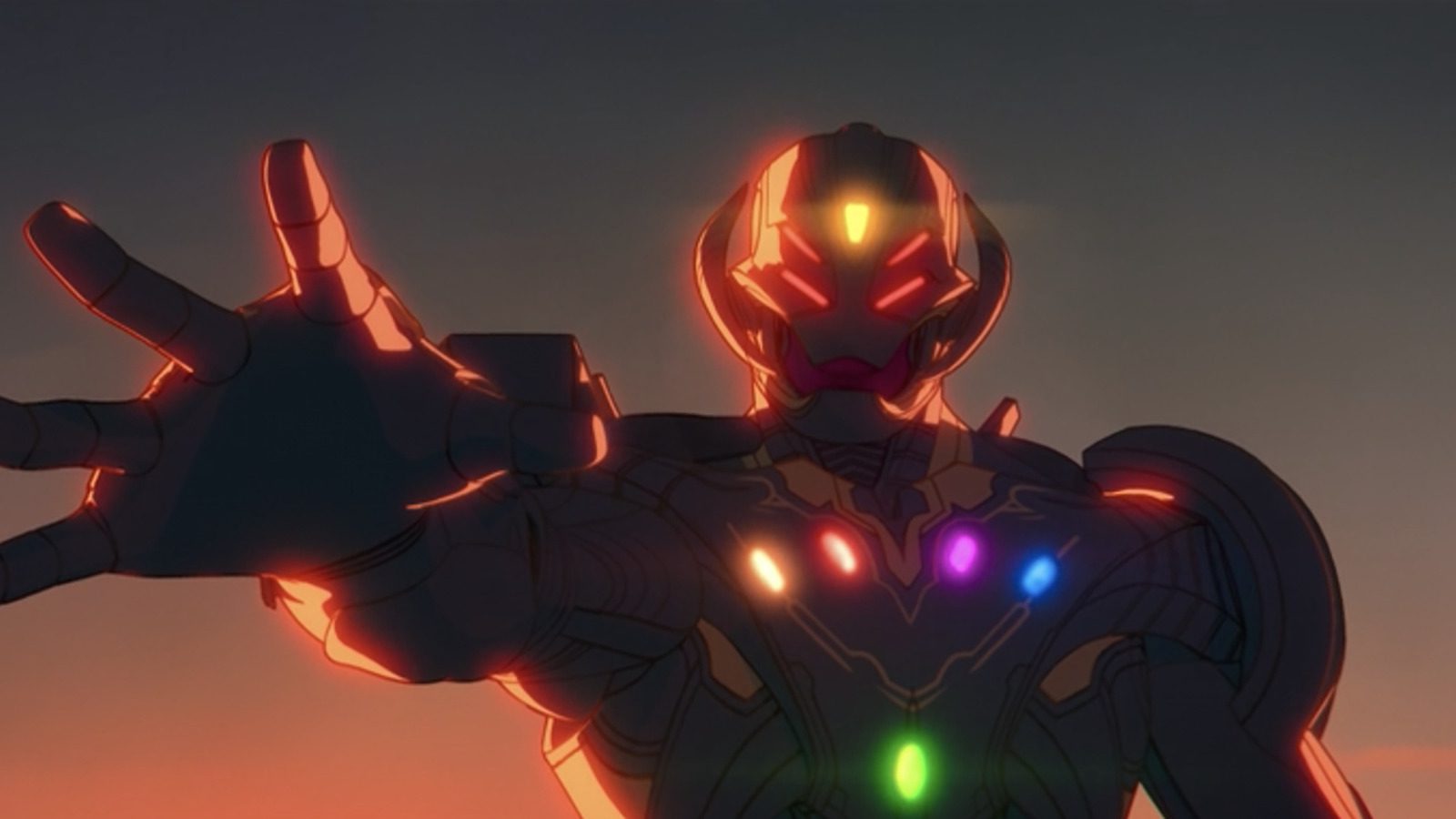 What If…? followed up its worst episode (maybe; that Star Panther one was rough) with its best one. “What If… Ultron Won?” is a game-changer, one that finally sees the different worlds to which Uatu has introduced us collide, explaining the ending of last week’s cringefest and setting the stage for the epic finale I didn’t think was possible with a show like this. And it’s fun, exciting, and touching throughout to boot.

In a new universe, Ultron holds onto Vision and uses him as intended, resulting in his defeat of the Avengers and the destruction of mankind. But when he discovers there are other worlds than his, Ultron moves on to different planets and galaxies, with no end to his genocidal conquest in sight. For the first time, Uatu is tempted to stop watching and lend a hand.

The setup for “What If… Ultron Won?” is similar to the comic book story “Age of Ultron” (to which the movie its title inspired bears barely a passing resemblance). A tiny change in the past – this time, Ultron using Vision as his ultimate vessel – leads to Ultron taking over the world. And the episode portrays that well, with Earth becoming a decimated wasteland full of flying Ultron drones and no people. The opening scenes are set in Russia, with the falling snow complimenting the bleak outlook humanity is left with in the wake of Ultron’s triumph. Also helping is that the only Avengers remaining are Black Widow and Hawkeye, two humans who stand little chance against an army of killer robots. (How Ultron was able to kill guys like Thor and Hulk is never explained.) Things don’t look like they could get any worse.

Then, Ultron gets a visit from another world.

Thanos’ entrance is what really kicks off “What If… Ultron Won?” After dispatching the Mad Titan with considerable ease, Ultron not only realizes that there’s a big universe out there for him to conquer, but that – with the Infinity Gems now in his possession – he has the means to do it. Perhaps more than anything else, this episode’s greatest strength is in showing how scary Ultron can be, something that, as much as I liked it, Age of Ultron (the film) didn’t quite pull off. Seeing him go from world to world, laying waste to civilizations we’d gaped at in awe while watching the movies, is unnerving.  Asgard falls almost instantly, the gods themselves defeated before even putting up a fight. In fact, the only real resistance Ultron gets is from (UGH!) Captain Marvel, because Disney and Marvel are obsessed with this character, but she lasts all of five seconds before Ultron annihilates her, too, thereby becoming my new hero. (Sorry, Thanos, but all you did was deck her.) Even Ego blows up when Ultron faces him, the living planet having his life stolen by the absence of life. And when the dust settles, Ultron is alone, the emperor of nothingness.

That’s key to making Ultron so fascinating as well. “What If… Ultron Won?” doesn’t just make Ultron scary, but human, and while the movie did this as well, here it’s done through his villainy more than his interactions with others. Once the last planet is his, Ultron looks upon his work with sadness, lamenting that there are no more worlds to conquer. While he may be a machine powered by artificial intelligence, there’s a shred of humanity in there somewhere, and it stands in stark contrast to Thanos, the other villain who actually won. (Well, Loki did too, but some obnoxious buffoon ruined that.) When Thanos completed his destiny, he felt satisfaction in his victory. Ultron, however, takes pleasure not so much in the ends but the means, and once there’s no more fighting left, he feels empty, like he has no purpose. It’s a relief when he discovers Uatu and, through him, the endless realities he can visit and reshape in his image. Ultron not only has understandable motivations but a drive to complete his mission that is infectious, making him at once a human and inhuman monster. This is fantastic character work and done economically through action.

“What If… Ultron Won?” doesn’t stop with its titular robot, though. Black Widow and Hawkeye are fleshed out through their new circumstances as well.  How would these two navigate a dystopian nightmare? Together, of course, but individually, quite differently, and like Ultron, we can see that in comparison to one of the movies. Natasha makes the occasional quip, refusing to let hopelessness consume her, while Clint is wallowing in despair, fighting on out of habit – almost like a robot – but wishing he could just lay down and die. Comparing these versions to the ones in Endgame is fascinating; in the film, Natasha had lost all hope and, although she still kept the Avengers going, she was a mess, utterly broken by Thanos. Clint clung to violence, dealing out death to the evil among those who survived the Snap. Why are they so different this time? I think it’s having an enemy to fight instead of having to accept a horrific reality, even if they probably won’t win. Thanos was gone, and his apocalypse was irrevocable (as far as they knew), so they were facing hopelessness. But this time, there is a physical bad guy in Ultron, so they can channel their rage and sorrow into war. Natasha thrives on that, having dedicated herself to situations that are well beyond her capabilities – on paper, anyway – but Hawkeye is just tired, wishing to throw away his bow and succumb to the inevitable. Rage and despair have switched characters, and even in their last moment together – a beautifully tragic scene again invoking Endgame – their differences reveal themselves; Clint gives up, while Natasha fights on.

But the most unexpected character development comes from Uatu the Watcher. For the past seven episodes, Uatu was little more than a narrator, guiding us through each crevice of the multiverse and occasionally delineating the Aesopian moral of the story. In “What If… Ultron Won?” he’s a full-fledged character; you could even argue that he’s the protagonist. Starting with his proclamation in the opening narration that “this one breaks my heart,” he views the hell that unfolds in this world with more passion and sorrow than he did the others. At a certain point, he visits Earth and cheers for Hawkeye and Black Widow to succeed in their quest to stop Ultron and even contemplates interfering to help them. And his confrontation with an all-powerful Infinitied-up Ultron shakes his entire worldview, as Ultron mocks him for standing by and doing nothing when he had the power to save everyone. And, now that a good man has done nothing, evil has flourished, and even Uatu can’t defeat Ultron. If you wondered why they got an actor of Jeffrey Wright’s caliber to play Crypt Keeper for the show, this is why. Uatu is finally ready to intervene, and next week’s finale should be a doozy.

Maybe it’s because I liked the story and character work so much, but every aspect of the series seems like it’s better in “What If… Ultron Won?” Even the lousy animation doesn’t look so bad this time. It may have gotten better, but I suspect it’s due to some smart tricks from people who know their work isn’t up to snuff. For example, the scenes in snowfall create such an arresting atmosphere that it’s hard to notice the facial movements that are usually stiff and lifeless. There are also a lot of shots that are essentially still images, like Hawkeye slowly falling down the shaft toward an Ultron army, that work because they lack motion. The voice work is also better than usual this time, and it’s probably not an accident that this episode has the fewest number of movie actors. Lake Bell is great as Black Widow (and she’d better be because I doubt Scarlett Johansson will be showing up anytime soon), and Ross Marquand is wonderfully effective as Ultron. (Between this and Red Skull, he’s becoming a sort of MCU villain stand-in when the original actors won’t come back.) Marquand gives Ultron a voice of cold, mechanical efficiency, but lets humanity creep in here and there, which is perfect for this portrayal. And Jeffrey Wright has always been a good Uatu, but this is where he comes into his own and can really play with the character. Jeremy Renner is a little bland, at times, but he works well enough.

“What If… Ultron Won?” is an excellent glimpse into what this series could become going forward, building on what we thought were unconnected vignettes and creating a compelling story about a villain finally rising to his potential and a bystander who’s called upon to be a hero. The animation and voice acting are better than usual, and the character development works through a contrast with the movies, further cementing the “What If” nature of the show. And now the stage is set for the finale next week; I’ve been playing the possibilities in my head since this episode ended.

“What If… Ultron Won?” is an excellent glimpse into what this series could become going forward, building on what we thought were unconnected vignettes and creating a compelling story about a villain finally rising to his potential and a bystander who’s called upon to be a hero. The animation and voice acting are better than usual, and the character development works through a contrast with the movies, further cementing the “What If” nature of the show.