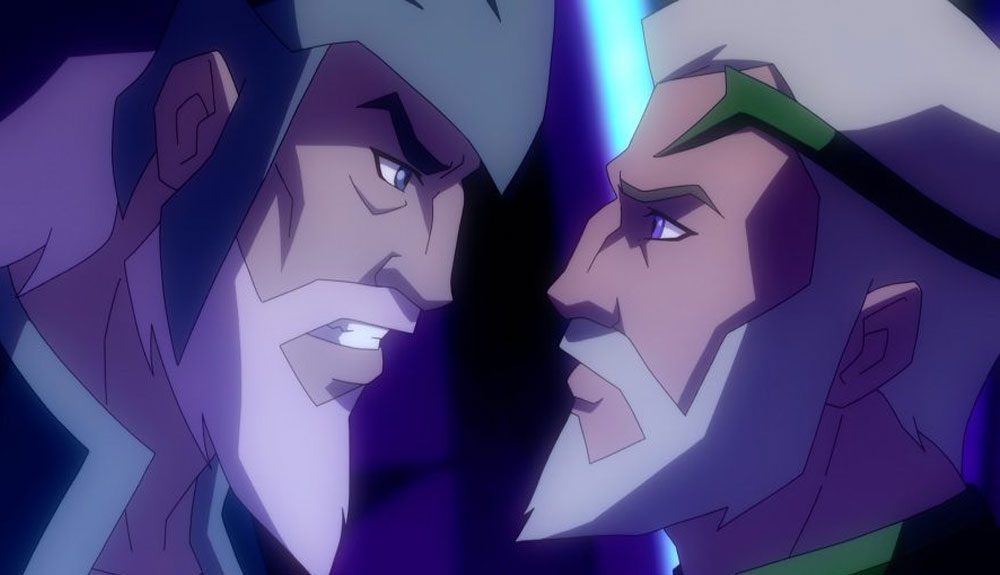 In “Leviathan Wakes,” the Orm clone is devastated by the knowledge of what he is. In Xebel, Mera’s father, the King, squabbles with Arthur over Arion’s reappearance and the date of Atlantis. Meanwhile, Kaldur and his team press on. Lagann is frustrated at the possibility of missing Coral’s baby being born as Wyynd worries about Kaldur’s mental state. The Atlantian delegates meet again and make it clear that they expect a vote for King of Atlantis at the end. Kaldur funds Arion’s crown, but a beast approaches. M’gann helps the Orm clone activate old memories, and we discover that he and Arion were made by Vandal Savage. Arion is Orm in a new body. This revelation comes just as the delegates press harder and harder to elect Arion. He is indeed chosen, with only Mera’s father Nereus voting otherwise – for himself. When the false King wears Arion’s crown, the Lords of Order strike him down. Mera moves to restore Arthur’s rule, but he argues that her actions in fighting the Red Sea reveal her as the promised leader. Mera is made high King of Atlantis. Meanwhile, on War World, Nabu tells Vandal Savage that his plan’s failure was inevitable. Conner sees the time-travelling bus and fears for his mental health as Lex Luthor appears, saying, “Red sun.” 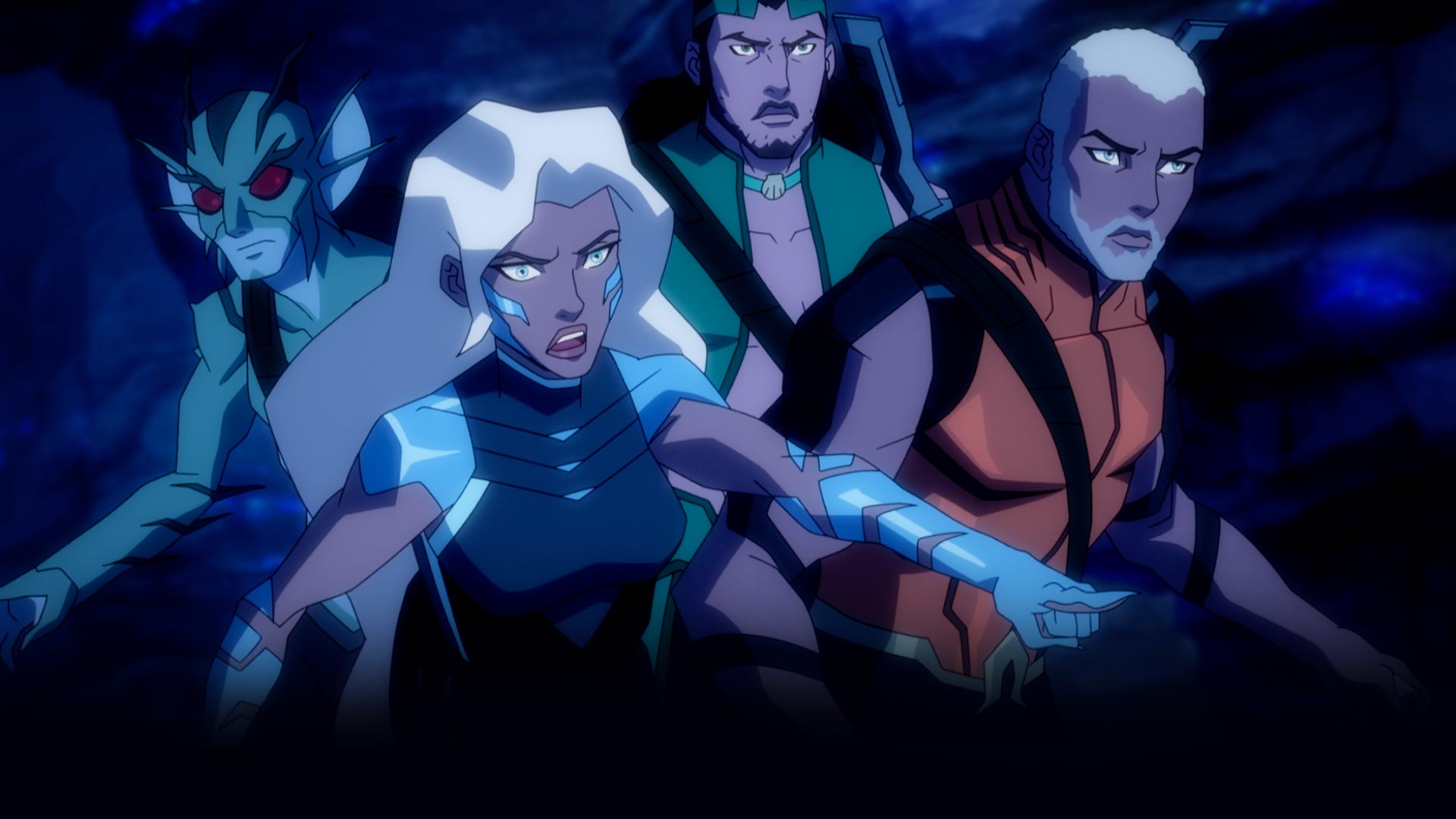 Well, I had heard that the three episodes released last week comprised Kaldur’s complete story arc for this season. It would make sense; the way it ended felt like it would connect to the larger story, and only having three episodes would compensate for Zatanna’s 5-episode arc. At least we got the actual resolution quickly, and while none of the reveals are terribly surprising, the story beats are delivered well. As a random aside, has anyone else just realized that two of Vandal Savage’s sons were Lords of Order? We’ve known about Nabu for quite a while, and Arion has been explored extensively this season, but for some reason, this just now clicked for me when Nabu confronted his father at the episode’s end.

A lot goes down in “Leviathan Wakes,” and the story threads continue to intertwine as M’gann heads to Atlantis to help some old friends. I was surprised to see her here with the way Garfield’s situation was left last week. Throughout Phantoms, Gar’s mental health has spiraled since Conner’s passing. It feels like we’ve been waiting forever for this story thread to be resolved, and it’s starting to feel like a cycle. Gar is selfish and closes himself off, he’s challenged to face his demons and prioritize his mental health, and he becomes even more self-absorbed and awful. I have a lot of sympathy for his situation; we’ve all lost someone, and I’ve struggled with depression and trauma myself. Things were particularly bad for me in the early days of the pandemic. But it’s hard for me to root for a character who is offered help and support only to perpetually reject everyone and go to his room to hide and pout. This isn’t touched on in “Leviathan Wakes,” probably since M’gann isn’t with him, but I really hope he makes a good choice soon. He owes everyone an apology, particularly Perdita. It’s normal to feel this way, but that doesn’t mean he should take it out on the people who love him and just want to help. The visitors from the future also aren’t mentioned in this episode.

I don’t know how I feel about Mera as leader of Atlantis, but I definitely don’t care for how it’s presented in “Leviathan Wakes.” Why call her “King” when that’s a male term, and they already have their own name for a leader in “Annax”? And the way Arthur goes about nominating her comes off as somewhat preachy, like a big “good for her” moment. This wouldn’t be as big of a deal if we knew Mera better in this show, but she’s had even less screen time than her husband. What, exactly, makes her a great leader, aside from fulfilling an otherwise arbitrary prophecy by fighting alongside the false Orm and Arion? I agree with Arthur’s decision not to retake the throne after what transpired with Arion and the crown; the people wouldn’t see it as rightfully his, as only one of the city-states supports his rule in the first place. Even his reasoning, based on Mera’s royal upbringing and his uncouth background, makes sense on paper. But while Young Justice usually excels at presentation, that’s exactly the problem here. We need to see why Mera would be a great Annax. Hearing someone say it isn’t enough. This could have been a more satisfying resolution if we knew Mera better, understood why she would make a good leader, and the ultimate decision didn’t feel so pander-y. The way the crowd chants “Arion” and eventually “Annax Mera” is also goofy and distracting. I know big crowds of people can act foolish and stupid, but this didn’t feel realistic at all. 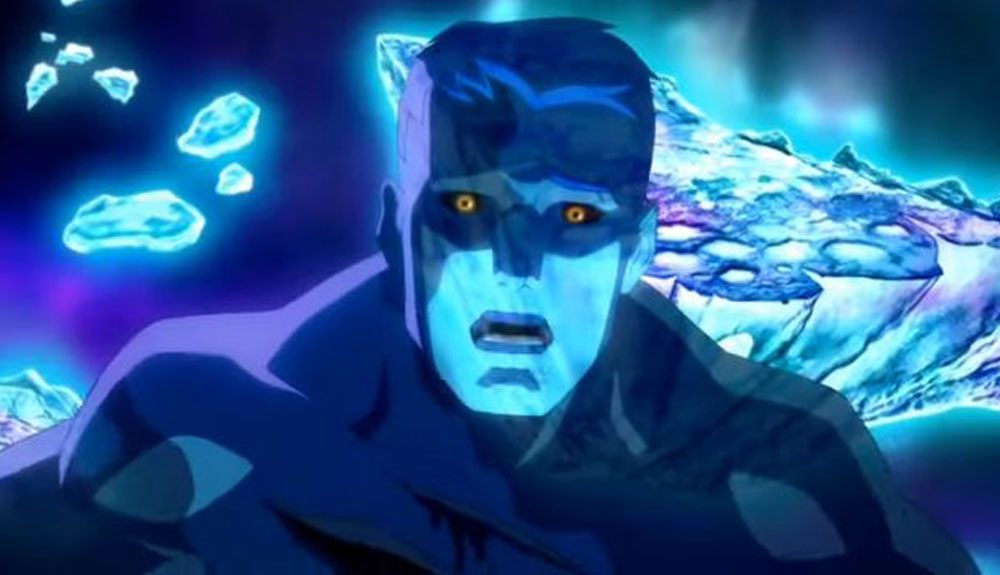 Then, we have the Orm clone and the apparent death of a major villain! And did Lex Luthor somehow create the situation Conner finds himself in? Why does he say “Red sun” to him? Am I missing something here? I’m really looking forward to seeing what happens, and I hope Conner comes out of it alive somehow. The scene where Nabu comes down to face Vandal Savage has to be one of my highlights in the episode; this is what I want more of on the show.

Overall, I think “Leviathan Wakes” is a weaker episode of Phantoms as a season and the weakest out of Kaldur’s story arc by far. I wouldn’t call this a bad episode, but several crucial storylines from this arc are left untouched. The resolution for the Atlantian King issue feels cheap and unearned, an attempt at getting some feminism points with no effort. The animation is still good, and I quite enjoyed the bits with M’gann, Kaldur, and Conner.

Overall, I think "Leviathan Wakes" is a weaker episode of Phantoms as a season and the weakest out of Kaldur's story arc by far. I wouldn't call this a bad episode, but several crucial storylines from this arc are left untouched. The resolution for the Atlantian King issue feels cheap and unearned, an attempt at getting some feminism points with no effort. The animation is still good, and I quite enjoyed the bits with M'gann, Kaldur, and Conner.