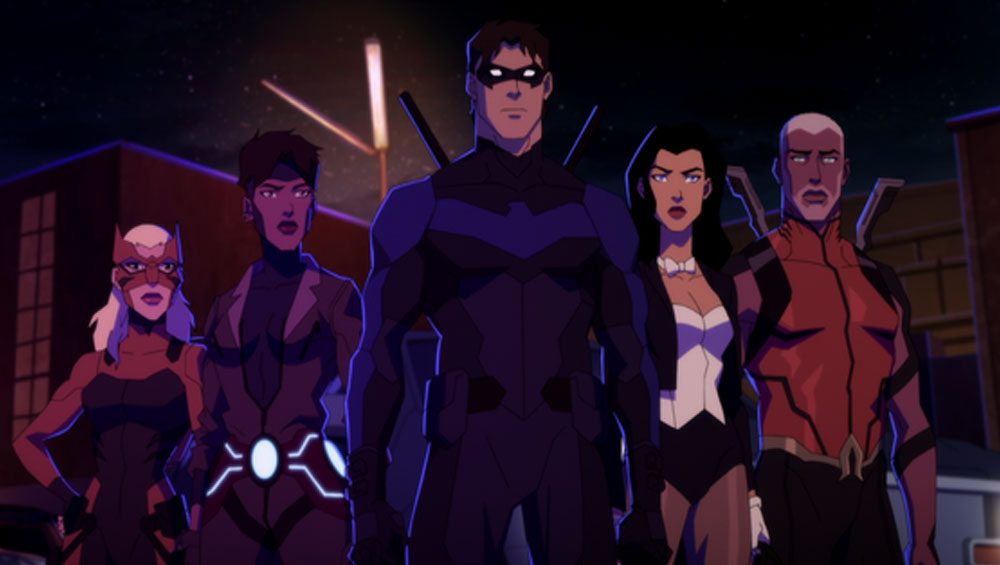 “Ego and Superego” opens in Markovia as a young metahuman is confronted by citizens who want to do away with his kind. He’s saved in the nick of time by Brion and his Infinitors, but one gets away and is revealed to be Brion’s ally, Everyman, in disguise. Meanwhile, Harper helps Violet move into her dorm and asks her to be more than friends. In the Phantom Zone, Phantom Girl finally tells Conner who she is and how they ended up there. She surmises that the Zone is a buffer between Mars and her home dimension of Bgtzl, where she tried to take him. She wants to return him to Mars, but he resists, wanting to stay and serve Zod. Back on Earth, Nightwing and friends find the bus, but it’s already been junked and probably won’t help them find Conner. In Markovia, Brion meets with his advisors as Lizard Johnny, the boy the Infinitors saved, is plied with propaganda and kindness. In a Justice League youth meeting, Violet, Cyborg, Garfield, and others talk to Black Canary about what they’re going through. In the Zone, Phantom Girl tells Conner about Zod’s problematic past. When Ursa and General Zod come back, he tells them that Phantom Girl has woken up against her wishes. Brion’s Infinitors threaten a government official to scare him out of Markovia. Garfield has gotten an emotional support corgi, which seems to be helping with his depression. In the Zone, Phantom Girl flees, returning to Mars and feeling the pain of her burned hand. Brion won’t answer Violet’s texts, so she comes back to Markovia. He won’t leave with her, and she won’t accept his proposal, so she retreats. Zatanna’s trogowogs reassemble the bus in exchange for Nightwing’s car and a bag of snacks. Tigress suggests they contact M’gann, but Dick doesn’t want to get her hopes up unless Conner is found alive.

It’s good to see Brion again. I’ve seen some controversy around his character in Outsiders, but I like him. He’s a sheltered, vulnerable young man, and this opens him up to manipulation despite his wealth and political power as King of Markovia. I liked him and Violet together in Outsiders, and I’ve been hoping they would reconcile, but that doesn’t seem to be where the story is going. I still think Brion will be redeemed and reject the ideas Helga Jace and Markovia’s ambassador are trying to push on him. But it would appear that they’re going to pair Violet with Harper, and I don’t see any writers on any modern show passing up an LGBTQ opportunity to reunite a former hetero relationship. I don’t remember Harper that well, so I’m not sure how I feel about her and Violet together; that’s just emblematic of my own need to go back and rewatch the previous seasons after Phantoms ends.

One of my favorite threads in “Ego and Superego” is the super therapy session. I’ve come to love explorations of mental health in pop culture. It’s mostly just good to see that Beast Boy is making real progress now, and his bond with his dog is just precious. I’m an animal lover myself, and the image of him turning himself into a corgi to play with his dog is funny. Violet’s confusion about Brion and Harper in this scene is understandable, and Tara knowing exactly who she was talking about was amusing to me. I’ve been Violet in this situation, where it was obvious to everyone else what was going on in my own life, but I was still blindsided by it. I liked Victor’s brief comments on his relationship with his dad and trying to offer the wisdom he’s gleaned from it to Violet. This entire scene was very wholesome, even if Black Canary had to come back and tell them not to tell Violet what to do. From what I could tell, they weren’t doing that, just relating Violet’s experiences to their own. By the way, I love the animation on the propaganda films the Markovians show Lizard Johnny. It looks similar to the animated DC shows of the 90s and early 2000s. While Young Justice generally goes with its own style, I appreciate callbacks like this and Beast Boy’s nightmare about the Doom Patrol in Outsiders. 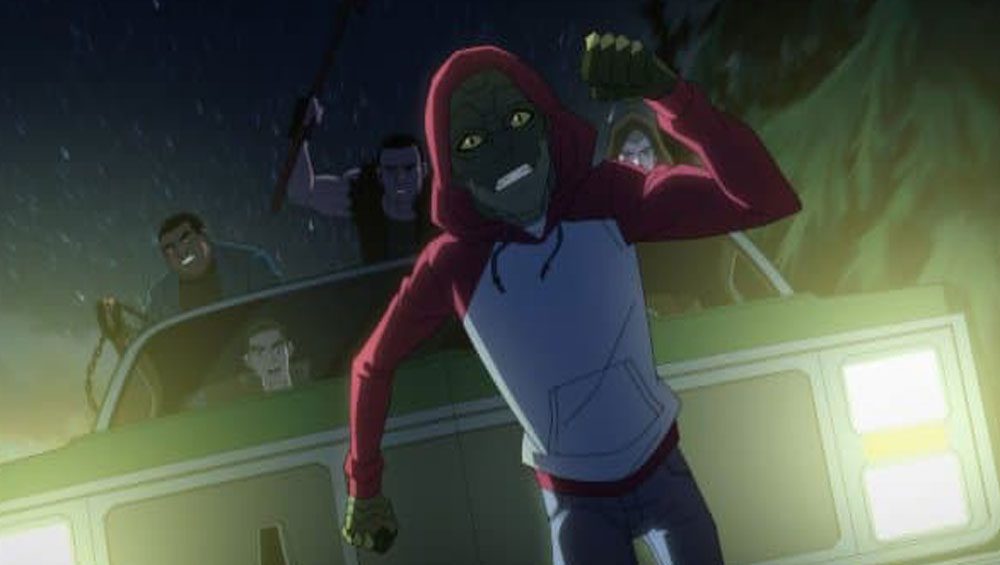 A downside of the spread of screen time across multiple stories is that we don’t spend much time with Conner or our group of intrepid heroes in “Ego and Superego.” As an aside, I love this title. It’s fitting for a story that deals with superheroes and the struggles within the mind. Anyway, as much as I like Brion, Violet, and all the other characters, the main action here is with Dick and his cohorts. And the internal conflict is Conner’s; the man is essentially brainwashed, having been weakened by Zone sickness and used by the Zods for their dark purposes. Things aren’t looking good for Phantom Girl at the moment, at least in terms of helping Conner. She escaped, but what now? Will she find Nightwing, Aquaman, etc.? Or will she try to return to her own friends from the future? You can’t help someone who doesn’t want help, and right now, Conner thinks he’s where he wants to be. This is what I’m most interested in, and I look forward to seeing how it develops throughout the rest of the arc.

Thank goodness there’s no latent sexual tension among Nightwing’s team in “Ego and Superego”! I found that so awkward and unwelcome in last week’s adventure. I really wish we could have spent some more time with the main team this week, as this season has largely been about them, and this is the culmination of their respective journeys. For example, Zatanna’s trogowogs fixing the bus seemed too easy. This was teased in her arc, but in this one, there was no buildup, and they did it as soon as they appeared. Nightwing also doesn’t feel all that active in an arc that’s supposedly about him. I’m generally more interested in Conner anyway, but some balance would be appreciated. Overall, I enjoyed “Ego and Superego” quite a bit. I would have liked for the characters’ screen time to be allotted differently, but there’s no awkward tension between the heroes. The comedy and pathos are balanced well, and I eagerly await the resolution to Conner’s imprisonment.

Overall, I enjoyed "Ego and Superego" quite a bit. I would have liked for the characters' screen time to be allotted differently, but there's no awkward tension between the heroes. The comedy and pathos are balanced well, and I eagerly await the resolution to Conner's imprisonment.