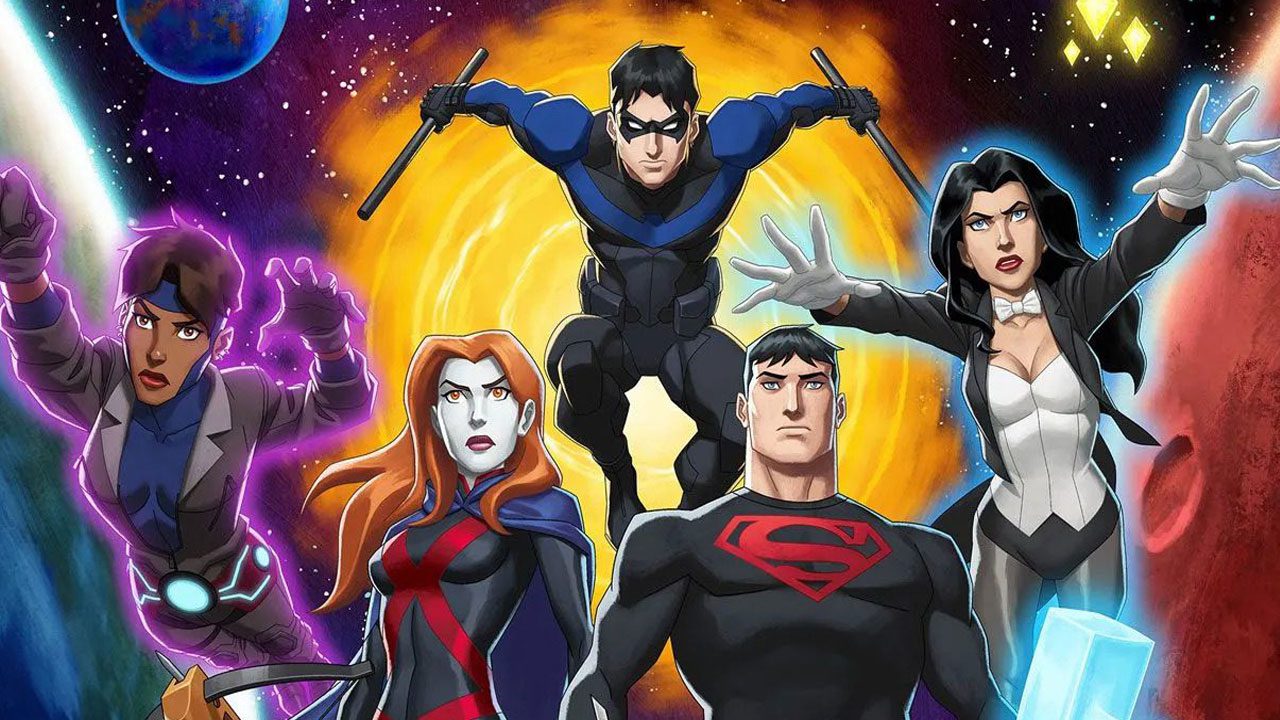 “Death and Rebirth” finds Conner, Dru, and Lor-Zod preparing to execute Superman. Nightwing is alive and well after all, revealing he cut his own forehead and used Batman’s technique to slow his heartbeat. M’gann and Zatanna likewise used illusion magic and telepathy to create the grisly scene of everyone dead with Bioship. Just as Dick and M’gann are explaining this to one another, Baby arrives to pick them up. Dick talks M’gann into using her psychic powers against the Zods despite her moral objections. General Zod orders M’comm to open the portal to the Phantom Zone to release his army. M’comm tortures the spirit of Danny Chase once again, but Saturn Girl helps Danny kick M’comm out of his mind. M’gann catches up to Conner and helps him remember his former life before he can hurt any of their friends. Conner and a healed Superman go head-to-head with Lor and Dru-Zod. Rocket appears in a time-sphere and explains how she was saved by her force field and a plan of Metron’s. General Zod is pushed back into the Zone, and Ursa’s ally, the Eye of Ekron, drags her away to protect her. Lor escapes in his time-sphere and realizes it has a pre-set destination: Mars, specifically the site of Conner’s presumed death in “Involuntary.”

The rest of the episode deals with Conner and M’gann’s wedding and mental health. Specifically, we see that Gar is still on hiatus from the Outsiders and Space Trek but is doing much better with his emotional support corgi. Black Canary also highlights the need for greater mental health support for heroes across the board, starting a discussion about expanding her operation at the youth center. M’gann’s parents arrive from Mars, and M’ree has decided to retake her birth name. Perdita informs Garfield that she has moved on from their relationship but wants to be his friend. The heroes agree to send the Zone prisoners to Trombus, but it’s revealed that Vandal Savage has other plans for them. M’comm is presented with a world for the A’ashenn: Durla, homeworld of Chameleon Boy. The time-sphere ends up in Metron’s vault after delivering the future Lor-Zod to his death. However, in the present, Ursa is still pregnant with the boy. The Legion is whisked back to their own time by Brainiac-5, who tells them all is well with the time stream. 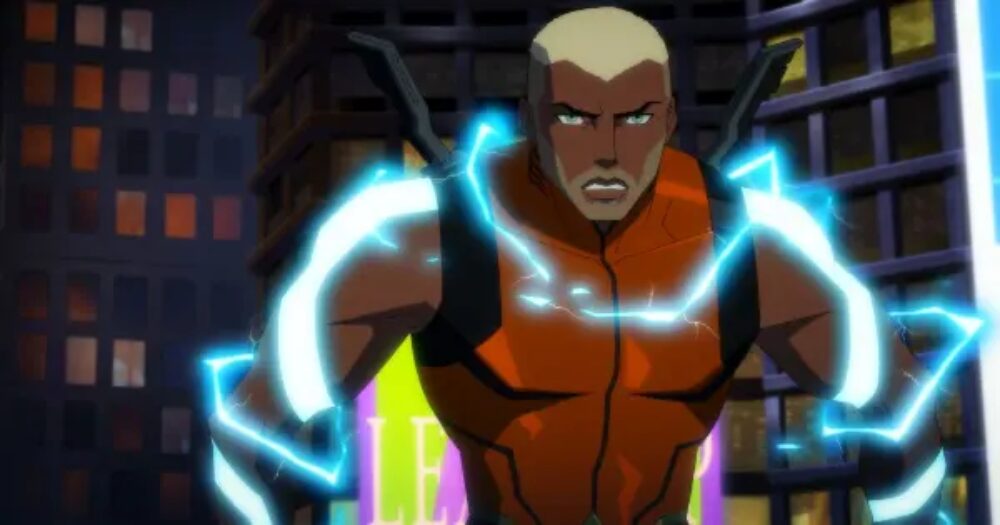 What a season finale! “Death and Rebirth” runs a lean 27 minutes but is so heavy on content it feels like it could be twice as long. I’m going to go ahead and get my few gripes out of the way now. “Over and Out” contained too many fake-out deaths. This affects “Death and Rebirth” because it’s saddled with the tedious task of explaining how absolutely nobody died. Phantoms is very much Young Justice’s “fake-out death” season. This bothers me mainly because they’ve done it with nearly every member of the main cast, and in most cases, I immediately knew they couldn’t be dead. I’m fine with Conner’s fate because it was handled so well, and the payoff here in “Death and Rebirth” is so satisfying. You can explain away Dick’s situation because he couldn’t have the Zods attacking him for real. He would be no match for even one of them. But Rocket and the gruesome scene at Bioship is a little bit much. This doesn’t ruin the finale or season; I just found it annoying enough to mention it. That being said, this episode’s title is beyond appropriate because almost every character goes through death and rebirth!

I still feel like Dick was an afterthought in his arc, as most of these episodes have been more concerned with Conner and the Zods than the Boy Wonder. Every other arc in Phantoms has been pretty well focused on one of the core heroes, even Zatanna’s arc, which had the most going on. That arc dealt with the backstories of Doctor Fate, Vandal Savage, and his children, and it still felt like Zatanna’s story. Finally, I found some of Superman and Superboy’s dialogue during the fight with the Zods to be cringey. I can’t think of a better word for what I mean, but it’s like the dialogue here was intended to be badass, and it fails spectacularly. They say “For the future of Earth” in tandem, and other things to the same effect.

However, I like the fight other than that. It shows that Clark and Conner are a real family now, more than the Zods can be. They don’t know each other, Lor having grown up in the 31st century and Dru not knowing Ursa was pregnant. Conner and Clark have been fighting together for years now and come to regard one another as brothers. In this episode, we even see that Jonathan (who is alive in this universe) and Martha have adopted Conner. 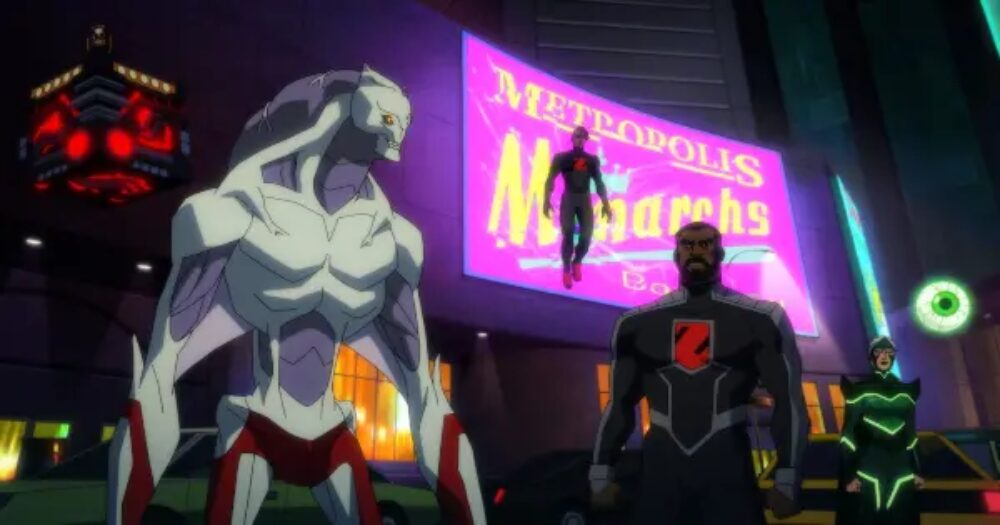 You could say that M’gann healed Conner’s mind too quickly and easily, and in a different show or situation, I would. But these two have a unique bond. Aside from in-story reasons, Young Justice has yet to be renewed for a season 5. How evil would the writers have to be to leave Conner like this at the end of the season? I hope we get a renewal soon, but it was wise not to count on it. It’s wonderful to see M’gann and Conner get married after all the trials Phantoms brought, not to mention a decade of in-story dating! There are a lot of little details I enjoyed with this, like the “cape and tie optional” line, not to mention Lucas’ comment that even death can’t part M’gann and Conner. In the end, it looks like Conner’s scars from the explosion have also healed. I wonder how long after the battle the wedding takes place; not long, I assume, since M’gann explicitly says it’s short notice but that they don’t want to wait anymore. Honestly, totally understandable. We also see that Violet and Harper are officially a couple, sitting together at the wedding and holding hands. Poor Brion, though I can’t blame Violet for moving on. 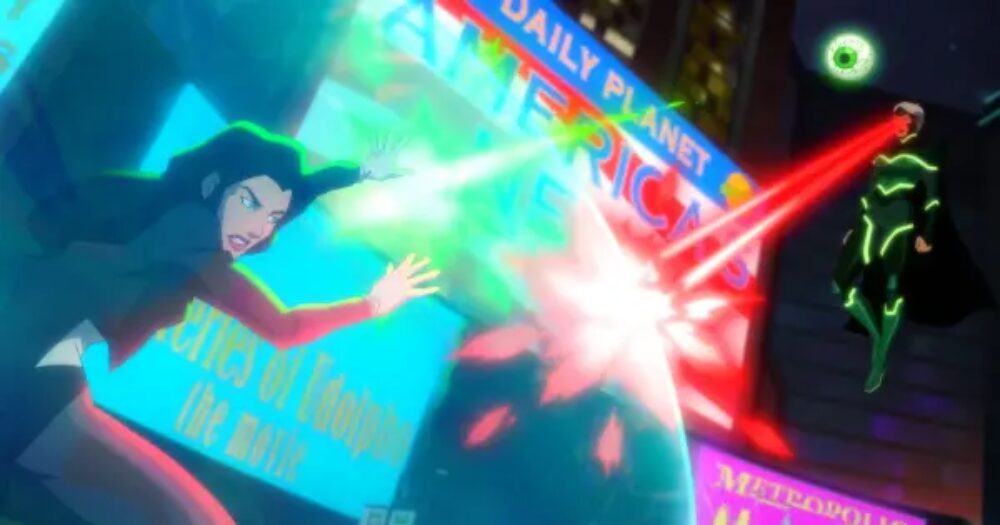 “Death and Rebirth” has flaws but is a great episode of television and a pretty satisfying conclusion to Phantoms. I was worried they would struggle to tie this massive story up in one half hour of TV, but they did it. Some loose ends could lead into another season, like Mary Marvel’s apparent team-up with Granny Goodness. I hope the show doesn’t end here, but it’s not a terrible way to end if it does.

"Death and Rebirth" has flaws but is a great episode of television and a pretty satisfying conclusion to Phantoms. I was worried they would struggle to tie this massive story up in one half hour of TV, but they did it.