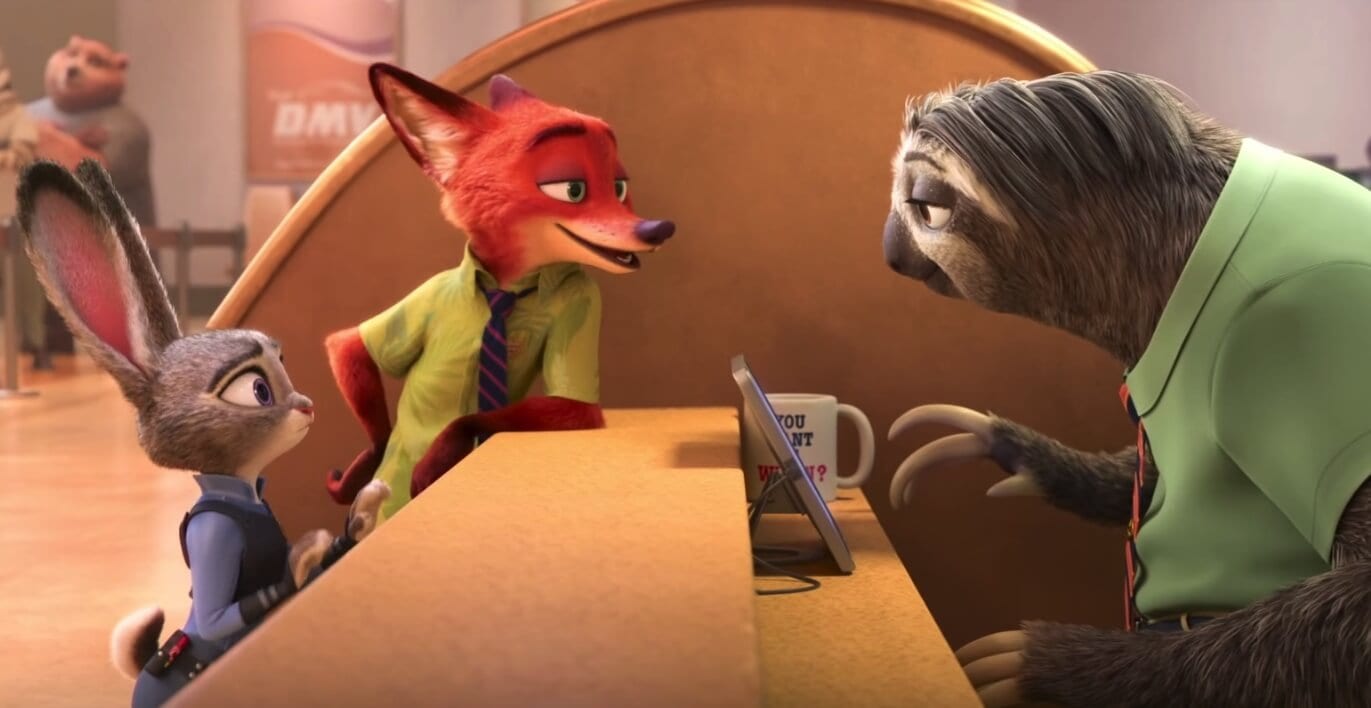 “Life isn’t some cartoon musical where you sing a little song and all your insipid dreams magically come true. So let it go.”

Disney’s Zootopia went through a lot of versions and changes before making it to the big screen. Director Byron Howard (Bolt, Tangled) originally pitched six different stories to Disney and Pixar’s chief creative officer John Lasseter, three of which featured all-animal casts. Over time, the stories were worked together into a James-Bond-inspired spy caper starring an anthropomorphic fox. Eventually, the spy elements and 1960s setting were dropped, as the best part of the story seemed to be the city, which was inspired by big cities and various real animal habitats. The story finally evolved into a modern-day buddy cop story. Judy Hopps started out as a sidekick to hero Nick Wilde, but this also changed throughout production.

Zootopia starts with a young Judy performing in a play about how predators used to eat prey and how things have changed, with predators and prey learning to live together in peace. At the end, all the players announce what they want to do when they grow up, with Judy drawing jeers for saying she wants to be a police officer. Nonetheless, she overcomes all adversity to become the first bunny cop and moves from her small town to Zootopia, a metropolitan city divided into boroughs based on different biomes. There she meets Nick, a small-time criminal, and the two uncover a conspiracy to turn predators savage and divide the city’s citizens.

Zootopia is a great update on the formula of Aesop’s fables and a fantastic representation of how prejudice and divisive politics work in the real world. The audience sees the world through Judy’s eyes, and one of the most interesting things about the movie is that she’s guilty of her own prejudice and assumptions toward other groups, particularly foxes. The film doesn’t come off as preachy or pretentious at all because it realizes that even good people with good intentions have their own internal biases, while also positing that we must overcome our own shortcomings and learn to be better.

This alone would be a sufficient journey for the film’s main character, but they don’t stop there. Judy’s big assumption at the film’s start is that Zootopia is a perfect place where everyone gets along and anyone can be anything. As she herself states in the end, real life is more complicated than that, and positive change starts with the self. The film has a false ending in which Judy “solves” the case by implying that the predators are going savage due to some element of their biology, alienating Nick and further dividing the city. Zootopia was in production for years, but it’s chilling that this film came out in the same year that the winner of the presidential election ran on a platform of racism, xenophobia and division. The film responds to real-world problems with clever analogy and a positive solution; the film’s ”thesis statement” could be that everyone has bias and everyone has something to learn, but that if we all work together, we can make the world a better place.

The film’s cast is nothing short of perfect. Ginnifer Goodwin, known for the ABC fairytale crossover Once Upon a Time and the Disney fairies movie Legend of the Neverbeast, brings warmth and believability to Judy. Funnyman Jason Bateman co-stars as the wily Nick, who really has a heart of gold. J. K. Simmons is delightful as always in the role of Zootopia’s mayor Like, and Idris Elba lends a hilariously gruff exterior to police chief Bogo. Alan Tudyk provides the voice of street hustler Duke Weaseltown, a play on his character in Frozen. Jenny Slate plays Assistant Mayor Bellwether, Bonnie Hunt and Don Lake are Judy’s parents, and Maurice LaMarche plays this universe’s godfather, a vole named Mr. Big. The cast also features Shakira, Octavia Spencer, Tommy Chong, Nate Torrance and more.

The animation in Zootopia is stellar all around. Everything from metal to plants to various types of fur is rendered seamlessly in what is quite possibly the studio’s greatest technical achievement since Tarzan. The character animation is amazing too, particularly on leads Judy and Nick. Michael Giacchino created the original music for the film, and it’s lovely. It’s also impressive how different the music is when the movie goes from Bunnyburrough to the various districts in Zootopia. Giacchino employs totally different styles of music depending on what’s going on. I also like the film’s theme song, “Try Everything,” performed by Shakira’s character Gazelle.

Zootopia, for me at least, perfects the male-female platonic friendship they were going for in Wreck-It Ralph. I liked that movie a lot, but the emotional backbone of the film was the friendship between Ralph and Vanellope, the latter whom I didn’t like. In Zootopia the friendship between Judy and Nick develops very organically, and it is genuinely sad when Judy makes a comment about predators and hurts Nick. I think it’s interesting that Disney has veered away from their traditional fairytale romances in favor of films with two platonic leads. I don’t think there’s anything wrong with either concept, but I’d like to see more of a mix. Regardless of the overall trend, these characters are great, and their friendship works and develops incredibly well in the film. 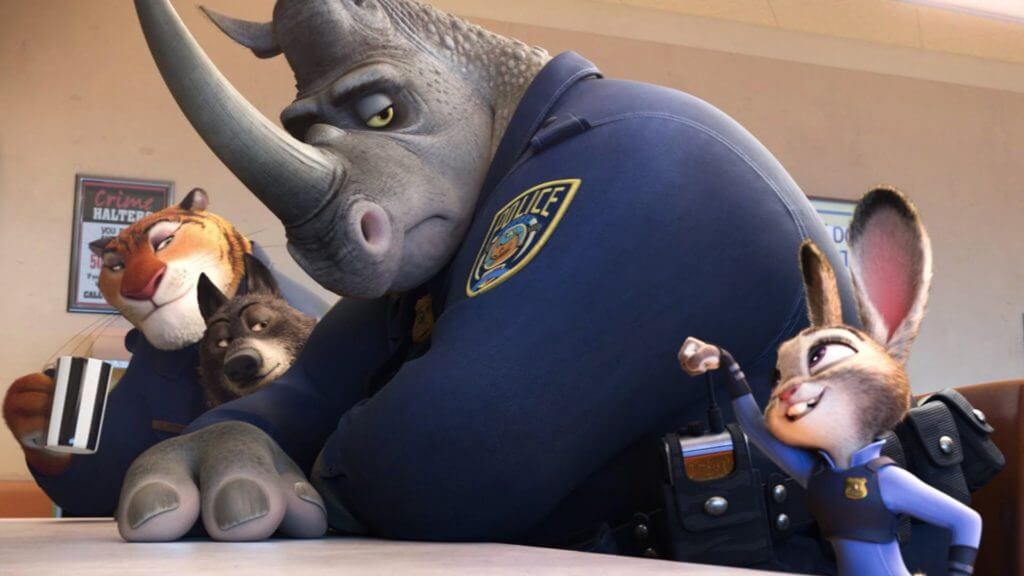 Zootopia is guilty of continuing the studio’s run of plot twist villains, but I think it’s forgivable in this case. They go for a film noir/crime thriller type of feel, especially later in the movie, so it works here. I don’t care much for the villain as a character, and her hatred of predators isn’t explained very well. But the film puts all the attention and effort into Nick and Judy, and I think it’s worth it for two such great main characters.

Overall, Zootopia is amazing. It’s not my very favorite Disney movie, but it is high on the list, and I think it’s technically one of their best. The animation, comedy and music are superb. The film is full of both emotional moments and fast dialogue, particularly between the two leads. I’d recommend Zootopia to anyone; I think it has great messages in it for kids, while also being very entertaining and even thoughtful for adults.

Overall, Zootopia is amazing. It's not my very favorite Disney movie, but it is high on the list, and I think it's technically one of their best. The animation, comedy and music are superb. The film is full of both emotional moments and fast dialogue, particularly between the two leads. I'd recommend Zootopia to anyone; I think it has great messages in it for kids, while also being very entertaining and even thoughtful for adults.