Slap Fight at the Oscars 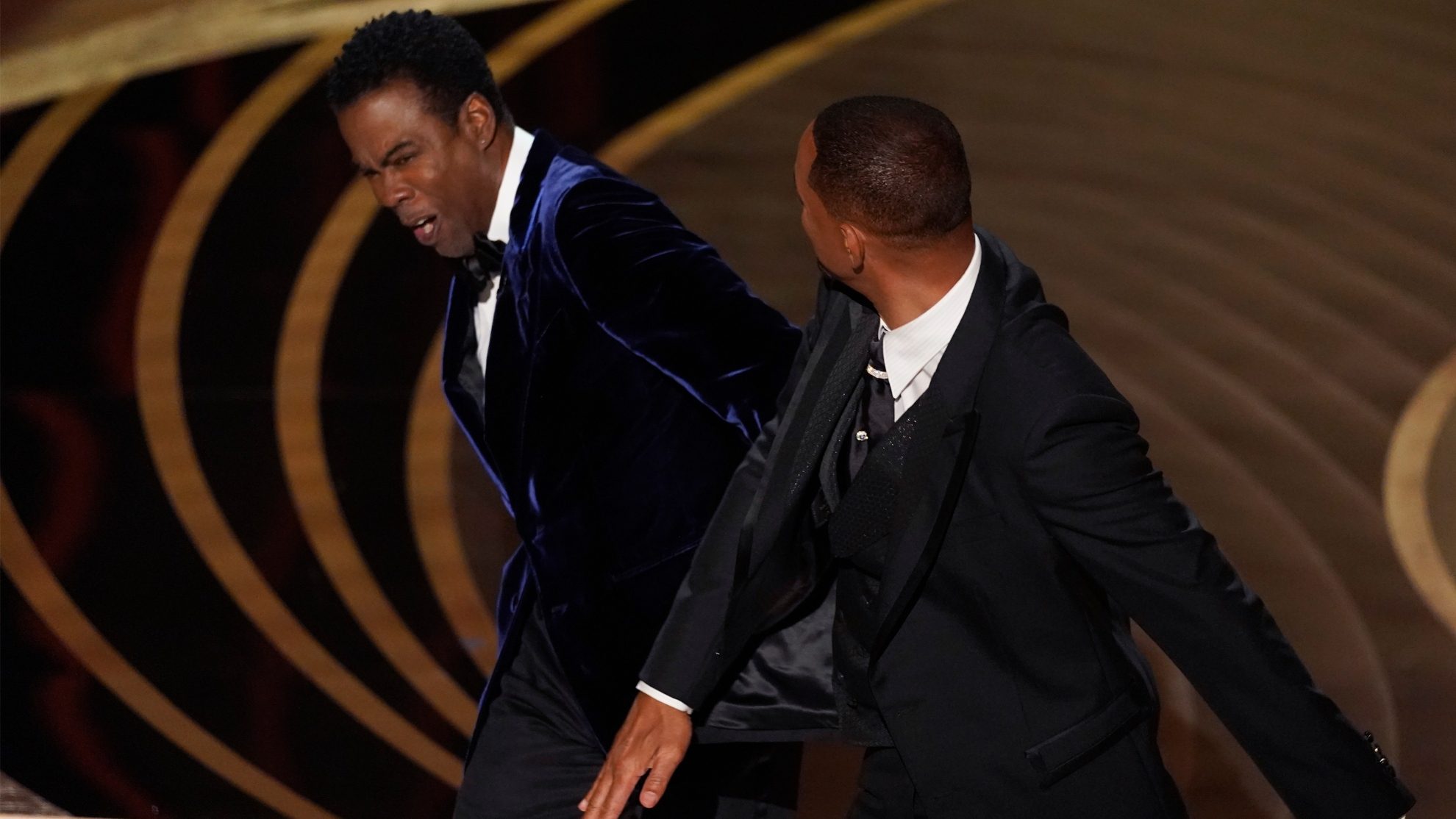 Has the Academy solved the Oscars viewership problem? At last night’s event (which is barely an event anymore, something painful for a guy who used to love the Oscars to say), comedy legend Chris Rock did what comedians do as he presented an award and made jokes – and to break from the ones I imagine co-host Amy Schumer delivered, his were funny. But then, he made a big mistake: he took a relatively innocuous jab at Jada Pinkett Smith, who appears to be one of the most self-serious human beings on Earth. Then, her husband, superstar Will Smith, strode to the stage and smacked Chris Rock in the face before returning to his seat as coolly as possible – till he broke down once again and admonished Rock to “keep [his] wife’s name out your fucking mouth!”  For his part, Rock maintained his composure and still managed to keep the laughs rolling. Check out the clip below (don’t mind the Japanese translation in the latter half):

Well, then. There’s, surprisingly, a lot to talk about in the aftermath of this slap fight. First, there’s speculation that this was staged as a way for the Oscars to seem relevant and get people to watch them again – although, since it happened during the broadcast, I guess they’d be hoping that reviving Celebrity Death Match will make people want to watch 2023’s ceremony. While I wouldn’t put something like that past Hollywood, I don’t believe it’s the case here. Look at Will Smith’s immediate reaction to Chris Rock’s joke about his wife’s hair: he’s laughing, like everyone else in the room! Well, almost everyone; Jada doesn’t seem amused, and I think that’s what spurred his open-handed attempt at chivalry. So, was this an “Uh oh, I hope she didn’t see me laughing” Hail Mary to stay in his wife’s good graces? Maybe, but as many are currently speculating, there could be a lot of pain and humiliation behind it, none of which was caused by Chris Rock joking about a Demi Moore movie from the 90s. It’s pretty much understood that Will and Jada have an open marriage, and based on his facial expressions when talking about it and the fact that she’s the only one who seems to like bragging about it for Z-snaps, it’s probably a one-sided affair (or series of affairs, I suppose). We all saw Will crying in that video and read the GQ interview where it seemed like he was talking himself into believing his celebration of their lifestyle.

So, by all appearances, this is a man whose wife steps out on him – whether they “have an agreement” or not – and he swallows the hurt because he probably loves her. On top of that, the whole world now knows about Jada’s extra-marital activities, and the former king of summer blockbusters is becoming a laughing stock. Could Chris Rock’s joke have been an opportunity for him to prove himself “worthy” of Jada? Was it his way of saying to his wife, “Those guys won’t protect you like I will?” I think that’s entirely possible, and certainly more likely than this being staged by a group of snobs who think the people not tuning in to their finger-wagging diatribes disguised as awards shows are the problem. (Seriously, increasing viewership is as easy as telling the stars to refrain from lecturing the little people about the environment you pollute more than they do in one private jet flight or whatever else you’re pretending to care about this week.) Notice that when Smith returns to his seat, he’s crying. This is not a well man, and his explanation for his tears when he accepts the Best Actor Oscar doesn’t – apologies – hold water. It’s hard not to feel bad for him or empathize with his desperation, even if his actions were wrong.

Chris Rock declined to press charges against Smith because he’s a man and was barely fazed by the slap. (The outpouring of people online who lament this is pathetic and proof positive that an overabundance of masculinity is not our real problem.) If anything, his reaction makes the incident funnier than it probably should be, which further cements him as an incredible comedian. Also funny are the memes, which are currently flying on Twitter and will likely be around for a long time. If you follow anyone even remotely funny (and if you don’t, why even bother with Twitter?), you’ll see a slew of them as soon as you open the app. The regular jokes are hilarious, too – here are a couple of my faves so far, and Raz0rFist is, unsurprisingly, on a roll. But my biggest takeaway from the slap is this: between Jada calling everybody a racist when Will wasn’t nominated for that lousy-looking movie in 2015 (and kicking off the “Oscars So White” movement) to Will slapping a comedian because Jada didn’t find a joke amusing, can you imagine how excruciating it must be to hang out with these people? Their skin is thinner than papier-mâché; if you met them at a party, you’d be walking on eggshells till they finally left – Will for their home and Jada, presumably, for her date. Before he psychologically tortured the Smiths with a GI Jane reference, Chris Rock made a joke about another married celebrity couple, Javier Bardem and Penelope Cruz, and they laughed like normal human beings. Whatever the deep-seated reasons behind Will’s reaction, it’s clear these two are better off avoided.

What did you think of the slap heard ‘round the entertainment news cycle? Did Will Smith snap, or was it a clever(ish) ruse to get people to tune into the Oscars next year? Is it possible that this incident will become a movie that will win an Oscar and cause some kind of universe-destroying paradox? Let us know in the comments, and stay tuned to Geeks + Gamers for more entertainment news!

And while you’re here, check out Ryan’s and Jeremy’s reactions to the viral event on the Geeks + Gamers YouTube channel!

I still don’t care about Hollywood. I hope viewership continues to plummet for the Oscars.

This year was slightly above last year, but nowhere near what it used to be. Ryan made a video about it, if you’re interested: