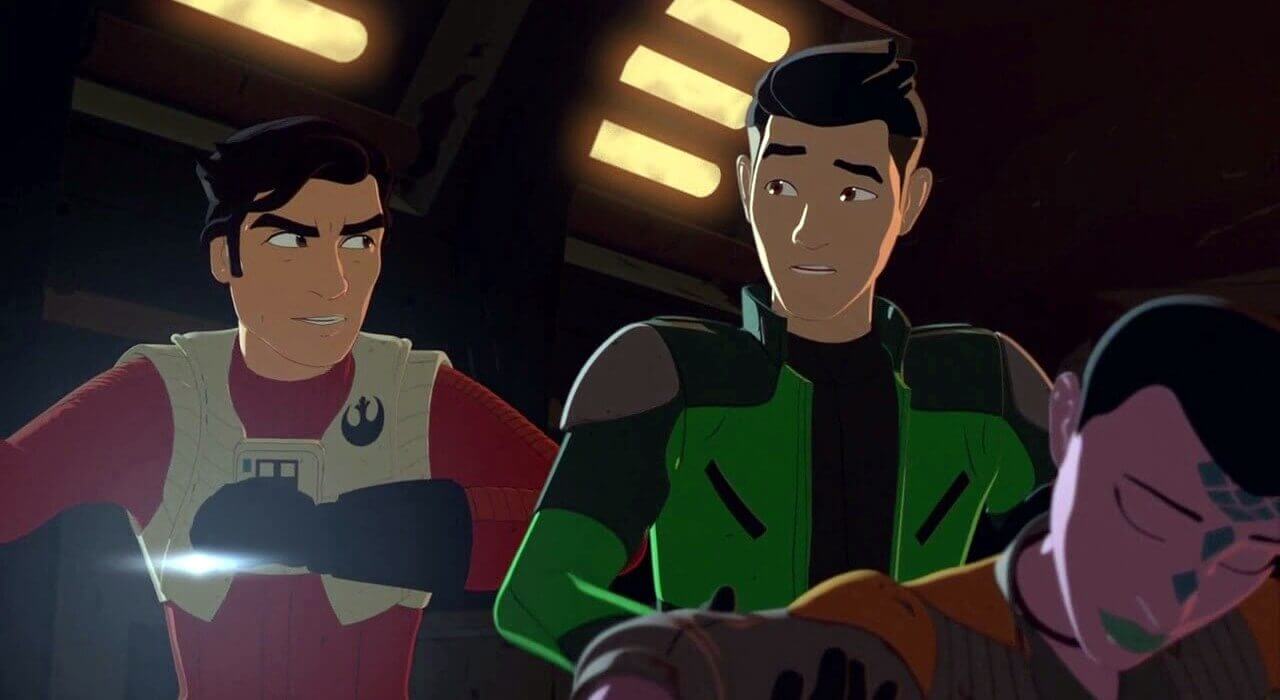 This week on Resistance, Yeager wakes Kaz up, despite his protestations. Kaz tries to make a cup of what looks like coffee, but can’t operate the maker, and Tam has to do it for him. Yeager meets up with Poe, who congratulates Kaz on a job well done and gifts him an X-wing ship. Kaz reluctantly air-jumps into his new ship, and the two pilots converse while flying through an asteroid field. They come across a destroyed pirate ship, and BB-8 says there are several survivors aboard. The pilots and their droids watch as two pirates are devoured by a large monster. As they continue looking around, they’re attacked by something Poe identifies as monkey lizards. Poe kills one, scaring the other one away.  They find a girl unconscious in a crate, and soon they run into the monster. It looks to be a huge monkey lizard, but apparently it’s called a Kowakian Ape. They barely escape its grasp, taking the woman with them. Despite Yeager’s misgivings, he and Laz take her home as Poe goes back his own way. Kaz registers the woman, named Synara, with the authorities, and she thanks him but says she likes to be alone. Yeager says that whatever happens, Kaz is responsible for her. Meanwhile, she speaks with her apparent boss via hologram: turns out Synara was one of the pirates, not an innocent crew member. Her boss tasks her with blending in so she can eventually steal from the Colossus.

“Signal From Sector Six” is the seventh episode in the newest animated Star Wars series, and as such I’m struck by how little plot there has been so far in the show. Kaz keeps trusting untrustworthy people and getting burned, and that’s really all that’s happened. Of course, every now and then someone from the First Order will show up to remind us how mean they are, but you don’t really feel them as a lurking, troubling presence like you do the Empire in Rebels and the Separatists in The Clone Wars. Although this is more a fault with the movies, I also wish that either there was a more defined difference between the Empire and the First Order or that they used the same name. It’s difficult to take the not-Empire seriously as a threat when Kaz spends most of his time worrying about money and not making Tam angry. If you look at Luke in the original trilogy, of course he had everyday concerns like working on the farm and wanting to go to the academy. But once crap hit the fan, the story shifted focus completely to his journey. Half the time it feels like Kazuta might as well be on a journey to the toilet. Even in his smaller struggles, there could be tension; plenty of great movies are about simple things like a family coming together, or seemingly opposite people becoming friends. They don’t manage to do this in Resistance because Kazuta and his friends aren’t lovable or complex at all, so it’s hard to care what happens to them. 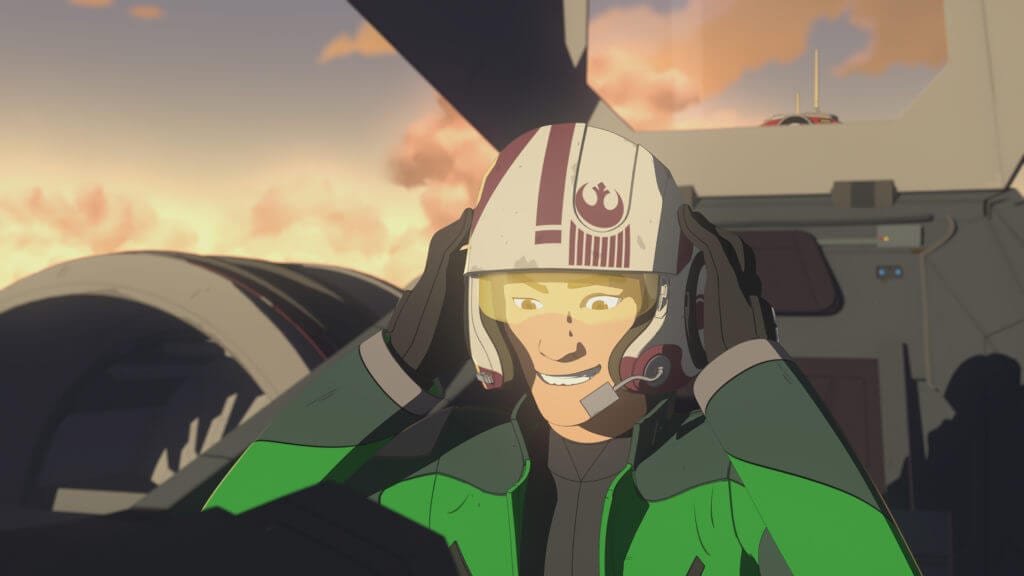 If anything, “Signal From Sector Six” further alienates the audience from the central characters by making their personalities even less defined and interesting. Yeager has been my favorite character up to this point (regardless of what little that means in this case), but I found him unlikable and inconsistent in “Signal From Sector Six.”  His reluctance to help Poe by helping Synara doesn’t seem very heroic; of course, in the end, we find out that she’s one of the pirates, but I have a feeling she’ll end up being good in the end. I also found it strange that he was shocked when they brought a survivor back at all; what did he think Poe’s plan was; going into a destroyed, seemingly abandoned pirate ship? If not to look for survivors, I don’t understand what Yeager thought they were doing. Perhaps he really was as clueless as he let on at the beginning when he dodged Kaz’s questions. In the end, Yeager also decides that whatever Synara potentially does wrong in the future is Kazuta’s fault and responsibility. That hardly seems fair, as it was Poe’s idea to save her and he’s the one who asked Yeager to shelter her. In what way is Kaz responsible for her? And, regardless of all that, why does Yeager want to punish him for trying to do the right thing? Apparently, according to this character who previously seemed honorable and wise, they should have just left her to die, whether she’s good or bad. In the case of Kaz, he remains much the same bumbling fool we’ve previously seen. The inconsistency with him lies in how the other characters treat him: Despite meeting him very recently, Tam and Yeager treat him like they expect much better than what he’s been doing in the shop. Poe constantly gushes about what a great spy he is and gives him cool missions, and frankly, I don’t get it. Like I said regarding “The Children of Tehar” last week, why should he be praised for stupidity and impetuousness?  Resistance goes out of its way to show how dumb and childish he is, and all of the other characters see it (even if their reactions don’t make sense), but Poe thinks he’s the bee’s knees. Since Poe hates monkeys so much, he should hate Kazuta for acting like one, only dumber and without an excuse. The extent to which they go in showing his disdain for the creatures is ludicrous, by the way, and not humorous.

He even sees this behavior in action in “Signal From Sector Six,” such as Kaz screaming and having to be told to be quiet as not to attract the monkeys. Kaz also motions to set Synara down, and Poe has to insist that they carry her and continue out of the ship. Kazuta has no relatable or admirable qualities, and yet Poe, who we’re supposed to see as this seasoned war hero, is his biggest cheerleader. Speaking of Poe, there’s also a significant inconsistency in his character here compared to the films. In The Force Awakens, they show him as a badass and an essential part of the Resistance. Then, in The Last Jedi, they show him as a big-headed man-boy who has to be tamed by Laura Dern (although I consider that her fault, but that’s not the movie’s viewpoint, so we’ll ignore that for these purposes). Now, in Resistance, not only is he the main selling point for watching the show, but they make him out to be a big man within the Resistance and have enough clout to recruit people and give them instructions/missions. What even is the character of Poe? He reminds me of Elizabeth Swann in the Pirates of the Caribbean movies, who went from a proper lady to a lying backstabber to a radical feminist’s dream of a Pirate King. Characters like this are less like people and more like plot devices; they change between installments of the story to serve whatever the given writer wishes to accomplish. I hate it because then they don’t have a defined personality or goal. It’s extremely lazy, and it makes the story less believable. 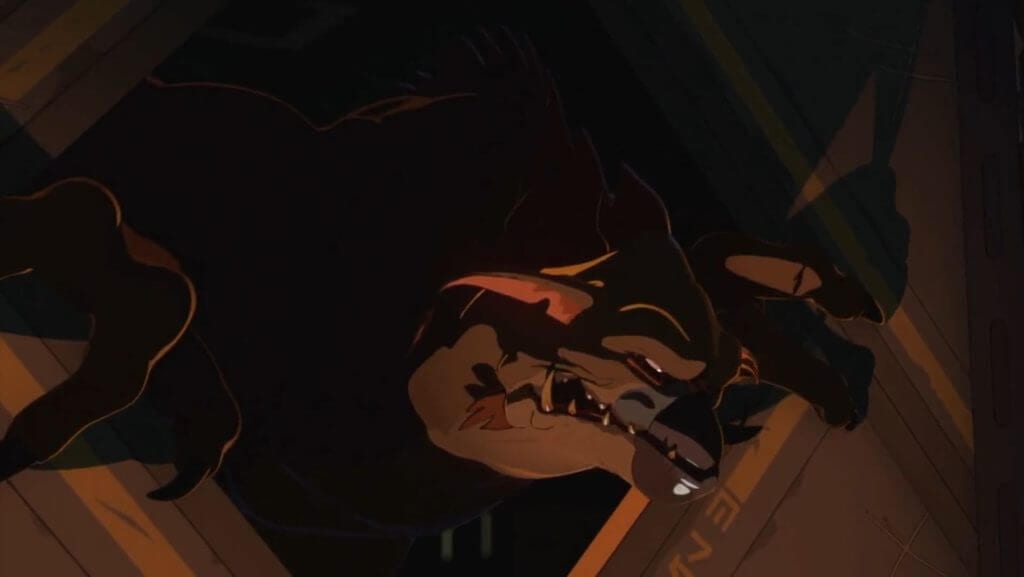 Although it wasn’t a big deal win “Signal From Sector Six,” I don’t like Poe’s other droid, CB-23. She clashes with BB-8, and it feels almost like they’re trying to re-create the banter between R2-D2 and C-3P0. Of course, this doesn’t work, and one is left wishing this droid wasn’t in the already annoying mix of characters. Normally, when a droid speaks, a humanoid character or a translator like C-3P0 will fill the audience in on what they’re saying. However, there’s a scene where these two beep and boop back and forth at each other for a solid minute until Kaz says something about how good it is that they’re getting along now. What were they saying? Why do they suddenly decide to be friends? The audience may never know because Resistance thought it was important enough to show but not explain. I like Synara’s design and name, but not the accent they give her. It sounds very much like the actress was just instructed to make her sound exotic, and it’s distracting.

Overall, Resistance delivers another terrible offering with “Signal From Sector Six.” I already wasn’t crazy about these characters, but it feels like the show can’t even decide who Yeager and Kaz are as people. Tam’s still a forever-PMSing stick in the mud; I guess it was a show of mercy to only show her in the very beginning. Poe’s main fault is being so different from his portrayal in either Episode VII or VIII, but even within the series, he doesn’t make much sense as a character. Aside from having a nonexistent plot and irritating, soulless characters, Resistance also fails to appeal to the senses with its ugly animation and bland musical score. The voice actors aren’t distractingly bad (for the most part), and it may be the fault of the writers and directors for giving them nothing to work with, but they don’t make the characters their own. The line delivery is very bland and by-the-numbers. I can’t imagine why even a small child would enjoy this. It doesn’t feel like Star Wars, it doesn’t feel like a cohesive story, and it doesn’t feel like anybody behind the scenes cares about either of those things. Maybe if you’re a masochist who needs to burn up 22 minutes of precious time, I’d say give it a shot; otherwise, I’d recommend watching pretty much anything else available.

Resistance delivers another terrible offering with “Signal From Sector Six.” I already wasn’t crazy about these characters, but it feels like the show can’t even decide who Yeager and Kaz are as people. Tam’s still a forever-PMSing stick in the mud; I guess it was a show of mercy to only show her in the very beginning. Poe’s main fault is being so different from his portrayal in either Episode VII or VIII, but even within the series he doesn’t make much sense as a character. Aside from having a nonexistent plot and irritating, soulless characters, Resistance also fails to appeal to the senses with its ugly animation and bland musical score. The voice actors aren’t distractingly bad (for the most part), and it may be the fault of the writers and directors for giving them nothing to work with, but they don’t make the characters their own. The line delivery is very bland and by-the-numbers. I can’t imagine why even a small child would enjoy this.