Suspiria (1977) is a giallo/supernatural horror movie directed by Dario Argento. The film follows an American dancer as she travels to Germany in order to attend one of the foremost dance academies in the world. When she arrives, a wave of vicious murders and violent occurrences flow in, and it is up to her to discover why. It is a wonderful introduction into the genre of giallo film, an Italian suspense thriller or horror film that generally has mystery elements. The cast is excellent, with Jessica Harper leading the film fantastically. On top of being very pretty, she is also clearly intelligent. She does not figure out the mystery of this film by accident. Instead, she is constantly doing research and detective work throughout the film, remembering key information and using her awareness to figure out the direction of footsteps. Argento takes full advantage of her as a performer, drawing a deep performance from her driven by Harper’s deep, emotive eyes. Her character, Suzy Bannion, is one of horror’s greatest protagonists. Miss Tanner is entertaining as the crazed dance teacher, while also having a deeply sinister air about her at all times. Suzy’s friend Sara, who is pretty integral to the discovery of the mystery, is definitely a standout. Despite some ADR mixing being a little bit off throughout the film, there is very little to criticize in this phenomenal film. Suspiria is a film everyone should experience at least once in their lives.

A review of this movie would be incomplete without a reference to Goblin’s incredible score. It is atmospheric, spine-chilling, and, at times absolutely mesmerizing. The main theme of the film is one of the most gorgeous pieces of musical score in a film ever. It lures you into a dream-like state until you hear the demonic sounding voices in the background. It is beautifully scary and the film wouldn’t be nearly as horrifying without it.

The cinematography and lighting in Suspiria is another aspect that makes this film stand apart from its genre. The camera is almost its own character. The way it glides about and is not afraid to get up close during some of the grisliest scenes of the film is fascinating. Dario Argento uses close ups expertly in the film. He uses the terrified faces of his protagonists, their eyes in particular, to such great effect. It is legitimately unnerving. My favorite part of Suspiria is that in the opening of the film, the lighting, cinematography, and score go hand in hand to visually convey story. Some have called the musical choices here inconsistent, but in my opinion, the ways in which cues change and morph with every scene is brilliant.

The lighting of the film, again, becomes its own character in this movie, symbolizing and bringing to life the deeply evil supernatural forces at foot. In Suspiria‘s opening scene, Suzy is leaving the real world and entering into a dream state. During the day, the light is more natural and brings a sense of safety, but as soon as the sun goes down, the lighting becomes more vibrant and almost overpowering. For some, this might be irritating, as there are scenes when reddish hues get so intense that they almost wash out. Red is almost like a living entity, hunting without remorse or compassion. The use of lighting and color in this movie deserves to be taught in film classes.

Be forewarned: there is some pretty brutal stuff in this film. At one point, a character is stabbed graphically in the heart, thrown through a skylight, and said skylight pins another character’s head to the ground. Throats are slit, dogs rip throats out, and overall, its not a pretty sight. The blood you see in Suspiria is unnaturally bright, as opposed to the darker red blood we are accustomed to seeing onscreen. This is another thing that might irritate people, as it looks unreal. However, I believe that this just adds to the fairy tale aspects of this film. It is a fever dream of a film, or rather a fever nightmare. Conceivably, if you’re in someone’s dream and have objective thought, things might seem off. I think some of the day scenes, in more natural light and without the air of the supernatural lingering over Suzy, are what really allow me to believe that everything surreal is actually happening, even with all the things that should take me out of the film. 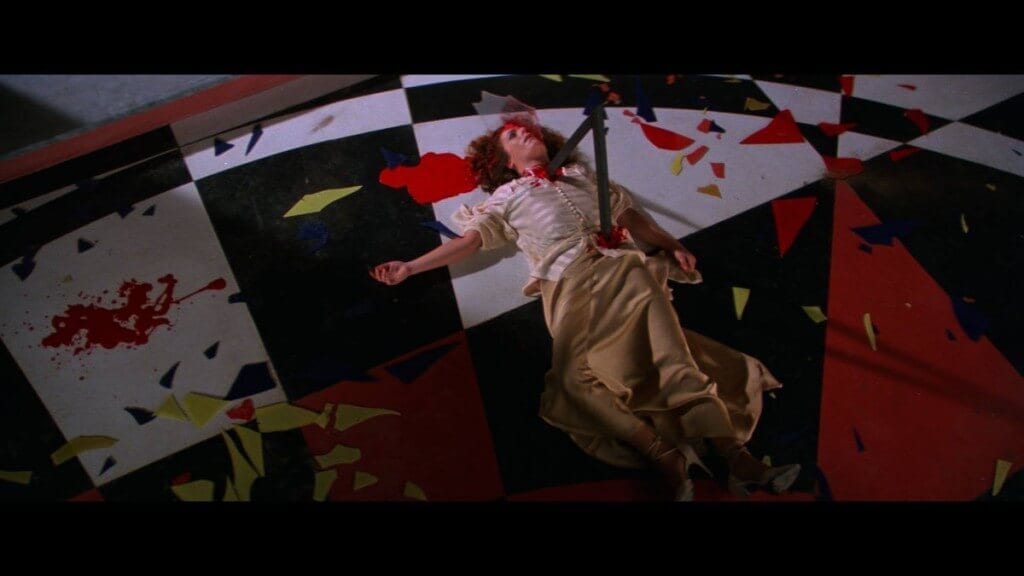 As stated earlier, there is some ADR in the film that doesn’t always line up with what the actors are saying, and the voices don’t sound like they would naturally coming from their actors. One example of that point is that Udo Kier, who is seen in many, many movies playing a German character, is speaking with an American accent. To be clear, this only caught my attention because I recognized him and knew that his voice did not sound anything like what it does here. But all of these oddities come back to how odd everything feels in general. ADR usually distracts me when its off, but in Suspiria, it oddly feels like it is integral to the film.

Is Suspiria scary in the traditional or modern sense? Not particularly. Suspiria is more about ratcheting up tension and creating a sense of unease than going for all-out scares. It is graphically violent at times, but the score and masterful shot placement really magnifies the sense of creepiness that permeates the film. I found the final twelve minutes, especially on my first time seeing the film, incredibly unnerving. There is a reveal for a dead character that made me so uncomfortable and honestly freaked me out. Even on this rewatch, I still found myself shaking my head and shouting “nope..nope..NOPE.” when this character reappeared in the state that he/she was in.

Overall, Suspiria is a mesmerizing, creepy, and beautiful film in the vein of a brutally violent Alice in Wonderland or a Brothers Grimm fairytale. It has gorgeous cinematography, a fantastic score, and one of my favorite horror movie leads of all time. For some, it will suffer from some stilted ADR and the fact that vividness of the color might be overkill. These weaknesses just added to the dreamlike quality of the film and I can do nothing but wholeheartedly recommend seeing Suspira, even if only once.