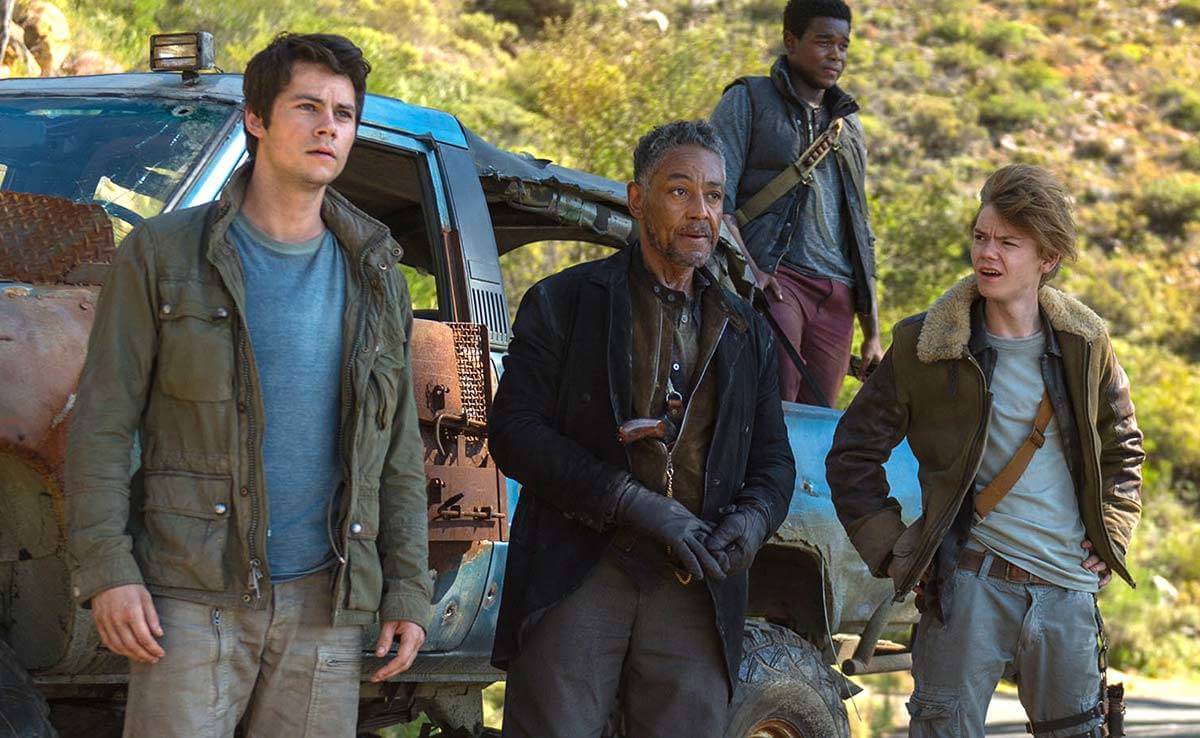 The Maze Runner: The Death Cure centers around Thomas and the remaining Gladers six months after the demoralizing events of the previous film, with Thomas chasing down the whereabouts of their captive friend. Meanwhile, Teresa is searching frantically for the titular cure.

The script and story of Death Cure is pretty good overall. Thomas’ motivations are clearly defined, and the writers do a great job at bringing all arcs involved to a pretty satisfying conclusion. The stakes feel high, even though their mission is smaller in scale: save their friend. The characters, at this point in the trilogy, really have a great sense of camaraderie, and their chemistry is so good that no matter what, it feels like an end-of-the-world scenario to me. It’s not perfect, however. The film does definitely fall back on some well tread tropes of YA adaptations, many of which you’ll most likely see coming. It’s not that they aren’t well executed; it’s just that they’re familiar. 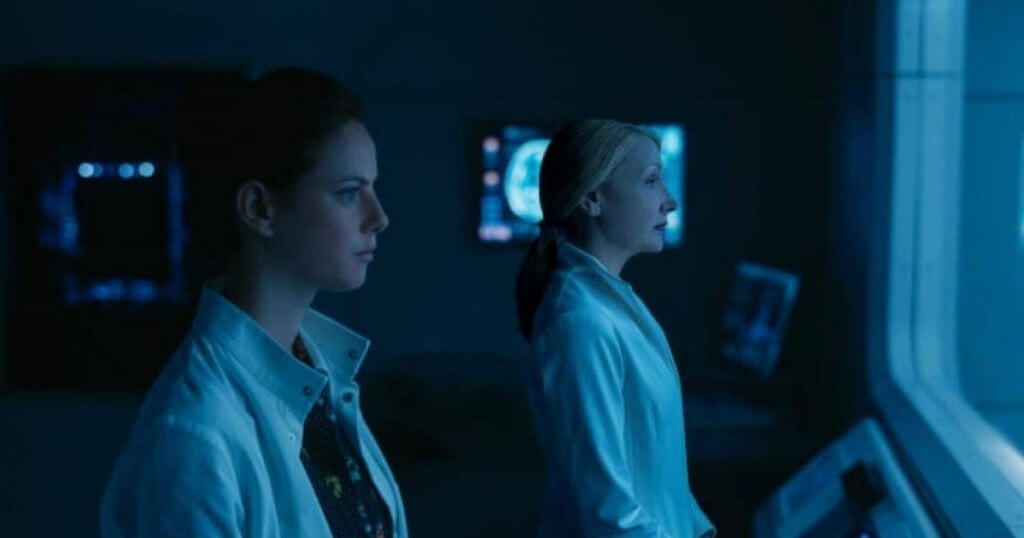 The cast is stellar, led once again by the incredibly talented Dylan O’Brien, who is on his A-Game in Death Cure. He’s very obviously a hundred percent committed to delivering the best performance he can, both dramatically and physically. He does great work in the emotional scenes (one in particular that had me in tears), as well as being equally convincing in the action setpieces. He pulls off that badass but sensitive hero really well. He also has such amazing chemistry with every member of the cast, but most importantly with Newt. Speaking of, Thomas-Brodie Sangster is fantastic in this, possibly better than in the previous two films. Newt is probably my favorite Glader other than Thomas, and Sangster’s performance is a huge reason why. He’s so convincing in how much he cares about Thomas and his fellow Gladers in jeopardy, and when he puts his life on the line to protect and save them, it’s incredibly powerful. Ki Hong Lee doesn’t get a lot of screen time for a good portion of the film, but when he does, he makes the most of every moment. Lee is great, and has been consistently great in the prior two films as well. His role isn’t huge, but it is pivotal. He’s integral to the progression of the plot, driving our heroes further and further. He really shines in the third act as well, when he gets more to do physically. Kaya Scodelario doesn’t get as much screen time this time around either, but she still plays a pretty important role in the film. Scodelario does a good job portraying Teresa’s murky moral center, as well as her dedication to finding a cure. She’s believable emotionally, especially when paired with O’Brien in a few key scenes.

Rosa Salazar is great, doing very convincing work both dramatically and in the action setpieces. She isn’t given as much important stuff to do as she was in Scorch Trials, but she definitely holds her own in the stacked cast. Giancarlo Esposito is sadly under utilized, but does really good with what he’s given. He’s got such a smooth cadence to his delivery and so much charisma that he’s a breeze to watch work. Aiden Gillen is suitably slimy as Janson, truly exemplifying how good he is at playing bad guys. He delivers the dialogue given to him with such a devilish, sinister edge that I couldn’t help but find him compelling, even if he needed more fleshing out. Gillen chews scenery throughout the film, and I loved that. The rest of the cast is filled out by other excellent performers, such as Barry Pepper, Nathalie Emmanuel, Walton Goggins, Catharine McNamara, and Patricia Clarkson. All of these performers do a really good job with everything they are given. There are no weak links in the cast.

The action in Death Cure is astonishingly well staged, shot, and performed. The opening train heist in particular is riveting, but the finale is impressively staged. For all the action in the previous two films, that final battle is much larger scale than perhaps any action scene in the Maze Runner franchise. Wes Ball does a great job of showing what is going on in good detail, the camera work in these sequences is astonishingly good, and they do a great job of having diverse action. There’s hand-to-hand combat, foot chases, shootouts, large scale battles, and vehicle chases. It’s not the same sequence over and over, and Ball helms them like a real pro. Is it the best action I’ve ever seen? No, but it’s impressive nonetheless. Pairing that with the astonishingly good visual effects, practical and not, it definitely feeds into how entertained I was.

The cinematography, lensed by Gyula Pados, is pretty great all around. Pados does an excellent job utilizing the lighting in the environment to really add to these shots. There’s one particular shot that is almost a silhouette shot of Thomas that I just plain loved. There are a couple of other ones that are seared into my head, some that I can’t comment on because they’re linked to spoilers. Pados also handles action well for the most part. There are some sequences that are a little shakier than they should be, and maybe the camera was too close in another, but overall the action is shot pretty damn well.

John Paesano’s musical score is fantastic. With each of these films, he’s gotten better and better. He knows how to twist the right scene to make it all the more emotionally powerful, and he especially has his finger on the pulse of intensifying action scenes. There are some big sequences in this film that simply wouldn’t work as well without his musical score, particularly the final battle and some of the emotional beats. These are already great scenes on their own, but the music really takes them to a higher level.

As far as negatives, I will say that there are certain arcs that don’t come together as well as they should, especially between Thomas and Teresa. The way their story together concludes works, but would have been even stronger given more time with Teresa especially. We needed more perspective on her mindset while at WCKD. Another plot point that really needed fleshing out had to do with Thomas and his place in all of this. I won’t spoil it, although you’ll probably see it coming, but there’s an unanswered question that this plot point begs that really irked me. I do also think the film is overlong; when the final assault started, I thought we were in the last twenty or thirty minutes, but it definitely felt like it might have been almost an hour. Don’t get me wrong; the final assault is technically incredibly well made. It just feels sort of uneven.

Overall, The Maze Runner: The Death Cure is a satisfying conclusion to the trilogy. It’s filled with incredibly entertaining action, stellar special effects, great performances, and great characters. Its finale might be a little too long and some of the arcs could have used better fleshing out, but if you’re a fan of the first two, this one won’t disappoint. I will caution, though, that it will not convert those who already don’t like these films and aren’t invested in these characters. 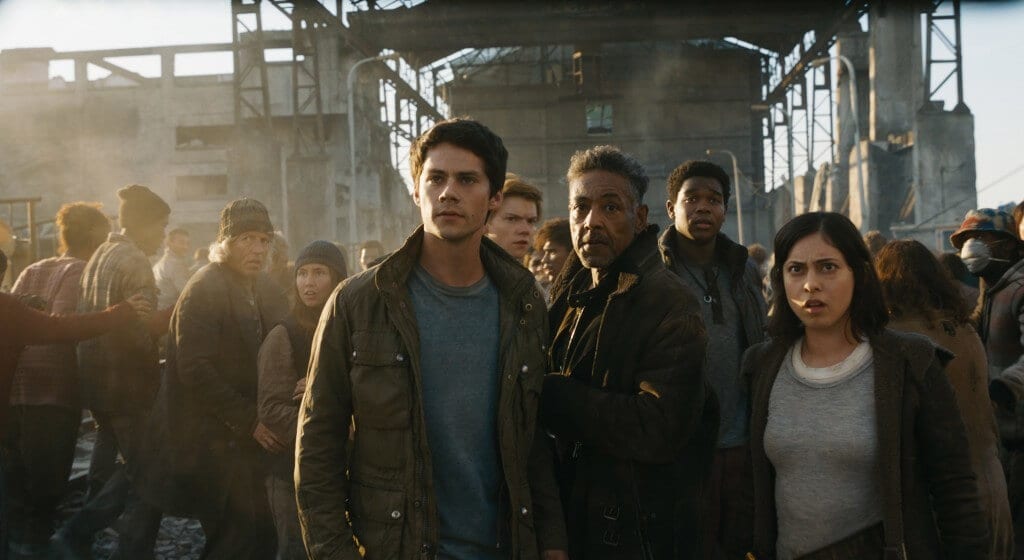 What did ou think of The Maze Runner: The Death Cure? Let me know in the mments below! Stay nerdy everyone!

The Maze Runner: The Death Cure

The Maze Runner: The Death Cure will satisfy franchise fans with great action, high stakes, and an emotional conclusion despite unevenness and story issues.