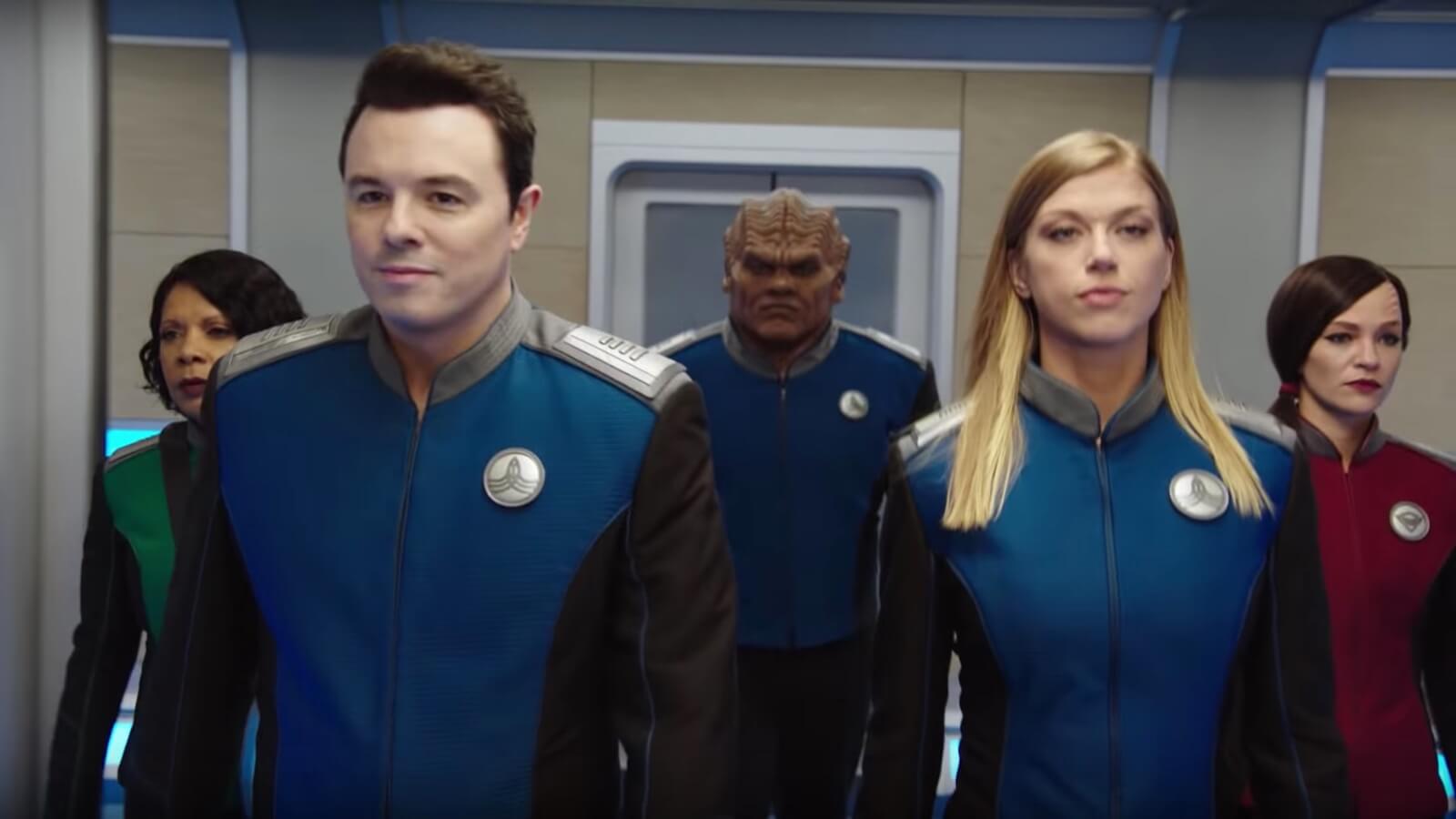 Yesterday I attended the Orville panel at the New York Comic Con (replete with a press pass, thanks to Gary from Nerdrotic and Viviane from Hey Viv). It’s the first convention panel I’ve ever attended (I’ve been to NYCC before, but always seem to spend the day looking for people), and a great way to get my feet wet; amusingly, among the different songs played before the Orville NYCC panel was “9 to 5,” the rallying anthem of the Moclan women in the episode “Sanctuary.” Unfortunately, they wouldn’t let us take pictures, but the video intro is available online, and you can check it out below:

After the video, executive producer David A. Goodman took the stage to moderate the Orville NYCC panel, introducing cast members Adrianne Palicki, Penny Johnson Jerald, Scott Grimes, Peter Macon, J. Lee, Mark Jackson, Chad L. Coleman, and Jessica Szohr, as well as director John Cassar. Upon hearing his name called, Scott Grimes ran in front of the stage to high-five fans before taking his seat, setting the fun, light mood early. Goodman explained that Seth MacFarlane couldn’t be there due to his commitments to various TV shows and other ventures; the way this was framed (Goodman telling him fans wouldn’t understand) made me think MacFarlane really was in attendance and his presence kept a secret, but it wasn’t to be.

The discussion at the Orville NYCC panel started with Goodman saying that there was very little anyone could say about season 3, and that most didn’t know much anyway. Cassar explained that he and Goodman were the only ones on stage who knew everything and that we can expect space battles, parties, Bortus singing again, and half the crew getting wet. Season 3 will be entirely like the epic mid-season action-fest “Identity,” and it will have double the production schedule of the previous two seasons. Goodman added that Hulu is affording them more freedom.

Next, they talked about the cast and some of the acting challenges they’ve faced. Cassar said that for “Identity,” the crew took “Kaylon Class,” wherein Mark Jackson showed the new Kaylon actors how to move like a Kaylon. Jackson gave a demonstration on stage, in particular simulating the way Isaac carries and moves his hands. Jackson also revealed that many of the Kaylon actors were dancers, which helped them learn the movements quickly. Adrianne Palicki talked about playing a younger version of herself in the final two episodes of last season, “Tomorrow, and Tomorrow, and Tomorrow” and “The Road Not Taken.” She endeavored to make Young Kelly subtly different from Regular Kelly, such as by not talking from her diaphragm. Jackson said that Palicki tried multiple wigs for the part as well. Peter Macon and Chad L. Coleman joked about Bortus and Klyden fighting. Penny Johnson Jerald said she and Mark Jackson rehearsed making love as Claire and Isaac, and that she had to make her “adorable friend Mark” feel desirable to her by finding out what makes him “hot;” she ultimately focused on his “ruby red” lips, which apparently taste like grapefruit. Jerald initially thought they would be naked, thanks to an assistant director who assured her it would be a closed set. When they found out they wouldn’t be nude, Jackson realized that he’d worked out strenuously – mostly by swimming – for nothing. Afterward, he and Jerald “pigged out” on doughnuts. Macon joked that, on Hulu, the non-nudity could change. When asked about joining an established cast, Jessica Szohr laughingly said she typically enters shows after the beginning, and that the Orville cast was welcoming, and the great writing helped her become acclimated. Grimes said that she fit right in. Jerald then revealed that Szohr often falls asleep, even mid-sentence. One time, she fell asleep at home, and they couldn’t wake her up. After that, Grimes began sending her texts almost every day, saying, “JESSICA!!!!” 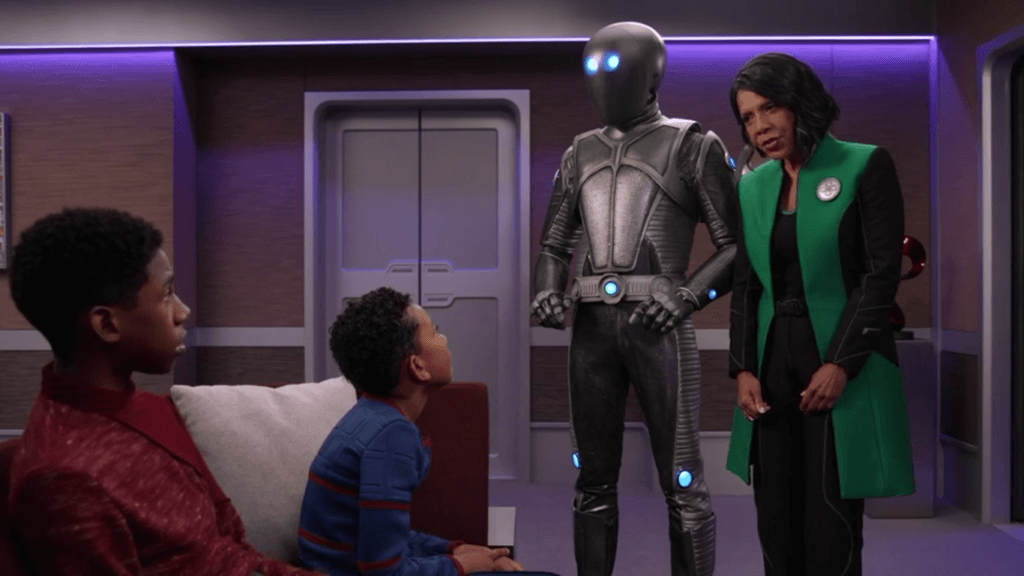 The Orville NYCC panel then opened the floor to some audience questions. The early answers went fairly quickly: Hulu will release the episodes of season 3 week by week, not all at once;  they have no idea if there will be Hulu livetweet for each episode;  the Moclan arc is not intentionally rooted in an episode of Star Trek: The Next Generation (I didn’t catch which episode the guy mentioned, but a little internet digging suggests it was probably “The Outcast”); the Agents of SHIELD people haven’t call Adrianne Palicki about appearing in the final season; Scott Grimes’ tattoo is Tibetan for “son;” Jerald said the cast and crew of the show become voices for people represented in their stories, showing different kinds of people coming together; Jackson loves finding out how the show touches people’s lives at cons.

The next bit was funny. Answering a question, Goodman said there wouldn’t be a musical episode. Grimes believes that’s wise because to do so would be jumping the shark, but if they do one, he thinks that the Orville crew could go to a planet where the inhabitants speak in song. Jerald then jumped in, outraged, as she said she had pitched that very idea to Seth MacFarlane on the set and Scott is a thief. Macon then suggests an episode with puppets (causing me to think he is a Buffy the Vampire Slayer and Angel fan, which makes me like him even more). Grimes then sings “Goodbye” to Jackson like he did in “Identity” (after a brief line of “I Want Your Sex”), then simulates… another kind of oral pleasure. The whole Orville NYCC panel drew major laughs from the crowd, but this section was one of the biggest.

Moving along, Goodman said there will be no American Dad references in season 3. Someone shouted, “Do a movie,” and they all said whether they do one is up to the fans. When asked if there’s any way to bring back Alara without getting rid of Tala (good question, fella; there are pickle jars that need opening), Goodman said that Tala will never be replaced, but they’d love for Alara to come back if Halston Sage can work around her new show, Prodigal Son. The idea of the captain and first officer sitting next to each other is intended to denote an equal partnership. 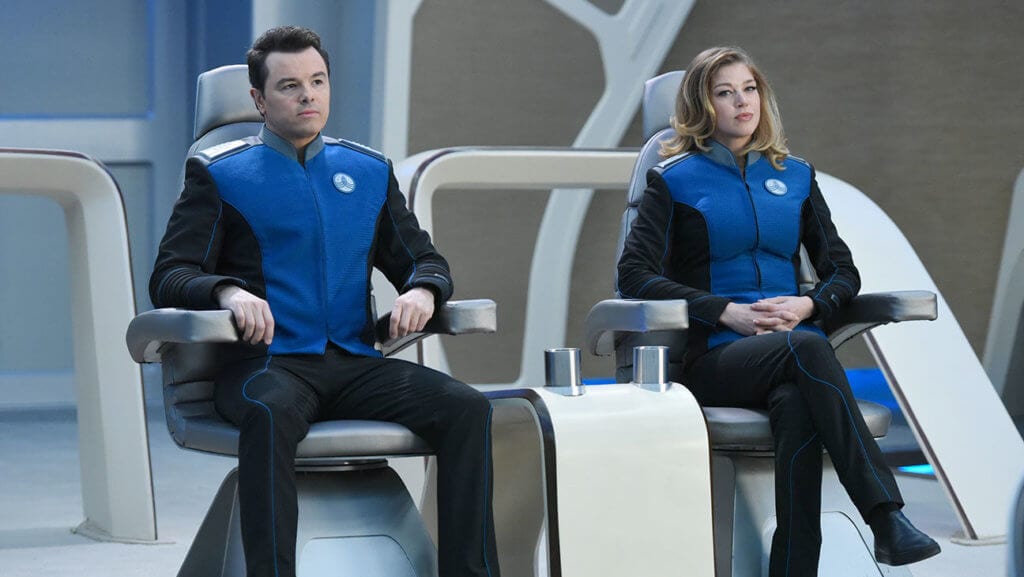 Someone then asked the Orville NYCC panel what everyone’s favorite episodes were, and it made me laugh a bit that many of them couldn’t name the episodes. Cassar’s is “Krill. “Szohr’s is “the time capsule episode” (“Lasting Impressions“). Chad L. Coleman’s is “the cigarette episode” (also “Lasting Impressions”). Jackson’s is “the sex addition episode” (“Primal Urges“).Macon’s is also “the sex addiction episode” (“Primal Urges;” he also revealed that the guard actually spat in his face during one of the simulations). Grimes’ is “Minority Rule,” and he also praised Jon Cassar for his directing talents, particularly when it comes to action. Jerald’s is “the episode where Claire has to find her kids” (“Into the Fold”); Palicki’s is “Krill,” partly because she loved the humor. Grimes said that the Krill makeup is brutal, and he respects all the actors who have to deal with it every episode. Macon said that he hears fans mention “About a Girl” a lot as the moment where they finally understood the show. Goodman said he likes the second season finale (“The Road Not Taken”), partly because he wrote it.

There are no plans to bring the Critters into the show (“Right after the music episode” Goodman joked) – this question was asked because Scott Grimes was in the movie Critters. They don’t know if Bortus and Klyden will dance again in season 3, but this question led to Macon doing Bortus’ dance from “Lasting Impressions,” on which Palicki said Macon worked a long time. When a fan declared that The Orville is better than Star Trek: Discovery, Cassar diplomatically responded that there’s room for everybody on TV. The actors say they’ve all known Seth MacFarlane for a long time and that he’s very particular about every detail of the show, down to handpicking the cast and crew. Cassar told a story about a prop guy needing a wedding ring, so they all went crazy trying to find something that would look like a futuristic wedding ring, but Seth just said, “A wedding ring is a wedding ring.” Has a very particular view of the future he’s created. When Discovery came up again, they said the Star Trek community and Discovery fans support the show, with Jackson observing that they wouldn’t be here without Star Trek fans. Nobody was surprised about the level of drama in season 2; Macon recalls someone telling him that comedy can’t exist without tragedy, so both are necessary. Lee said that Jon Favreau worked with Seth to find the comedy/drama line when directing the pilot.

Another fan asked the perfect question of the Orville NYCC panel: “Who’s the best kisser, and why is it Bortus?” Macon responded that the essence of two Mocluns making love is to take two big rocks and put them in the dryer, then simulated the noise to thunderous laughter. Macon revealed that the cast found out about the move to Hulu ten minutes before everyone else did. Cassar said there will be ten more minutes per episode in season 3. Goodman said Fox was nice to let them go to Hulu because they wanted to pick up the show. Jerald laughed at the idea of telling Seth MacFarlane something should be done differently; Grimes then said that the producers are open to ideas, after which Lee suggested Jerald’s musical idea again as if it was his own, to Jerald’s feigned dismay. Goodman said that many writing decisions are made based on the cast’s strengths and weaknesses (with “weaknesses” said as a joke). 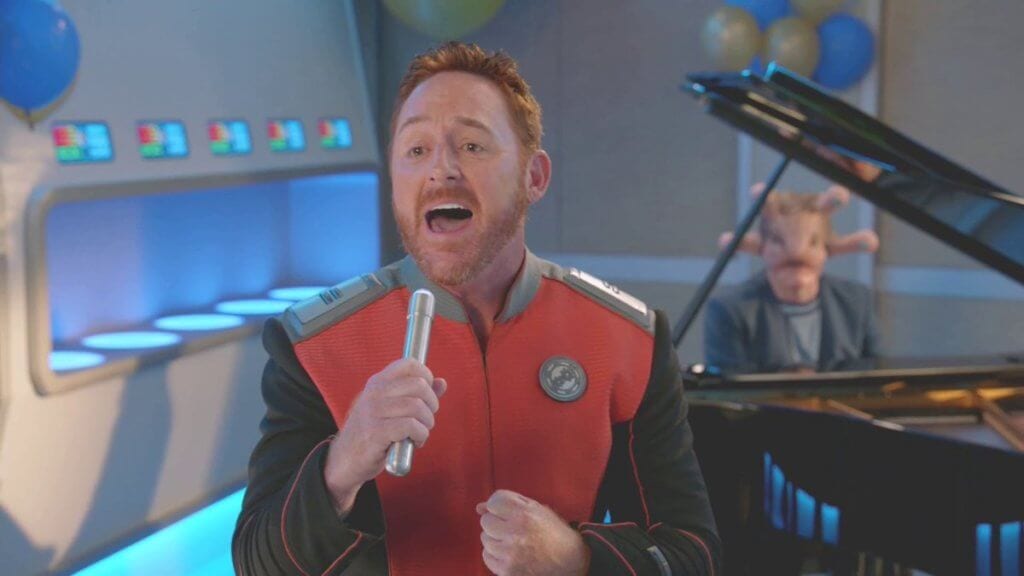 Next, a fan challenged Grimes, Lee, and Macon to karaoke. (“Macon, it’s on like Donkey Kong.”) Lee claimed he knows every single song ever written. Asked if they’d play a practical joke on Seth, they said they had him taped up in the closet of a hotel. Jerald then threw a guy some candy because he said he loves her; Jackson added that the guy would have to fight him for her. Someone asked Jerald what it was like to be inside Yaphet; she replied that Seth told her, “Penny, more tongue!” She said she wanted it to be sexy without being vulgar, and that she made a figure 8 with her body, and advised ladies to do that when they want to fake it. The final question was whether the cast would bring their family on an Orville-like ship? Macon said, “Hell no,” but Jerald said her husband would be the first one to buy a ticket.

And that was all she wrote. The Orville NYCC panel was a lot of fun, with plenty of laughs – a tone befitting this wonderful show. Thanks to everyone who appeared for giving us all a great time (and Seth MacFarlane, we really do understand), and here’s to a spectacular third season on Hulu!