Things That Baffle Me in Gran Turismo 7

A stunning racing game with some truly bizarre quirks 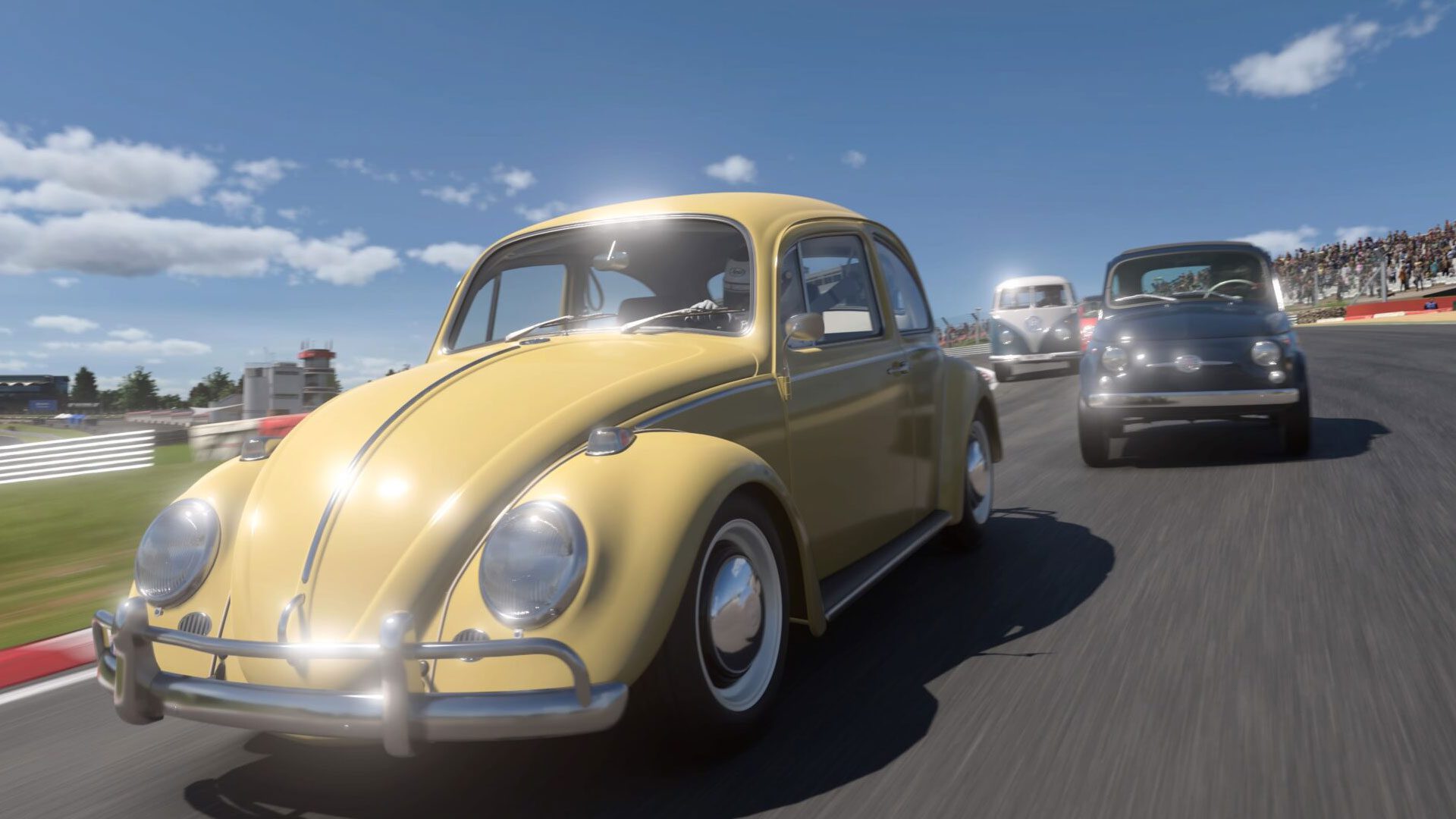 Gran Turismo 7 has finally been released on PS5 and PS4, and it’s a very competent racing sim-cade with deep driving mechanics and a seriously awesome physics engine. I’m really enjoying the driving feel of all the cars in this one, but I also haven’t been this dumbfounded with a game in a while. I’m poking fun at it in love, so apologies in advance for the snarky tone throughout this list. I’m enjoying my time with Gran Turismo 7 so much so that it’s taken me away from Elden Ring on occasion. If that’s not high praise for a game, I don’t know what is.

Yep, in the very back, no matter how handicapped you are to everyone else. This is especially ridiculous in the races with only 2 or 3 laps. Requiring the player to overtake 15 cars – potentially faster cars – in a mere 2 laps on an already small track is baffling. I’m scratching my head wondering why they don’t line up vehicles according to their respective PP ratings. Just put the highest-rated car in the back and give the weakest car a chance in the front of the lineup. But no, screw you; in the back of the line! This kind of treatment would be fine in certain challenge races, but it being the standard throughout the whole campaign is just mean.

That’s right; there are still no real damage models for the cars in GT despite its pride as “the real driving simulator.” Okay, I’ll admit, I don’t care about a lack of aesthetic damage on cars in these sim racers. As long as there’s mechanical damage reflected in the tires, engine, etc., I don’t really care if the car doesn’t look crumpled after a crash. But seriously, your car gets light surface scratches after careening head-on into a wall going 200 MPH. That’s simultaneously hilarious and weird. Check out me ramming my Camaro going 150 mph on Suzuka.

At least there’s some engine smoke and little surface dents, but the other side is untouched, pristine. Couldn’t they at least render a preset damage model? Or would the hyper-customized decals and liveries on cars be too complex to render separate crash models? I don’t know. I can’t really blame them, though; it is heartbreaking seeing a pristine Lamborghini Murcielago get absolutely totaled and destroyed after a crash, at least when it’s yours. This is one decision I don’t mind, personally; it’s still hilarious, though.

The much-anticipated return of the classic single-player GT campaign returns for the first time in a decade, and it’s fine – better than GT Sport’s single-player update in 2017, but only marginally so. Collecting cars is the main incentive for the “story,” which is cool, but there’s no emphasis on winning races and feeling like you’re an up-and-coming race car driver. This is a design decision that’s not inherently bad or anything. Heck, I play the GT games to try out different cars, more so than to be an expert e-sports driver or 100-percenting the campaign. But some folks will undoubtedly be a bit underwhelmed with this direction of the single-player campaign. And then there’s the lack of endurance races in missions, licenses, or the campaign, which I am disappointed by. Endurance races are only really available in custom races, which is baffling because the strategy involved in managing gas and tire wear through well-timed pit stops is very fun, especially so with the amazing physics in GT7. There’s so much potential for endurance races in single-player and multiplayer, and they even discourage them from custom races with the poor payouts for doing so, which leads to the next entry on this list.

There are no particularly rewarding bonuses for turning all assists off or doing impossibly difficult endurance races. I legitimately hope this gets patched. Not only do the general low payouts strongly incentivize microtransactions, which this game has in the form of obtaining credits, but it heavily discourages custom endurance and challenge races. Part of the fun of previous GT games was the ability to create a 24-hour endurance race while having no assists and with the most difficult settings imaginable, receiving over 1 million or so credits as a well-earned reward. In GT7, the most I’ve seen is 90k credits for getting 1st on a 24-hour endurance race, no assists, and against professional opponents. See the example I just tested below.

There are a couple of grind exploits to earn quick cash, but they still take around 10 minutes or so to complete and are super repetitive and not very interesting to do. At least make earning credits fun. Give us the best car and some great payouts after doing a 24 endurance race! By the by, I still wouldn’t do a 24 endurance race no matter how many credits they give me, but there are insane players out there who will.

A lot of the menu music is quite good and groovy, except perhaps the super repetitive garage playlist that rotates the same cheaply arranged classical tracks every 10 minutes. I play piano and love classical, and even I am getting sick of hearing the same Claire de Lune arrangement over and over again. Since the garage is a place most players will spend a lot of time checking out their cars, I can only assume they’d like to adjust the playlist by, say, placing some of the jazz tracks in the garage and removing any repetitive tracks that you’re tired of. You can freely remove tracks from the race playlist, so why not menus?

The menus with that giant cursor

I still haven’t quite figured out the reason for the cursor layout in a console exclusive game. Cursors are meant to be controlled by a mouse, not with duel thumbsticks and a control pad. It works fine in terms of navigation, but it feels like you’re playing an MMO port on console. This is made worse by the fact that you have to spend an inordinate amount of time navigating menus if you do custom races a lot. There’s no way to save custom race settings, which means if you want to do different race options, you have to navigate through over 10 or so parameters with a menu that reminds you of its bizarre cursor layout in every single custom race. If you could save race settings the same way you could save vehicle tunes, this would save hundreds of extra clicks and rote menu navigating.

Yes, the cockpit view is highly visceral and detailed in Gran Turismo 7, easily the best I’ve seen in a game. And yes, the vehicles look gorgeous on the exterior; they pride themselves on that too. So, why, then, is there no way to rotate the camera around the car 360 degrees like every other game? You can only race with the camera directly behind the car, like so:

…or ahead of the car looking at it in the rear-view.

No side cameras are available at all when racing in 3rd person and it’s been this way since at least GT Sport. I know they want to discourage having a full 360 perspective to make online races more “fair” and realistic. But why is the camera locked strictly in back or front in every single-player race mode too?

The game prides itself on its car list of over 400, yet a vast majority of players won’t even be able to obtain a fraction of that because of the exorbitant prices and exclusivity of the legendary cars. Some cars like the Carrera GT are invitation-only, meaning they have a random chance to appear in the shop. In fact, I got an invitation to buy an exclusive Carrera GT, and I only have until the end of this month to grind the credits for it.

I’m fortunate that the Carrera GT is among my all-time favorite cars and that this was the first and only invitation among the dozens of other hyper-cars that could’ve been. Who knows which car will appear when and how often certain cars get rotated. It could be months, or even a full YEAR before that Porsche is available again, so I might as well grind that 2.3 million credits now. Again, the subtle push to get players to get the credits via microtransactions is felt here. It’s not in-your-face, but the exclusive rotation of rare cars is just one more encouragement for whales to pay real money to get these expensive cars.

Music rally being the only other feature from the main menu, besides the core game

Look, I’m a musical guy. I’ve played piano for a decade and listen to classical music every day, and even I think the emphasis put on this music mini-game is odd. When you first boot up the game, you’re treated to the first stage of music rally. I loved it because they put me in a vintage Porsche to classical music; it’s a win-win for me, not gonna lie. It’s rather funny that the mini-game is the only other feature on the main menu besides, you know, the whole rest of the game.

Why not just put the music mode as one of the pavilions in the main GT mode?? Eh, whatever, we love you for your charm and quirks, Polyphony Digital.

How darn fun and addictive the game is despite everything else

Gran Turismo 7 is probably my favorite racing game yet in terms of pure driving. For me, this game is worth its price of entry for the driving alone, even if it had no modes or campaign structure. The car physics and mechanics are just that frickin’ good.

Check back soon for a full Gran Turismo 7 review on Geeks + Gamers, and thanks for dealing with my whining and ranting.

Besides Music Rally, Forza doesn’t have the problems you mentioned and passed GT a long time ago. I respect GT for what it was and what it helped inspire. I definitely don’t think it’s a bad game, and favorites are favorites. From my pov, saying GT is the favorite sounds bought or from the pov of sheltered experience