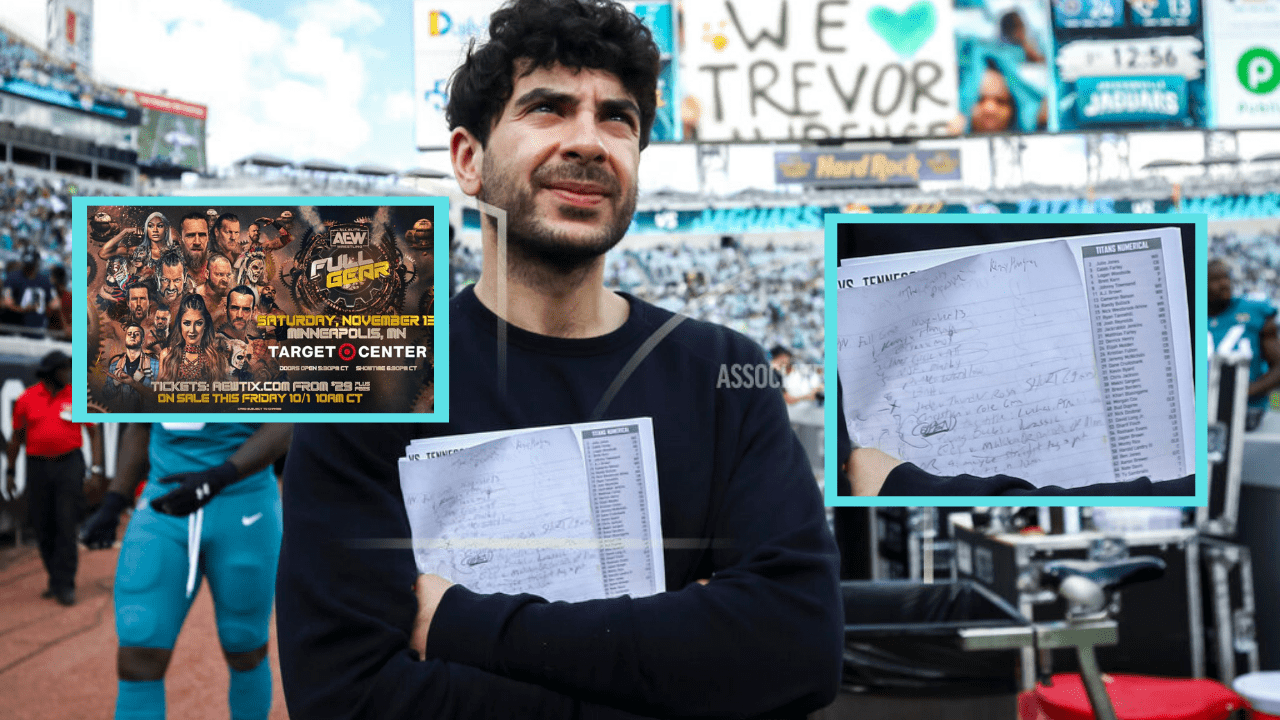 As if there couldn’t be more scandal coming from the Jacksonville Jaguars’ sidelines. Co-owner of the team and head booker of AEW Tony Khan may have just leaked nearly the entire match card for the upcoming Full Gear Pay-Per-View on November 13th at the Target Center in Minneapolis, Minnesota.

A picture snapped during the Week 5 loss to the Tennessee Titans caught a legible match listing that appears to coincide with the culmination of the active angles in the promotion at the moment. Below is an enhanced image of the notebook. 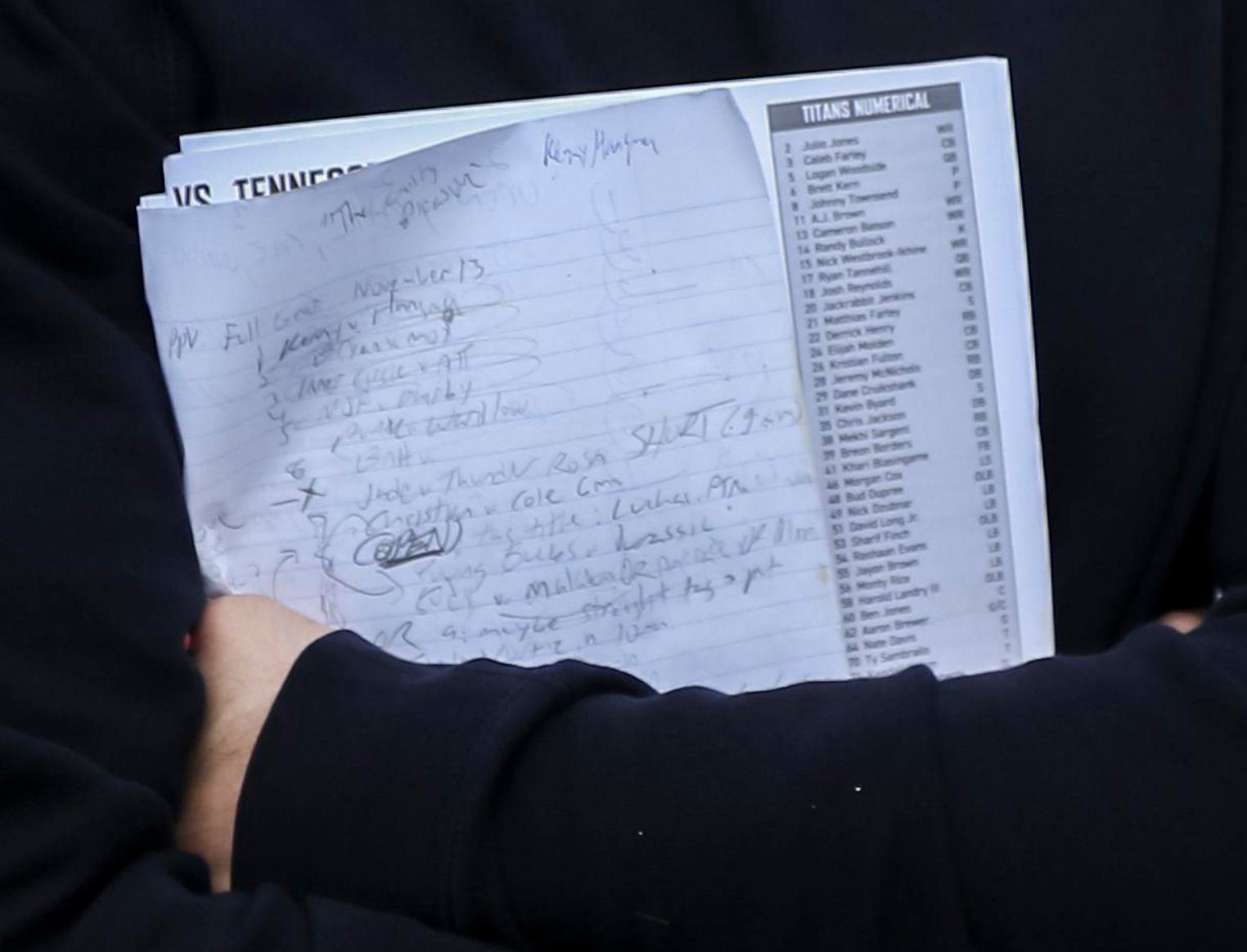 Most of it is decipherable enough, so here’s a rundown of what’s currently on tap:

While no finishes are indicated, we can surmise why and for what reason each match is taking place. So, let’s fantasy book for a minute, shall we?

Obviously, Omega/Page is for the AEW World Championship; that much is obvious, and also confirmed by the boss. The Hangman just returned this past week on Dynamite to win the Casino Battle Royale and an opportunity at the title. Before Page requested time off in August, the presumed main event for AEW’s previous Pay-Per-View was to be this match-up. Likely, it will be a title change, as there is a ton of history, even before AEW’s formation, between the two. The only question will be whether Page becomes the second man ever to kick out of the One-Winged Angel. Also, it’s a bit poetic that the last time these two faced off head-to-head was at last year’s Full Gear in the culmination of the World Title Eliminator Tournament. Just a happy accident.

The #AEW World Title Eliminator Tournament returns with the finals taking place at #AEWFullGear! The full bracket will be announced THIS SATURDAY on #AEWDynamite at 8/7c LIVE on TNT. Who do you want to see in this year’s tournament field? pic.twitter.com/lHgyEB4wnM

Ahead of this Saturday’s Dynamite and the announcement of the bracket for the World Title Eliminator Tournament, the match-up of Moxley and Danielson is likely the finals of this tournament. While they have faced off before in the WWE, this will be the first time – September 26th, 2010 – the world has seen the “American Dragon” vs. the current GCW Heavyweight Champion.

Previously discussed on the site is the budding feud between Chris Jericho’s faction, the Inner Circle, and American Top Team. This MMA fight camp is making its way into the professional wrestling sphere. On this Friday’s Rampage, there is a big 6-man tag team match between Jericho, TNT champion Sammy Guevara ,and Jake Hager of the Inner Circle vs. Scorpio Sky, Ethan Page (Men of the Year, the AEW team affiliated with ATT), and the pro wrestling debut of former UFC heavyweight champion Junior Dos Santos. In the corner of ATT and Men of the Year will be Dan Lambert, head coach of ATT and the UFC’s BMF (Bad Motherfucker) champion, Jorge Masvidal. Likely that the match at Full Gear will be a 5 on 5 affair, with the aforementioned members of the Inner Circle, plus the addition of Proud & Powerful (Santana & Ortiz) vs. the three men for the ATT side, plus another former UFC heavyweight champion, who has been seen with this crew before in Andrei Arlovski and Jorge Masvidal. This match will have considerable mainstream appeal. It should be good as well.

A gang assault on @DarbyAllin and it's quite obviously the handy work of @The_MJF and #ThePinnacle – Tune in to @tntdrama NOW for the #AEWDynamite 2 Year Anniversary Show LIVE! pic.twitter.com/cyJS7Pdy3E

Darby Allin has recently entered a feud with MJF and his group, “The Pinnacle,” so this makes sense. But the CM Punk/Wardlow (he’s MJF’s heavy in the group) is interesting. CM Punk has been floating around since his return match against Allin at All Out, so after the beating Allin took on last week’s Dynamite, perhaps Allin gets some help fending off the Pinnacle from Punk?

The TBS Championship is coming to the #AEW women's division when #AEWDynamite moves to @TBSNetwork starting January 5!

Tune in to @tntdrama NOW for the #AEWDynamite 2 Year Anniversary Show LIVE! pic.twitter.com/RDe3N988th

The recently announced TBS Championship for the women was accompanied by the announcement that the first champion would be crowned as a result of a tournament; AEW loves tournaments, if you can’t tell. So, this leaps off the page as being the culmination of that tournament as well. The bracket is still TBA, so if Thunder Rosa and Jade are on opposite sides, that would be the logical conclusion. Either are good choices, as they are two of the best booked and most protected women on the roster.

The next two matches also make a ton of sense, as many of the matches between the Superkliq have involved a different variation on the Young Bucks, Adam Cole, the Jurassic Express, and Christian Cage.

Cody missed out on the biggest card in the company’s history, so it was expected he would get a match on the follow-up. All three pose an interesting challenge. There’s a story there with Malakai, but he’s been beaten by Cody twice, so that would be a touch overkill. The other two options would yield great matches, but here’s the thing: Cody’s taken a couple of losses recently, and there’s a breeze in the air that smells faintly of a heel turn, so in the build to whatever match happens, just note that development. None of the guy’s opposite of Cody on that list should be losing to Cody, so something is in the works we are unaware of at the moment.

Lucha Brothers and FTR; while there is no build to this at the moment other than FTR cutting a promo saying that they are refocused now, this match is going to be tremendous. Two of the best teams in the world in a company that values tag teams; it’s a dream match that is a month away from being a reality.

Britt Baker, the AEW Women’s World Champion, is one of the most over wrestlers on the roster. Her chants are over, her pops are massive, and she’s a heel to boot! It’s tough to see her dropping the title against anyone right now, with reports that Thunder Rosa is supposed to take the strap off her in the New Year at some point. Whoever fills this spot will be getting a rub, but ultimately looking at the lights. Purely a guess: Serena Deeb.  She just won over former champion Hikaru Shida, stopping her from getting her 50th career win in AEW; that makes some sense.

These leaked match-ups make sense, so it seems logical enough that that would be the card. All of that is just my justification for what is written down and what to expect. Closer to the date, as these matches get confirmed, we could revisit this and see how the card will actually play out!