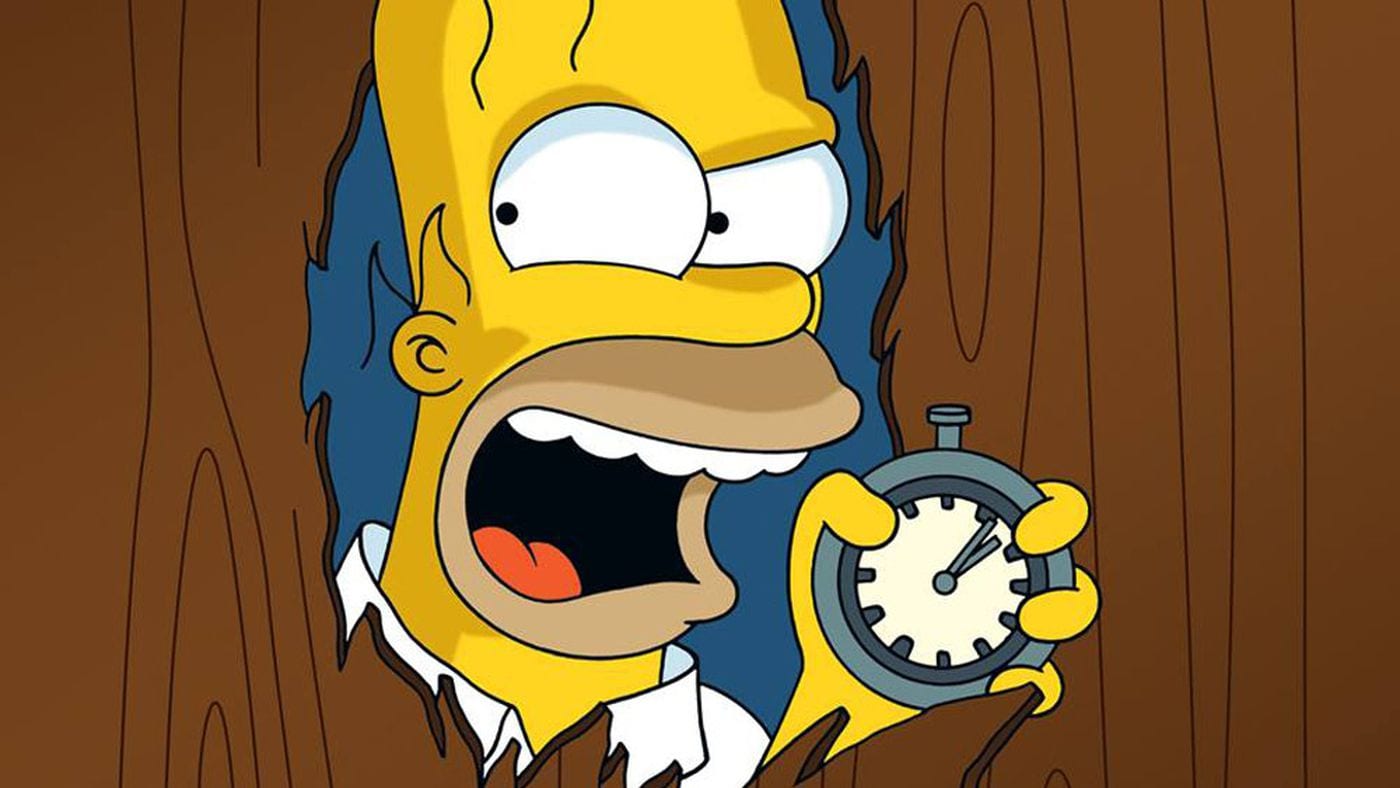 While The Simpsons is a faint shadow of its former self these days (and has been for quite some time), the show’s heyday manages to transcend its disappointing legacy, shining as an indelible part of American pop culture and still entertaining while the animated sitcom has long passed its sell-by date. The Simpsons bequeathed us many joys, and one of the most beloved is the Treehouse of Horror. Beginning with the second season, the series aired a special Halloween episode every year, each made of three segments that were divorced from continuity, spooky tales that were often parodies of scary movies or television, to entertain and have some fun around All Hallows’ Eve. Sadly, like the rest of The Simpsons, the Treehouse of Horror episodes lost their luster long ago, but the classics are still Halloween staples. Choosing my favorites episode by episode would be nigh impossible, as some stories in each are better than others. So, to celebrate Halloween this year, here are my top 10 Treehouse of Horror segments in chronological order.

“Hungry are the Damned” – “Treehouse of Horror” 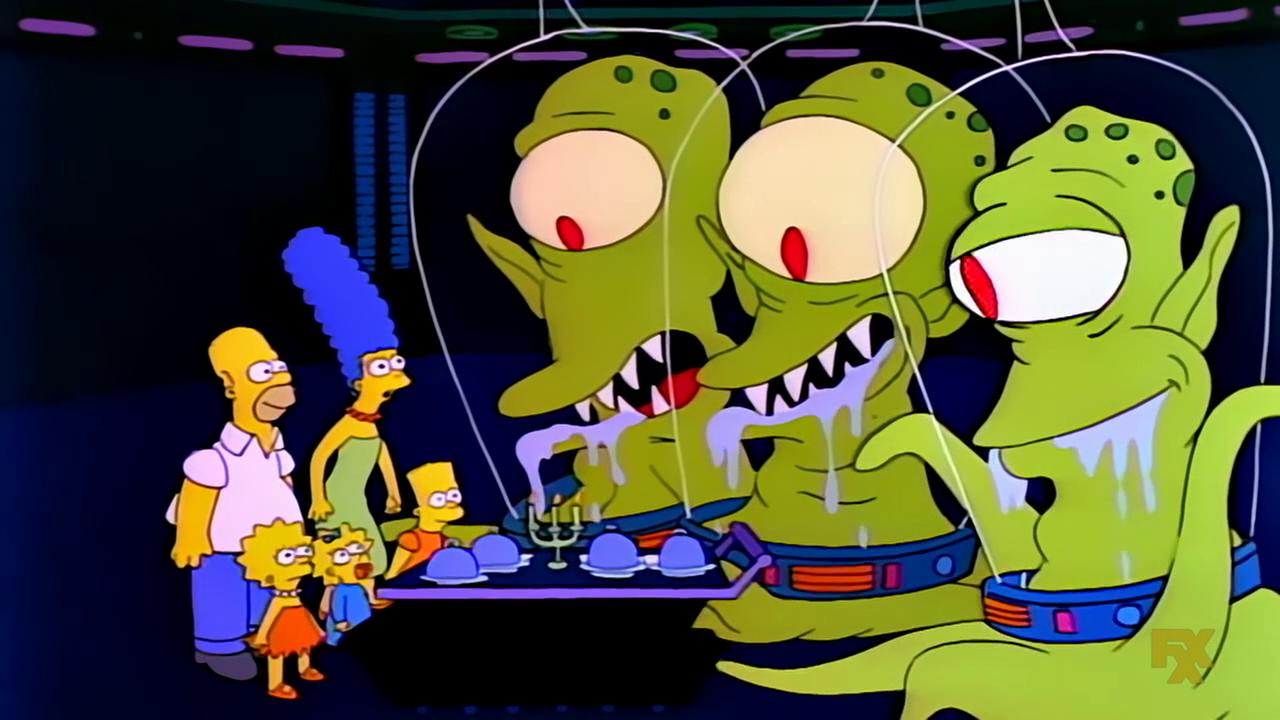 “Well, if you wanted to make Serak the Preparer cry, mission accomplished!”

The Simpsons are abducted by Kang and Kodos, the aliens who make appearances in every Treehouse of Horrors, to varying degrees. The Simpsons are treated to feast after sumptuous feast on their way to a faraway planet, but Lisa suspects the aliens’ motives and, after investigating, makes a horrifying discovery… or does she? A parody of the old Twilight Zone episode “To Serve Man,” “Hungry are the Damned” laments the paranoia of man and how it impedes progress, but doesn’t get preachy about it. Having Lisa be the one to distrust the aliens makes the point better than having Homer do it; we’re all to blame, not just the dumbest of us. Along the way, there are plenty of laughs, from the necessity of two tractor beams to lift Homer to Kang and Kodos’ fascination with Pong. 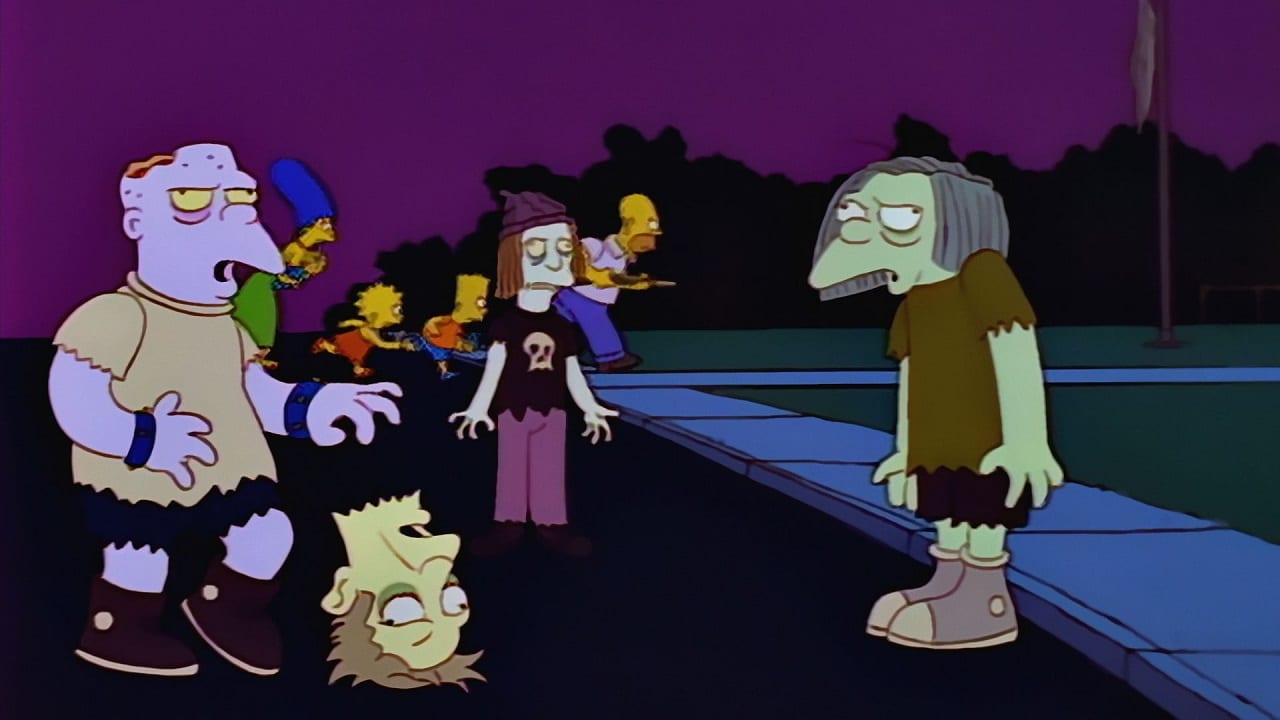 “To the book depository!”

While perusing the occult book section of the school library, Bart comes across the Book of Magic and Spells (volume 2). When he and Lisa use it to bring their dead car back from the dead, they accidentally unleash an army of zombies on Springfield. Soon, it’s up to the Simpsons to save what’s left of their town. This is one of the funniest Treehouse of Horror segments ever, with plenty of historical figures rising from their graves to menace Springfield. There are some great gags along the way too, like the zombies passing Homer by when they realize he has no brain for them to eat, and Homer’s reaction to having killed a living dead Ned Flanders (“He was a zombie?”).

“The Devil and Homer Simpson” – “Treehouse of Horror IV” 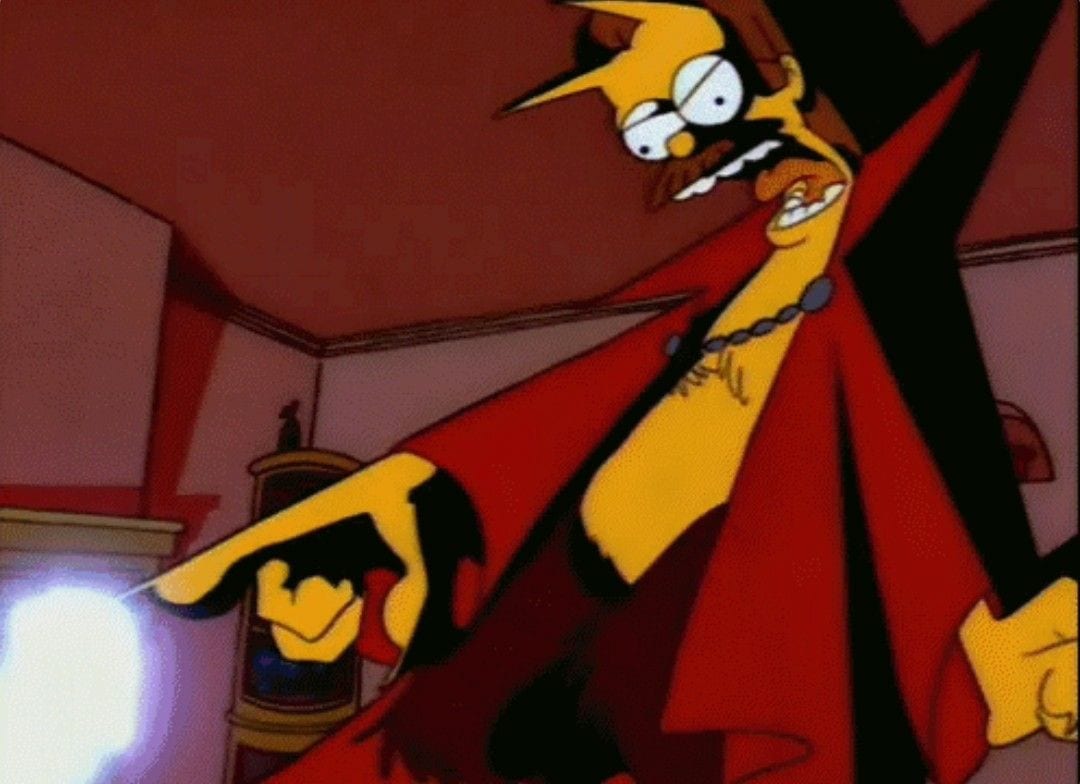 Homer, in typical Homer fashion, sells his soul for a doughnut, and his attempt to outsmart the Devil ends about as well you’d expect a duel of wits between Homer Simpson and an eternal being to end. But when Lisa insists on a trial, the true battle for Homer’s soul begins. The image of Ned Flanders as the Devil would be enough to consider this classic Simpsons on its own, but every aspect of “The Devil and Homer Simpson” is perfect. Hell’s attempt at giving Homer an ironic punishment goes hysterically wrong, Lionel Hutz bungles Homer’s courtroom defense as only he can, and the way by which Homer’s soul is saved is heartfelt in the greatest Simpsons tradition. Satan’s final vengeance is also great, as is Homer’s reaction to it. 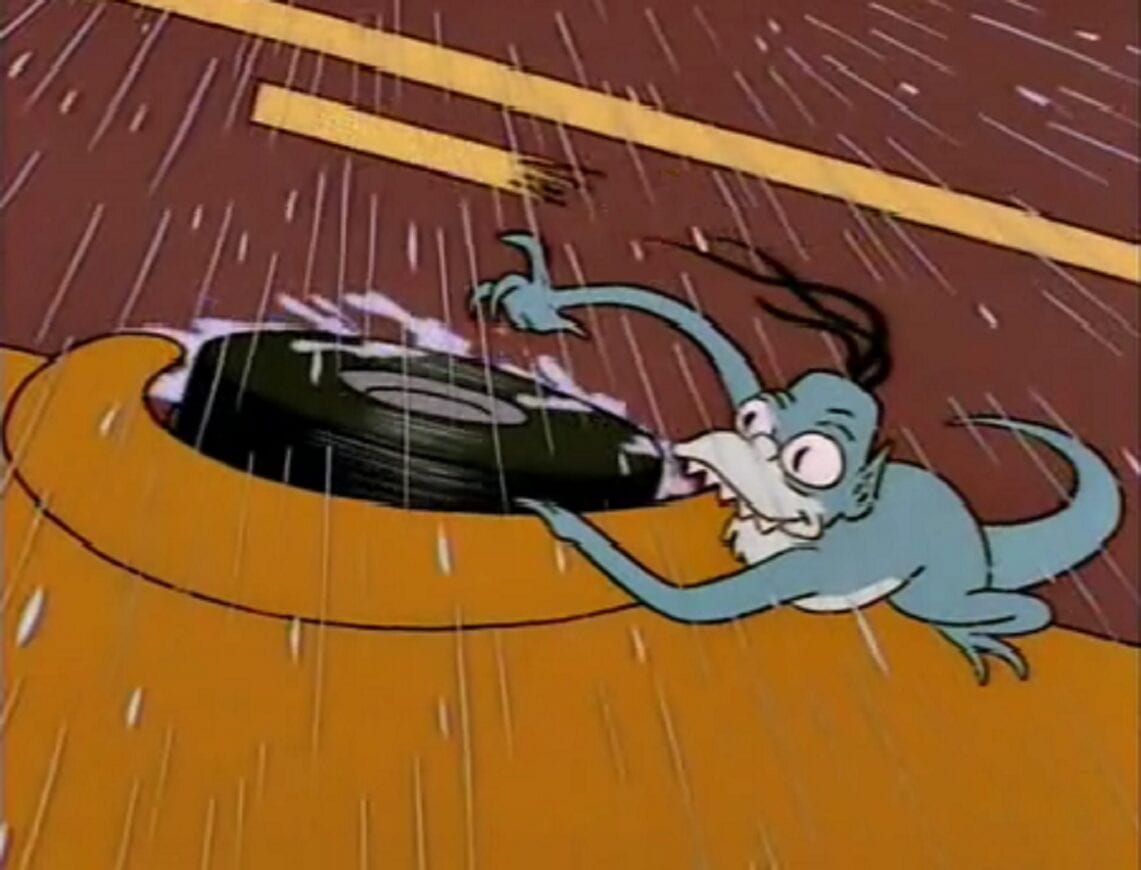 “Now, I’ve gotten word that a child is using his imagination, and I’ve come to put a stop to it.”

The Simpsons takes on perhaps the most famous Twilight Zone episode, with Bart in William Shatner’s position, seeing a gremlin taking apart the school bus on its way to Springfield Elementary. No one else sees it, of course, and everyone thinks he’s crazy, so Bart has to stop the monster and save his classmates – along with Principal Skinner and Groundskeeper Willie. The gremlin’s destructive tinkering makes for some surprisingly thrilling moments, and Bart’s growing desperation is palpable. Of course, it’s also very funny, with Bart’s show of kinship with Uter a standout laugh, as well as the running gag of Homer’s blowhorn. 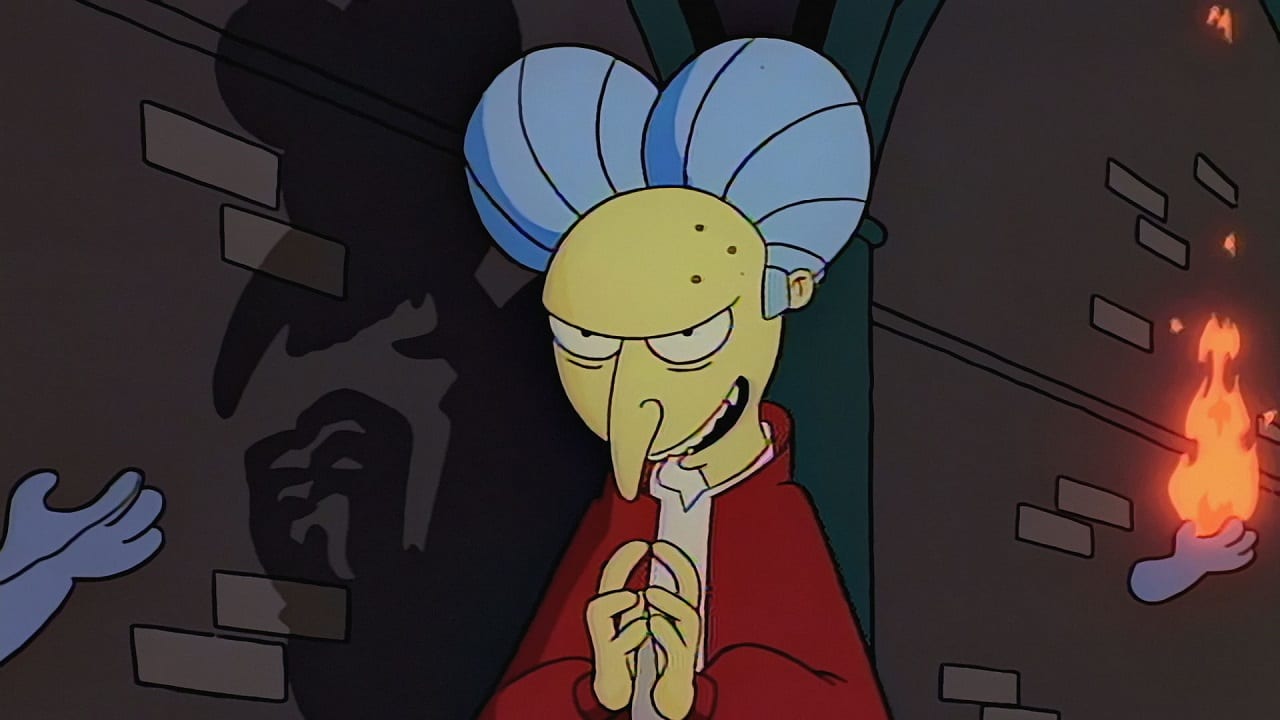 “Lisa, vampires are make-believe, just like elves, gremlins, and Eskimos.”

Yep, all three segments of “Treehouse of Horror IV,” which is the most consistently excellent of the Simpsons’ Halloween tradition, are on the list. As a rash of vampiric killings hits Springfield, Mr. Burns invites the Simpsons over for dinner, leaving clues only Homer could ignore that he wants to drink their blood. Soon, Bart is turned, and Lisa has to convince her family that Mr. Burns needs to be destroyed. The imagery in this one is fantastic, particularly Mr. Burns’ spooky castle and the ghoulish skin tone of the vampires. (Burns’ hair is fashioned after the ridiculous ‘do worn by Gary Oldman in Bram Stoker’s Dracula, as was obligatory at the time.) The jokes hit the mark every time; Homer’s incidents of obliviousness to Burns’ monstrous nature are hysterical and all in character, as is his first unsuccessful attempt to kill the vampire.

“The Shinning” – “Treehouse of Horror V” 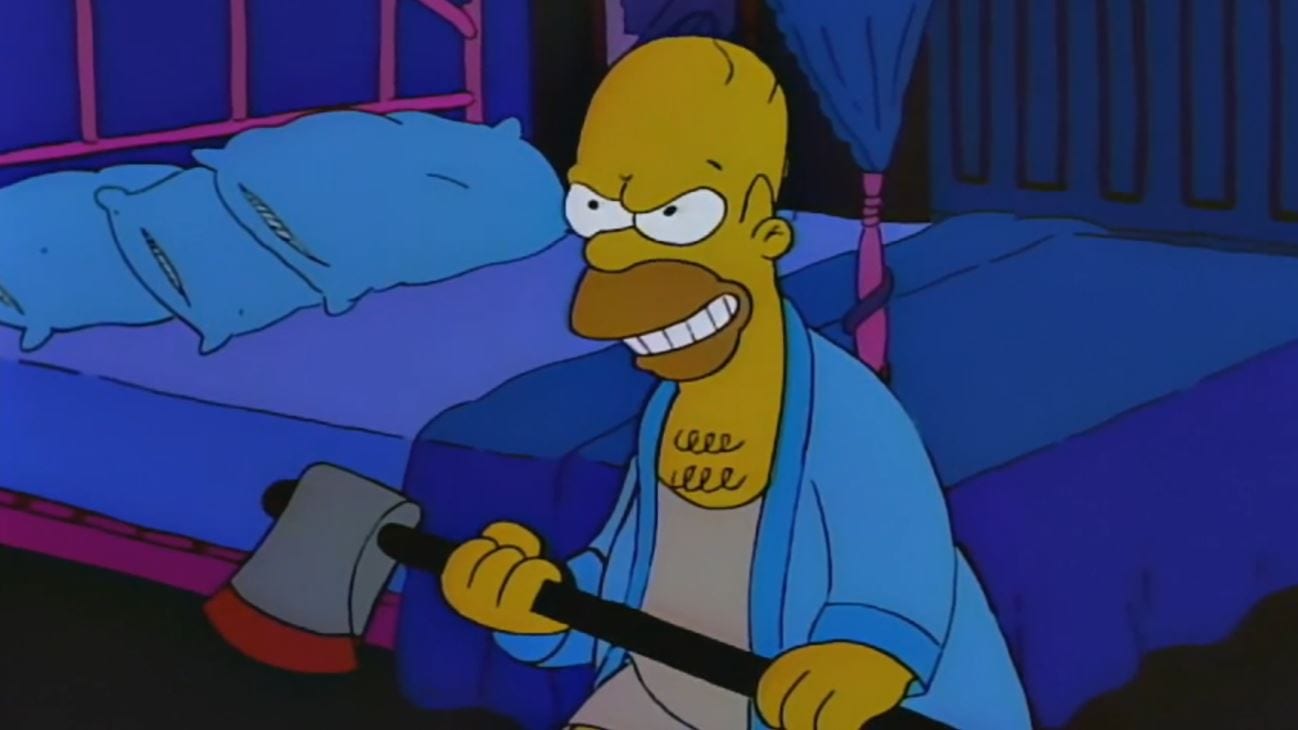 No points for guessing which horror classic this one parodies. The Simpsons are offered an opportunity to act as caretakers for an isolated hotel owned by Mr. Burns, but the lack of TV and beer – along with the ghosts haunting the estate – start to drive Homer to murderous madness. Fortunately, Bart has a psychic gift called the… Shinning (lest anyone get sued) that could prove to be their salvation. This segment gets a lot of mileage out of poking fun at many classic scenes and elements from The Shining, both the movie and the book, but they all work. It also features the first instance of a running joke throughout the three segments of this episode, where Willie shows up to save the day, only to be killed with an axe; they’re all funny, but this is the one that’s a direct reference. 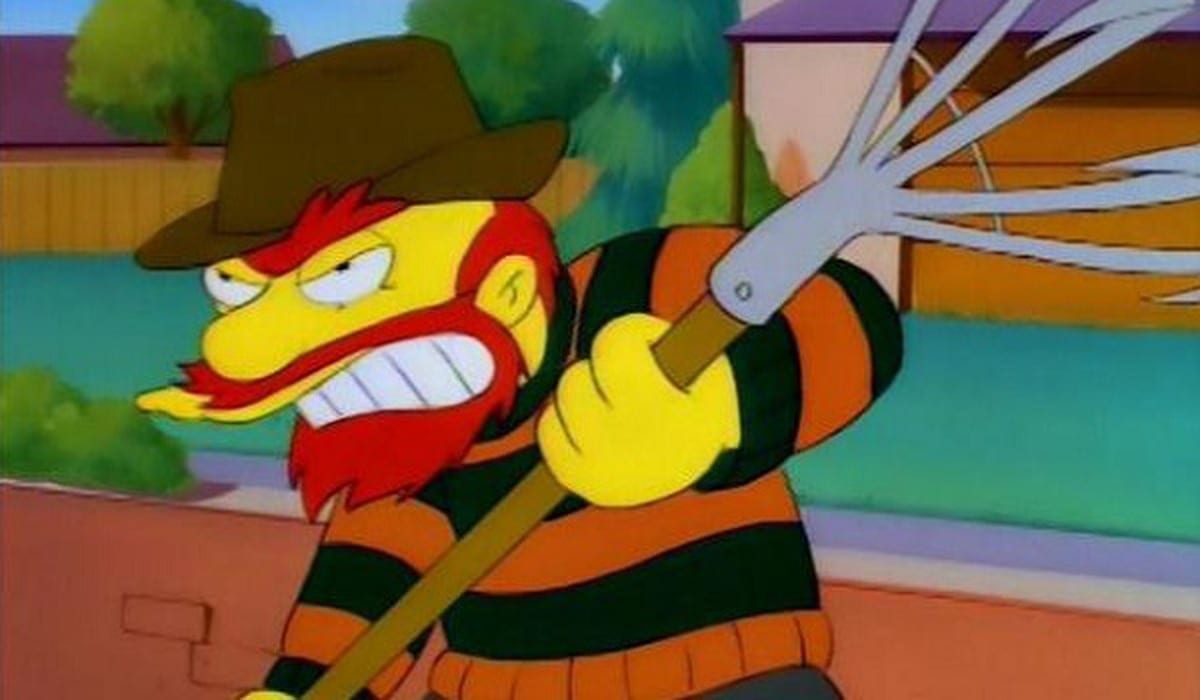 “Do not touch Willie. Good advice.”

In a riff on A Nightmare on Elm Street, Groundskeeper Willie burns to death during a PTA meeting at Springfield Elementary and vows with his last breath to kill the parents’ children in their dreams. One by one, Willie hunts the kids down like a Scottish Freddy Krueger until Bart decides to take him on in the dream world. Like a slasher movie, the kills are fun and inventive, as are the many wacky forms Willie assumes in his dreamscape rampage. Homer’s idiotic misreading of the thermostat warning comically brings about Willie’s death and subsequent vengeance, and the kids’ unlikely savior makes for a great ending. 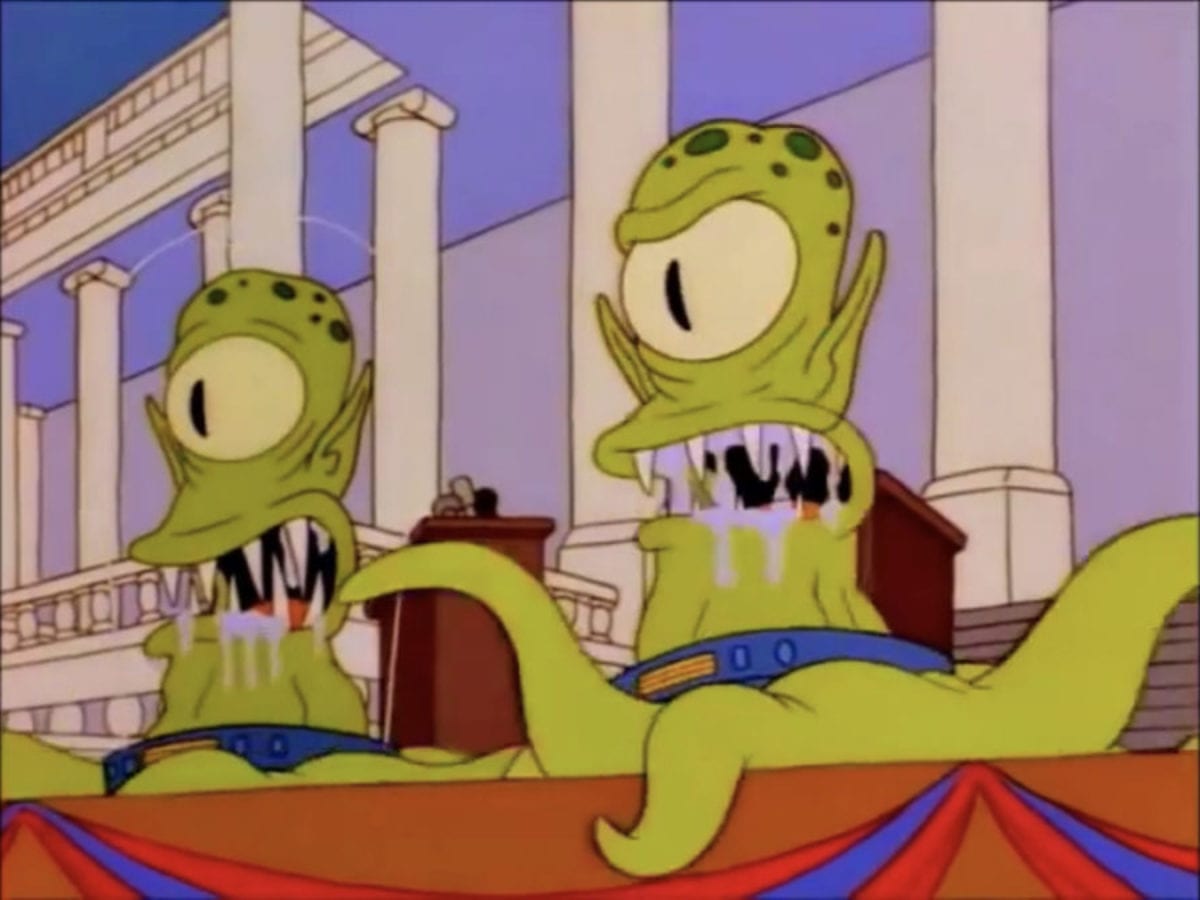 This is the best of Kang and Kodos’ appearances. The alien duo land on Earth and replace Bill Clinton and Bob Dole during the 1996 Presidential election. Only Homer knows the truth, but nobody believes him because he’s Homer Simpson. The obvious commentary about both American political parties being as bad as each other and the folly of the two-party system is handled well, with the potshots taken not at Republicans or Democrats specifically, but at the silly trappings of politics in general. (Remember when they used to do this?) Empty campaign slogans, the difficulty in pleasing both sides of the divide, and the futility of voting for a third party are mined for big laughs, as are Homer’s failed attempts to save the world. 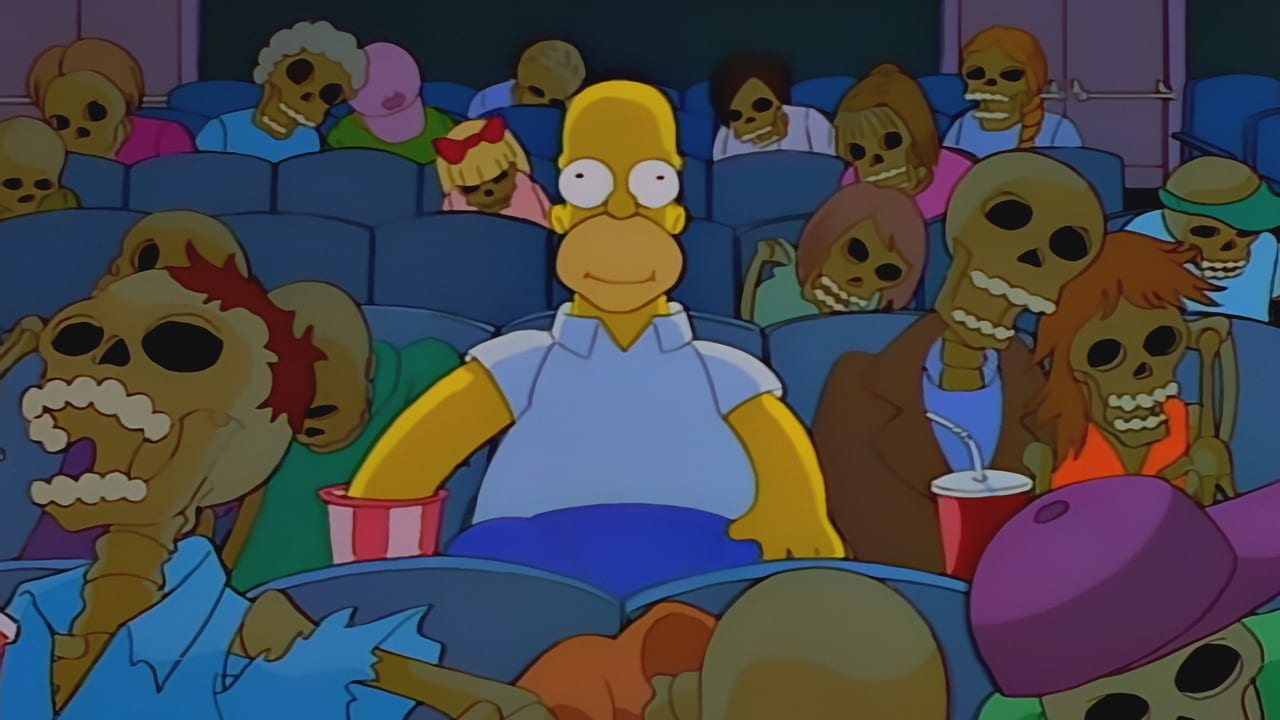 “In the midst of all the killing and skin-eating, we forgot the love.”

After Springfield is destroyed by a neutron bomb (at the hands of the French!), Homer is the lone survivor and makes his way through a desolate world. Of course, Homer’s way of doing that is dancing around naked and watching movies in a theater littered with dead bodies. But when he learns that some of his friends are still around, he finds himself running from murderous mutants. Inspired by The Omega Man/I Am Legend, “The HΩmega Man” pokes fun at the tropes of post-apocalyptic fiction, like the realization that one can do whatever he wants, the mutated humans who become bloodthirsty for no discernable reason, and even the notion that man may be the true monster. Extra points for the Tommy Boy reference.

“I Know What You Diddily-Iddily-Did” – “Treehouse of Horror X” 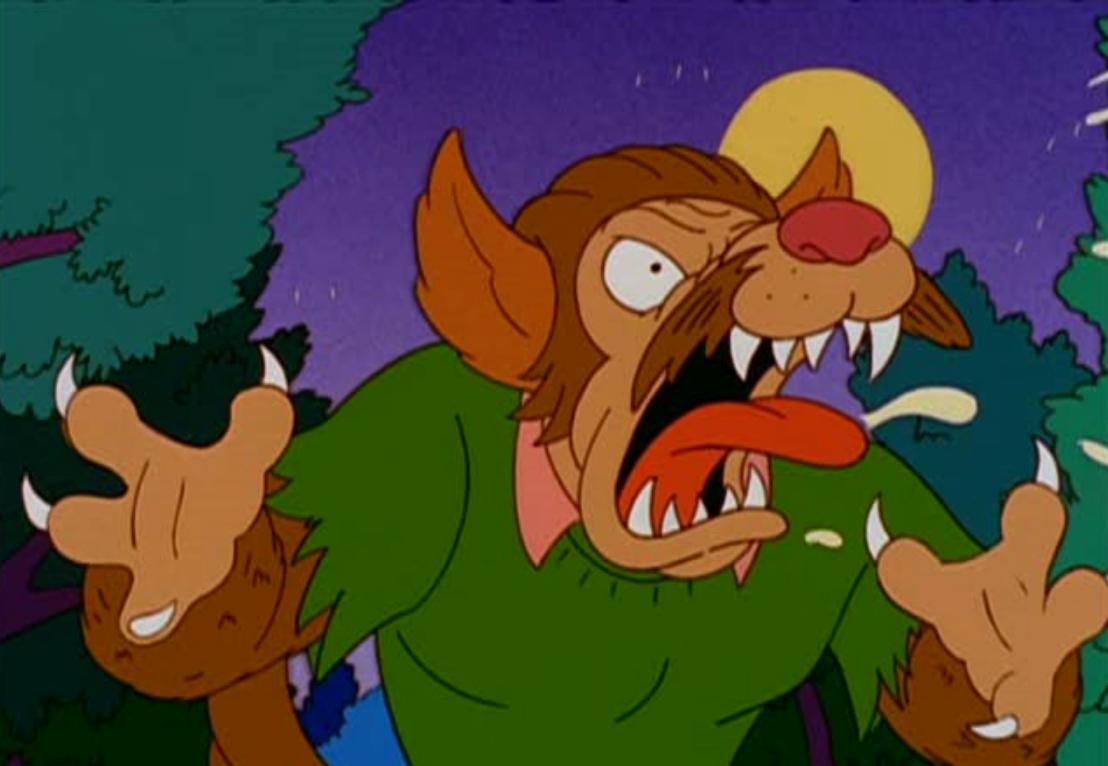 “Hi, Maude! Diddly! I’ve been having fun with my pal Homer! Diddly!”

While driving home in a thick fog, the Simpsons accidentally run over Ned Flanders and cover up their role in his death. But a series of bloody notes indicate that someone knows what really happened. The many digs at Ned’s fuddy-duddy vernacular, Homer’s ridiculously incriminating eulogy (“We’re still looking for the real killer”), the horror-trope potential hiding places, and Homer constantly poking Ned in the eye with a stick make this take-off of I Know What You Did Last Summer a winner. The true reason for Ned’s survival is the icing on the cake, a nod to how these movies almost always absolve the main characters of the misdeed that triggers their ordeal.

What are your favorite Treehouse of Horror segments? Do you still watch The Simpsons? How many of these will Disney+ censor in the coming years? Let us know in the comments, and Happy Halloween from Geeks + Gamers!