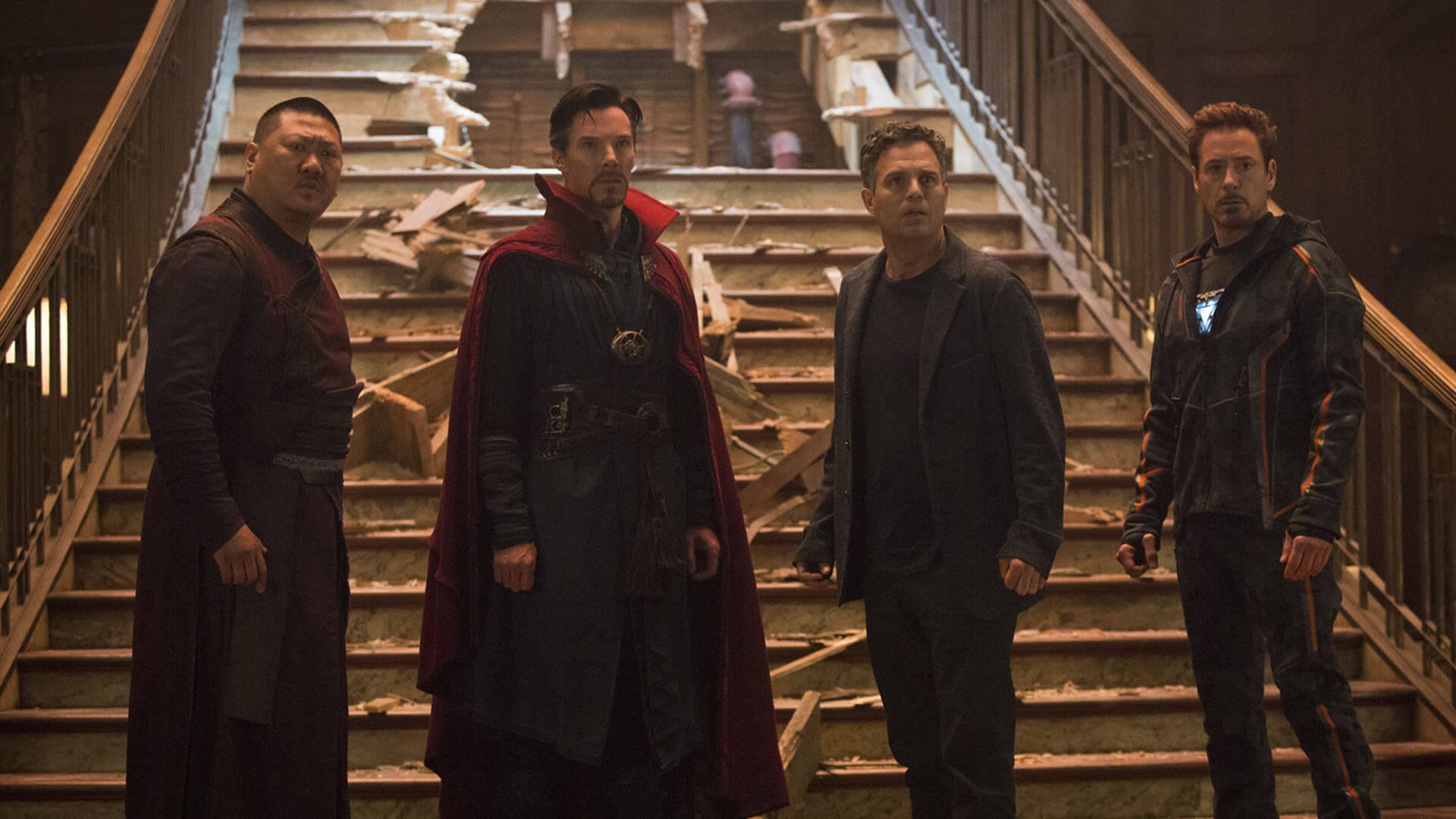 Geeks + Gamers is once again spreading its wings. As with Doctor Strange, I appeared on the Fresh Geek Context podcast to discuss Avengers: Infinity War (among other topics) with hosts Jace and Josh. It’s a great show that talks about all sorts of fun, geeky subjects, and you should consider listening and subscribing here or on iTunes.

While we have a great talk on the podcast, a movie like Infinity War is fodder for much more discussion than any one conversation can cover, so in addition to our review and spoiler roundtable, expect some more examinations of the monumental Marvel movie event. Getting started, one of the most fun aspects of the Marvel Cinematic Universe has been looking for Easter eggs and references to the Marvel Comics stories that inspired the movies, and their newest film has plenty of them. So these are my top five comic book callbacks in Avengers: Infinity War.

Marvel unveiled the Iron Spider armor at the end of Spider-Man: Homecoming and featured it fairly prominently in the Infinity War promotional material, and it was… underwhelming. It was fine, but nowhere near as cool as the original comic book version seen in Civil War. Specifically, where were the arachnid-like legs jutting out of Tony Stark’s gift for Peter? It looked like it was just a slightly souped-up version of the regular Spidey suit, which was disappointing. But when Spidey and Tony take on Ebony Maw, just as Peter is about to be sucked into space like in another old movie he saw, the spider legs come out and the hearts of every comics fan in the audience soar.

Just seeing the legs would’ve been great, but Infinity War goes the extra mile and makes them functional. Spider-Man uses them to save himself on the space ship, then in battle against Thanos. They aren’t just a shout-out to the fans, but a real plot element, and that makes their inclusion all the better. Even the presence of the Iron Spider armor threatened to lessen one of Homecoming’s major themes – that Spidey needs to be a more pared-down hero to protect the people the Avengers don’t have the time to help between large-scale threats – but this movie side-steps that problem expertly by having Peter explain that a Friendly Neighborhood Spider-Man needs a neighborhood to protect. Marvel Studios don’t pander to their fans; they respect them enough to use their comic references for the betterment of their stories, and the Iron Spider, legs and all, is one example among many.

4. Banner Crashing Into the Sanctum Sanctorum

In The Infinity Gauntlet, the comic book storyline on which much of Infinity War is based, Thanos’ arrival is signaled by a powerful Marvel hero falling through the skylight of Doctor Strange’s Greenwich Village base of operations, the Sanctum Sanctorum, warning the Sorcerer Supreme of the coming darkness. The movie has an almost identical scene where Strange is told of Thanos’ impending quest for the Infinity Gems. In the comics it was the Silver Surfer, wielder of the Power Cosmic and former herald of Galactus, whose fear-stricken portent motivates Doctor Strange into action, which is appropriate; if the Surfer is scared, something really bad is on its way. But Marvel/Disney can’t use this character in a movie (at least until the end of 2019), and they need to get the point across that Thanos is a threat unlike any the Avengers have ever seen.

Fortunately, they have a Hulk. This time it’s Bruce Banner who lands on Doctor Strange’s couch to alert Earth’s Mightiest Heroes that the Mad Titan is coming. This is perfect; the MCU has built up the Hulk as an unstoppable force of nature. In The Avengers, Banner has reached a point where he cannot be threatened anymore thanks to the Hulk’s power, framing his cooperation with Black Widow and the army of SHIELD troops surrounding him as an act of mercy. He regularly trounces gods. In Thor: Ragnarok it’s implied he’s perfectly capable of taking down Surtur, the purveyor of the titular apocalypse, having to actually be called off lest he smash the massive fire demon and ruin Thor’s plan. If this guy is scared, everyone immediately knows to take Thanos seriously. Once more, it’s a comic reference that functions in the plot.

3. The Destruction of Titan

This event is the most different, as in the comics Titan isn’t completely destroyed, though it comes close. Early in his evil career, Thanos – in yet another bid to impress Mistress Death, the personification of the concept of Death with whom Thanos is in love – returns to his home world of Titan with an army of the worst the galaxy has to offer and launches a devastating attack on the moon, slaughtering most of his fellow Titans and conquering the ruins. In the movie, Thanos wasn’t responsible for Titan’s destruction; rather, he did everything he could to stop it and watched, helplessly, as his race suffered the fate brought on by their refusal to heed his words. Again, these are two different depictions of the same event, and both share different insights into their respective version of Thanos.

The comic book version of Titan’s fall showcases how cold and evil Thanos is, as well as highlights his obsession with death, and Mistress Death in particular; so desperate is he to curry her favor that he lays waste to his own home and his own people. But the Thanos of the movie harbors no ill will towards Titan; he wanted to save it. Titan’s fate proves his utilitarian ethos right, acting as a microcosm for what will befall the whole universe if Thanos doesn’t act. It was a defining moment for him in both instances, proving what great evil the comic Thanos is capable of while spurring the movie Thanos to begin his quest for balance and salvation through mass murder.

This is a story thread the possibility of which was introduced in Avengers: Age of Ultron when the two shared  a mid-rescue moment, and continued in Captain America: Civil War, when Vision’s duties to the pro-Accords side of the Avengers divide conflicted with his growing feelings for Wanda. Infinity War pays off all that work; Vision and Scarlet Witch are a couple, sneaking off periodically for passionate liaisons in Edinburgh (and that’s just the locale we know of). This is straight from the comics, where the two were a long-standing couple who have been married and had children. The way Infinity War presents their coupling is another strong story development.

When we catch up with them in Scotland, Wanda and Vision are both in hiding; Wanda is on the run with Captain America and his faction of renegade Avengers, while Vision must hide his romantic interludes with one of the world’s most wanted fugitives if he wishes to remain on the right side of the law himself. Along with Rhodey defying General Ross’ order to arrest Cap, this is an indication that the members of Team Stark are beginning to see the error of their ways. The Accords are forcing Vision to stay away from his true love, and in so doing are preventing him from exploring his humanity. He sided with Registration because of an algorithm he’d concocted, a series of ones and zeroes that brought him to a logical conclusion, but he never factored humanity into the equation, least of all his own. Now the government control he once saw as the only solution is keeping him a mindless, lifeless robot. (It’s not an accident that he only looks human around Wanda.)  Loving Wanda, and exploring that love, frees his mind, and he sees Cap and crew in a new light.

This is the big one. Everyone who’s read The Infinity Gauntlet was waiting to see if this horrifying moment would make it into the movie. It did, and it has just as much impact on screen as it did on the page. In both versions, Thanos – in possession of the completed Infinity Gauntlet – snaps his fingers and eliminates half the life in the universe, including some of the heroes. It’s powerful, it’s painful, and it serves as one of the biggest indicators of exactly what the good guys are up against. But, as has become their custom, Marvel Studios takes an event from the comics and goes their own way with it, exploring different ideas and character traits. This time, the difference is with Thanos.

In the comics, Thanos kills half the universe to impress a girl – in this case, Mistress Death. In the movie, he does it to save people from destroying themselves, to decrease the universal population to a sustainable level. Both of these motivations are wonderful because they make the biggest villain to menace the Marvel heroes relatable; Thanos is either a lonely guy desperate for the girl he loves to love him back, or a benevolent crusader taking it upon himself to do what others aren’t strong enough to do. While the comic book Thanos has a mirthful grin as he anticipates his romantic feelings finally being reciprocated, the movie Thanos is more satisfied with a job well done, having survived the onslaught arrayed against him and completed his noble mission. One version is empathetic, one version is sympathetic, and both are uncomfortably human.

It’s rewarding to watch the Marvel movies and see the comics that inspired them honored so reverently. And the movies aren’t slaves to the comics either; they take what will work and make it fit the story they’re telling, which is all fans really want. And because of their function on screen, these comic book callbacks are just as important for people who’ve never picked up a graphic novel. In the MCU, there are no small details.

Thanks for reading, everyone. Please give Fresh Geek Context a listen, and please come back to Geeks + Gamers for plenty more great content!